Steffy Is Shocked to Overhear Thomas and Sheila’s Secret

Tuesday, March 29, 2022: Today on The Bold and the Beautiful, Taylor gives Thomas pause for thought, Brooke pays Ridge a visit, and Steffy lays down the law with Sheila. 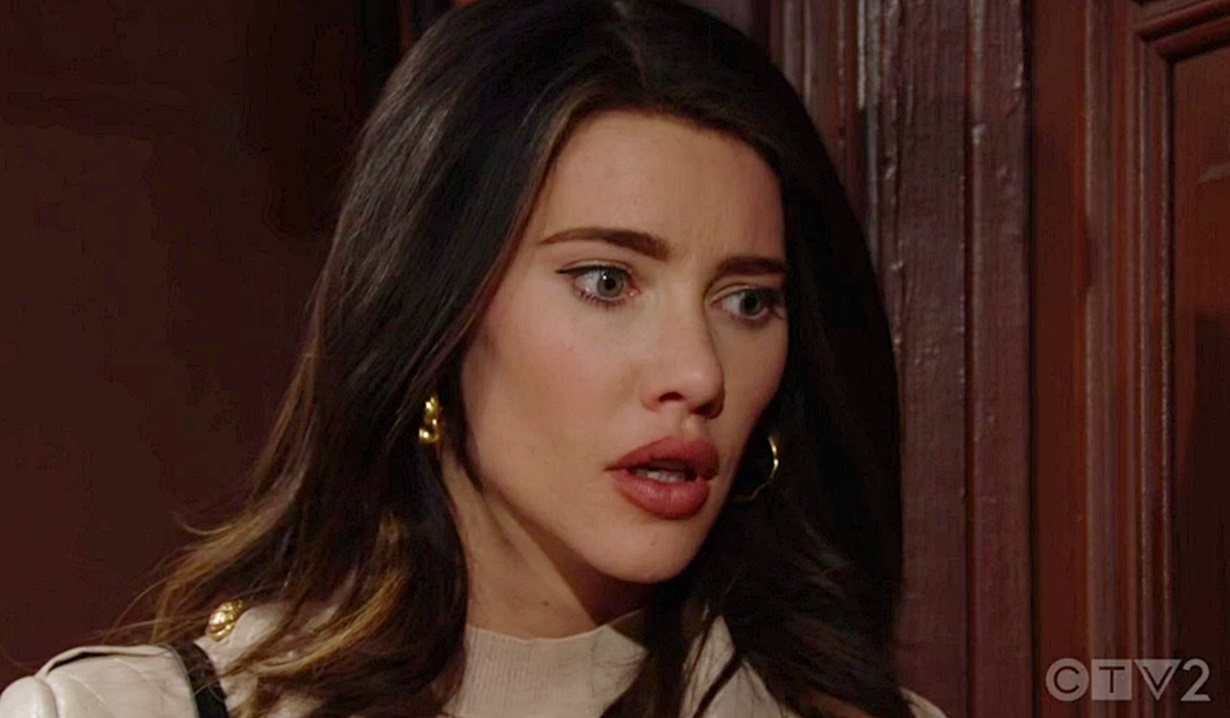 In Sheila’s hotel room, Steffy warns her she can’t lie her way out of this — she saw her and Thomas in the alley with her own eyes. She demands, “Answer me! What were you doing with my brother?!” Sheila dodges and Steffy calls her out on it. Sheila questions if she’s asked Thomas. Steffy barks, “I’m asking you. Now.”

More: When Calls the Heart spoilers

Sheila tells Steffy that her family is extremely important to her. Finn and Hayes are part of her bloodline. Steffy can’t wish that away. She wishes her daughter-in-law would let her prove herself to her the way her mother has. Steffy snaps, “Where does Thomas fit in.” Sheila thought maybe he could convince Steffy to give her a chance. Steffy retorts, “He can’t.” Sheila smiles and says she finally belongs to a family. She tells Steffy, “I love you all so very much.” Steffy declares, “That scares me more than anything.” 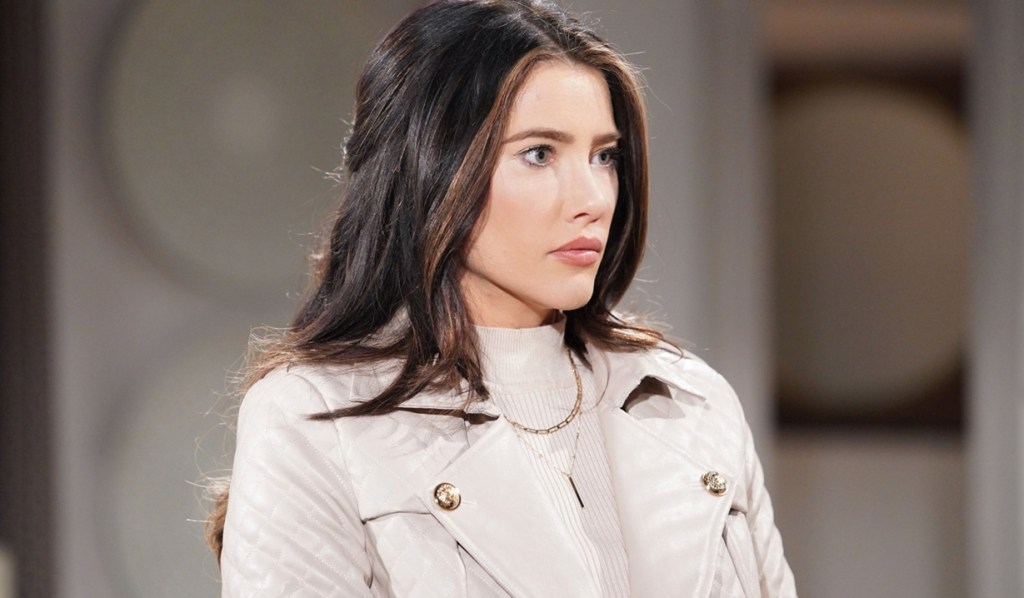 At Forrester Creations, Ridge questions what Thomas meant by telling him it’s his turn to look out for him. Thomas thinks he deserves happiness and if he can contribute, he owes him that. He sees his father with Taylor and the calming effect she has on him. Taylor walks in and smiles as Ridge says he knows Thomas believes he’d be better off with his mother. 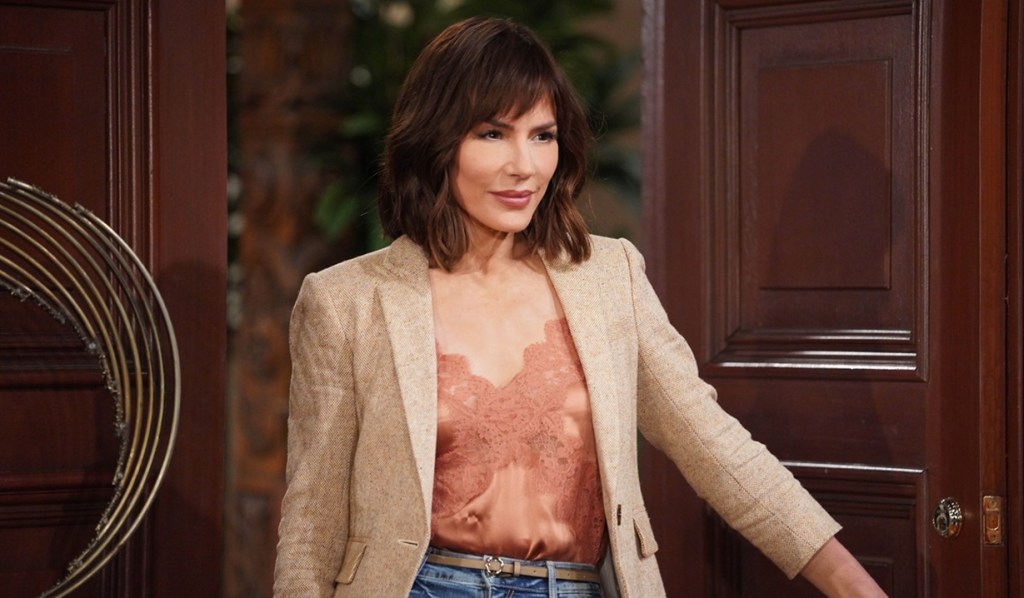 Taylor chides her son that this is their decision to make and they don’t need their children weighing in. Ridge teases that there’s worse things in life than spending time with her. She jokes, “Romance isn’t dead!” Ridge bustles off to a meeting and Taylor tells Thomas he’s not the only one who thinks she and Ridge belong together. Thomas assumes she means Steffy, but Taylor relays there is someone else. Someone unexpected. “Sheila.” Thomas’ expression darkens. 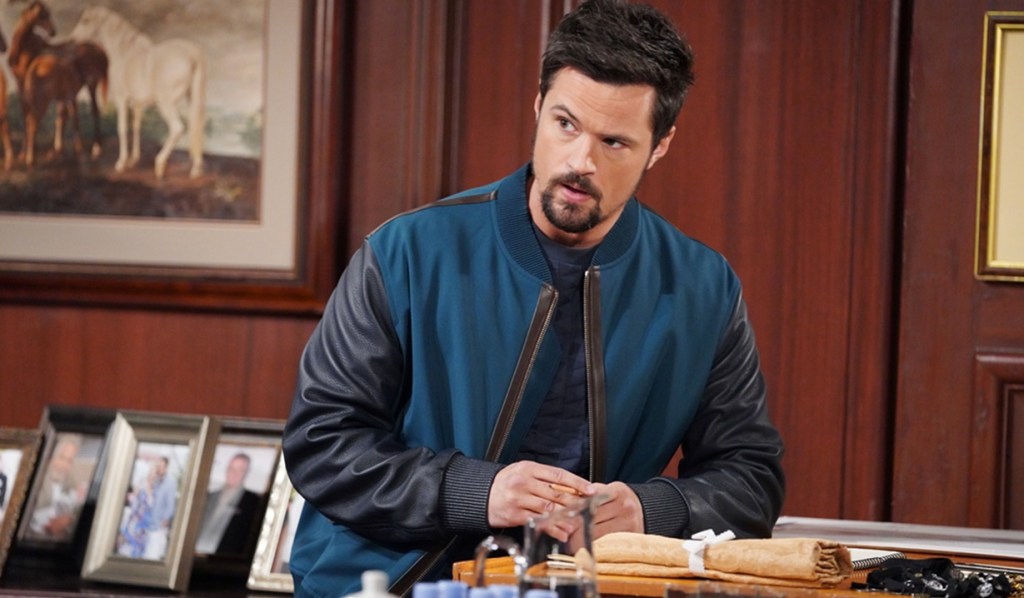 At Brooke’s place, she tells Eric he’s right — she and Ridge have been through so much. “It can’t end this way. It just can’t!” She marvels that she ended up in a position to lose her husband over Deacon. Eric feels they can’t change the past, but they can influence the future. As long as one person fights for a relationship, it won’t be over. He urges her to do what it takes to fix it. Brooke argues it’s hard while he’s over there at Steffy’s. Eric feels she shouldn’t let that deter her. Brooke recaps that everything was fine until she did what she did that night. “I just feel like there’s something… something more.” Eric’s confused. Brooke feels there’s an outside force doing whatever it can to keep her and Ridge apart! 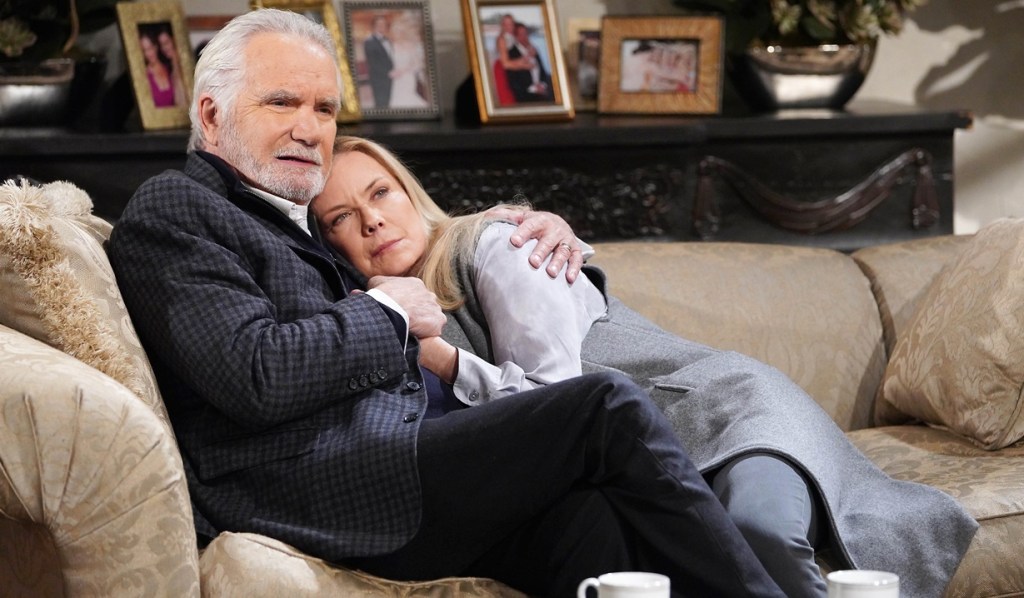 More: The Brooke story begging to be told

In Forrester’s design office, Ridge signs off from his meeting and flashes to hugging it out with Steffy, Thomas and Taylor as a family, and then to Brooke asking him to come home. Brooke enters the office — she had to see him. Ridge says he’s glad she’s there. He’s been thinking about her and them. Ridge is concerned about her being alone and wants her to be okay. Brooke says, “I want us to be okay.” She regrets offering him a divorce because it’s not what she wants. “I take it all back. I don’t want that. I want you to come home.” Brooke stresses the importance of working this out. She takes full responsibility, but she feels there’s an outside force that’s trying to tear them apart. They can’t let that happen. “This can’t be our fate!” 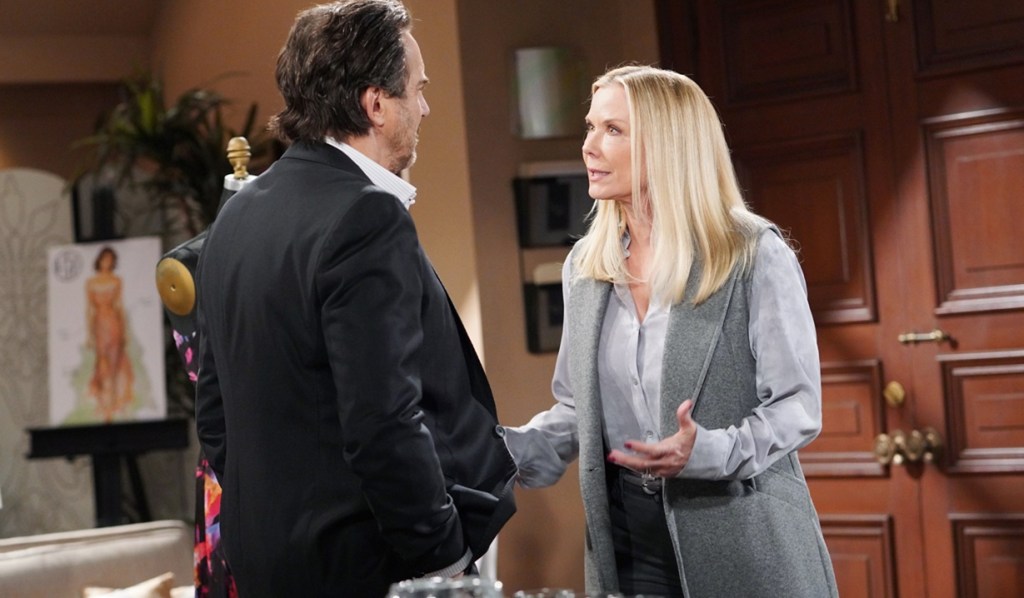 In the main office, Thomas learns that Sheila has been coming by his mother’s office regularly. She wants an ally and is trying to prove herself. Thomas doesn’t like the idea of Taylor being alone with her. Taylor muses about Sheila being a fascinating case study and how she watches her wheels turn between good and evil all the time. She has some animosity toward Brooke, but she told her to keep it in check. She thinks Sheila understands that they would stand behind Brooke against her any day of the week. “I hope she does.”

In Sheila’s hotel room, she reaches to touch Steffy’s hair. Steffy snarks, “Don’t touch me.” Sheila insists she loves her and will earn a place in Finn and Hayes’ life. She talks about one day taking her grandson to the park or the beach. Steffy immediately informs her that will never happen. She’ll never trust her. “You might as well make your way back to Genoa City.” Sheila points out she’s not reacting as she once would have. She’s been a friend to Steffy and her mother. Steffy sneers that she’ll never be a friend and needs to stay the hell away from her entire family! She walks out. Sheila grimaces. “If you knew what I had done, you’d be a lot nicer to me, Steffy.” 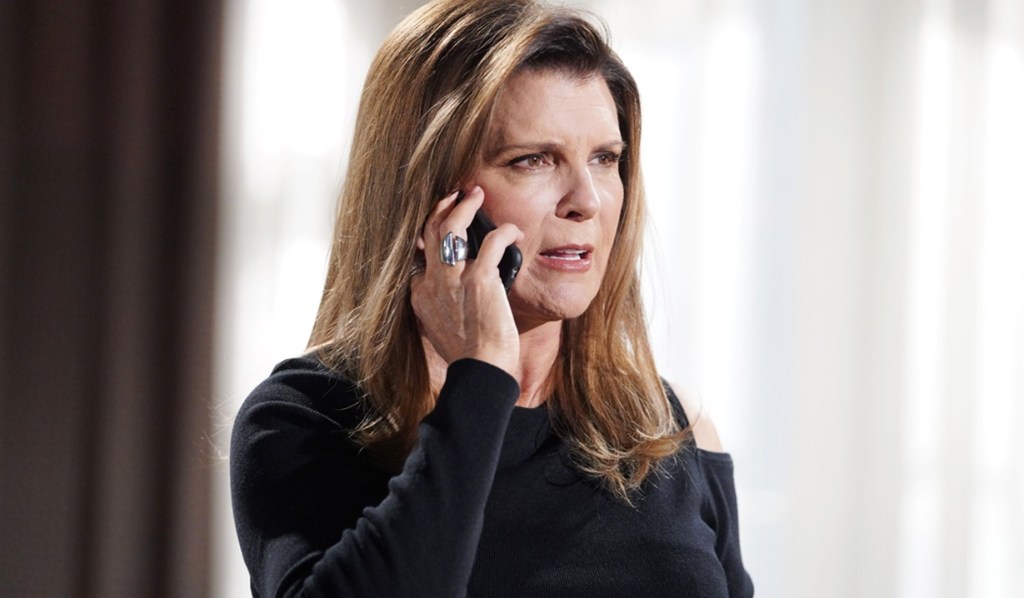 Sheila picks up her phone and calls Thomas, who reminds her she can’t call him whenever she feels like it — he’s at work. Sheila warns, “There’s something you should know.” Thomas fields an interruption before returning to the call.

Outside the office door, Steffy looms as Thomas tells Sheila he doesn’t think keeping this secret is the right move. She reminds him it’s to keep his parents together. Thomas won’t deny he wants that. He talks about what she did to Brooke — it was evil; diabolical. He goes over Sheila switching the labels out on Brooke’s champagne. “You poisoned her! That kiss with Deacon never would have happened.” Steffy grimaces as Thomas tells Sheila, “You were puling all the strings. You’re the one tearing apart my father’s marriage so you can have a place in Steffy and Finn’s lives.”

More: Is it the end for Sheila… or Steffy?!?

Next on The Bold and the Beautiful: Steffy informs Finn of Sheila’s latest transgression.

See if you agree with the best soap slaps, ranked in the photo gallery below. 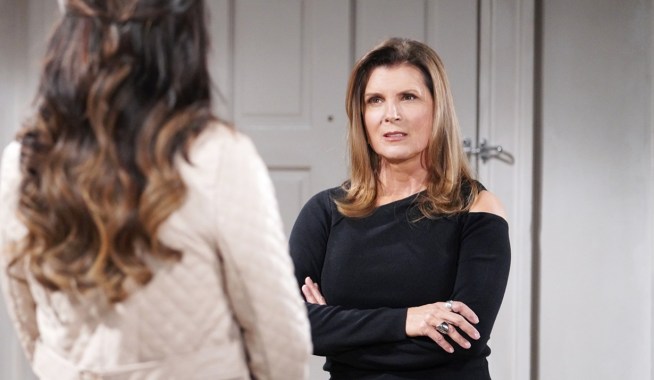 Sheila's Stunned When Steffy Shows Up at Her Door Demanding Answers 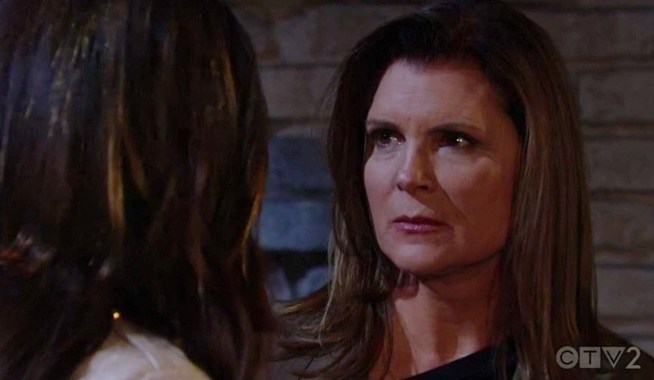