Monday, March 21, 2022: Today on The Bold and the Beautiful, Hope and Liam press Brooke to fight for Ridge, Finn surprises Sheila, and Deacon crosses paths with someone he hasn't seen for a while. 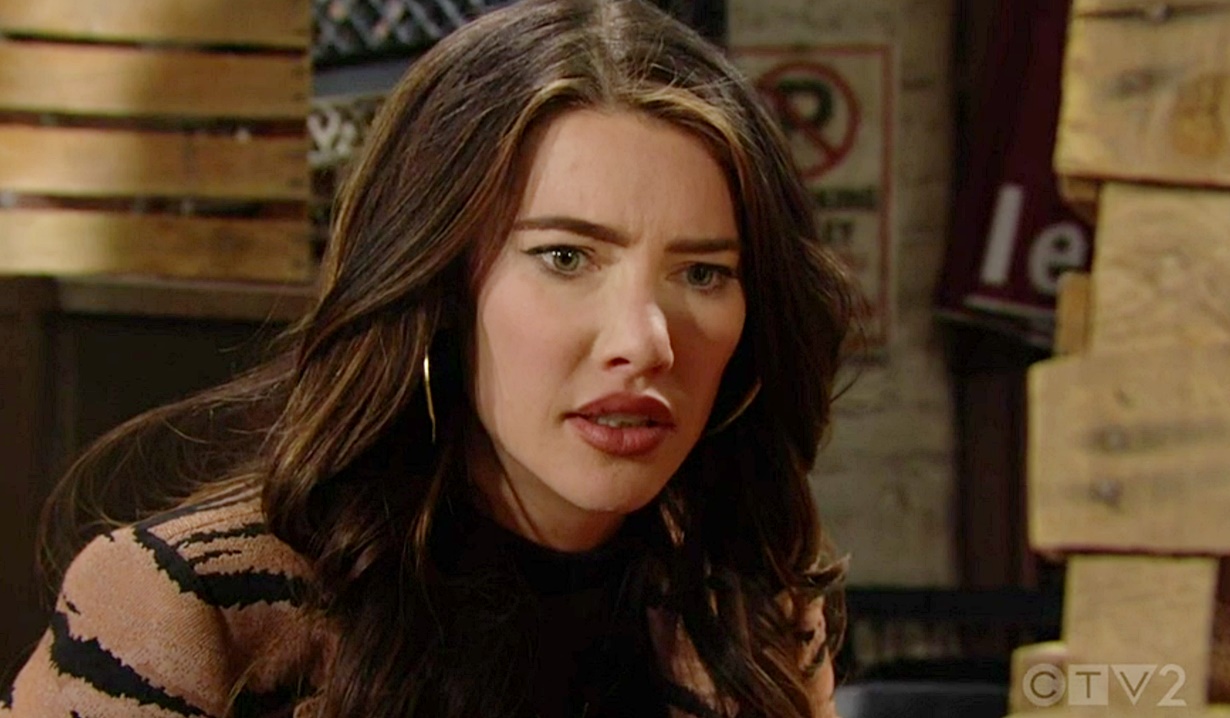 In the design office at Forrester, Steffy listens to Thomas’ side of the conversation as he’s on the phone with Sheila. He tells her they should meet in person… it’s either that or the alternative. Sheila doesn’t want him coming to her hotel, so they agree to meet behind Il Giardino. Thomas disconnects and Steffy walks in. “Thomas, what is going on?” she asks. She notes he’s been behaving strangely lately and now he’s had an intense phone conversation. Steffy’s starting to get worried and asks him to come clean about what’s happening. Thomas tries to put her off and says he’s doing the best he can to ensure their entire family is safe and happy. Steffy knows he’s as loyal to their family as anybody. Thomas has to go meet someone and says he’ll catch up with her later. He exits and after a beat Steffy follows. 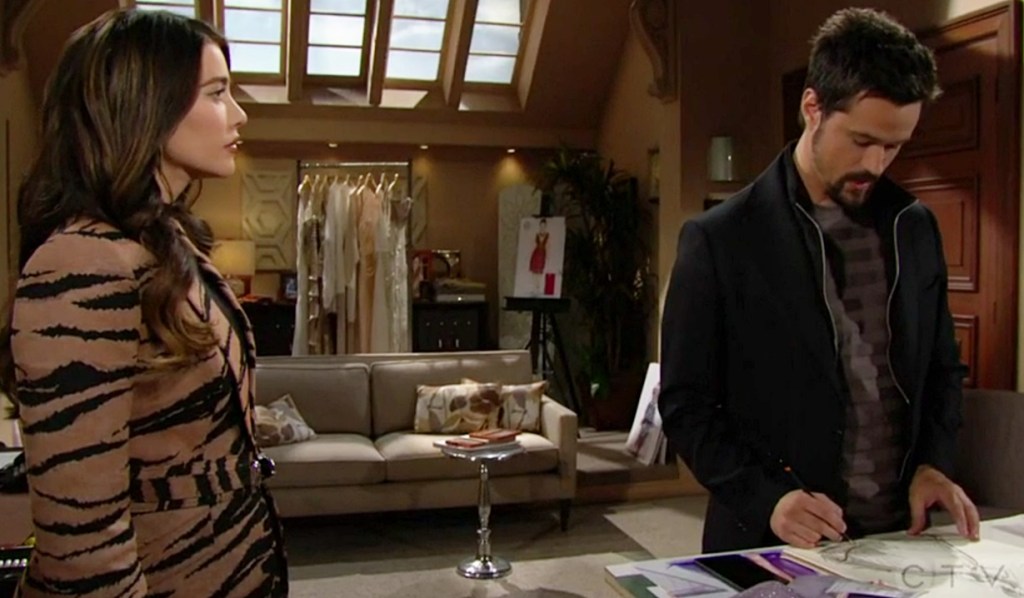 At her place, Brooke tells Deacon that she thought she was doing Ridge a favor by setting him free, but now she isn’t sure what she was thinking. Deacon crabs that he jumped ship to the other team. Brooke agonizes that she doesn’t want to lose him. Hope walks in with Liam and asks what’s going on. Deacon says her mother is having a bad day. Brooke rants that she can’t believe the predicament she put herself in. She’s destroyed her marriage and exclaims, “What have I done?” Hope decides they need to get someone in to help her, but Brooke argues the point. Deacon has learned that it’s never too late. Brooke still needs to fill in the blanks and put the pieces together about what happened that night. 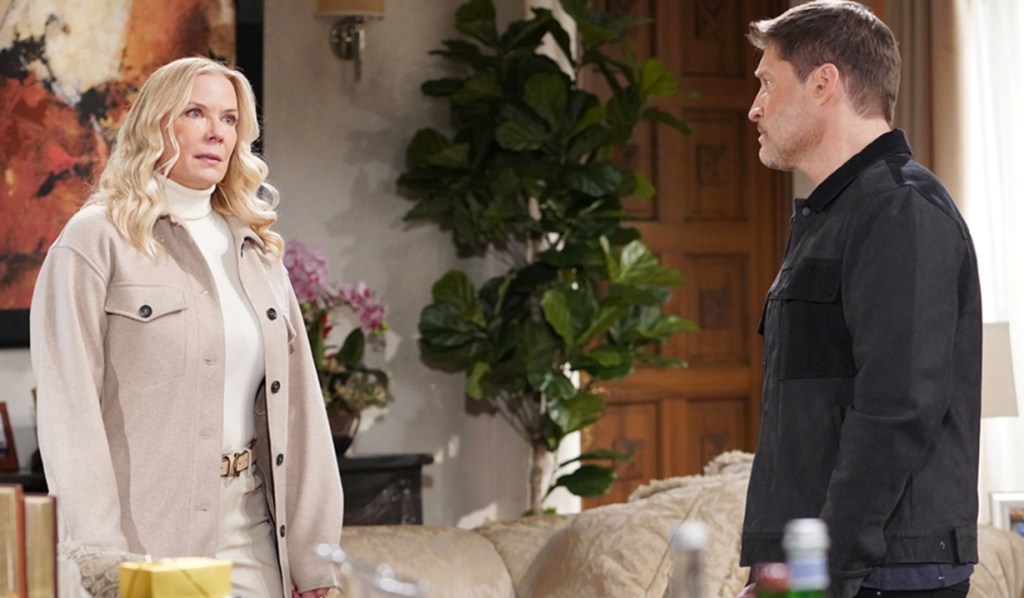 In her hotel room, Sheila runs through all of her confrontations with Brooke in her mind from past to present. A knock comes at the door — it’s Finn. Sheila is surprised, but pleasantly. Finn wanted to check up on her and explains he wants to believe he’s not creating anymore problems. 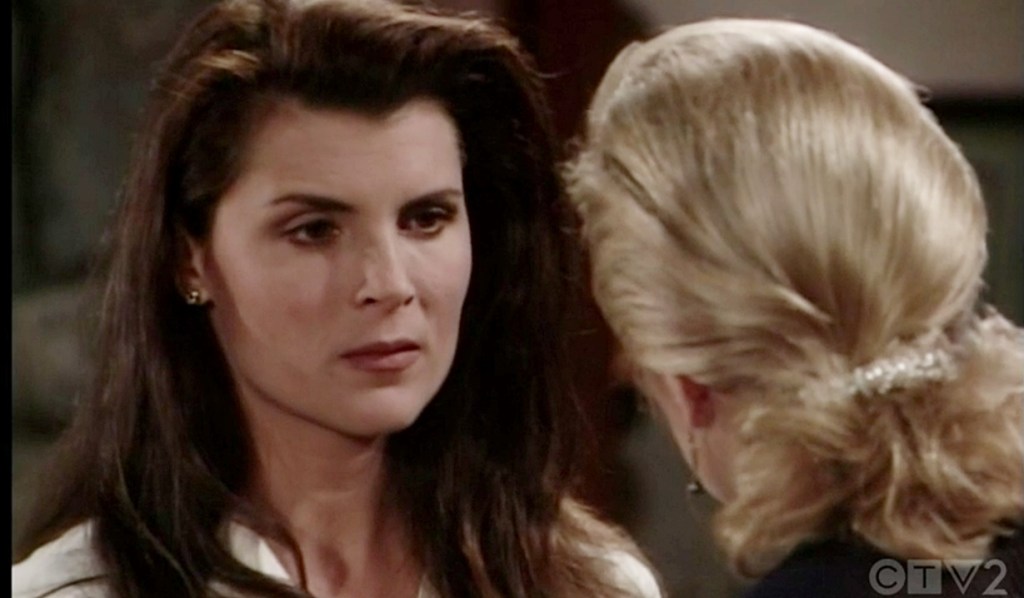 More: How Finn could lose it all

Finn knows she’s been making visits to Steffy’s mother and reminds Sheila she’s not just supposed to show up at her office. Sheila knows, but they have a great raport. Finn warns that Steffy’s family is his family now and they mean the world to him. Sheila counters that she’s his family too. They go over Steffy still having walls up when it comes to her. Sheila relays that Taylor’s been welcoming, so she’s hopeful things could change. Finn understands that, which is why he needs her to stay on the straight and narrow. Sheila beams when he addresses her as “mother.” They sit down and Sheila assures she won’t forget the mistakes she made, but everything she does now is geared to getting closer to him and her grandson. Finn has to keep her at arm’s length to protect his family. If she’s really reformed, however, he’ll try to get Steffy to relent. Sheila smiles and vows he’ll never hear anything about her that would let him down again. 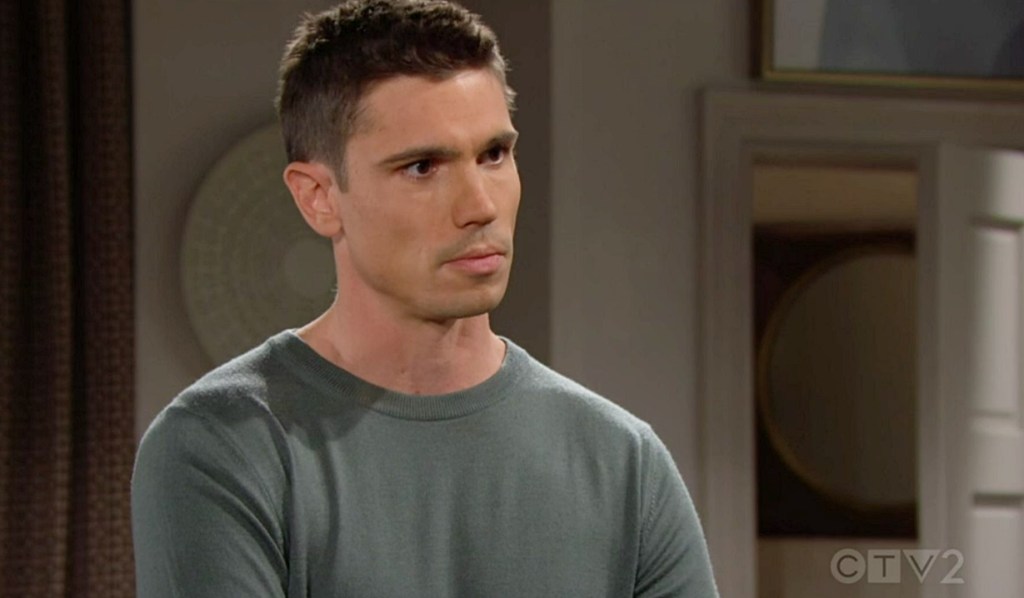 At Brooke’s place, Deacon has gone and Liam and Hope question if his visits are adding to her anxiety. Brooke denies it, but Liam suggests she take time alone with Sharpe off the menu if she really wants Ridge back. Hope feels her husband has a point. Brooke gets it. She didn’t invite Deacon there — he just showed up — the same way he did that night. Brooke questions why she couldn’t control herself then; something sinister took her over and she let it. She wants Ridge, but has to figure out a way to explain it all to him. 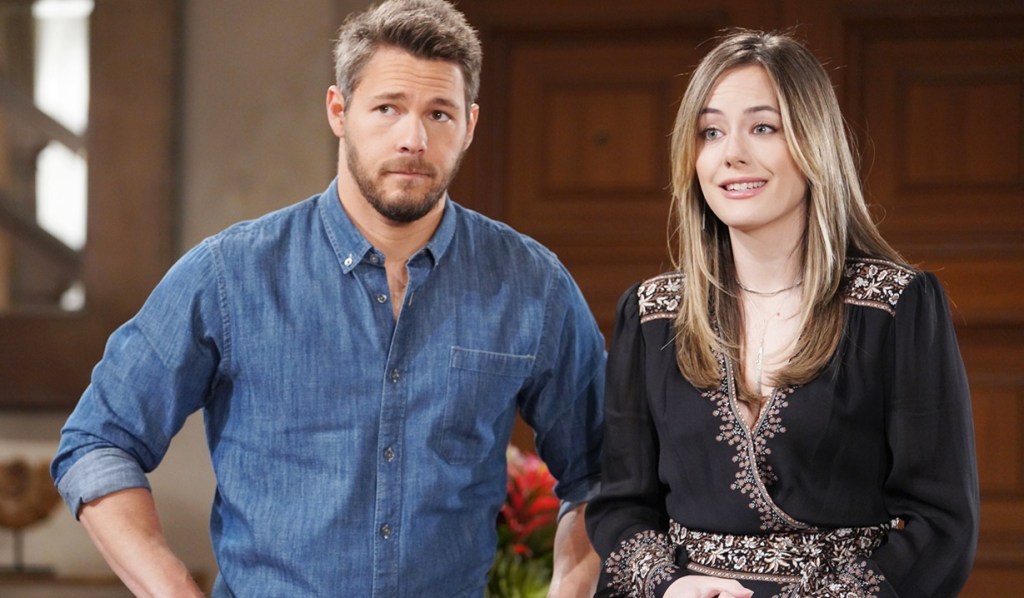 In the alley behind Il Giardino, Sheila assures Thomas that she never would have set up Brooke if she hadn’t interfered with her. She believes Taylor and Ridge should be back together, but Thomas confides that he’s torn. Sheila grits that he’s under Brooke’s spell and it’s time they broke it. Thomas wants what’s best for his father, but doesn’t know how much longer he can keep this under wraps.

Steffy walks into Il Giardino, where Deacon marvels, “Wow. Steffy Forrester… it’s been a while.” She explains she’s looking for Thomas and asks, “Have you seen him?” Deacon hasn’t seen him, but a bartender relays that he saw him in the alley when he took the trash out. 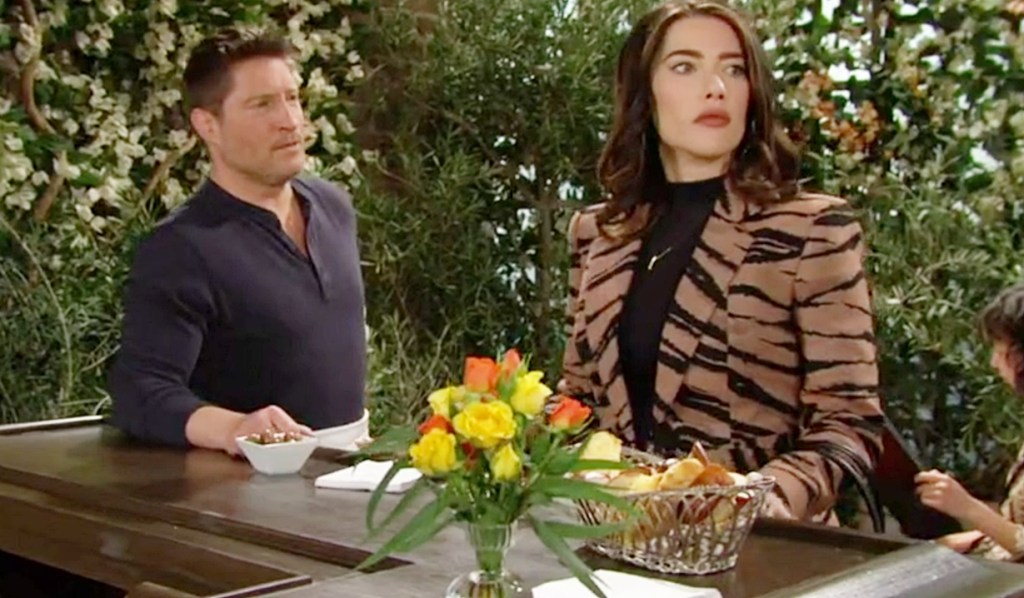 In the alley, Sheila warns Thomas he needs to keep their secret. He counters, “Don’t you mean your secret?” She argues that it’s their secret now. Thomas reminds her she’s the one who sabotaged Brooke. “What you did was messed up, Sheila.” She shakes her head. “You’re no saint.” Thomas doesn’t want to let his family down again. Sheila warns that’s exactly what will happen if he lets Brooke back into his father’s life. She doesn’t see the harm in allowing his parents to experience a new beginning together. Sheila goes on that Finn wants her to have a bigger role in his life. “After all these years, Thomas. We have been kept apart!” Behind a crate, Steffy silently creeps up and watches through the slats as Sheila tells Thomas to keep the secret and be a hero. Steffy mutters, “What the hell, Thomas? If you think I’m not going to find out what’s going on, think again.”

Next on The Bold and the Beautiful: Brooke recalls past moments with Stephanie.

Loving the flashbacks? Look back on photos of Brooke and Eric over the years in the gallery below. 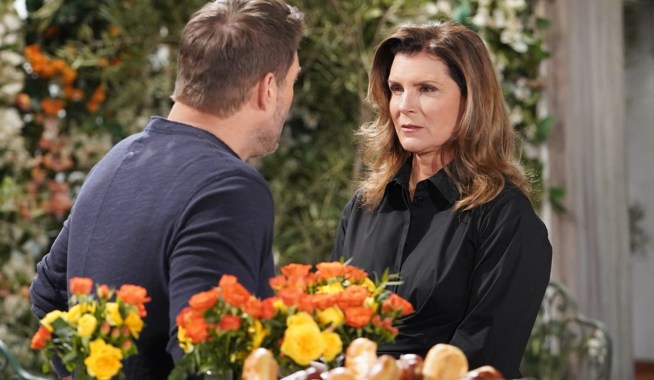 After Flashing Back to Stephanie’s Verbal Smackdowns, Brooke Implores Ridge to Come Home 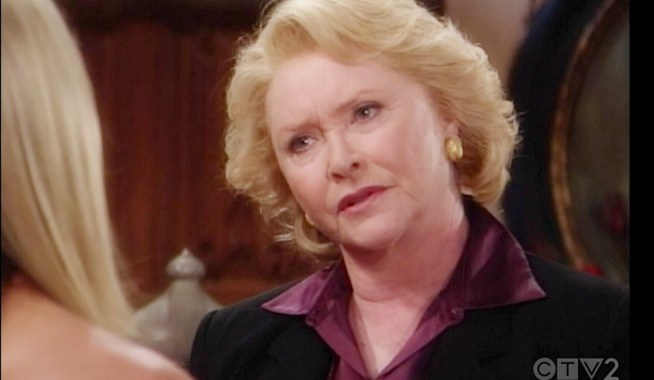