Tuesday, March 8, 2022: Today on The Bold and the Beautiful, Carter gets caught in an awkward situation, Taylor sets a boundary with Sheila, and Thomas returns to the hotel room. 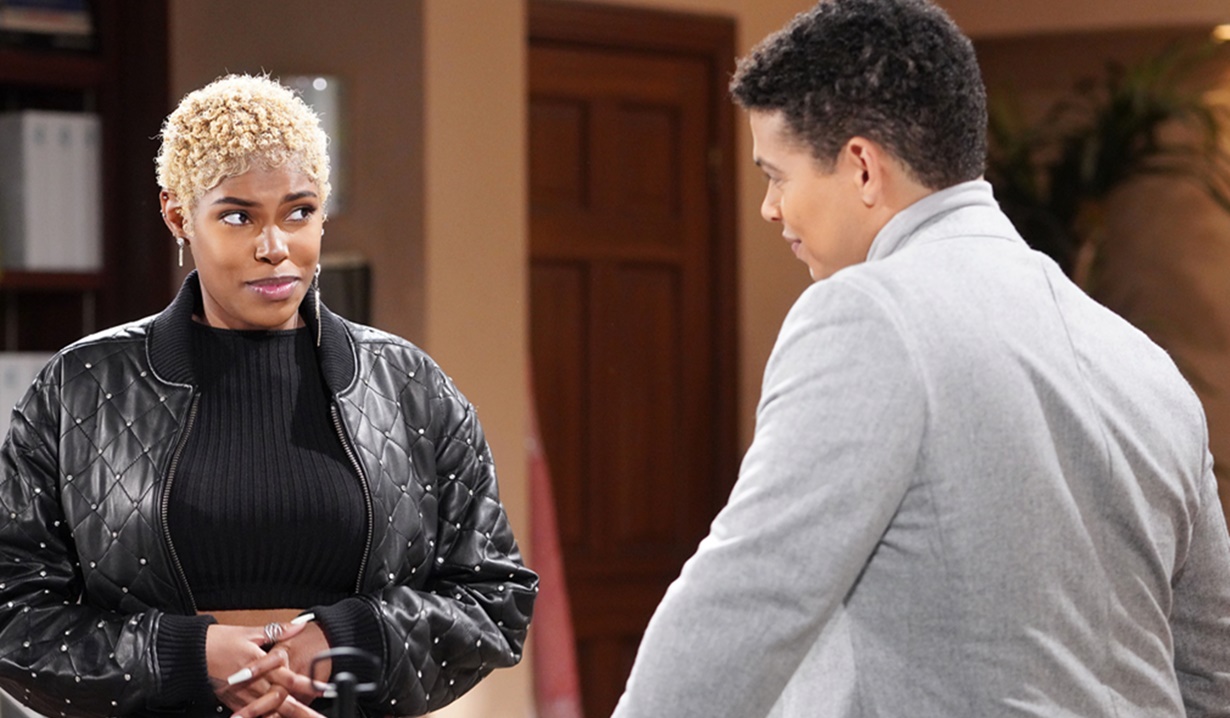 At Forrester Creations, Ridge urges Thomas to talk to him and asks if he’s hiding something. Thomas assures his father there’s no reason to be concerned; he’s just glad to see him happy with his mom. Ridge is grateful she’s in his life. He wonders if Thomas is doubting how much he cares for his mom. Thomas doesn’t, he just hopes things are going to be different — he always forgives Brooke for doing terrible things. Ridge declares that he’s right; it’s been like that his whole life. He thought this time it would be different, after Bill, but then Deacon showed up and Brooke slept with him in their bed and then defended him. He knows she was drinking but she’s not blameless. 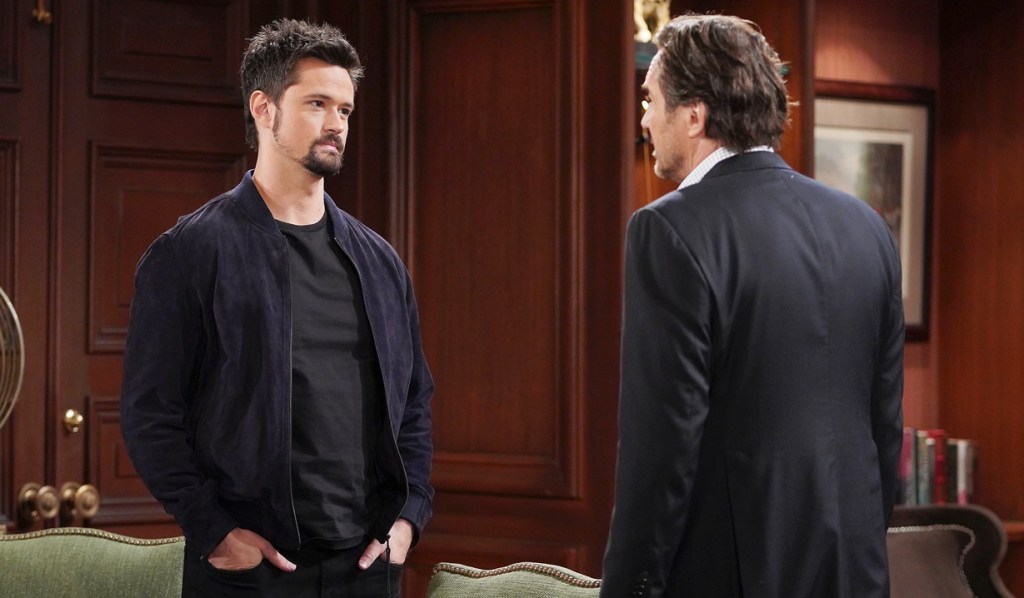 At her office, Taylor invites Sheila to sit down; she has a few minutes. Sheila ruminates about Brooke showing her true colors. She thinks Taylor must feel a little good about seeing her lose. Taylor denies it and says Brooke’s not well. Despite their differences, she’s concerned about her; something triggered her that night and spiraled her out of control. Sheila figures Brooke will probably never know. She thinks they should be talking about Taylor and Ridge coming back together after all this time. Taylor realizes Sheila is working to regain her trust, but she doesn’t feel comfortable with this — she needs to set a boundary. Sheila understands and assures Taylor she deserves the best; she deserves to win. “I’m really happy that you and Ridge are working your way back to each other.” It’s exactly the way she would have orchestrated it. 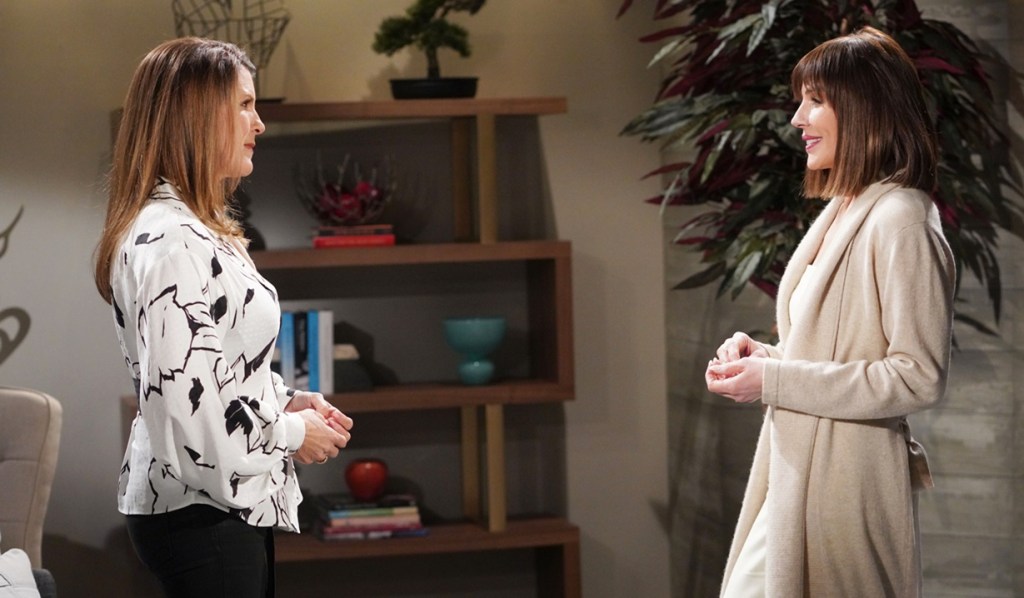 In the design office at Forrester, Zende shows Paris his new design and wants her take; she’s his muse and inspired the look. Paris doesn’t know what to say and wonders what Sequoia has to say and if he’s going out with her tonight. Zende asks, “Would it bother you if I did?” Carter comes in and Zende tells him what he asked Paris. “She hasn’t answered yet, but I think it’s pretty obvious.” Carter thinks this should be between the two of them, but Zende argues that he’s their friend and he needs his help. Paris sighs. “Zende, what’s going on?” Zende knows it doesn’t bother her that he’s seeing Sequoia, but he’s still getting used to things being casual with them. He does have one more question and asks, “Are you seeing anyone else?” He knows it’s not really any of his business, and that the only reason she knows about Sequoia is because she works in the same building, but he still would have told Paris. What he’s trying to say is that he still cares about Paris and hasn’t forgotten about her. “I hope you haven’t forgotten about me.” Carter awkwardly tries to leave again, but Zende stops him to say how much he appreciates his friendship. 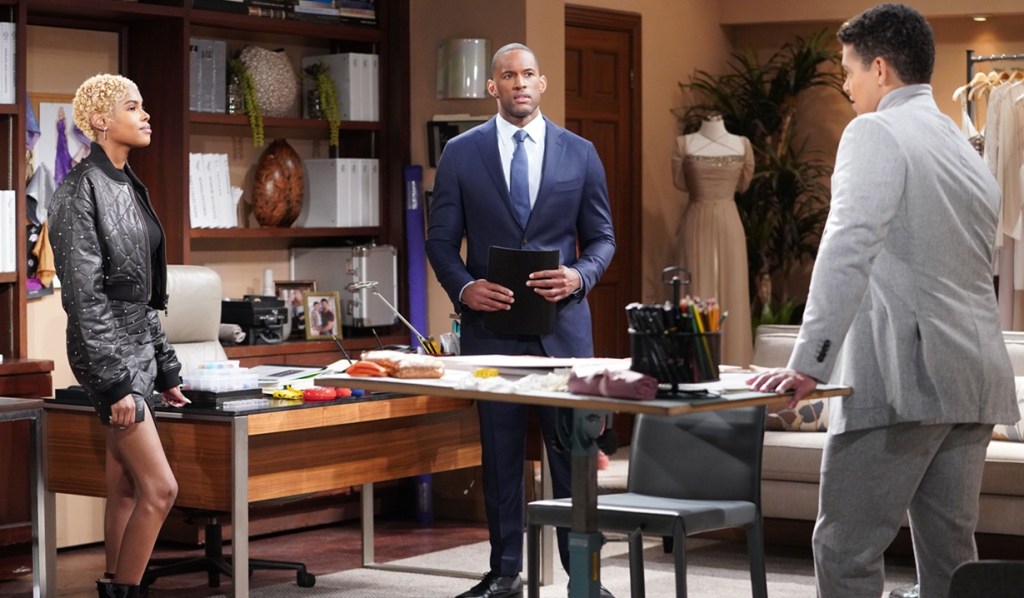 Later, Zende does a fitting on Sequoia, and Grace comes to the door and eavesdrops as they make tentative plans for that night, though Zende warns he has a deadline. She enters and hopes she’s not interrupting. Sequoia greets her and then leaves. Grace questions Zende about putting off the model because of a deadline; did he do that because he’d rather be with Paris?

At the loft, Carter agonizes over not telling Zende the truth and then flashes to making love to Paris. A knock comes at the door — it’s Paris. Carter opens the door and she says, “I just had to see you.” Carter warns her this is dangerous, her coming there. She can’t stop thinking about Carter and guesses he can’t stop thinking about her either. Carter looks into her eyes and protests, “Paris…” She husks, “Stop talking.” They kiss. 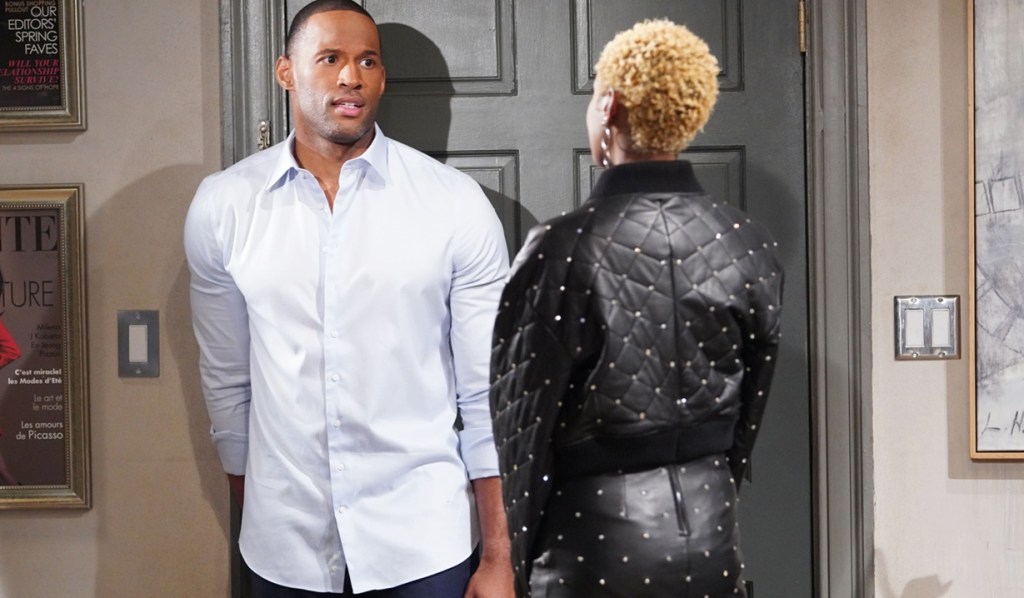 In her hotel room, Sheila paces and worries about Thomas telling Ridge and ruining everything. Thomas arrives at the door and Sheila lets him in while asking, “Did you tell him? Did you tell Ridge what I did to Brooke?” 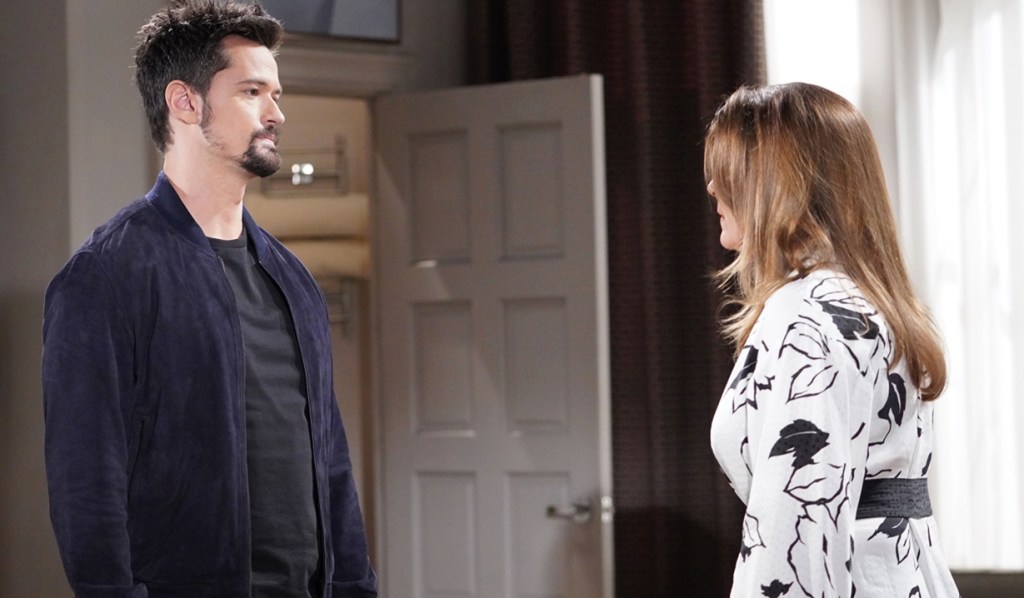 At Taylor’s office, she’s surprised when Ridge comes in with an air of urgency and says, “I had to tell you what I just learned.” Thomas told him that he’s so happy she’s back and that they’re spending time together. Taylor, flummoxed, asks, “That’s the big news?!” Ridge grins; he needed an excuse to see her. Taylor says he never needs an excuse and falls into his embrace. 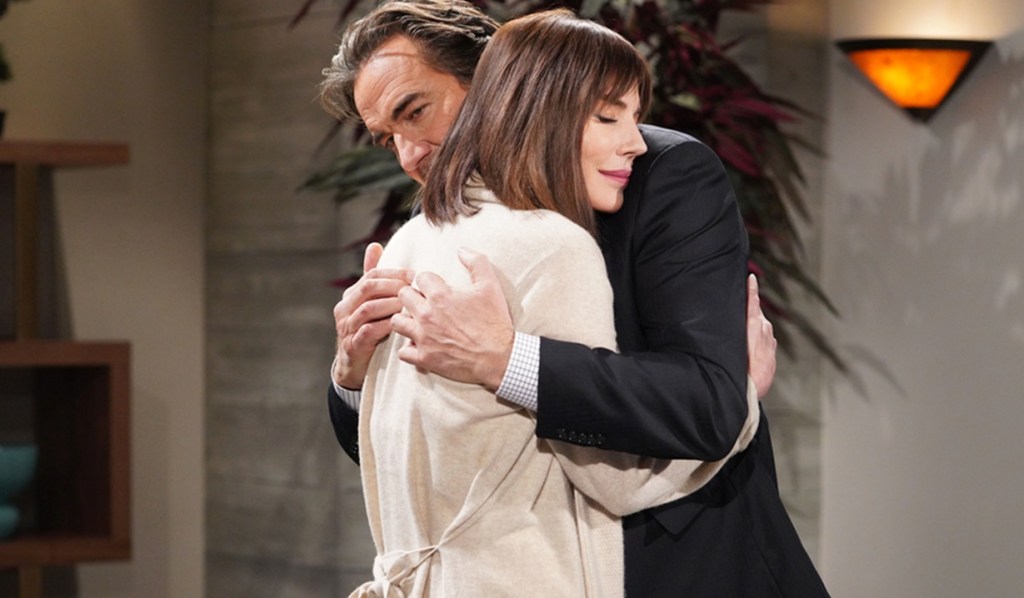 More: This Is Us: Does Kevin remarry Sophie?

In Sheila’s hotel room, she demands to know if Thomas told his father what she did. Thomas says, “No.” Sheila is relieved. They argue about her messing with Brooke’s sobriety. Sheila snarls that she didn’t make her kiss Deacon or snuggle with him in his father’s bed. She’s given them all a gift; they have a real shot at being a family again. “You’re welcome.” Thomas grimaces. “This is wrong.” Sheila asks, “Is it? Why can’t your mom win just once.” She tells Thomas he did the right thing keeping quiet and should keep doing so to give his parents the chance they deserve. “If you want your parents to have their happily ever after, then be smart and don’t breathe a word of this to anyone. You need to keep this secret forever.”

Next on The Bold and the Beautiful: Grace meddles in Paris’ love life.

On International Women’s Day, join us for a look at soaps most formidable females in the gallery below. 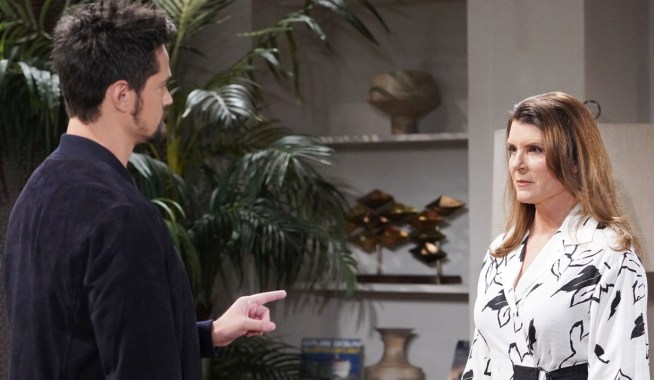 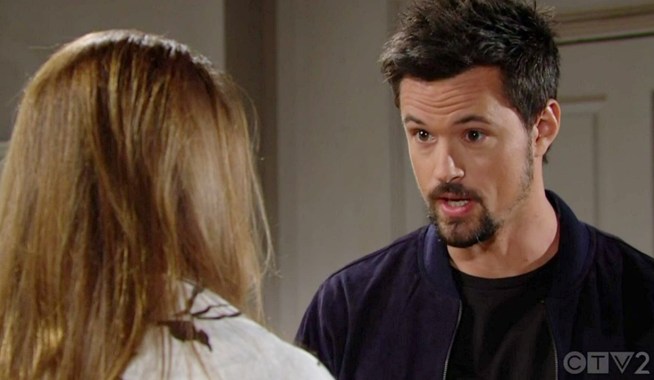