Thursday, December 2, 2021: Today on The Bold and the Beautiful, Steffy's taken aback by Finn's words, Paris reassures Carter, and Sheila pays her son a visit. 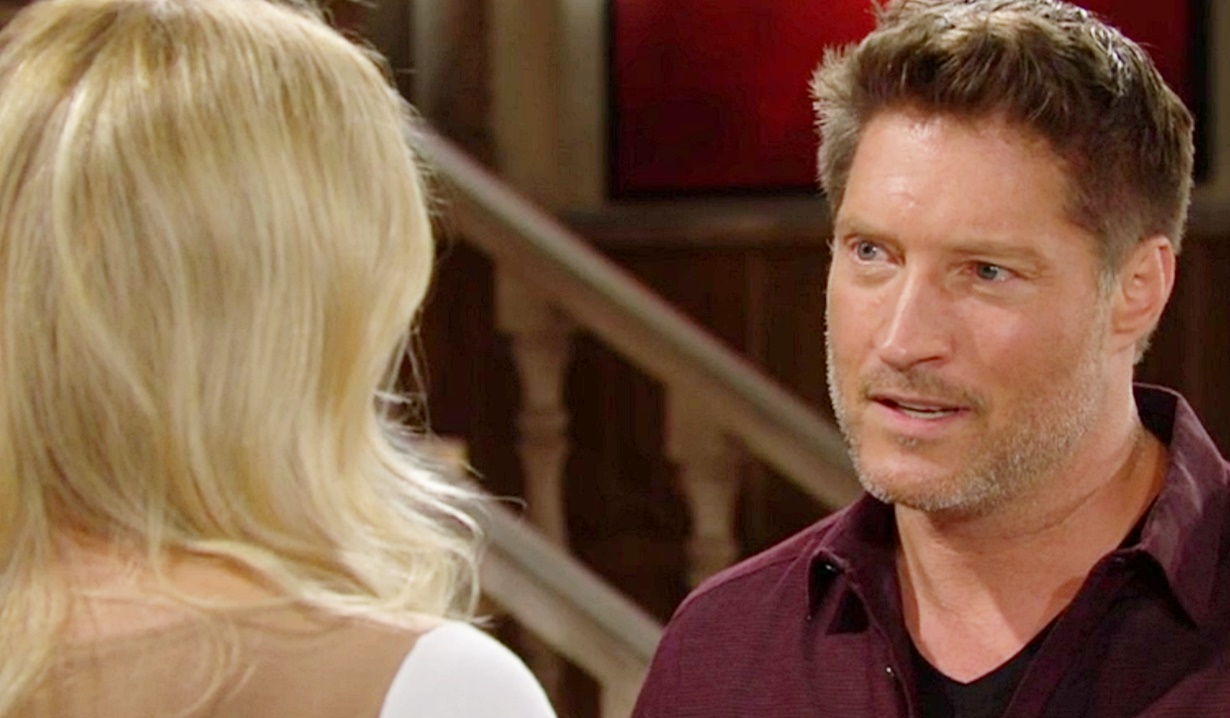 At Brooke’s place, Ridge complains about that man convincing her to let him do whatever he wants. Brooke says that man has a name. Ridge fumes that he knows — it’s Deacon Sharpe. He asks her again if she has feelings for him. He believes Deacon has an agenda to try and get her to think he’s a new and better man… and it’s working. He predicts that what comes next is pain and heartache, and he doesn’t want that for any of them. Ridge brings up their past again. Brooke has to live with how she hurt Bridget, but she doesn’t know why he keeps bringing this up. Ridge doesn’t want Deacon to hurt her or Hope ever again. 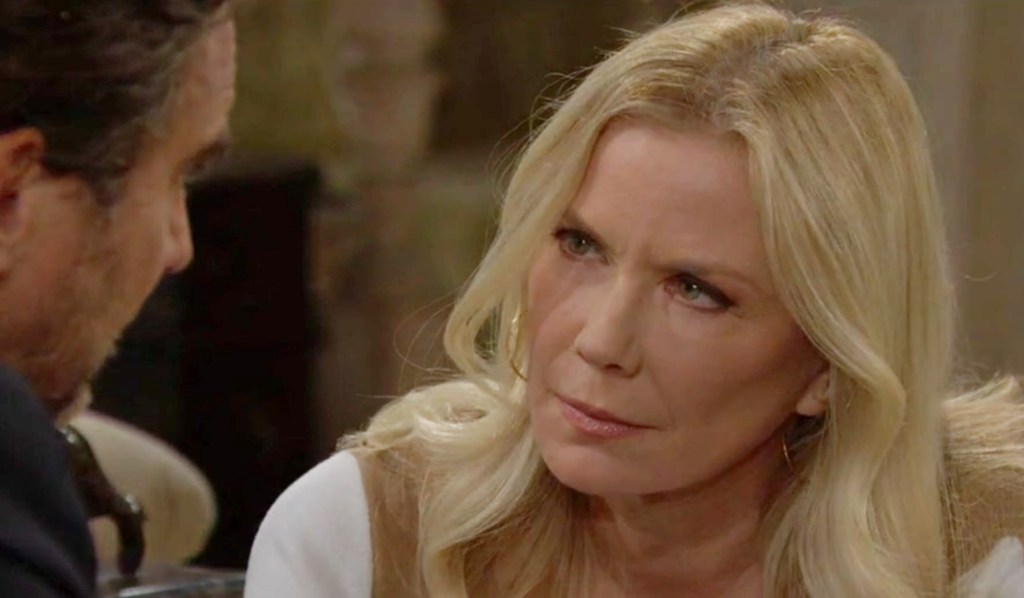 Deacon arrives at Sheila’s room disgruntled because he can’t find a job or his own place. Sheila complains that she can’t do anything thanks to Steffy. She rants about old grudges, but Deacon doesn’t want to hear it. He flips the script to Ridge thinking he can’t change and wonders if the guy really thinks he has some hold on Hope and Brooke. Deacon shrugs that at least Hope has welcomed him into her home and Brooke’s not giving him the cold shoulder anymore. Sheila marvels that just a few minutes ago he was so down on himself.

They talk about wanting relationships with their offspring. Sheila doesn’t know how to make that happen with that Rottweiler wife of his trying to run her out of town. Deacon nods; Ridge is trying to do the same thing to him. Sheila decides it’s time they take action, but Deacon warns he told Hope and Brooke he was cutting ties with her; they’re not joining forces. Sheila just wants to throw Ridge and Steffy off kilter… and she’s already got an idea brewing. 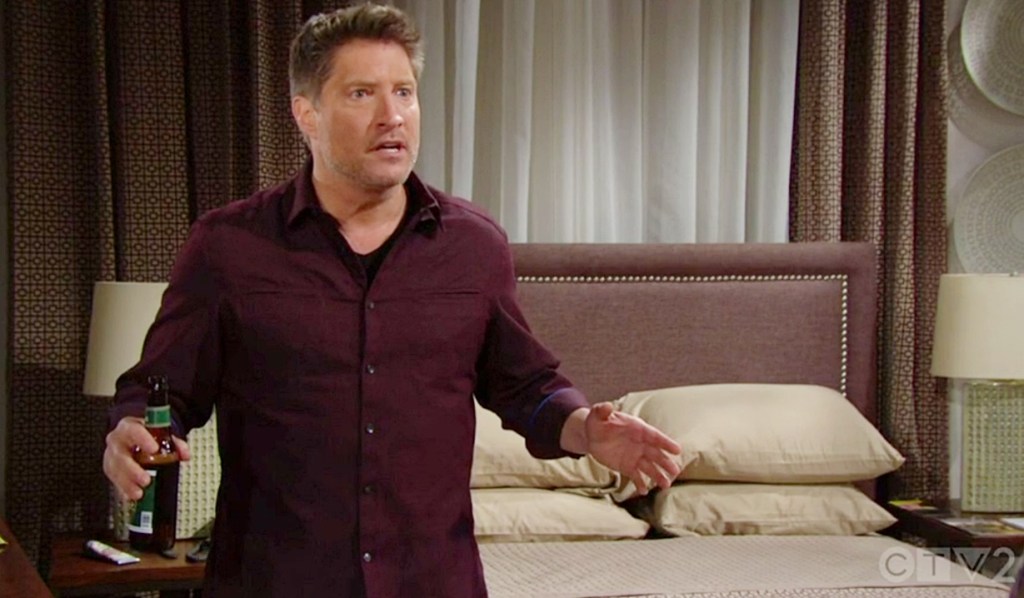 At Forrester Creations, Finn tells Steffy his father is still reaching out constantly, but he lied to him his whole life — can he ever really trust someone like that again? Steffy understands his feelings about the lies and deception. “Your father had an affair with Sheila.” Finn relays that Li told him Sheila was the one who pushed Jack to open up and come clean. Steffy questions why she didn’t tell him herself. Finn supposes she thought it should come from Jack. He notes that by pressuring his father, she was advocating for what she felt was best for him. Steffy insists Sheila only does things that benefit her. Finn just thought that maybe this one time… He breaks off. Steffy warns that Sheila will try to fill the void where Jack was and urges him not to let her take advantage of the situation. 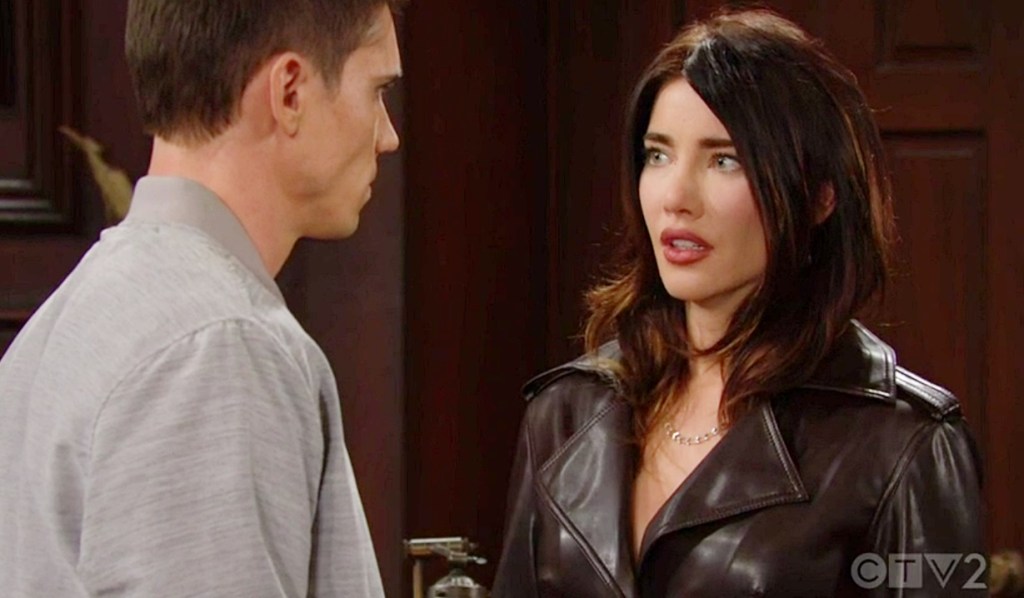 At Il Giardino, Paris broaches the topic of his original lunch date and muses about walking in on him and Katie, but Carter would rather focus on her. Paris jokes that he wants to help her balance her checking account. Carter admits that his lunch date was Katie, but she had to cancel because Bill scheduled a call with their son. It made him realize that he always chooses women who aren’t truly available. “Why do I keep doing that?” Paris knows Katie’s family is complicated. Carter glumly supposes that he’s just not good at relationships. 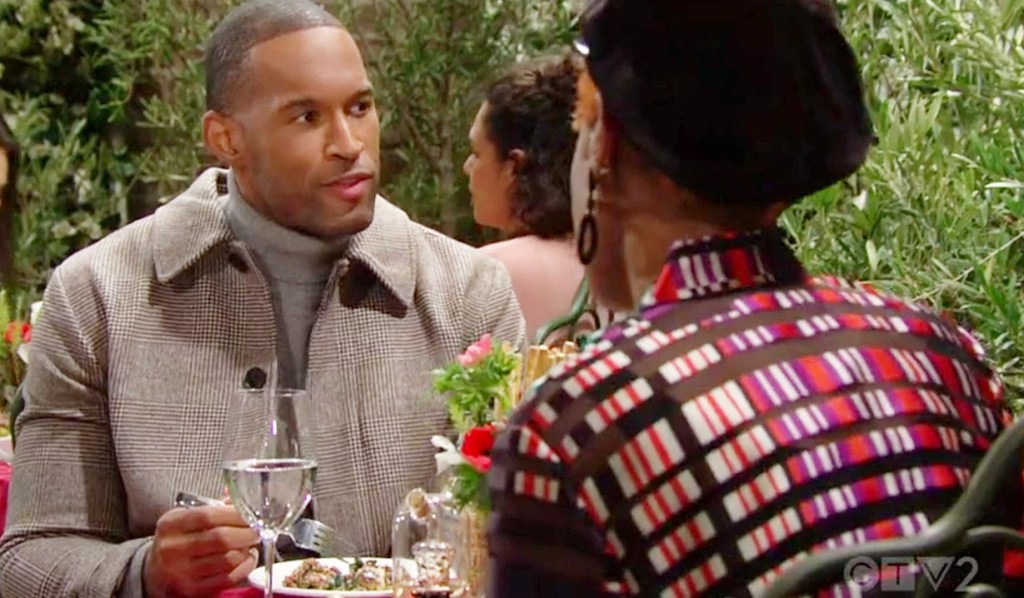 Carter then jokes, “I bet you’re glad you agreed to have lunch with me.” Paris surprises him by replying, “Actually, I am.” Carter recaps that whatever woman he’s involved with, it never ends well. Paris urges him not to put it all on himself. Carter’s just at the point where he has to take a long look in the mirror and see that the common denominator in these failed relationships is him. Paris doesn’t buy that he doesn’t have what it takes to have a successful relationship. She runs down his great qualities and notes he’s not hard to look at either. Paris is sure he will fall in love soon, he just hasn’t found the right woman to build a life with yet. 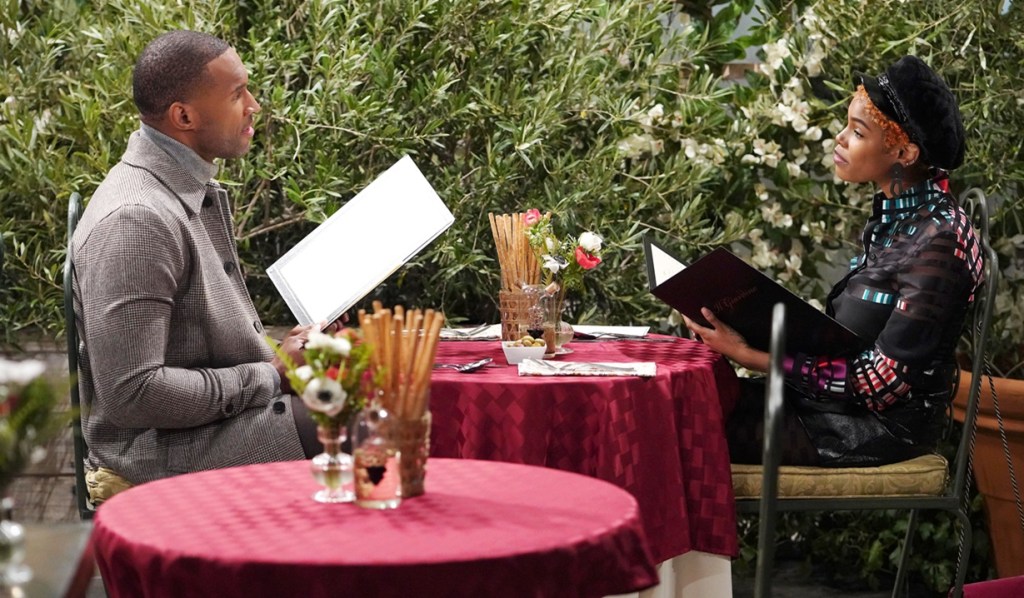 At Brooke’s place, she recalls the terrible shame from her affair with Deacon back in the day and reminds Ridge they weren’t even together then; he was with Taylor. She wants him to stop talking about it. Ridge will protect his family whatever it takes. He gets called away, but first tells Brooke, “I love you so much. Never forget that.” They kiss and he leaves. Brooke flashes back to an intimate moment with Deacon long ago. 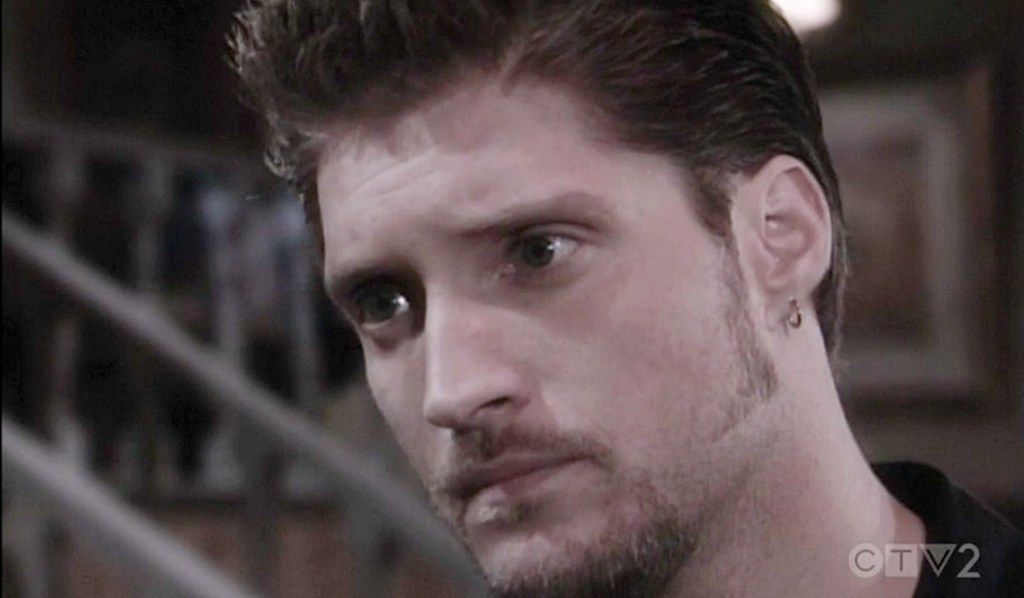 Suddenly, Deacon appears in the doorway — he waited until Ridge left. Brooke says it’s not a good idea for him to be there, but Deacon just wanted to thank her for letting him have a relationship with Hope. Brooke doesn’t want her to move, so she’s trying to be supportive. Deacon marvels that his dreams are coming true, and part of that dream was seeing her too. He knows it brings up difficult memories, but there were amazing ones too. “The attraction was nuts!” Deacon hates that they hurt Bridget, “But my God the passion; the connection we had. I haven’t forgotten one moment of that. Tell me it’s the same for you. Tell me you haven’t forgotten either.”

Finn’s hard at work in his office when Sheila strolls in. He assumes it’s his secretary, but she says, “It’s your mother.” She just wanted to talk to him, especially after him finding out about Jack and that they were involved. “I was worried about you sweetheart, and wanted to make sure you were okay.” 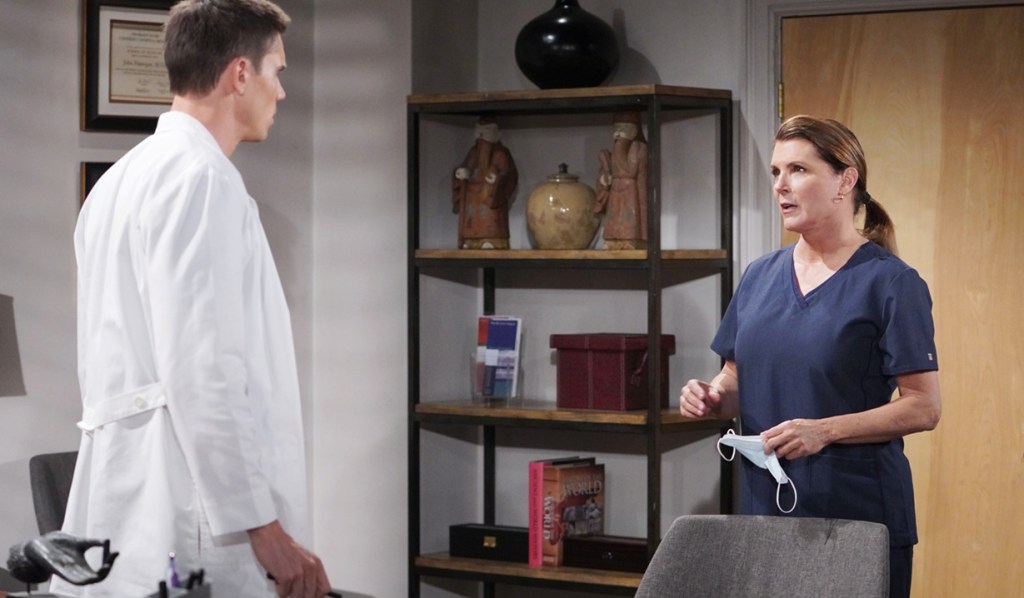 Next on The Bold and the Beautiful: Ridge reaches his breaking point and Brooke makes a decision.

Logan-palooza! Climb the Logan family tree in our photo gallery below.

Ridge Demands to Know if Brooke...

Ridge Throws Hope Out of the Cabin,...