Brooke Defends Deacon to Ridge, Who Walks Out and Predicts ‘This Is Not Going To End Well’

Tuesday, November 30, 2021: Today on The Bold and the Beautiful, Hope squares off with Liam and Steffy, Deacon makes an appeal, and Hope thanks Brooke for her support. 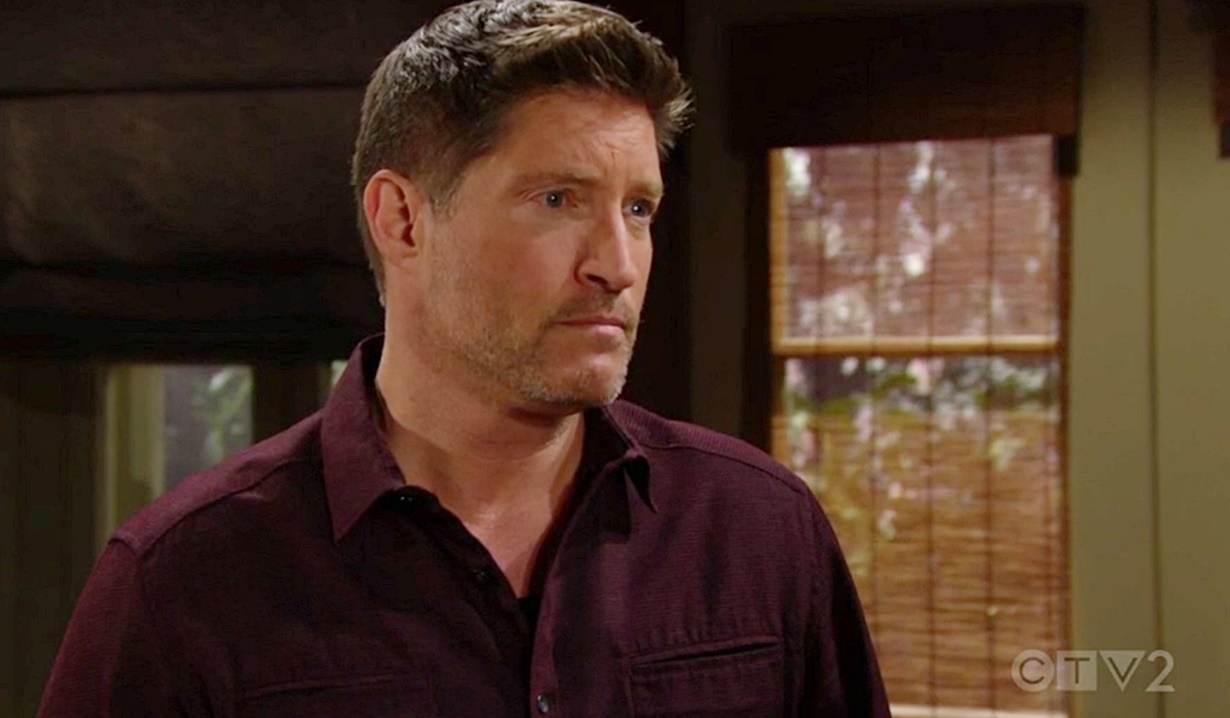 At the cabin, Ridge demands Brooke ask Deacon to leave, and Sharpe asks if that’s what she really wants. Ridge pressures that things are only going to get worse and again challenges his wife to ask Deacon to leave and not come back. Deacon appeals to Brooke that Hope trusts him and she can too. Ridge decides he’s heard enough and grabs Deacon to steer him out the door. Brooke intervenes by telling her husband that’s enough and to leave him alone! 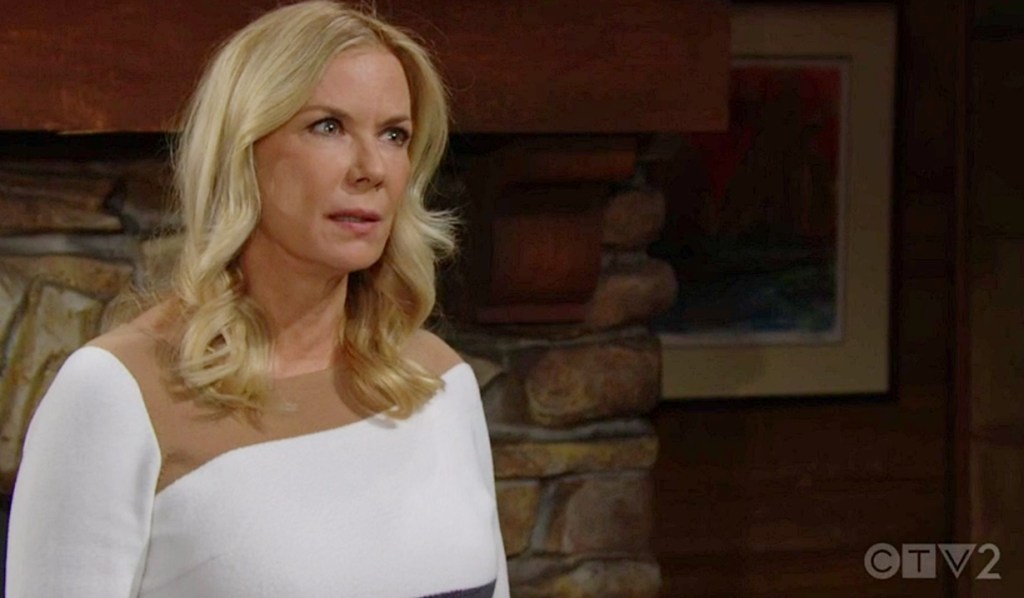 Deacon points out that Hope welcomed him in; Ridge is acting as though he broke into the damn place! He warns if Ridge keeps pushing him out, he’ll force Hope to make a choice. Ridge wonders what the great Deacon wants now. He recalls how Deacon convinced Brooke to betray her daughter Bridget. He doesn’t want his wife to get hurt and barks at her, “Look at me. Why is that so hard to understand?”

At Forrester Creations, Hope reminds Steffy that Liam is her husband and what happens in their marriage and family is their business. Just as Steffy asked her to respect her boundaries with Sheila, she’s asking her not to interfere in her marriage to Liam. Steffy argues that she’s not interfering in her marriage, and Liam interjects that Steffy is worried like the rest of them. 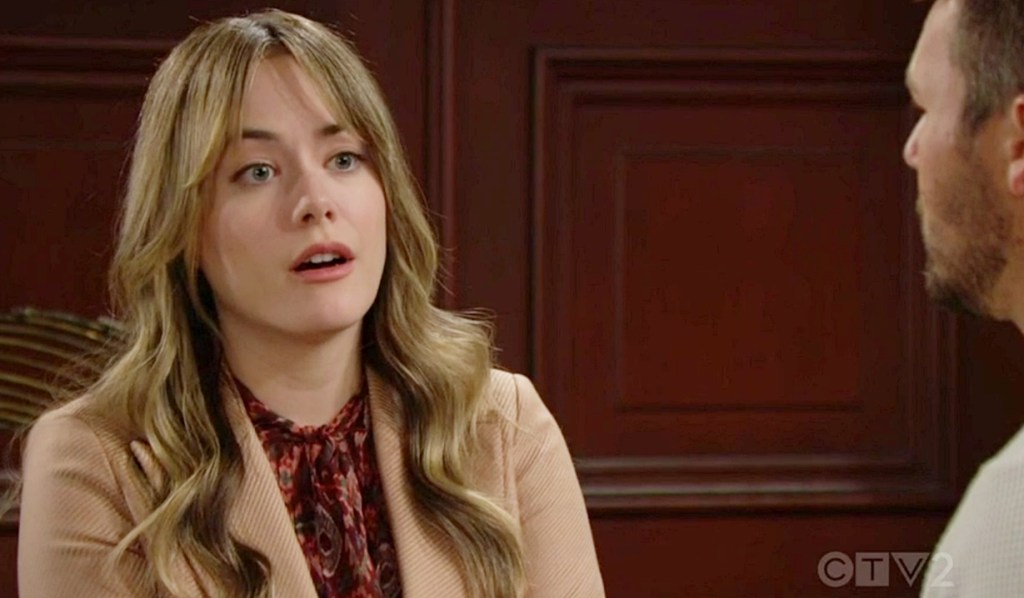 Steffy is concerned that Deacon will hurt Hope, but Hope’s not worried about that at all. Liam points out that’s the problem. It’s best if Deacon leaves town and doesn’t come back. Hope states that if she wants her father in her life, he will be. Liam reminds her she’s making that decision for more people than just herself. Liam argues they have the children to think about; shouldn’t that be their priority. Hope would never endanger her kids and doesn’t want them to think that people can’t change. 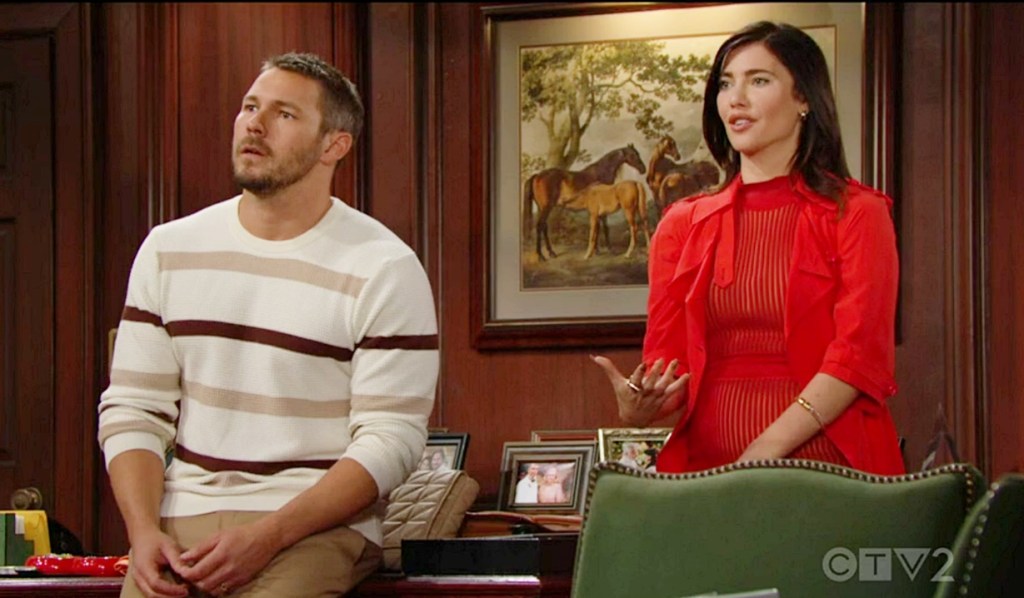 Steffy marvels that Hope is usually reasonable. “You should just listen to Liam.” Hope tells her husband that this is going to get worse if he keeps treating her father like a monster — he’s a person, who wants connection, and she’s determined to give him that. They bicker as to how Deacon differs from Bill. Steffy insists she gets it; she’s in the same situation with Finn and Sheila. Hope retorts that her father is nothing like Sheila. Steffy says it’s still the same tension. She questions if it will be worth it. What if Deacon starts drinking again? Does Hope really want that around the kids? Liam reminds Hope he just left jail, but she explains that’s why she wants to give him stability. Liam likens to Deacon being a hurricane; they need to get out of his way. He doesn’t understand why Hope’s not hearing him. Hope is hearing that he doesn’t trust her judgment, which is more than hurtful, it’s disappointing. She walks out. 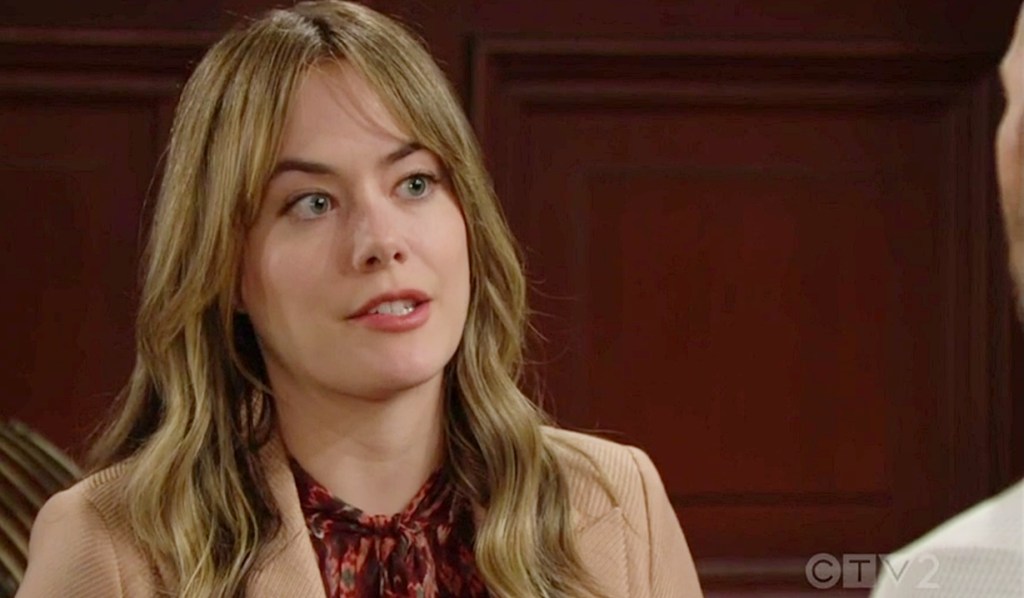 At the cabin, Brooke tells Ridge she can’t shut Deacon out if it means pushing Hope away. If they don’t allow him into their family she’ll take Liam and the kids and move away. Ridge complains that everything was fine until Deacon got there. Brooke wonders what if Hope is right and her father has changed. Deacon would like to prove it. Ridge invites him to do just that by leaving. Deacon knows Brooke sees it. Ridge orders her to tell him he’s wrong. Brooke sighs, “Ridge can we just talk about this?” Ridge decides to go, but warns this isn’t over.

More: Soap news you may have missed

In the office, Liam and Steffy agree again that they are right about Deacon. Ridge comes in and they relay what happened with Hope. He stuns them by telling them that Deacon was in the cabin and Brooke defended him. He’s starting to wonder if Deacon is only there to reconnect with his daughter.

In the cabin, Deacon tells Brooke, “You could have gone after him.” She sighs that wouldn’t change what Hope wants. Deacon doesn’t want to cause problems, he just wants a relationship with Hope, who has put so much faith in him. “So have you.” Hope comes in as he tells Brooke he raised their daughter to be the most forgiving person he’s ever met. She says it means a lot that he’s fighting to be a part of her life. Deacon regrets not being there for her when she was growing up. He’s there now. This may be his last shot at redemption and no one is going to take that away, including Ridge. 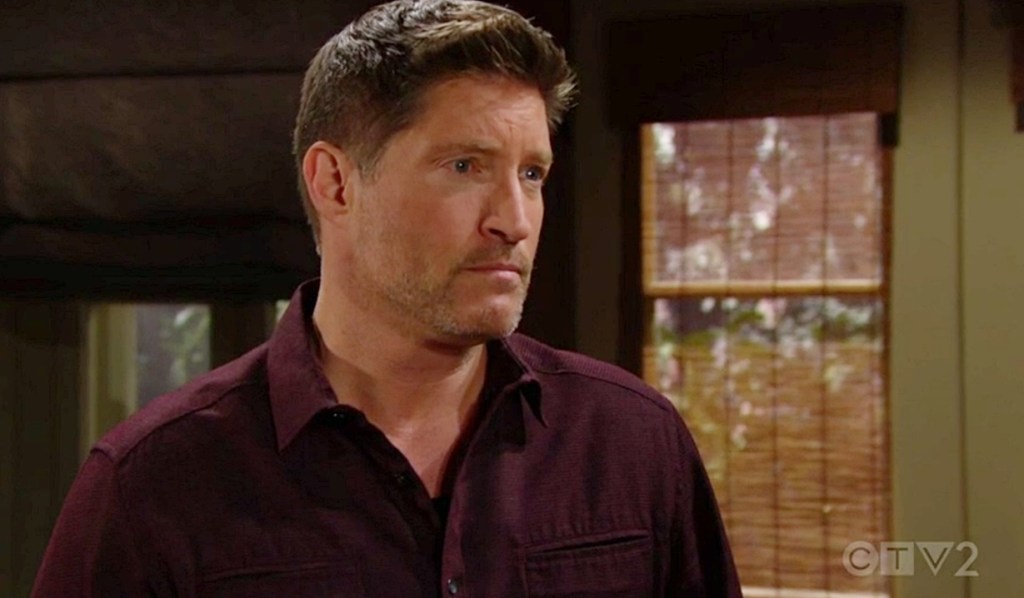 Brooke explains to Hope that Ridge was there and tried to throw Deacon out. Deacon relays that her mother defended him. They share a laugh of amazement over what Brooke said to Ridge, and Hope expresses how grateful she is . “I need your support mom, and dad does too.” They embrace. Brooke smiles at Deacon. 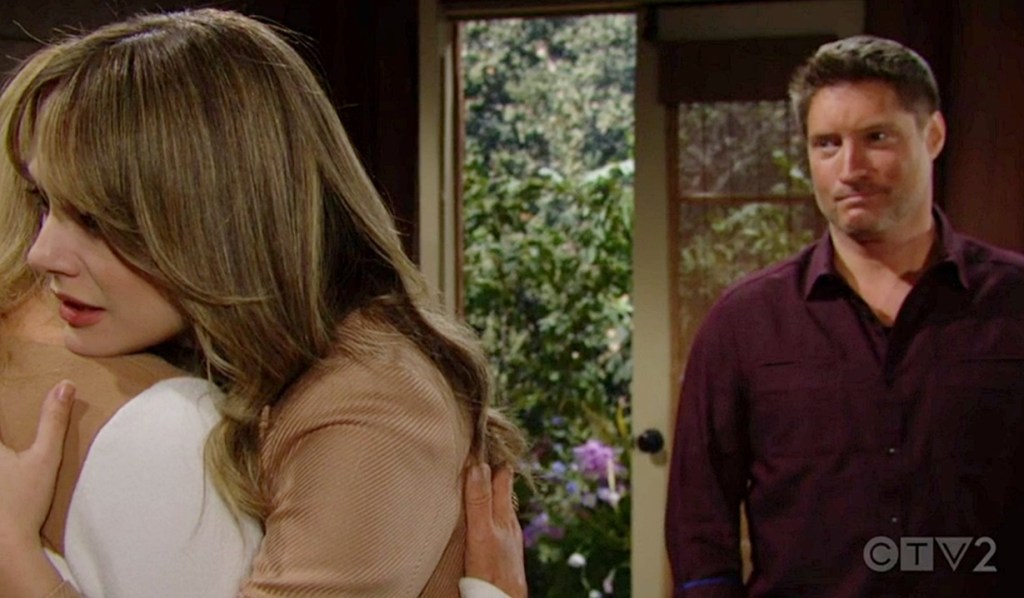 In the office, Ridge tells Steffy and Liam that Deacon’s getting in Brooke’s head again. “This is not going to end well.”

Next on The Bold and the Beautiful: Brooke finds herself at odds with Hope, Ridge and Deacon.

Brooke is no stranger to outbursts and scenes, in fact, she features more than once in Bold & Beautiful’s most memorable rivalries photo gallery, as seen below. 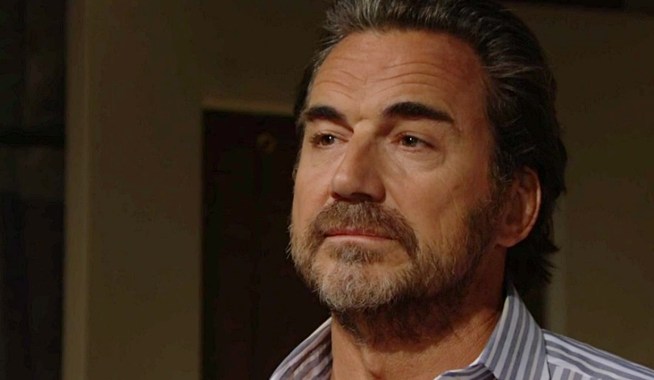 Deacon Squares off With Ridge, Who Demands Brooke Back Him up and Throw Her Ex Out

Ridge Demands to Know if Brooke Still Has Feelings for Deacon 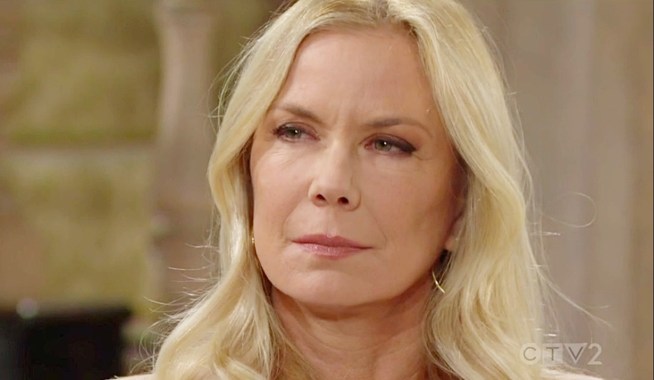