After Donna Accidentally Reveals a Secret, Quinn Overhears a Conversation Between [Spoiler] That Leaves Her Livid

Thursday, October 28, 2021: Today on The Bold and the Beautiful, Donna reveals too much, Brooke pays Eric a visit and Thomas notices the strong bond forming between Zende and Paris. 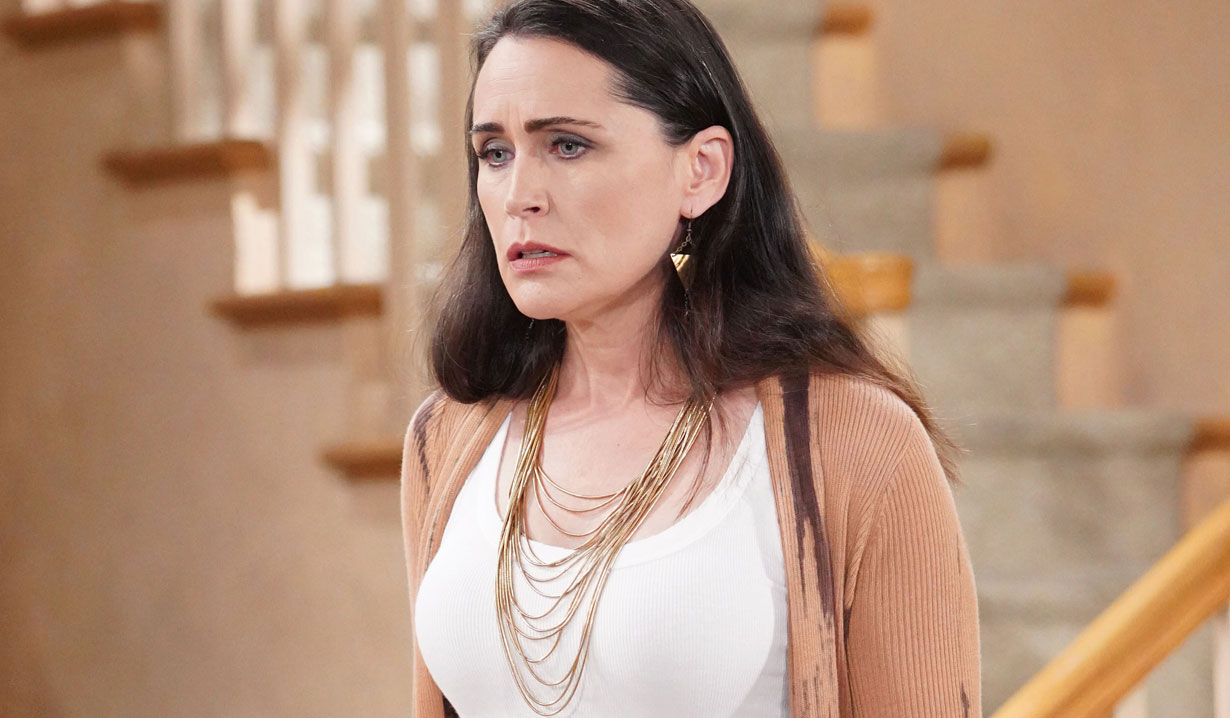 At Forrester Creations, Eric wants to make sure Donna isn’t uncomfortable about the reaction he had to her. Donna reminds him that they were married. Being with Donna reminded Eric that things can be fun. “That’s exactly what I needed,” he says. Brooke and Katie appear. Eric insists they aren’t interrupting anything but comments on what a breath of fresh air Donna is. “I should get home to my wife.” Eric leaves. 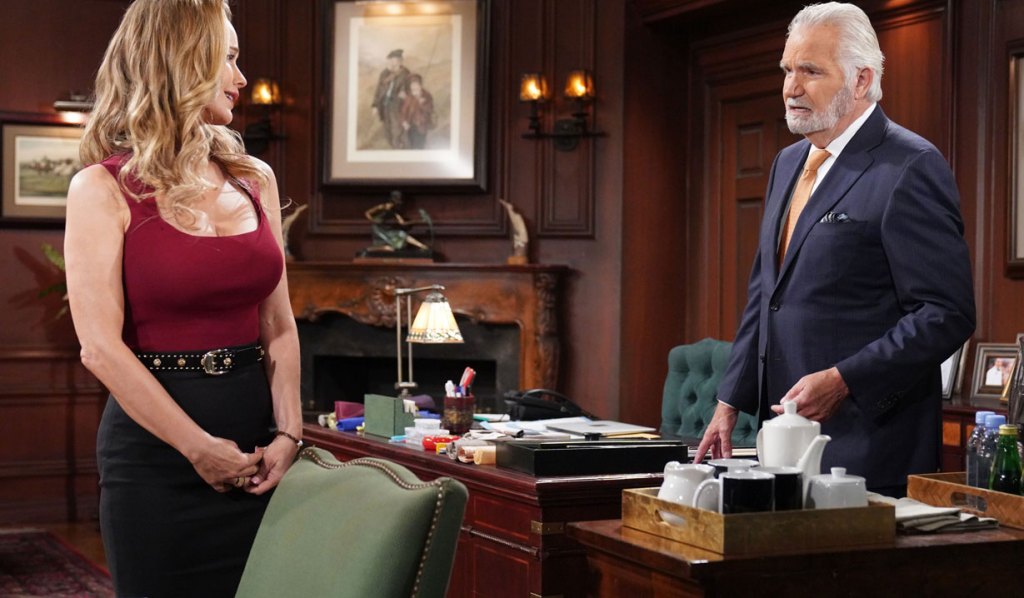 Katie and Brooke pester Donna about what was going on. Donna appears flustered and tries to fend off their questions. Anyway, she reminds, Eric went home to his wife — that’s who he wants. Katie teases that they are going to call Eric to ask him if anything happened. Donna makes them promise not to say anything then explains how she told Eric she loved him last night. He went home to be with Quinn but more happened at the office… and it happened again today. Brooke and Katie are confused. Donna clarifies that they hugged and Eric had a reaction — it aroused him. That problem he had… it kind of resolved itself. 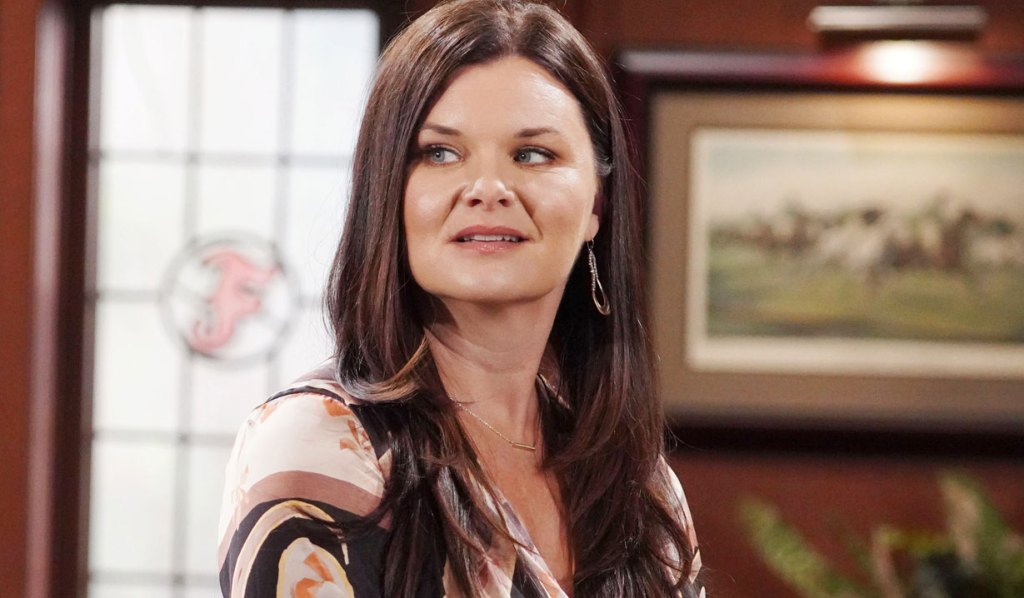 The sisters gush about the effect Donna had on Eric, as Donna recalls how it happened — it wasn’t awkward at all. She loved seeing Eric having that bit of hope. Brooke thinks she triggered the arousal, but Donna knows he plans to be with Quinn and she won’t get in the middle of that. She slips then reveals that when Eric went home to Quinn last night nothing happened – Eric couldn’t… Brooke isn’t surprised because Eric doesn’t love Quinn and says, “He loves you.” Katie tends to agree with Brooke. It happened twice. Brooke wonders if it could go anywhere. Donna is not a homewrecker. “This has gone on long enough,” Brooke says. Eric doesn’t belong with Quinn. Brooke leaves. Katie warns, “She’s on a mission.” She thinks Eric might really love Donna. 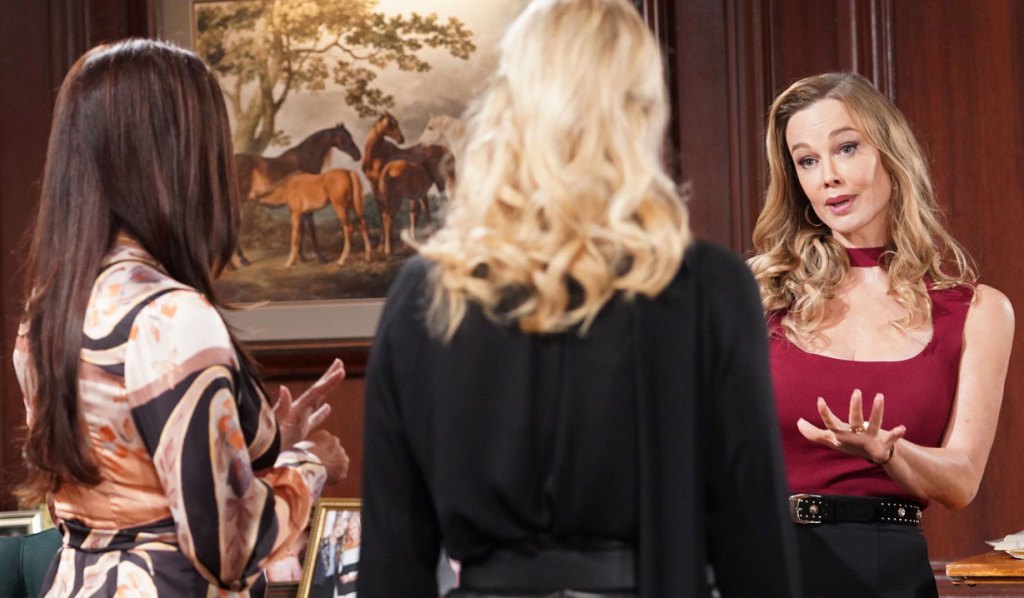 In the design office, Thomas and Zende talk about Hope For the Future. Zende’s happy they agree on something, and Thomas reminds him they both agree how great Paris is. Paris listens from the doorway then joins them. After Zende praises her, Thomas watches as they kiss. After, they talk about Thomas and Paris living together and how Thomas is hardly ever home. Zende appears happy and Thomas asks if he has an issue with them living together. Zende doesn’t and continues to talk up Paris and how she set up the scholarship fund in his name. Thomas makes a few jokes then listens to Zende tell Paris how blessed he is to have her in his life. Zende wants to have some private time with Paris tonight but assures Thomas, when he offers, that he doesn’t have to leave the apartment. 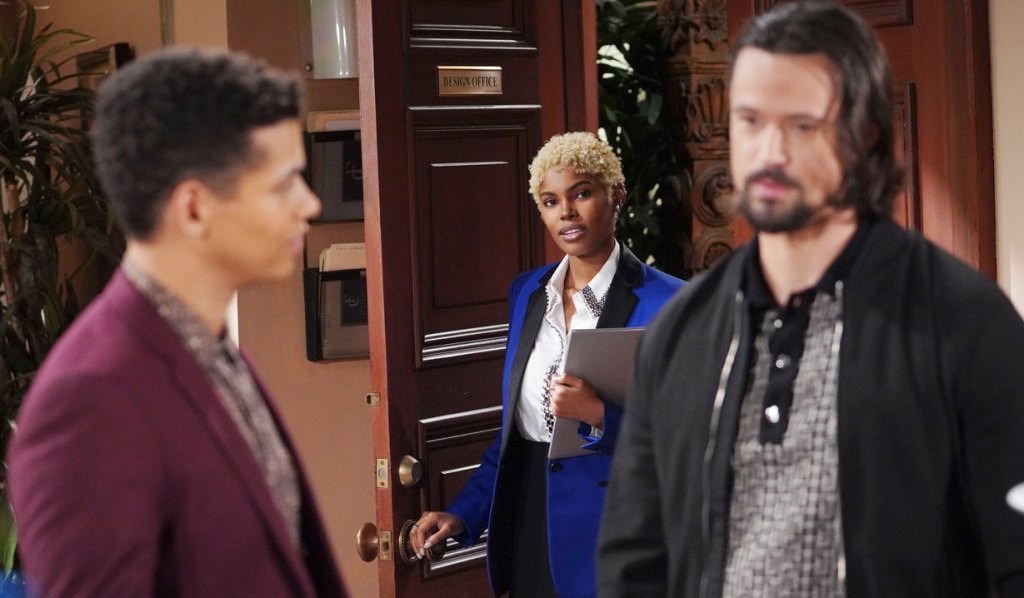 Over at the mansion, Quinn thinks back to Eric telling her how much he adores her. Eric arrives home and Quinn comments about the smile on his face and the pep in his step then asks, “Did something happen at the office?” Whatever it is, she’ll take it. Quinn doesn’t want him to feel discouraged about last night. She could feel his willingness to try — it’s going to happen, but as Quinn holds him close, Eric doesn’t appear convinced.

More: All hell’s about to break loose on B&B

Brooke arrives at the mansion and learns from Eric that Quinn isn’t home at the moment. She then reveals that she and Katie dragged it out of Donna — they know what happened, he must be so happy! Eric wishes she wouldn’t have pushed and thinks Brooke misinterpreted what she saw today. Quinn appears at the top of the stairs and listens as Brooke bashes her to Eric. She knows he doesn’t want to be alone, that’s why he’s staying with Quinn. If he loved her, he would have been able to show her last night. She begs him not to be mad at Donna for telling her and Katie. “You couldn’t with Quinn, but you could with Donna — twice,” Brooke says. “The woman that can make you truly happy. My sister, Donna.” Quinn looks as though she’s going to explode! 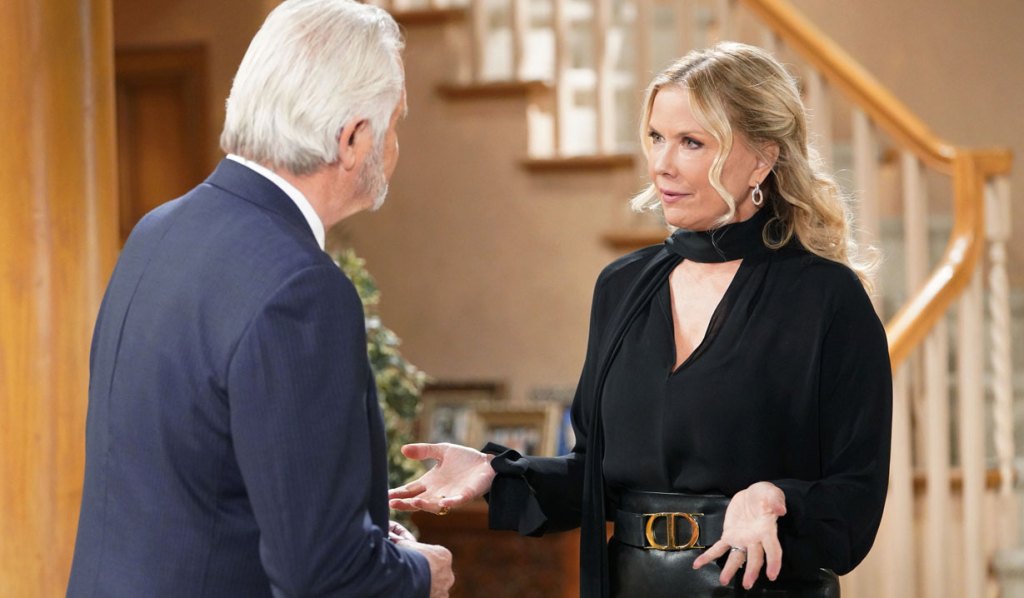 Next on The Bold and the Beautiful, Katie has a new, unexpected friendship and Quinn flips her lid!

We love that Donna has returned for a frontburner storyline. View other characters we’d like to see back in our photo gallery below.

<p>We’ve long been told that bad girls have more fun. While we’re not sure if that’s true, we know that audiences have more fun when a bad girl like Sami is around… a sentiment we’re sure ex-husbands EJ and Lucas would completely agree with, at least if you catch them on days when they didn’t want to throttle her! </p>

<p>It’s kind of insane that the occasionally-unbalanced shrink’s kids have had babies, suffered addictions and fallen in love with mannequins — we’re lookin’ at you, Thomas — and yet Taylor hasn’t put in an appearance. Does she really want to look like a worse parent than Deacon, for heaven’s sake?</p>

<p>The last time Eric came home, we were thrilled… until we realized he would only be in town long enough to discover then-wife Nicole’s infidelity before heading back to Africa. Now that she’s moved on, it’s time for Eric to realize he should have fought for his true love and recognize the truth in the words “better late than never.” </p>