Thursday, October 21, 2021: Today on The Bold and the Beautiful, Liam and Steffy want to keep the children safe, Katie confides in Carter, and Donna is caught out by Eric. 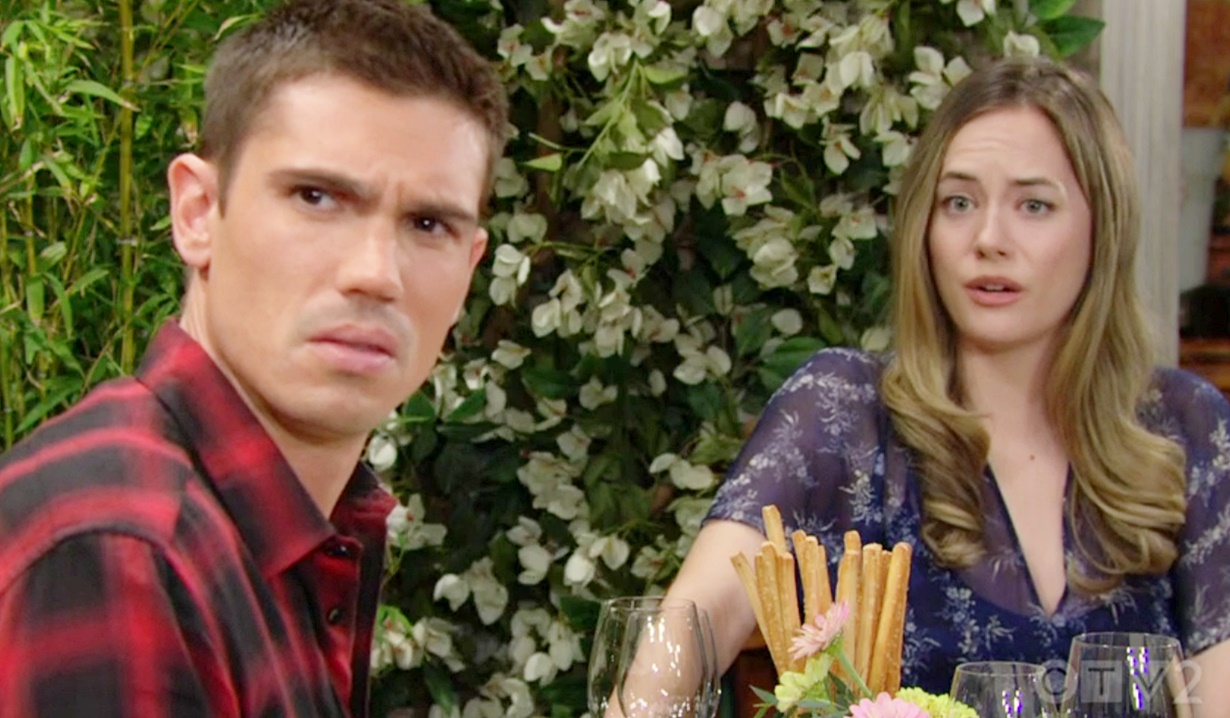 In the cliff house, Finn and Steffy canoodle and kiss while Kelly’s sleeping. Hope and Liam arrive and ask if they’re interrupting anything. Steffy and Finn grin. Steffy assures, “You came at the right time.” They all talk about how excited Kelly is to spend time with her mommy and daddy before Finn says he’s going to get going. He mentions grabbing food and Hope says she’s been craving Il Giardino. Finn asks if she wants to go together. Steffy and Liam cajole them to stay out of trouble as they exit. 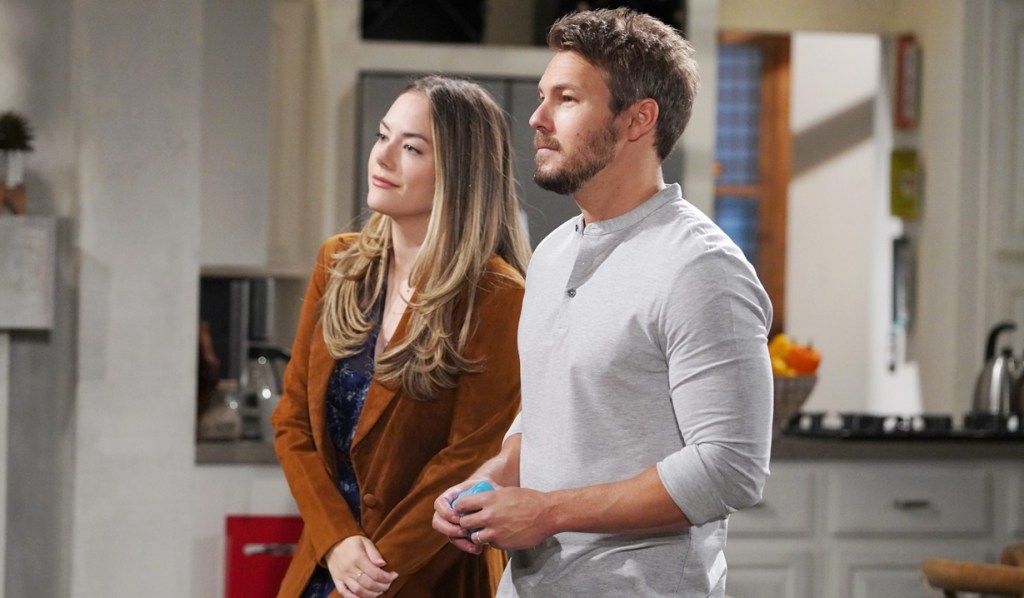 In Forrester Creations’ office, Donna tells Brooke that she wants to defend Eric as Katie did. “Eric needs our support.” Eric appears; he heard his name.

In the design office, Carter and Katie decide to eat their takeout lunch together. As they eat, Carter imagines Katie’s financial before talk turns to them jumping to conclusions about each other’s situations. Carter reiterates he cares about Eric a lot, even if his involvement with his wife makes it hard to believe. Katie believes him. She knows what it’s like to fall for the wrong person. Carter talks about his intense connection with Quinn and Katie reflects about putting faith in someone you can’t rely on. Carter hates going home to an empty house. Katie thinks he’s as lonely as she is.

More: The verdict is in on Katie and Carter

Talk turns to Bill wanting Katie back. She admits he’s pretty determined. Carter decrees if Bill can’t put her first, she deserves somebody who will. Katie confides that she’s not going back to Bill. “Our relationship is over. I’ve got to believe there’s another man out there for me. A better man.” They cringe about the idea of using dating apps and Katie moons about finding a man who wants her and only her. Carter urges her not to settle for anything less. She replies, “Okay. You too.” Katie runs down his appealing qualities and says, “Anyone would be lucky to be with a man like you.” 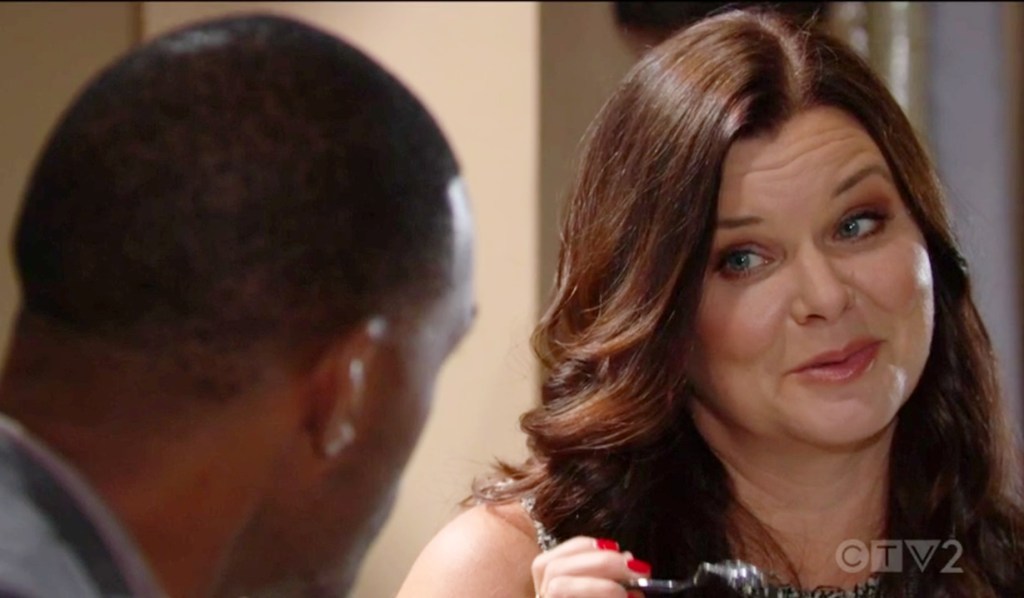 In the main office, Donna tells Eric they’re concerned about him and asks, “Are you happy?” Eric appreciates her and her sisters worrying about him. Charlie calls Eric to a meeting and he exits. Donna and Brooke exchange a look. Charlie returns looking for Quinn, who’s been hard to find lately. Brooke and Donna sniff about her and he leaves. After, Brooke and Donna worry some more about Eric and Brooke tells her sister she needs to do something about it. Donna is not going to tell Eric how she feels about him — he’s married! Brooke pushes that good things are worth fighting for. She purrs, “You and Eric were very, very good together.” Brooke thinks Donna should go find Eric in the cutting room and let him know how she feels. Donna protests and Brooke pushes her to say that she loves him. Donna explodes, “Yes! Yes, I love Eric! I will always love Eric!” Eric appears in the doorway just in time to hear her declaration. Her jaw drops when she sees him. 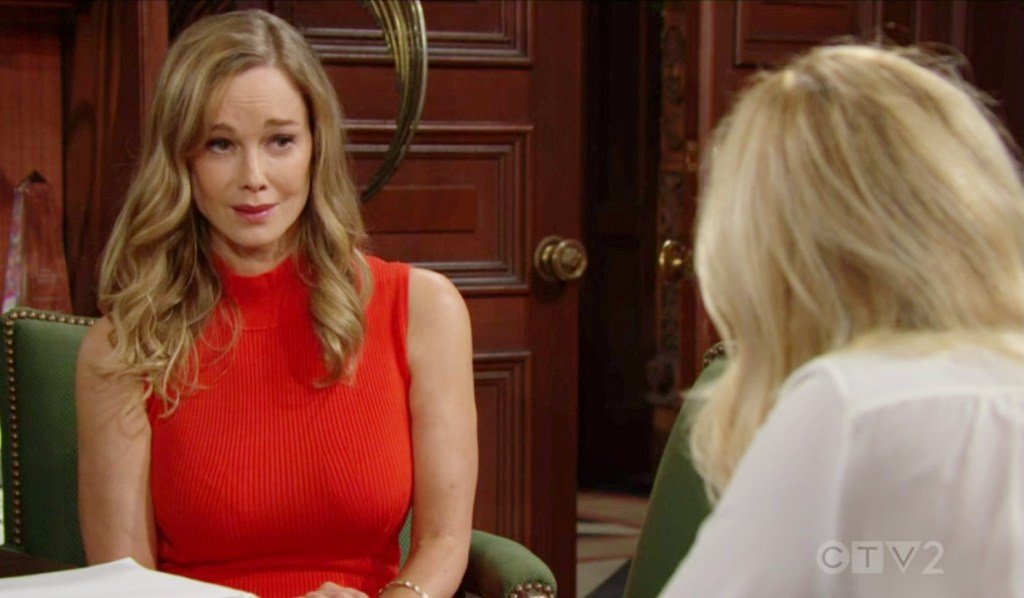 At Il Giardino, Deacon grudgingly tells Sheila he’s grateful for her generosity, but she’s done enough. He’s mulling the idea of leaving town. He’s listened to everything Sheila’s had to say, but believes Hope’s family will never let them be close. Sheila protests, and becomes intense as she informs Deacon, “No. I will not let you leave.” 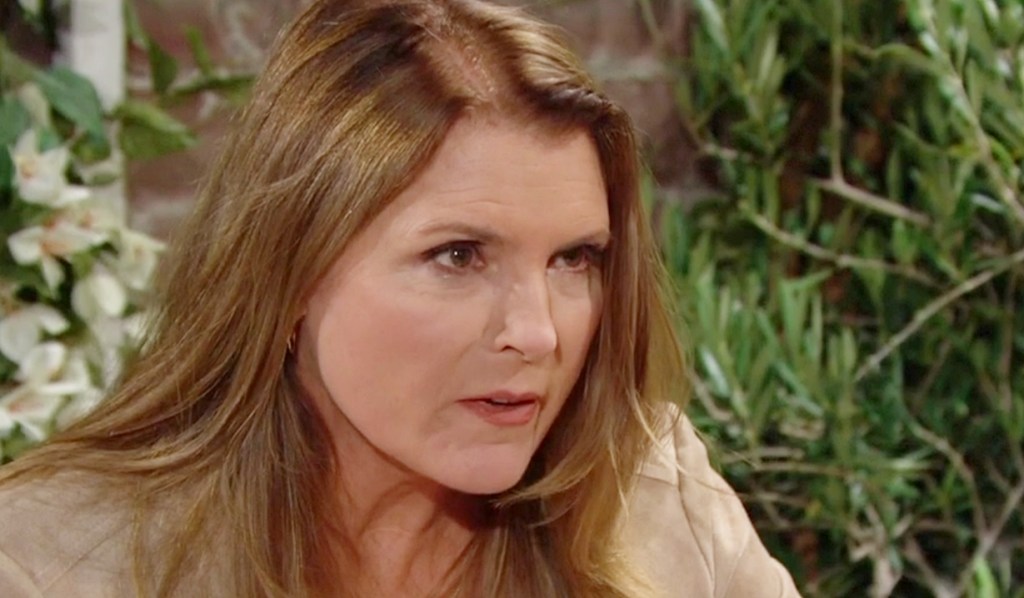 Sheila goes on about her son loving her and vow to become a part of his life. Deacon is set to leave when Sheila spots Hope and Finn arriving together. She puts her hand on Deacon’s arm and stops him. “Our children are here! Right here!” Deacon looks over and then sits back down. Sheila enthuses about the opportunity that’s right in front of them. “This could be the answer we were waiting for.” She grins from ear to ear as Deacon shoots her a wary look. 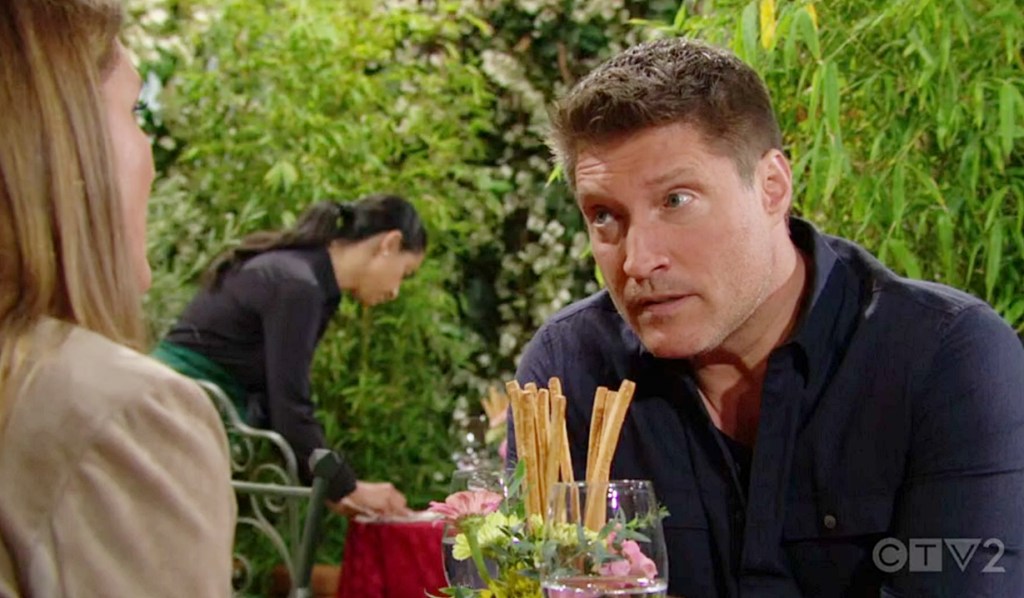 At the cliff house, Steffy and Liam play with Kelly until she goes to pick out an outfit. They laugh about her penchant for fashion and talk turns to keeping the children safe. Steffy adds, “Especially from Sheila and Deacon.” 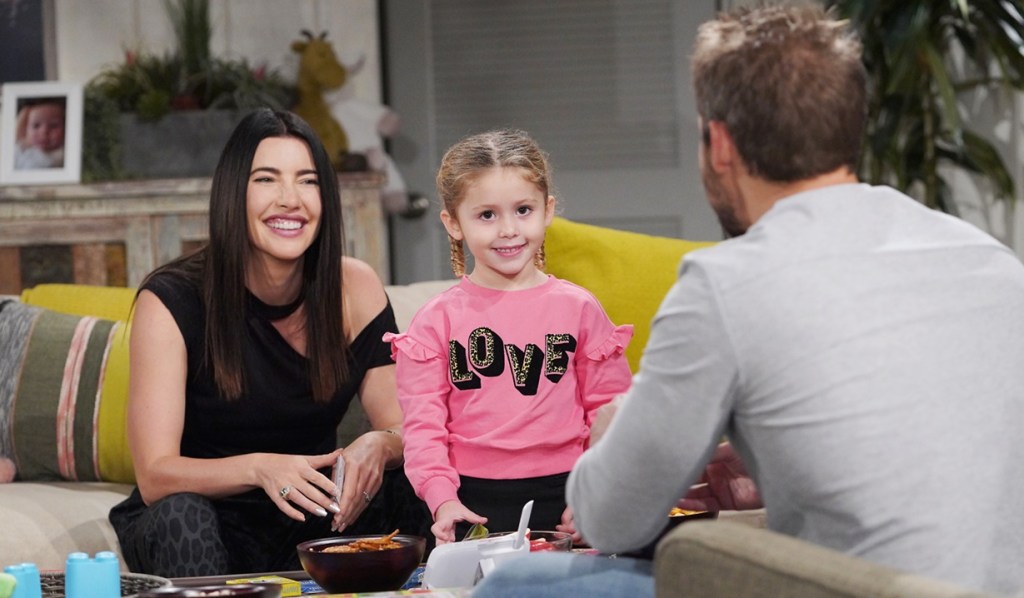 At Il Giardino, Hope and Finn are chatting at their table when Hope spots Deacon and Sheila. She whispers to Finn that her dad is there… with his mom. She’s puzzled since Deacon hardly knows Sheila. Finn wonders if they should leave.

Across the way, Deacon tells Sheila, “Well, they’ve seen us.” Sheila goes on to Deacon about this being their big chance. She urges him to go along with her and pulls him into a passionate kiss. Hope and Finn gawp from their table. Sheila hisses to Deacon, “You love me. You love me like no other!” Deacon stammers, “I love you? Okay…” Across the restaurant, Finn asks Hope, “What are they doing?” Hope doesn’t know.

Next on The Bold and the Beautiful: Eric is moved to learn of Donna’s true feelings.

Find out which Bold & Beautiful characters are featured in our fun new best soap costumes photo gallery below. 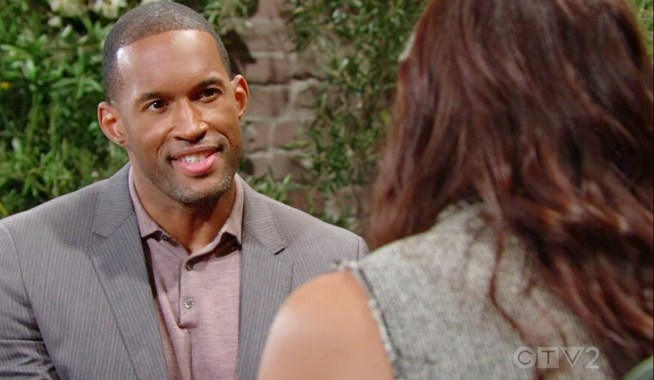 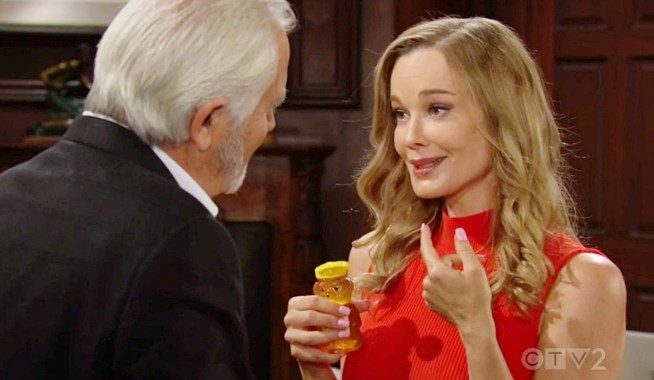