Monday, August 23, 2021: Today on The Bold and the Beautiful, amid all of their worry, Ridge and Brooke take time out for romance, as do Finn and Steffy, plus Sheila backs Jack into a corner. 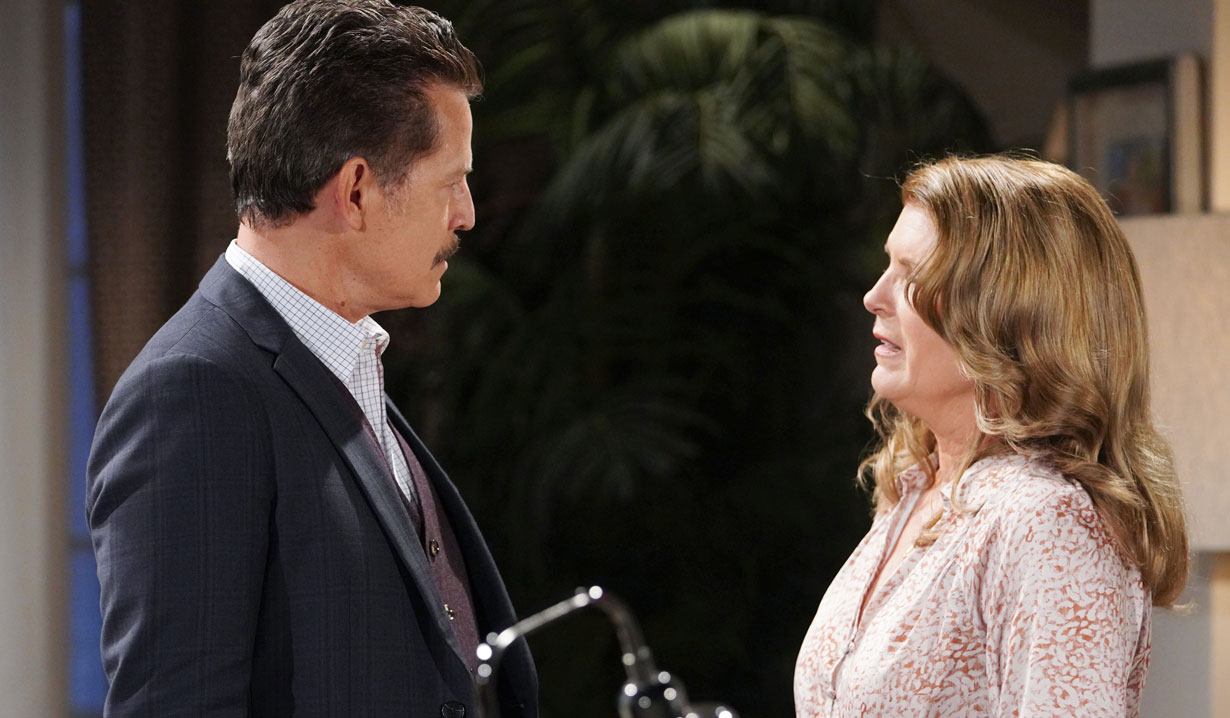 At the cliffhouse, Steffy and Finn turn the bed down and enjoy the silence from Kelly and Hayes. Finn wants to take advantage of their time together and kisses his wife. Steffy wants him too but insists on talking about Sheila again. She doesn’t blame Finn for her showing up, nothing Sheila’s done reflects on him. After she professes her love, Finn claims he wants nothing to do with Sheila, especially not tonight. They lay in bed and Finn again tries to reassure Steffy about Shelia but she warns that he doesn’t know how dangerous Sheila can be and comments that they haven’t even gone to the courthouse to file their marriage certificate. The only way to keep Hayes safe is to keep Sheila away from their son. “Tell me you understand,” Steffy says. “Promise me you’re not going to have any contact with Shelia — not now, not ever.” Finn hugs her and thinks back to sending Sheila the heart text. Steffy gets a text from Hope, reminding her of their meeting in San Francisco. She doesn’t want to leave them. He gets Steffy to repeat after him, that he and the kids will be fine while she’s away tomorrow. They make love. After, Finn vows that no one will ever interfere in their family or their happiness. Steffy still appears worried. 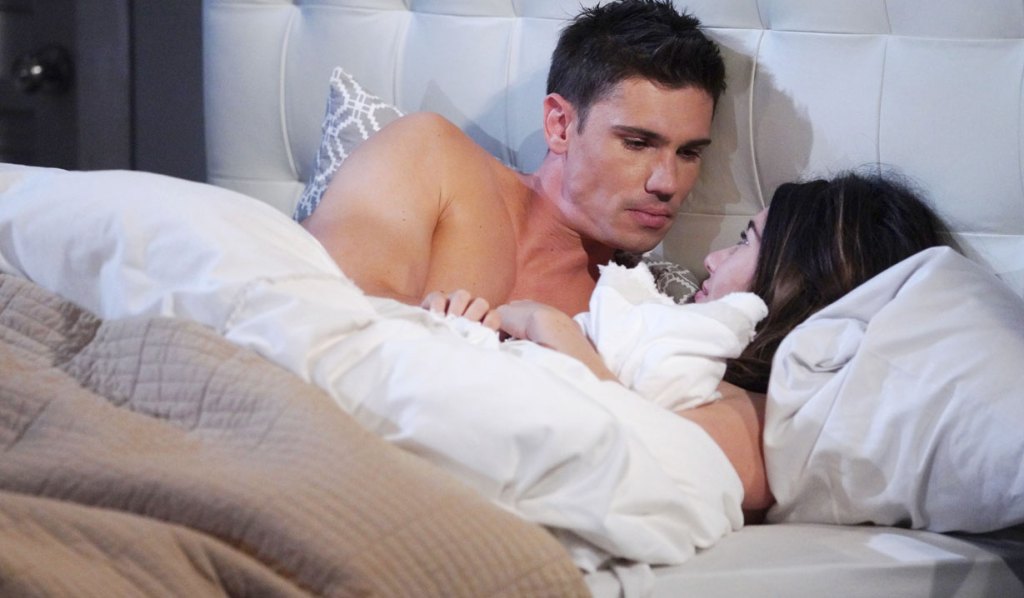 More: The B&B plot twist we all see coming

In Sheila’s room, she warns that Jack doesn’t want to mess with her when it comes to Finn. He’s had him all these years, now it’s her turn. She wants to spend more time with her son. Jack snaps, “He’s my son and Li’s!” Sheila reminds Jack that Li has no idea that her husband cheated on her — Finn is her son! And how would Finn feel if he knew Jack had been lying to him all these years about being his adopted son? She recalls their affair and how Jack convinced her to give him their child. “What do you want?” Jack asks and warns she’s not going to have a relationship with Finn. Sheila accuses him of exploiting her when she was vulnerable — and thinks back to how he had to make sure everything was perfect. He adopted his own child! Jack demands to know why Sheila came to Los Angeles and again asks, “What do you want?” Jack realizes he should have told everyone the truth sooner and plans to do so. Sheila reminds him that it’ll destroy his marriage. There’s only one thing she wants in return for her silence. She’s sure Steffy ordered Finn not to see her again but she wants to hold Hayes just once — and see Finn one more time. She begs Jack to make it happen. If he arranges it, she’ll keep their secret and leave. Jack doesn’t think he can believe her but Sheila promises to keep her end of the bargain. Is it too much to ask for everything he’s going to get in return? Jack agrees to speak with Finn then leaves. Sheila grabs her cell and looks at Finn’s heart message then anticipates seeing Hayes. 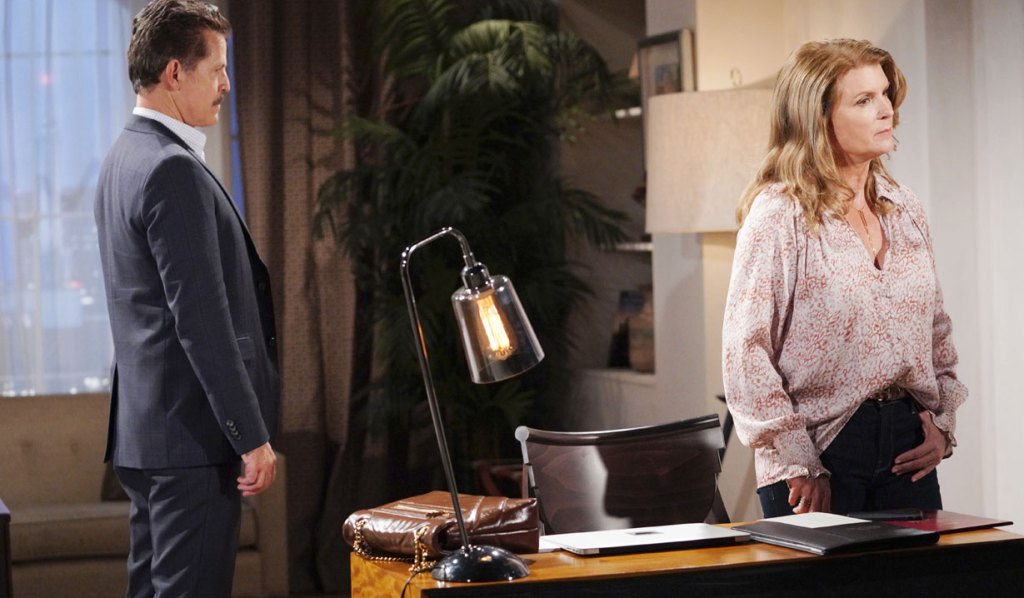 In their bedroom, Brooke appears in Ridge’s shirt and seductively orders him to brush her hair. They take a seat by the bed and Ridge does as he’s asked, all the while worrying about Sheila — and the fact that her DNA is running through his grandson. To help Ridge relax, Brooke gives him a massage and assures him he’s done everything to protect Steffy and Hayes. Ridge worries that it’ll all be for nothing if Finn decides he wants a relationship with his mother. Brooke doesn’t think that will happen and distracts Ridge by taking off his shirt. After sex, Brooke’s happy her distraction strategy worked. Ridge agrees it did, but Sheila is still here. Brooke insists no one, not even Sheila, could tear Steffy’s family apart.

More: Watch B&B from the beginning for free

Next on The Bold and the Beautiful, Eric reveals the truth to Quinn.

Look through our gallery below filled with photos of the CBS soap stars and their real-life partners then get your free daily soap-opera fix for The Bold and the Beautiful — and all of the other daytime dramas — delivered straight to your email inbox by signing up for Soaps.com’s newsletter. 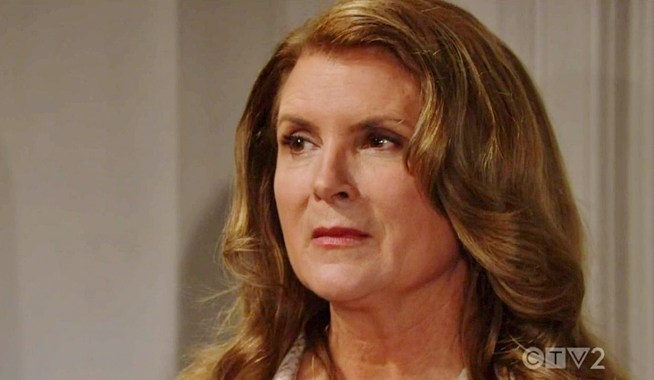 Eric Makes a Stunning Confession to Quinn: ‘I Can’t Make Love to You' 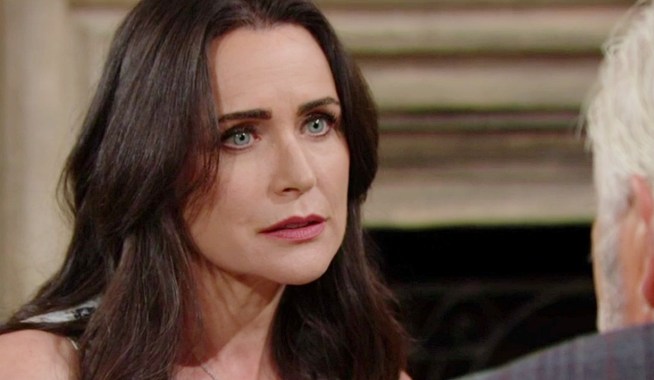