Friday, August 20, 2021: Today on The Bold and the Beautiful, Finn reassures Steffy, Carter is devastated, and Eric senses something is amiss. 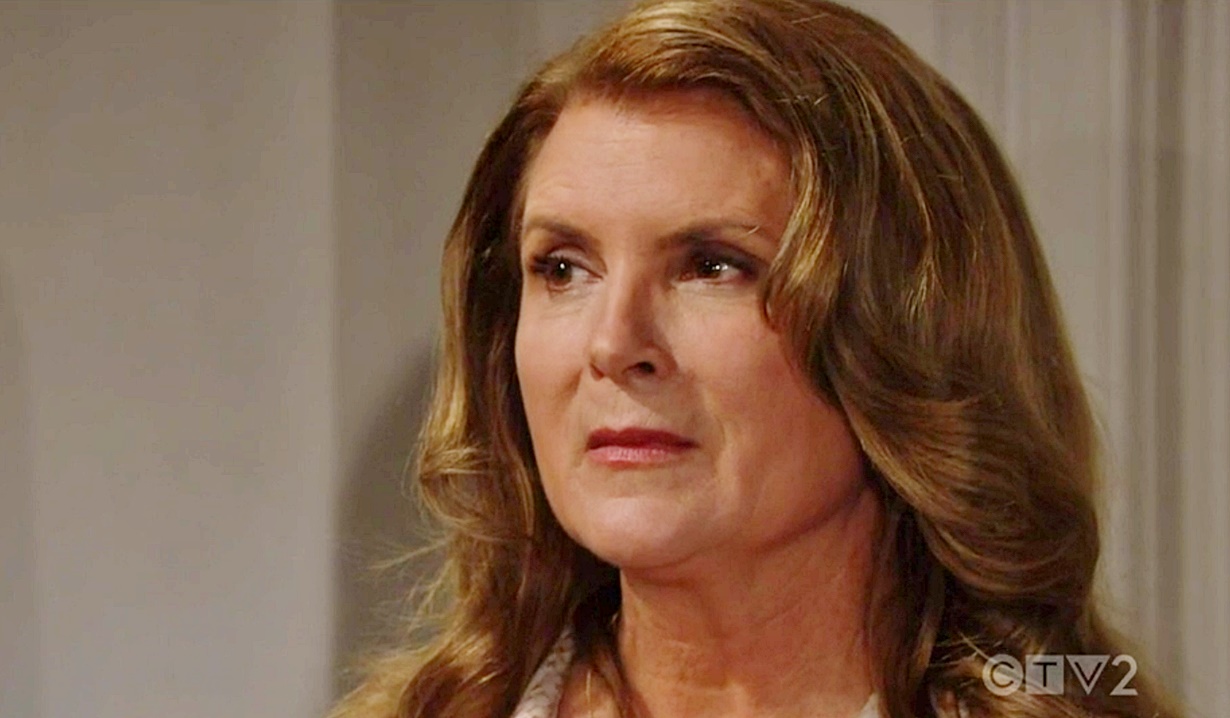 At the cliff house, Steffy pours wine as Finn emerges from the bedroom after getting Kelly to sleep. They talk about the kids before sharing a toast and a kiss. Finn asks, “Happy?” Steffy is… she just wishes… Finn muses, “Someone else — anyone else — was my birth mother.” Steffy apologizes if it seems like she’s obsessing. Finn understands — the woman who terrorized her family and took so much from her, turned out to be her mother-in-law. Steffy groans. 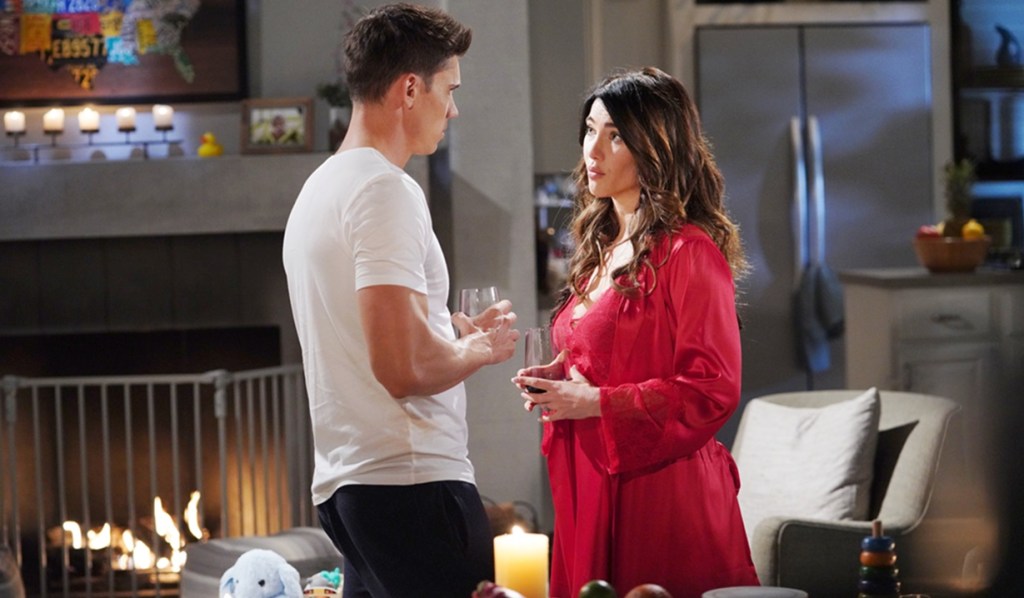 Jack shows up at Sheila’s room and she asks how he found her. He tells her it doesn’t matter and informs her she needs to leave town… tonight. “There’s no place for you in my son’s life, Sheila. None.” Sheila argues that Finn can make his own decisions. Jack counters that she should do them all a favor and leave. Sheila says, “So much has changed…” Jack barks, “Not this! You’re not interfering in my son’s life. I won’t have it!” 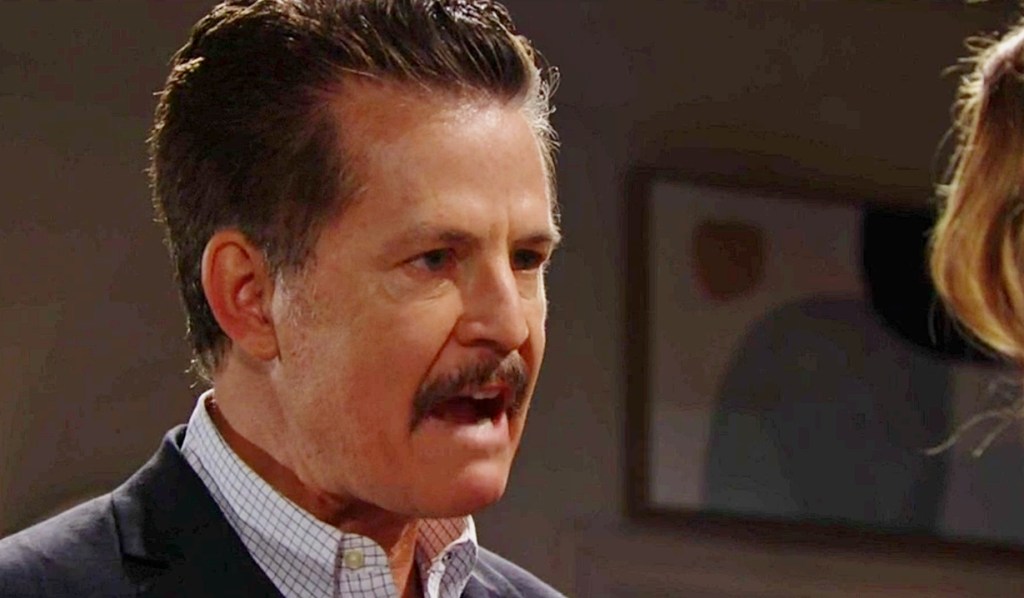 At the loft, Carter wanders his apartment and flashes to Quinn telling him that Eric wants her back. He grimaces, and then recalls urging her to go back to her husband. 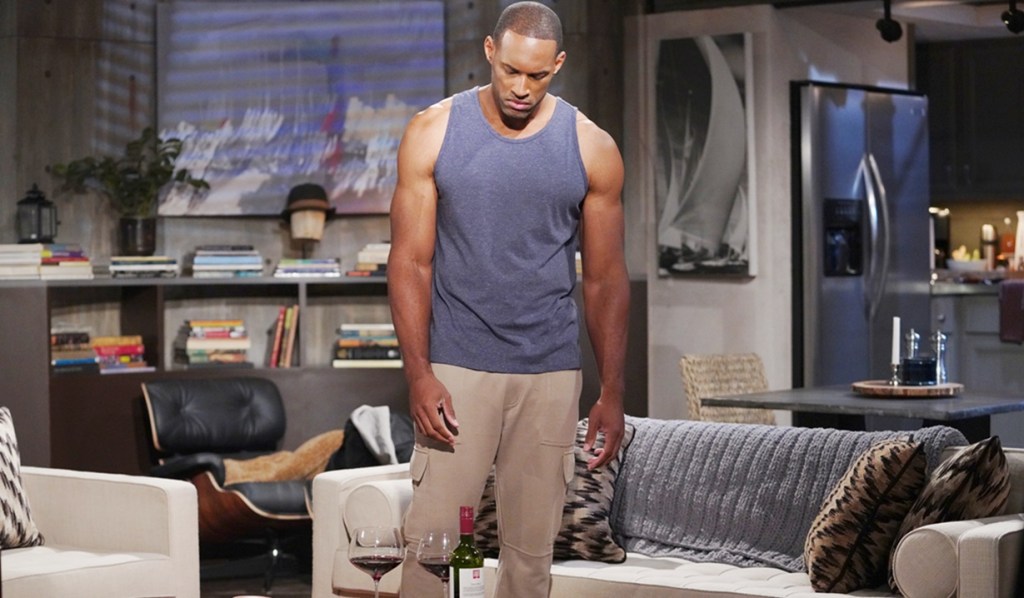 At the Forrester mansion, Quinn looks up at her portrait. Eric embraces her from behind and observes, “It’s back where it belongs. More importantly, so are you.” Quinn turns to hug him. Over martinis, Eric admits he was worried that Quinn might turn him down and tell him she’d moved on. They toast, “To us.” Eric decides he’s going to play some songs for them and takes up a seat at the piano. He croons, “I’ll be loving you, always. With a love that’s true, always…” Quinn stands by the mantle smiling as she listens, and eventually joins him at the piano and rests her head on his shoulder. “That was beautiful,” she sighs afterward. Eric lets her know he can see everything she’s thinking in her eyes. Quinn hopes he sees her commitment and devotion. “It won’t waiver. Never again.” They kiss. 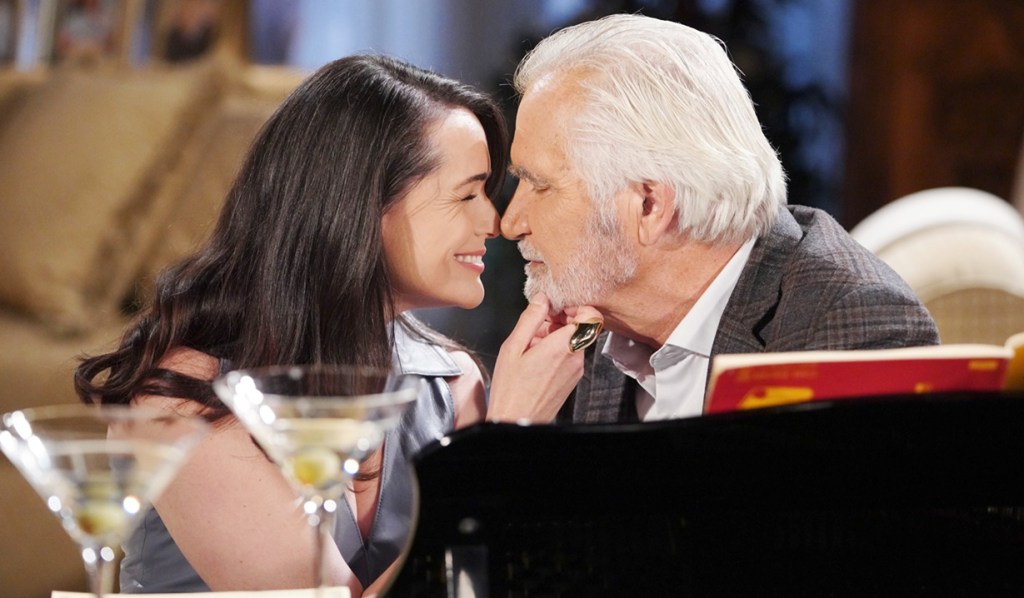 At Steffy’s place, Finn tells his wife that he thought they would all be thrilled he’d found his birth mother… he didn’t realize. Steffy says he has to understand the heartache Sheila has caused her family and asks him to promise to stay away from her. She doesn’t throw the world ‘evil’ around easily but… Steffy sighs and apologizes — she knows he had high hopes. Finn wants to focus on their future together. Steffy recaps, “A future without Sheila. There’s no room for her here.” Finn promises he won’t let anyone or anything hurt their family. They kiss. 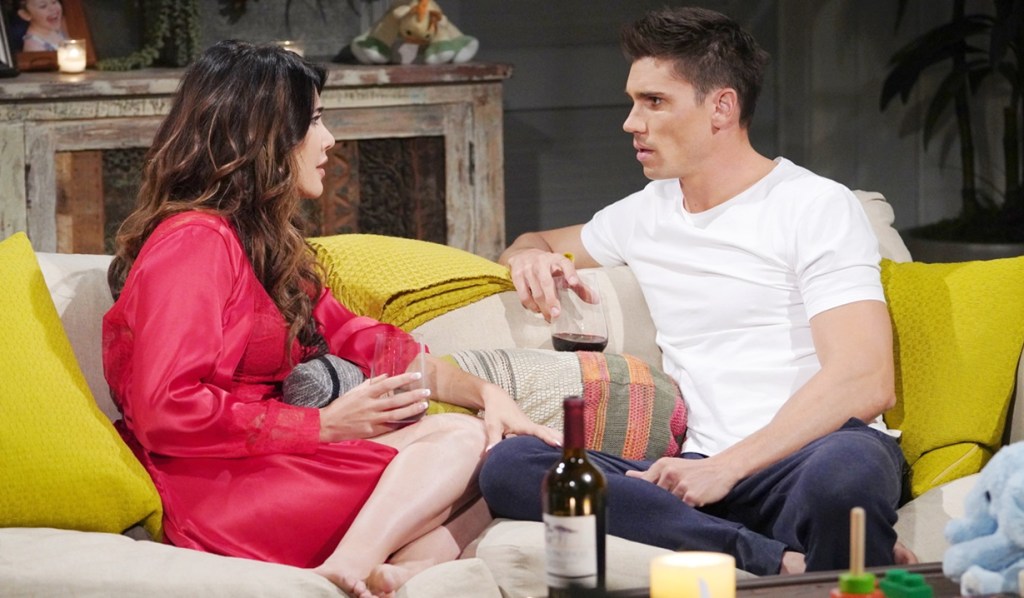 At the Forrester mansion, Eric yawns and admits it’s been a long day. Quinn will head upstairs and get ready for bed and asks, “Care to join me?” Eric will be along shortly. He’s so glad they didn’t give up on us. Quinn was preparing for a very different life, but reflects, “A life without you? No. This is where I’m supposed to be.”

Later, Quinn comes downstairs in a silky robe only to find Eric asleep on the sofa. She covers him up, kisses him, and then looks up at her portrait. Her expression changes as she thinks about Carter. 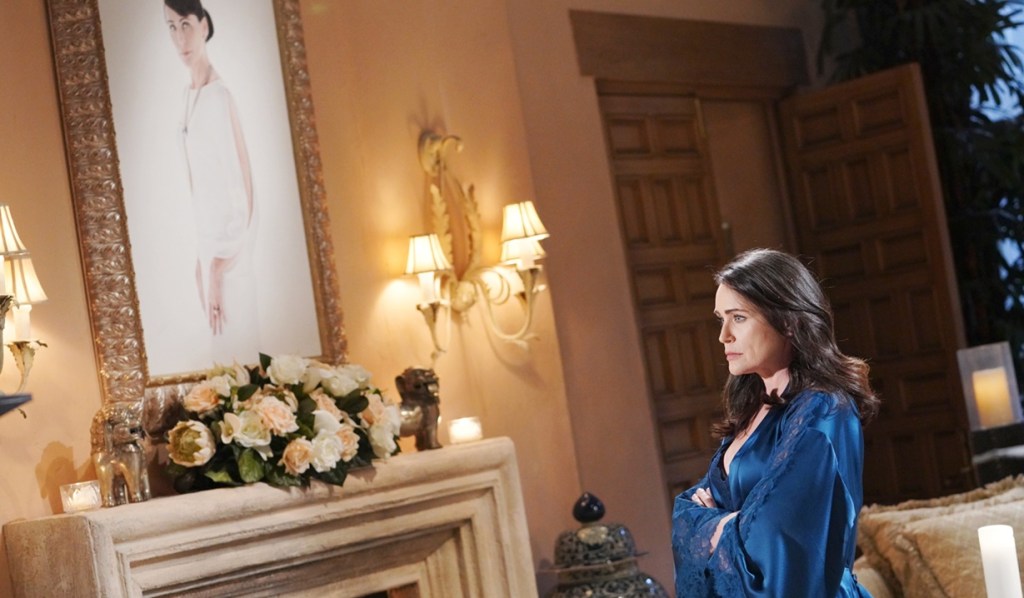 At the loft, Carter agonizes as he flashes to telling Quinn he loves her and her saying it back.

When Quinn goes back upstairs at the Forrester house, Eric opens his eyes and looks dismayed.

In Sheila’s room, she warns Jack it’s not a good idea to tell her what to do. Jack volleys that it wouldn’t be a good idea to interfere in Finn’s life either. Sheila wonders why he’s really panicked and alludes to a cover up. Sheila calls him out for not having the guts to admit why he really kept quiet about her. She points out that his wife was upset he hadn’t mentioned her, imagine how she’d feel if she knew there was so much more. Jack tells Sheila to disappear and never contact Finn, and he’ll send her a thank you card, maybe some flowers. Sheila describes how he used to pull her into the supply closet at the hospital when Li was working double shifts. She wonders how she’d feel if she found out he convinced her to adopt his bastard son. Jack narrows his eyes as Sheila informs him that now that Finn’s back in her life she’s not going anywhere. She seethes, “Don’t you dare try to come between me and my son. If you do, you’re going to regret it!”

Next on The Bold and the Beautiful: Sheila blackmails Jack.

Don’t miss our gallery of Bold & Beautiful stars and their partners below. Get your free daily soap-opera fix for The Bold and the Beautiful — and all of the other daytime dramas — delivered straight to your email inbox by signing up for Soaps.com’s newsletter. 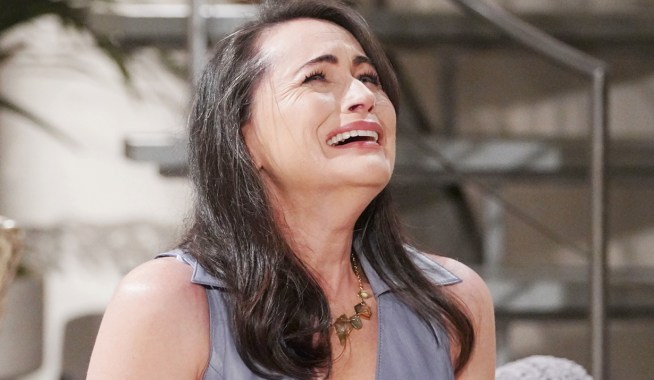 Quinn and Carter Make a Heart-Wrenching Decision — And Sheila Vows Not to Be Cut Out! 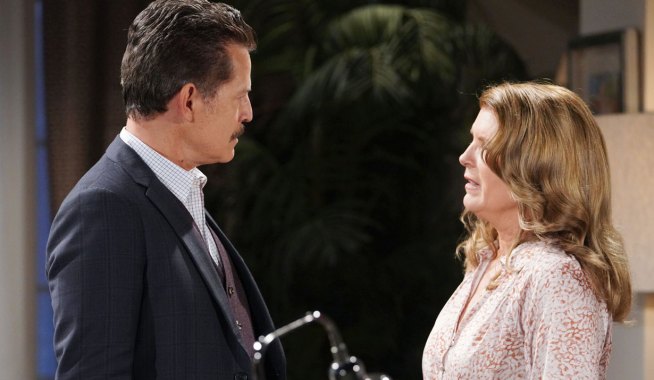