Monday, July 26, 2021: Today on The Bold and the Beautiful, Ridge and Steffy discuss Eric, Zende's surprised by Paris' news, and Carter and Quinn can't fight that loving feeling.

At Forrester Creations, Ridge marvels at the news that Paris has moved in with Steffy, who explains that the young woman and Hayes have become besties. He muses that Paris wouldn’t be looking for a place if Quinn and Carter hadn’t done what they did.

At Carter’s place, he tells Quinn he can’t say goodbye. She breathes, “I can’t either.” He can’t imagine not holding her again or looking into her eyes. Quinn sighs that it’s complicated. Carter pulls her into a kiss. They embrace and Quinn gushes that their hearts are beating in unison — she’s never felt this before. “I never want this to end.” They kiss again. Carter agrees, “Never.” Quinn and Carter begin undressing and move to the sofa where things turn more passionate. 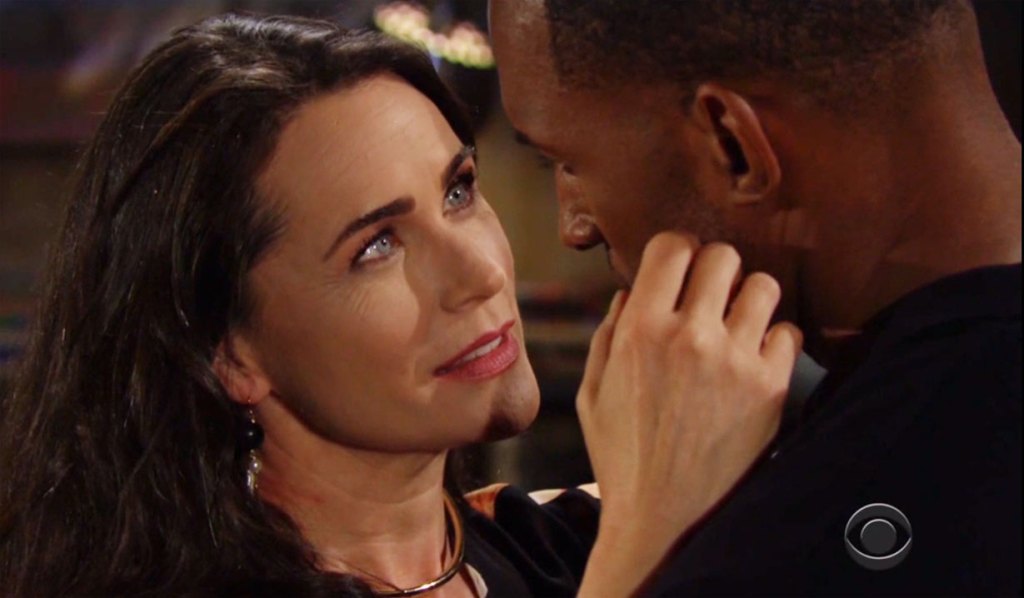 Paris finds Zende changing in the design office and updates him that she moved into Steffy’s cliff house. He makes a face and warns she won’t have a lot of privacy. Paris is tired of being alone and likes activity. Zende wonders if it might be awkward living with the boss. Paris relays that Steffy and Finn both seem pretty laidback — she’s looking forward to getting to know Finn better. Paris marvels at everything Steffy juggles and gushes about Finn. She thinks they seem like terrific people. Zende believes they must feel the same way about her or they wouldn’t have asked her to move in. He reflects that Steffy was in a dark place when she met Finn. Paris thinks he was a real catch. 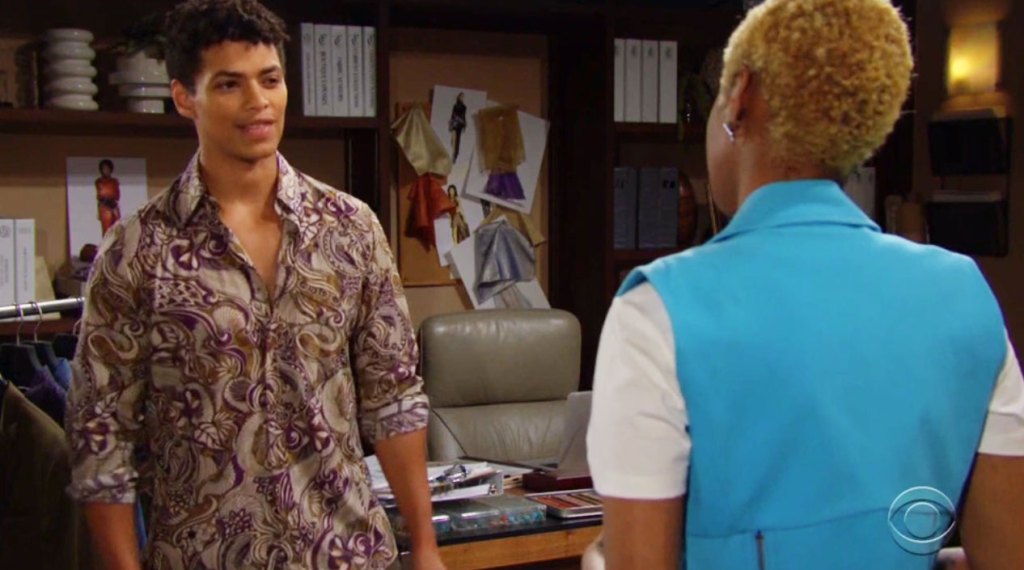 More: B&B’s Finn has a secret

In the main office, Ridge thinks it’s nice that Steffy gave Paris a place to stay. She muses about Zoe’s situation and says she doesn’t know what she’d do if she found out the man she loved was having an affair with the boss’ wife. Talk turns to Carter and Quinn. Steffy can’t stand what she did. Ridge thinks she’s finally out of their lives for good. Flo enters with legal papers, looking for Carter. Ridge notes he was there earlier, but he doesn’t know where he is now. After Flo’s gone, Ridge decides he won’t look at Eric’s divorce papers, but tells Steffy he wants to be sure Carter stays on top of it. He’s sour that the lawyer’s not there to handle it so Steffy suggests calling him. 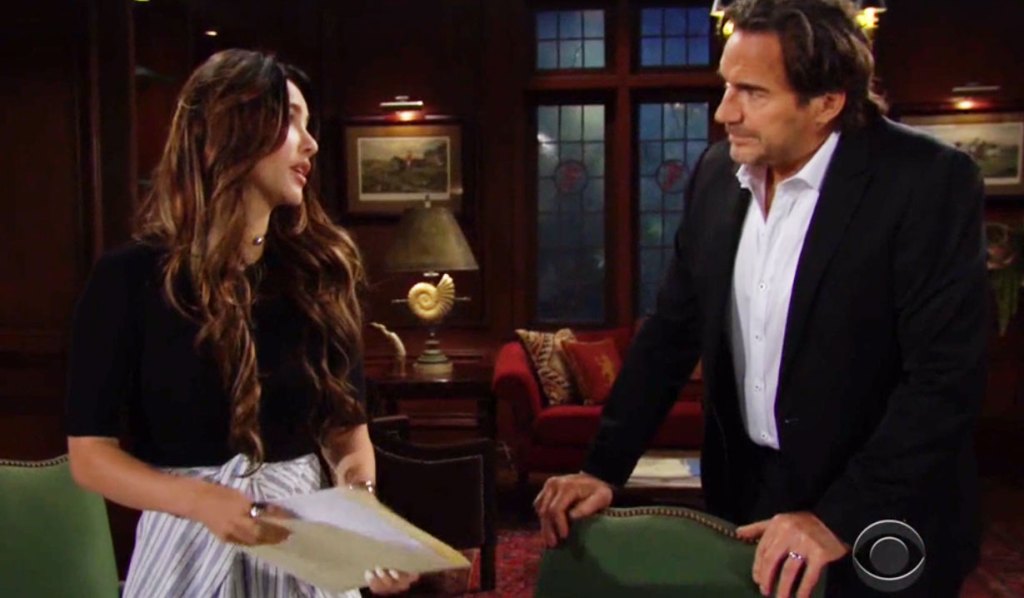 More: Is B&B setting up a Brooke/Steffy rivalry?

At the loft, after sex, Quinn reminds Carter if anyone found out he was with her, he could lose everything — there’s a million reasons why this is a terrible idea, but she can’t stay away from him. Carter responds with an urgent kiss. His phone begins ringing — it’s Ridge. Carter makes eyes at Quinn as Ridge tells him the divorce papers came in and need to be dealt with. Quinn grimaces as Ridge complains to Carter that Quinn broke his father’s heart. Carter relays he won’t be back in today.

In the office, Steffy questions Eric’s divorce being handled by the man who broke up his marriage. Ridge doesn’t believe Carter will screw up again.

At Carter’s place, Quinn laments hurting Eric. Carter reminds her how he turned away from her. Quinn knows she messed up and wonders if he’s found another woman — if so, it would break her heart. She knows the marriage is over and they need to move on. Quinn wishes she could plan her life with Carter. He argues that she could; he can get a job somewhere else. Quinn couldn’t live with herself, but for now she wants to stay wrapped up in his arms. 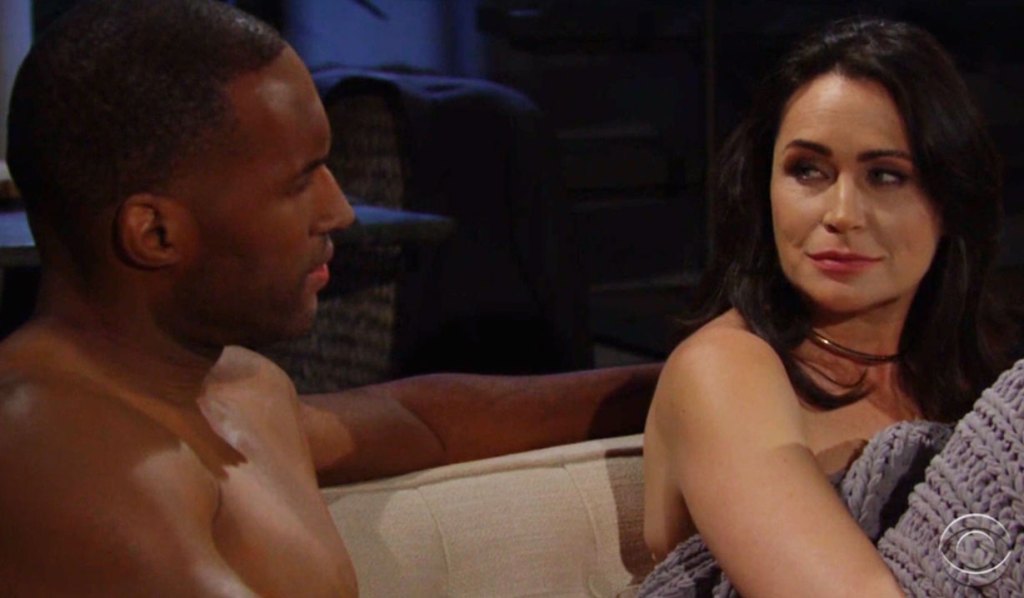 Next on The Bold and the Beautiful: Zende and Paris decide the status of their relationship.

Look back on Bold & Beautiful’s most unhinged characters in the photo gallery below! Get your free daily soap-opera fix for The Bold and the Beautiful — and all of the other daytime dramas — delivered straight to your email inbox by signing up for Soaps.com’s newsletter.

After Quinn Learns That Carter Saved...

Steffy Makes a Decision About...