Tuesday, July 13, 2021: Today on The Bold and the Beautiful, Liam and Bill are set free, Brooke blasts Quinn, and Eric strikes a deal with Carter. 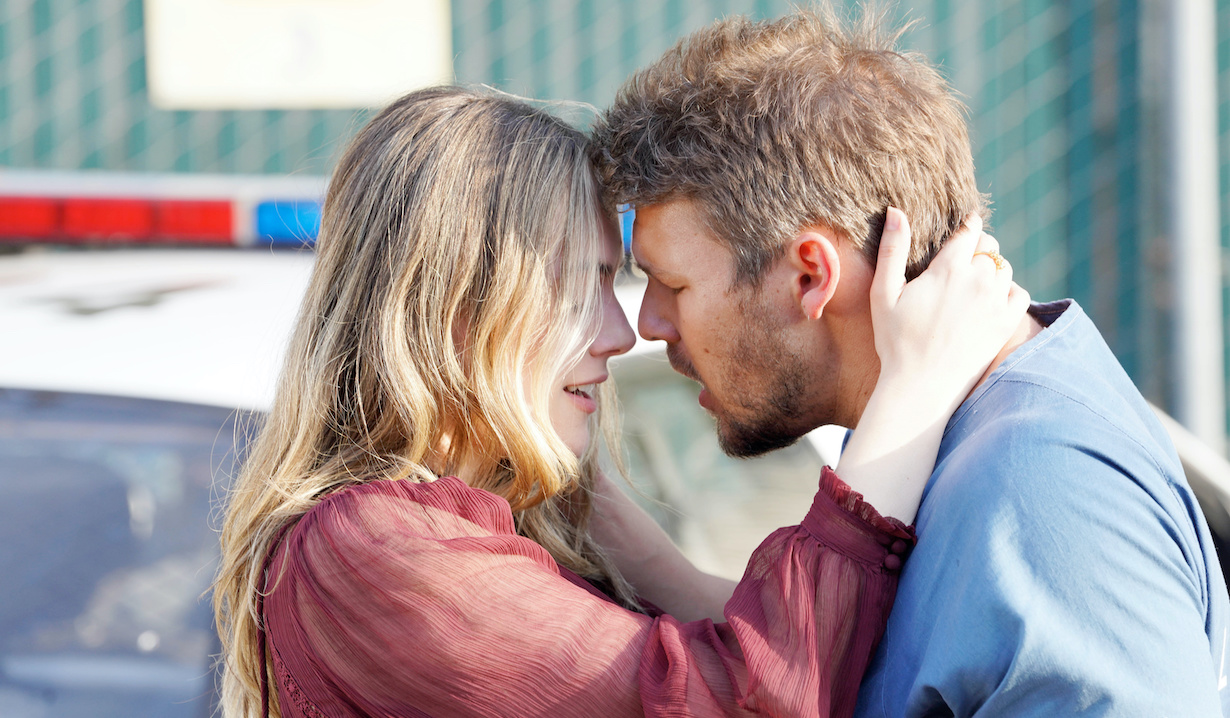 In the jail parking lot, Liam is completely baffled by the turn of events. “I don’t understand what’s happening right now,” he tells Hope. “I’m free?” And yes, apparently, just like that, Liam’s off not only the struggle bus but also the one that was supposed to take him to a maximum security facility. “The truth,” says Hope, “it finally came out!” Inside the jailhouse, Bill is brought from his cell so that Thomas and Hope can, at Baker’s behest, fill them in on what’s going on.

With his audience gathered, Thomas plays the video from Vinny, shocking Bill and Liam as they listen to Poor, Dead Vinny’s rambling about how Hope and Thomas will finally be together. “What is he saying?” asks Liam. “He stepped out in front of the car on purpose?” Baker says that they now know conclusively that Liam didn’t murder Vinny and, to their credit, nobody in the room says “Duh.” As Liam reels, Bill seems vindicated… apparently forgetting that he still left Vinny — whom you’ll recall wasn’t yet Poor Dead Vinny, as he tried to speak — to die. 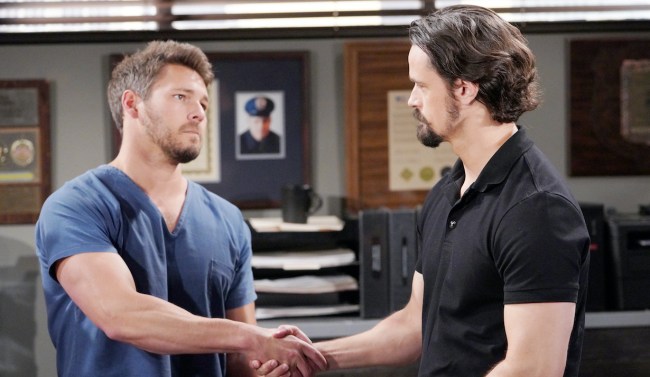 Thomas insists he did nothing to inspire Vinny’s actions, and Liam says that they’re good. Bill even thanks Thomas for turning in the phone with the evidence clearing their names. Baker says that because Bill and Liam left the scene of the crime, they’ll have to pay a “substantial” fine and hand over their driver’s licenses, but as for jail, their time served will suffice. And just like that, the men are free. Shaking Thomas’ hand, Liam says, “You saved my life today, and I won’t forget that.” He then pulls Hope into his arms, almost unable to process that he is, in fact, free. As for what’s next for Bill — in particular, where his future with Katie is concerned — Don Diamont weighs in on that very topic here.

At the Forrester mansion, Carter admits he doesn’t quite understand why he behaved the way he did. “I hurt the man who has always treated me with the utmost respect.” Carter admits he considered confessing, but didn’t. “I’ve never been as disappointed in anyone as I am with you right now,” declares Eric. Carter says he’ll resign pronto, but Eric prevents him from leaving, saying they’re not done. 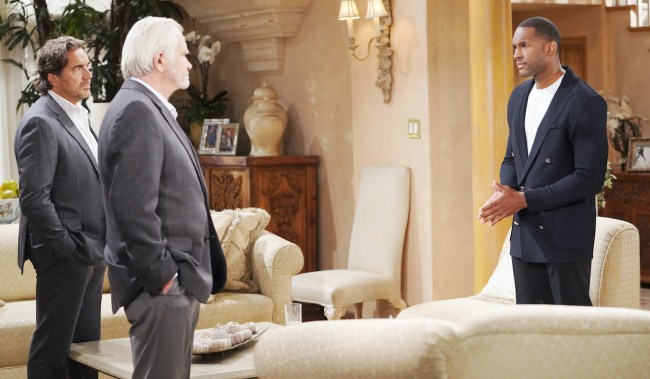 “My marriage is over,” says Eric, prompting Carter to say he regrets his actions and so does Quinn. “You don’t defend that woman,” interjects Ridge. “Not here!” At his son’s advice, Eric tries to compartmentalize his feelings. In one box is the man he loved and trusted, in another is Eric’s feelings of anger and betrayal toward a man he can barely stand to look at. “I don’t know what to do with that,” the older man admits. “I can’t have it here in the house. Take it outside and bury it… because it reeks. It reeks of betrayal!”

Ridge points out that Carter saved the family heartache by exposing the truth about Quinn. “This family is finally done with Quinn Fuller,” declares Ridge, adding, while looking at Carter, “I’m not sure we’re done with you.” Eric says his marriage was practically over and she was never going to change. As for Carter, “I’m going to give you another chance. But it’s conditional on one thing: You stay the hell away from Quinn!” Driving home the point, Eric says there can be “no relationship of any kind between you and Quinn.” Carter accepts, saying he won’t disappoint Ridge or Eric again. Eric then tells Carter to take down Quinn’s portrait. “Take it down, take it with you. I don’t want to see it. I don’t want to know what you do with it. Trash it if you like.”

Brooke generously (sarcasm intended) offers to help Quinn pack up her office, but the jewelry designer says she’d rather do it herself. “Just be sure not to take anything that doesn’t belong to you,” says Brooke. “Oh, wait, you already did that! You took Carter away from Zoe!” With a sigh, Quinn reminds Brooke that Carter and Zoe were on a break. When Brooke continues needling Quinn about her actions, Quinn points out that the blonde never once tried to get to know her. Brooke admits she’d be delighted by Quinn’s downfall if it hadn’t hurt Eric so much.” 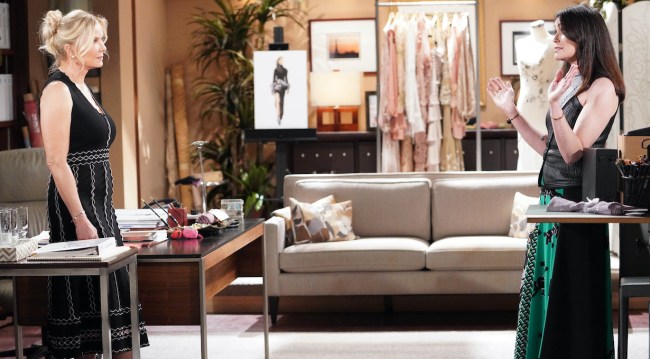 When Brooke dubs Quinn “an untrustworthy guilty pleasure,” the brunette tries explaining that there was a reason she cheated, but to no avail. “The thing that really upsets me is that a decent man like Carter got pulled into your poison,” says Brooke. The two women continue butting heads, with Quinn asking if exposing the truth about her fling with Carter was just Brooke’s way of paying her back for having interfered in her marriage. Quinn says she could tell this to Eric, but he’d take Brooke’s side. For her part, Brooke says that’s because she’s “warm and kind and loving. I’m not cruel and calculating and cold like you are, Quinn.”

More: All the news you may have missed

Quinn doesn’t quite say “Hey, I didn’t sleep with Eric’s son and have his baby,” but she does say, “Despite all my mistakes, I was a better wife than you ever were.” But Brooke insists that she cares about what’s best for Eric and always has, adding the family will now be done with her forever. “You’d rather see Eric be alone for the rest of his life than be happy with me,” says an astonished Quinn, but Brooke says no matter what happens next, Eric — like the rest of the family — will be better off without her.

As Hope and Liam walk away from the jail, he asks her if there’s more to the story that he doesn’t yet know, and she promises to tell him everything later. Instead, they revel in their happiness. “Have I told you how much I love you?” he asks. She tells him he’s going home, and they prepare to rejoin their lives, already in progress…

Next on The Bold and the Beautiful: Justin has to face the music! .

Now that Liam’s a free man, he’s probably anxious to get out of those prison blues… which gives us an opportunity to talk about some of the eye-popping fashions featured on Bold & Beautiful of late, which we do in the gallery below! 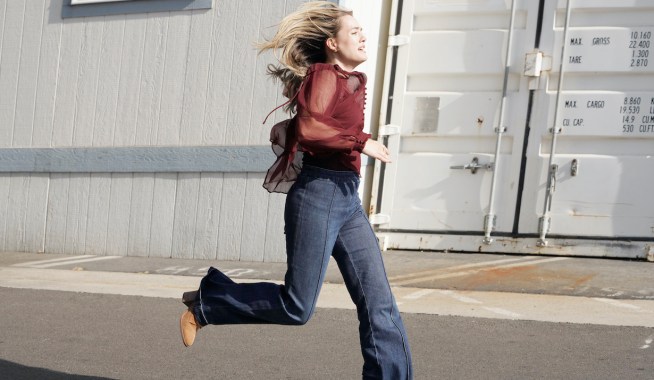 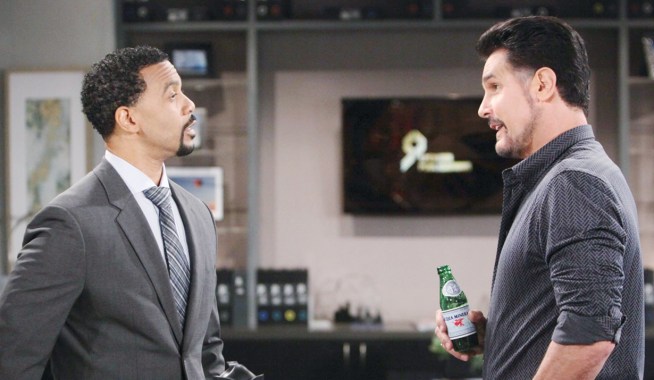