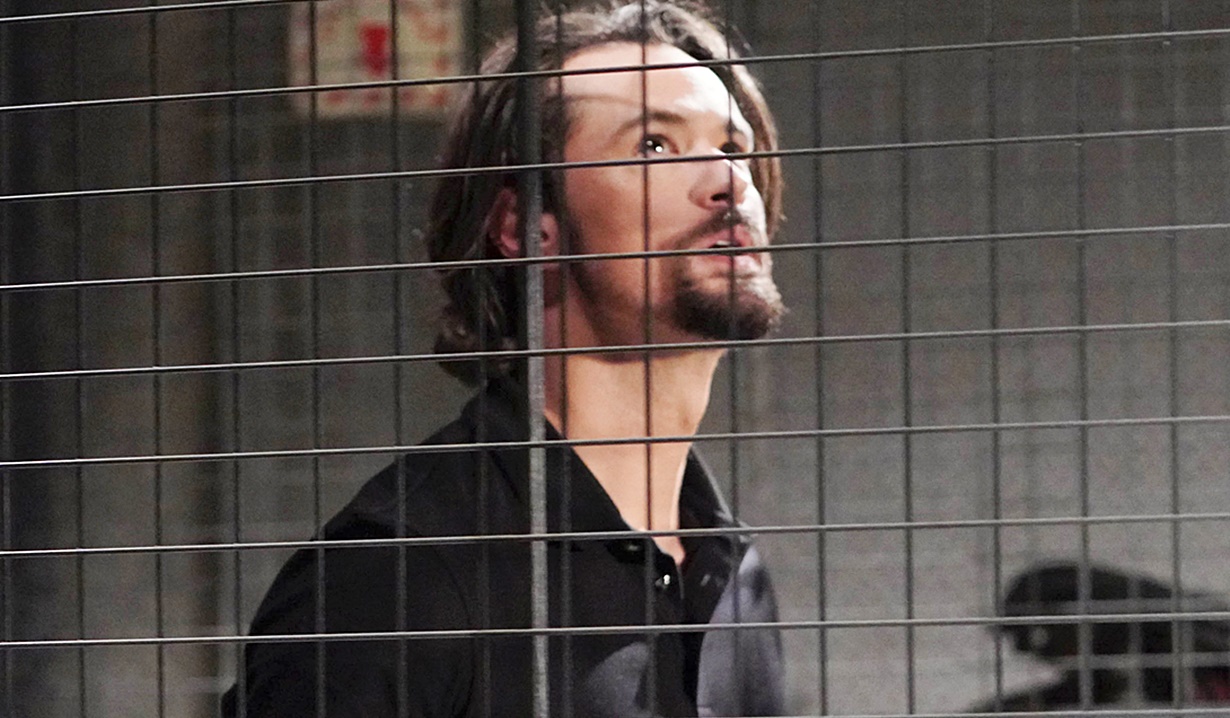 In the cabin, Steffy wishes she could do something to help Hope, who knows this has been difficult for her too. Hope opens up about being reluctant to tell the kids until she knows what the future holds. Steffy wishes there were a way to prove Liam’s innocence. Hope complains that none of this should be happening… and it’s all because of Bill. They worry about the kids’ reactions and Steffy fumes that they shouldn’t even be in this position. “It was Bill who made this into a crime!” They go over how their daughters could be facing a future without their father because of Bill’s idiotic decision. Hope supposes he was trying to protect the family. He always does what he wants and no one holds him accountable. Steffy interjects, “Until now.” 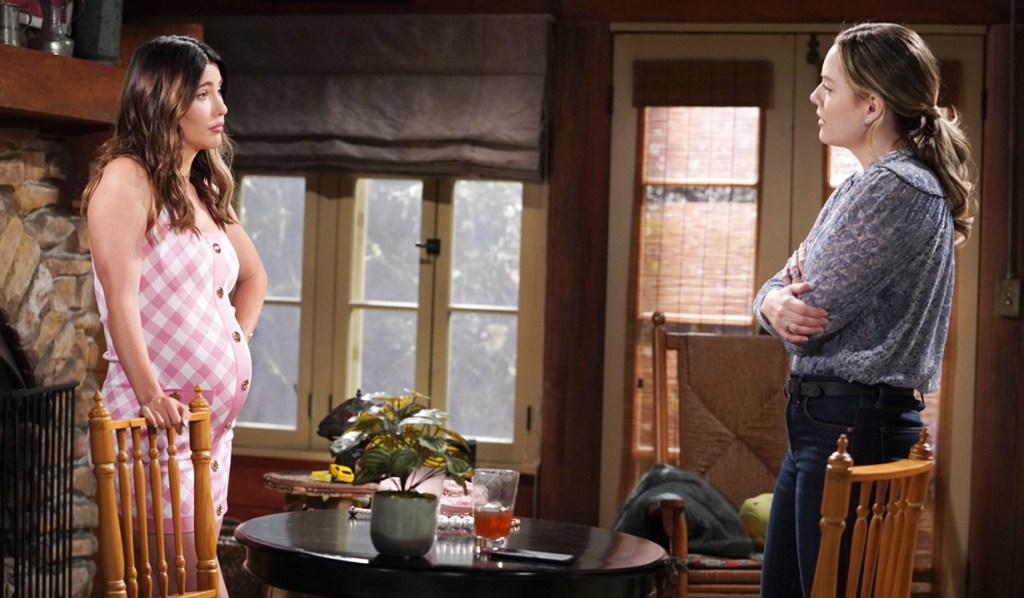 Hope and Steffy lament Liam being an innocent man caught up in a web of unfortunate circumstances. Talk turns to Bill’s unswerving loyalty to Justin. Hope’s worried Liam will get lost in the shuffle. Steffy concedes that the D.A. could make an example of both of them. Hope relays that Justin didn’t seem hopeful at their last meeting. Liam could be charged with manslaughter or even murder. Steffy’s stunned. Hope recaps that it was a tragic twist of fate — but how do they make anyone believe that? They puzzle over Vinny being in that neighborhood and his and Liam’s fates being intertwined forever. Hope stresses that they have to fight for Liam and somehow prove that him hitting Vinny was accidental.

At the jail, Bill’s pumped to hear news about Will winning a game. He then turns serious to remind Katie that he’s a survivor and that Justin will get him and Liam out of there. Katie panics that his son needs him at home. Bill assures her he told Justin he would pay any amount of money to get out and ordered him to do his damn job and get them home to their kids. Katie loves him and is worried about him. She wants to make sure everything is being done to get them out. Bill reminds her they confessed to everything. He rants about that loser Vinny being out on the street in the middle of the night and reiterates he told Justin to do whatever it takes to get them out of there. 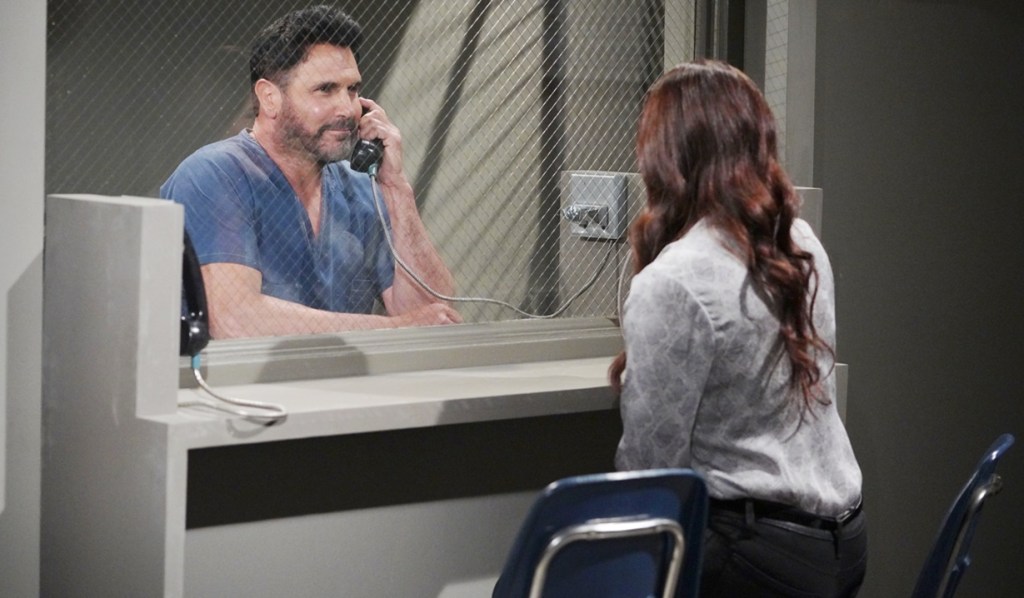 Katie admits she’s scared — is he really convinced Justin will be able to get him out on bail? Bill notes people have gotten out for a lot worse. He asks her to tell Will he’ll be home soon and that Spencer men never give up. Katie warns that the other kids are talking; it’s taking a toll on their son. Neither of them are sleeping. Bill promises he’ll be around for them both if they just hang on until he walks out of that rat hole a free man. Katie feels they have to be realistic. Bill repeats that he’ll be there for her and their family. The guard says time is up, so Bill reassures Katie one last time that Justin will get him off.

At Spencer Publications, sinister music plays as Justin surveys Bill’s office while seated in his CEO chair. He picks up a cellphone, watches the video playback of Vinny being hit by the car, and then deletes it. Justin hears Wyatt’s voice and he soon enters the office. He demands to know if Justin has a plan to get his father and brother out of prison. “You do have a plan, don’t you, Justin?” Justin senses he’s becoming impatient. Wyatt warns his father is too. Justin assures him he was just putting together a strategy. Wyatt reflects that Justin is a good lawyer, but he’s a corporate guy. Justin repeats that there’s a plan. Wyatt’s relieved that his dad and his brother have someone so loyal in their corner. Justin excuses himself to attend a meeting. Wyatt stops him to say that Bill and Liam need him. Justin cryptically replies that he’ll make things right. 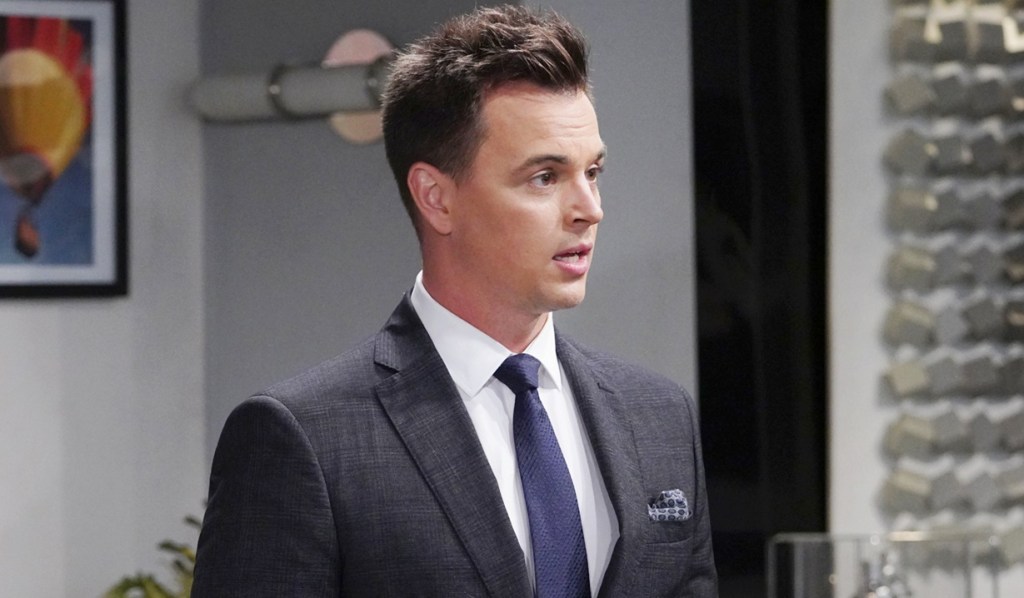 In a cage in a basement storage area, Thomas hollers for help. Justin appears looking smug. Thomas asks why he’s in there. “Why am I in a cage?!” He flashes to showing Justin the video of Vinny and Justin punching him. Thomas fumes, “You. You did this.” He rants about needing to take the video and go to the police to get Bill and Liam out of jail. They have to tell Steffy and Hope. Justin just stares as Thomas goes on and on about needing to free his clients. Finally, Justin says it’s not going to happen. Thomas argues that Liam could be back with his family tonight, and Bill can go back to running his company. “Isn’t that what you want?” Suddenly, Thomas realizes that Justin doesn’t want them out of jail — he wants to take over the company. He slams the cage in anger and demands, “That’s what you want, isn’t it Justin? Answer me!” 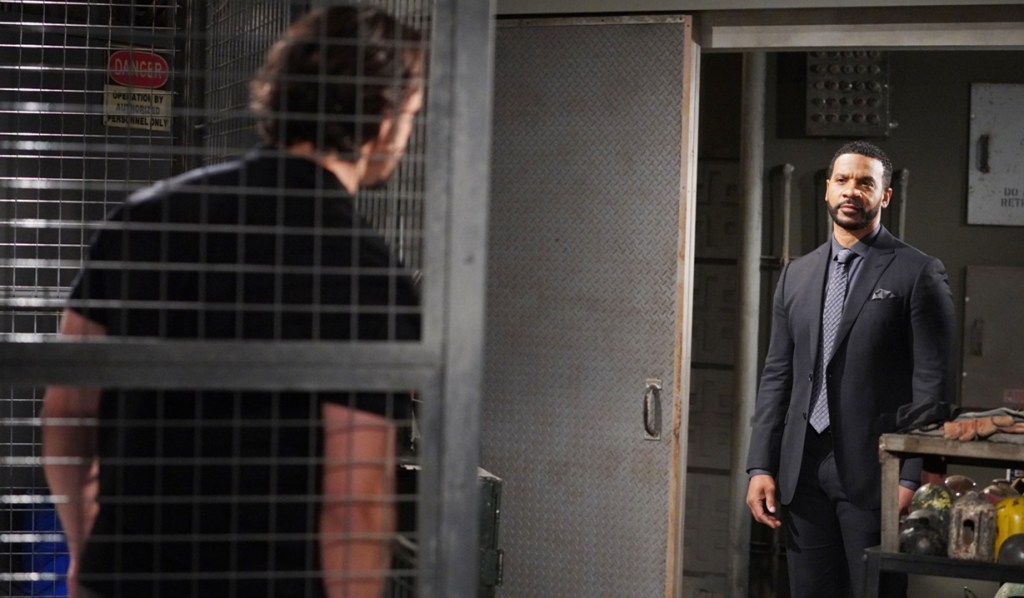 Next on The Bold and the Beautiful: Justin comes into his own at Spencer Publications.

Is Justin about to join the ranks of Bold & Beautiful’s most unhinged characters as seen in the photo gallery below? Get your free daily soap-opera fix for The Bold and the Beautiful — and all of the other daytime dramas — delivered straight to your email inbox by signing up for Soaps.com’s newsletter.

Justin Knocks Thomas Out Cold After...