Monday, January 18, 2021: Today on The Bold and the Beautiful, Wyatt introduces Bill to Summer Newman, Flo overhears a conversation, and Liam pleads for forgiveness. 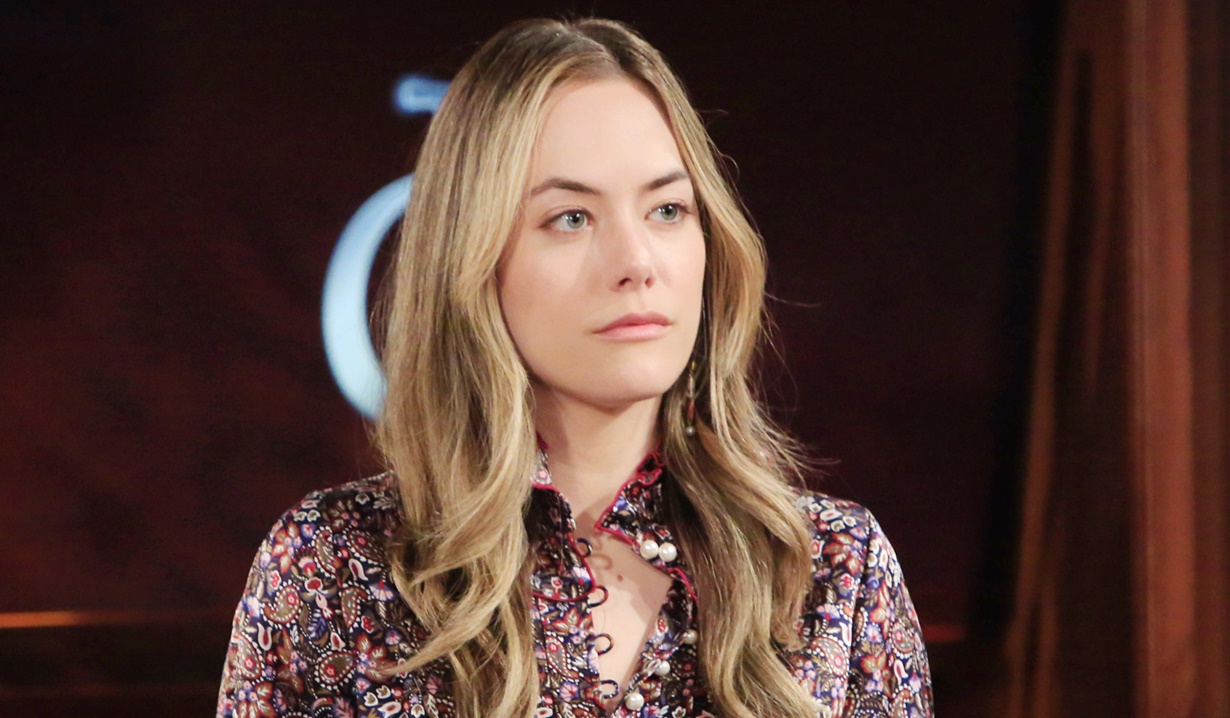 At Forrester Creations, Hope wants to know if Steffy’s intuition is telling her the father of the baby is Finn… or Liam? Steffy won’t know until she has a paternity test, but she’s hoping it’s Finn’s baby. Hope doesn’t believe it for a second. She points out she has invested years in Liam while Finn’s relatively new. Hope prompts her to just admit she wants the child to be Liam’s. Steffy insists she doesn’t want to ruin Hope’s family or lose her future with Finn. Hope walks out.

In the cliff house, Finn warns Liam he’s had free rein around there but things will be very different if Steffy’s carrying his child. He won’t allow him to hurt her ever again. Liam counters he doesn’t have to build a moat around Steffy — his intentions are still good. Finn questions where all his love for Hope was when he was cheating with Steffy. Liam regrets deeply what happened but there’s no changing it. “Make no mistake. I love my wife more than anything. What I did to Hope is something I will regret forever.”

Wyatt brings Summer Newman into Bill’s office at Spencer Publications. Bill, shirtless while changing after a workout, bellows at the interruption. As his father dons a shirt, Wyatt awkwardly makes introductions. Bill’s passed through Genoa City on business a few times and knows her parents. When Wyatt suggests a partnership between JCV and Eye on Fashion, Bill’s onboard and adds he respects Summer’s grandfather, Victor Newman. 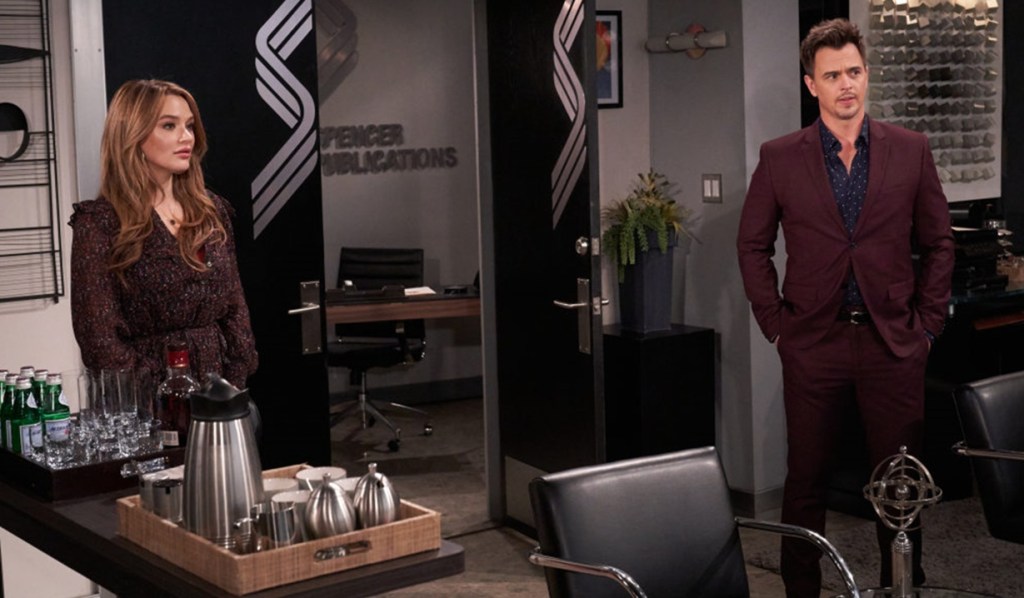 After settling the business transaction, Summer teases that Bill isn’t scary. He asks her to keep that under her hat. Once Bill exits, Summer brings up Sally, who she characterizes as very interesting. Wyatt tells her they were almost married. Summer wants to know what she’s really like. Wyatt muses, “Sally is complicated.” Summer can’t figure out what caused her to leave Los Angeles for Genoa City.

Flo arrives at the office door as Summer presses Wyatt about why Sally relocated to start over. Wyatt manages to extricate himself from the conversation by saying he has a call to make. After he exits, Flo joins Summer and introduces herself. She couldn’t help overhear what they were saying. Summer asks if she knows Sally. Flo replies, “Do I ever.” She then tells Summer that whatever she thinks she knows about Sally probably only scratches the surface. 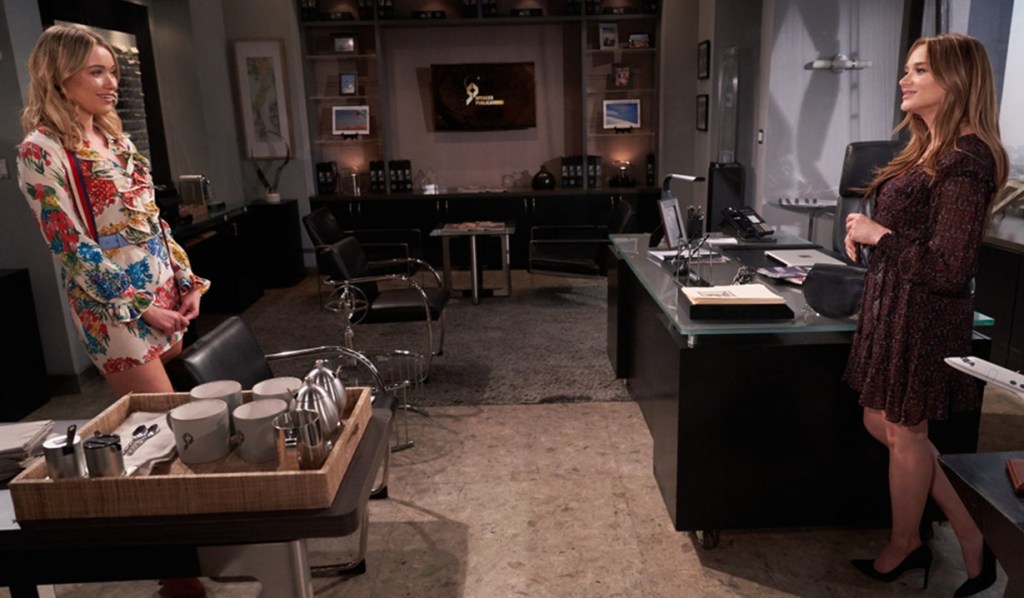 Finn joins Steffy at Forrester Creations. She’s relieved to see him and asks how he’s feeling, knowing she could be carrying his baby. Finn updates her on his confrontation with Liam and the warning he gave him. Steffy reminds him she and Liam share responsibility for what happened and apologizes again. She assures Finn her feelings for him are stronger than ever and she wants the baby to be his. 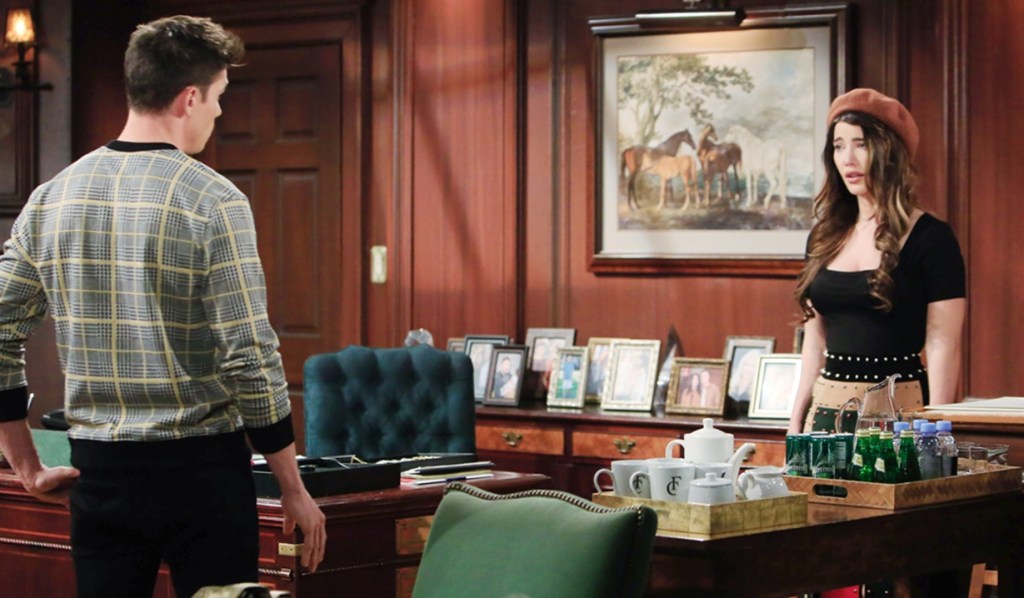 Hope enters Brooke’s house and calls out, but no one’s there. Liam arrives and wants to talk. Hope just can’t believe they’re in this place again. Liam says it’s killing him. He goes over how much he loves living with her in the cabin and reflects on risking it all away because he lost faith. Liam questions why he didn’t know she wouldn’t kiss Thomas. “I blew us up over a mannequin.” He regrets what he’s done to her… and to Steffy, but reiterates that he wants a life with Hope. Tearfully, Liam comes to the realization that he’s asking Hope to forgive what he wouldn’t. “I’m sorry,” he gasps.

More: Meet the one woman who can save Liam now 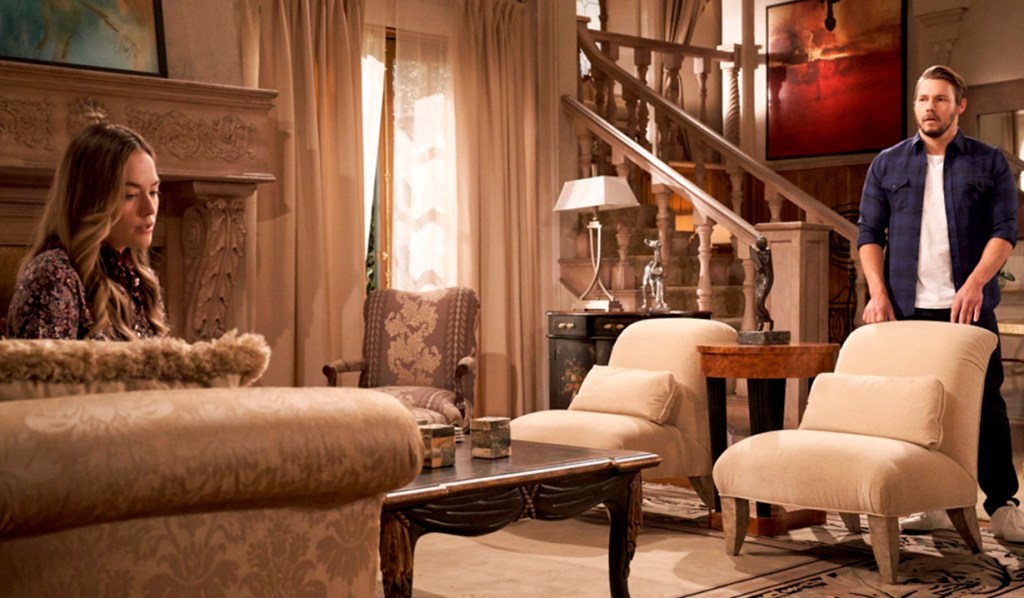 Next on The Bold and the Beautiful: Flo hints to Summer she has information on Sally.

See Hope and Liam love story gallery below. Get your free daily soap-opera fix for The Bold and the Beautiful — and all of the other daytime dramas — delivered straight to your email inbox by signing up for Soaps.com’s newsletter.

Accusations and Warnings Fly as Hope...

Thomas' Eyes Nearly Pop Out of His...