Friday, January 15, 2021: Today on The Bold and the Beautiful, Hope accuses Steffy of sabotage, Finn puts Liam on notice, and Zoe stuns Zende. 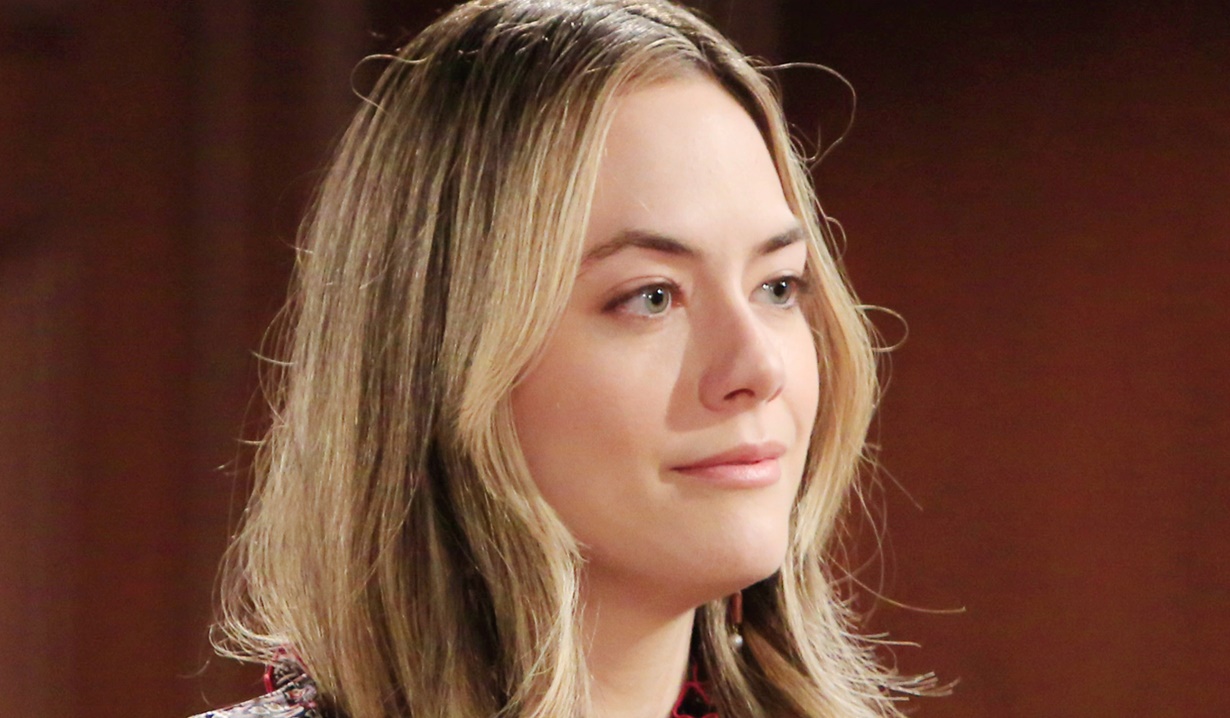 At Forrester, Hope wants Steffy to say she wanted Liam. Steffy denies it. Hope wonders what she’d call it then — she had sex with him and now she could be pregnant with his child. She invites Steffy to tell her side of the story as long as she’s honest about what happened that night. “How did you end up in bed with my husband? I really want to know.”

More: Why Hope and Liam’s relationship should end

Hope asks how many times Steffy refilled Liam’s drink that night. Steffy insists she told him to go home to Hope. Hope argues that she thought that what he saw was impossible but slept with him anyway. She accuses, “You sabotaged my marriage again!” Steffy points out her life isn’t wrecked since Liam wants a life with her. Steffy loves Finn. Hope sneers, “You wanted Liam. You wanted to be with him. How could you do that to Finn?” Steffy doesn’t know, but she can’t lose him, especially not now when she could be having his child. 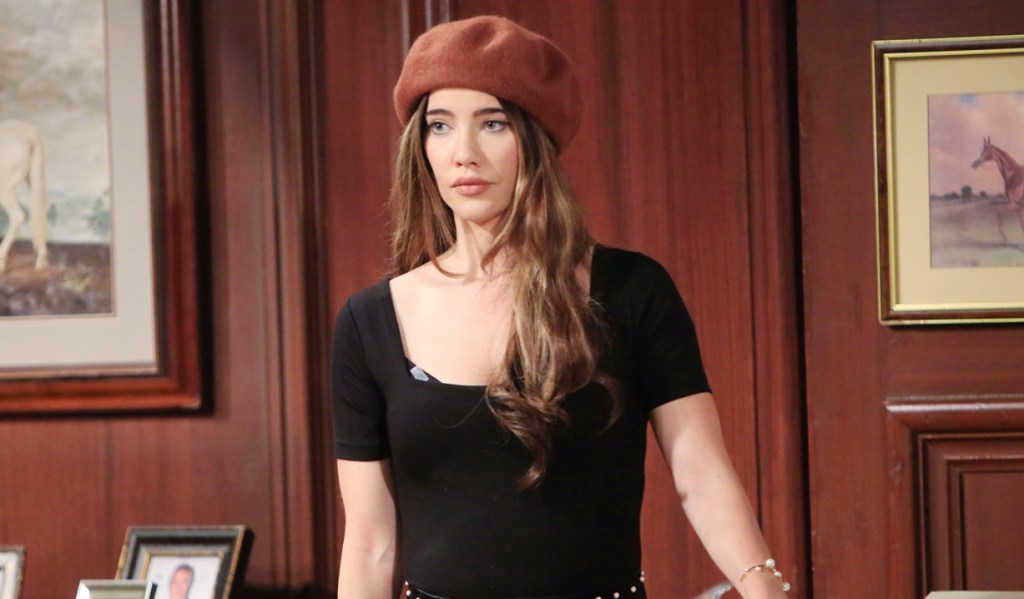 Hope wonders what kind of woman gets herself into this kind of mess. She muses that it’s a name Taylor used to call Brooke, but she won’t stoop to that level. Hope calls her selfish and again accuses her of dreaming of the night Liam would show up needing her. She snarks about the fantasy picture still hanging in the living room and asks, “What is your intuition telling you? Who’s the father? Is it Finn or is it Liam?”

At the cliff house, Finn insists Liam didn’t come over there that night looking for sympathy. He was looking for Steffy — because he wanted her! Liam knows how Finn must feel, but — Finn interrupts to argue the point of Liam not going into Thomas’ apartment to confront him. He left, and then cheated on his wife because his ego got wounded. 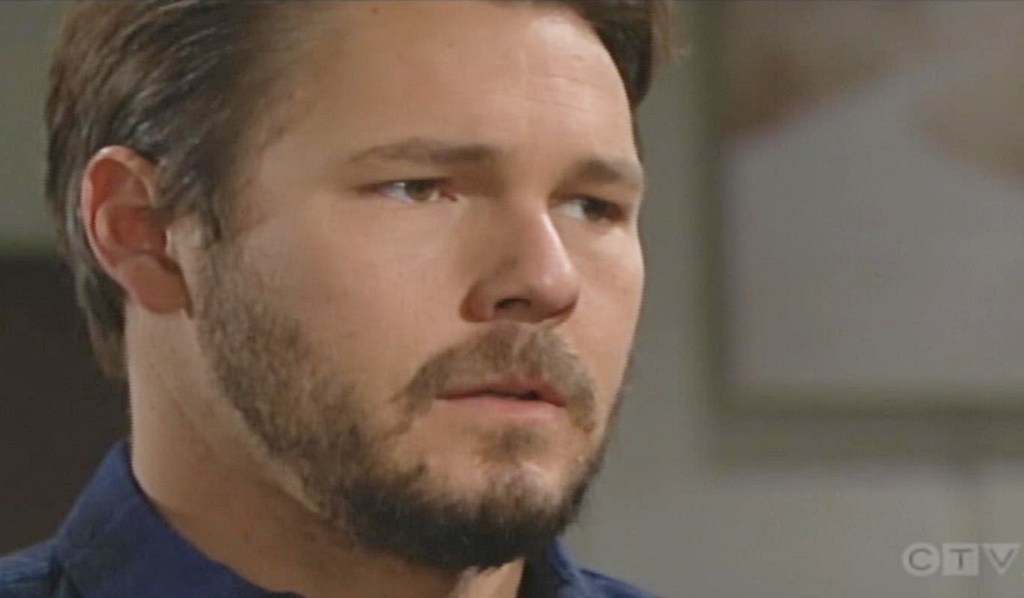 More: Listen up, Liam, ’cause we need to talk

Liam insists the cheating wasn’t deliberate, it was all due to a misunderstanding. Finn’s not buying it and blames the portrait he sees hanging up every time he comes over. He came over there to do what he’s been doing for years. Finn fumes, “It never ends!” Liam takes the blame and feels horrible — he hopes Finn is the father of Steffy’s baby. Finn recalls that Thomas warned him this would happen; he always circles back to Steffy. He puts Liam on notice and warns, “If I am the father of this baby, you are going to have a very different relationship with Steffy.” Liam argues, “It’s not your call.” Finn recalls how Liam questioned him in the beginning of their relationship. He won’t stop him from seeing Kelly, but if that child is his, those days (he gestures toward the portrait) are over.

In the design studio, Zoe talks about sharing secrets. Zende calls Zoe out for flirting with him when she’s engaged and asks, “What’s going on here?” Immediately after, he says he was joking and manages to mention how beautiful she is. He still senses something is up with her, however. Zoe reveals Carter wants to set a wedding date.

Zende thinks it’s normal to feel overwhelmed while planning a wedding, but Zoe admits that’s not the problem. “I’ve been thinking about you, Zende.” She recalls the immediate spark between them when they first met and asks if he feels this too. Zoe asks if he ever thought about what could have been between them if he’d told her not to marry Carter.

Zende feels conflicted as Carter’s his friend. Zoe presses him to think about what they could be. Zende won’t deny the sparks between them, but relays that Paris kissed him earlier. He feels she’s just nervous about Carter wanting to set a wedding date, but Zoe protests she’s never felt as she does for Zende about anyone. “What if we’re meant to be together?” Zende can’t cross this line because of Carter and tells her, “It’s not going to happen.” 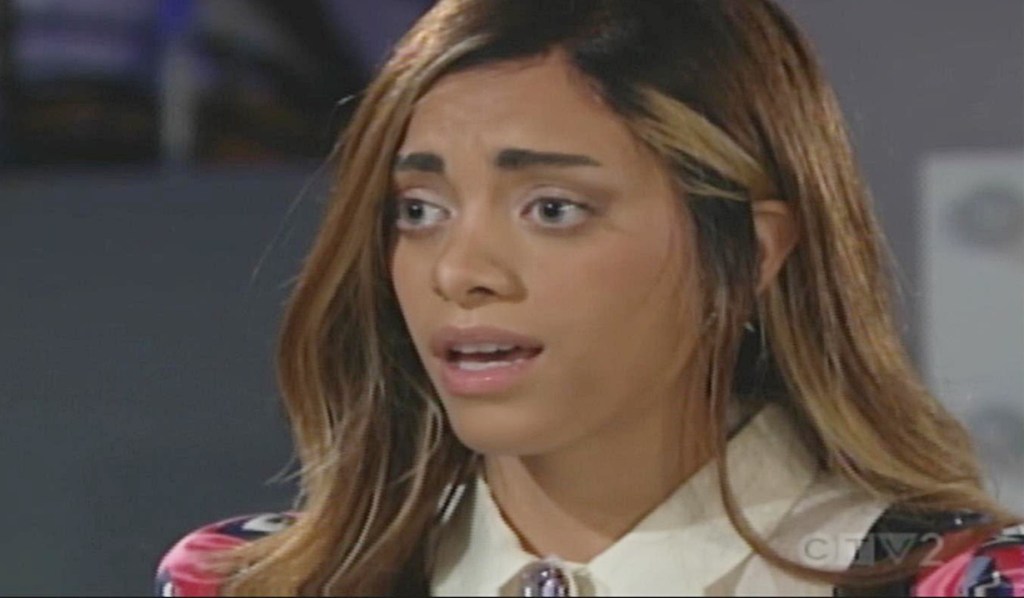 Next on The Bold and the Beautiful: Wyatt introduces Bill to a beautiful stranger.

See Hope and Liam’s wedding gallery below. Get your free daily soap-opera fix for The Bold and the Beautiful — and all of the other daytime dramas — delivered straight to your email inbox by signing up for Soaps.com’s newsletter.

<p>Hope was rushed to her wedding ceremony in the back of a truck. The 2012 nuptials almost didn’t happen as Liam and Hope were manipulated behind-the-scenes.</p>

<p>Puglia, Italy provided a gorgeous backdrop for an al fresco wedding. Hope and Liam pose in front of colorful streamers on their big day.</p>

<p>Hope and Liam exchanged their vows overlooking the sea in Puglia, Italy. Earlier, the pair had indulged in romance while touring around the town.</p>

<p>At the officiant’s signal, Liam plants a kiss on his new bride. Hope and Liam were pronounced husband and wife in Italy after many trials and tribulations.</p> <p> </p>

<p>Hope and the wedding officiant look on as Bill hugs Liam. Bill manipulated to keep the marriage from happening by springing Hope’s father, Deacon Sharpe, from jail and bringing him to Italy.</p>

<p>Hope poses for a wedding photo with her stepfather, Ridge, and her mother Brooke. The clifftop overlooking the sea where the ceremony took place was breathtakingly beautiful.</p>

<p>Hope looks in the mirror and reflects on her wedding day. She is glowing and beautiful in the ivory strapless gown, simple jewelry, and elegant half up-do hairstyle.</p>

<p>Liam looks debonair in his silver-grey tux and black silk bowtie prior to the wedding. He strikes a pose for the camera ahead of the ceremony.</p>

<p>Hope poses on the staircase in Brooke’s living room. She smiles at the camera in her elegant gown, holding her bouquet.</p>

<p>Hope and Liam wear matching smiles as they pose in their wedding gown and tux. The happy couple can’t wait to be wed.</p>

<p>Brooke, Carter and Wyatt pose with the happy couple on their wedding day. Brooke and Wyatt stood up for the couple while Carter performed the ceremony.</p> <p> </p>

<p>Hope touches Liam’s lapel as they smile together. The happy couple pose for the camera in their gown and tux on their wedding day.</p>

<p>Brooke makes a happy mother-of-the-bride on this special day. Here she poses in her baby blue strapless gown.</p>

<p>It’s a big smile for this Logan girl on Hope’s big day. Bridget poses in a light orange chiffon gown complemented by ruffles that warms her complexion.</p>

<p>Father and daughter share a sweet embrace. Bridget was happy to make an appearance at home with the family for Hope’s wedding to Liam.</p>

<p>Eric and Quinn look amazing together in this shot. Quinn is wearing a peacock blue gown with jewelry she designed herself and which complements Eric’s silverish-grey pinstripe suit with champagne silk tie.</p>

<p>Hope poses with her aunts, Katie and Donna, and her half-sister Bridget. The Logan girls were all in attendance on Hope’s big day.</p>

<p>Taylor attended Hope and Liam’s wedding with Steffy. She wasn’t happy about it as she felt Liam should be with her daughter.</p>

<p>Ridge clasps his brother Thorne’s shoulder as the duo poses at Hope and Liam’s wedding. It’s not often they get along so well! They both look amazing in formal wear in different shades of blue. </p>

<p>Katie in an exquisite off-white gown, poses with her date for Hope’s wedding. Thorne is wearing a baby blue suit complemented by a midnight blue silk tie that sets off his eyes.</p>

<p>Bridget stands for a photo with Ridge and Thorne. The Forresters have reunited to help celebrate Liam and Hope’s special day.</p>

<p>Wyatt, who was Liam’s best man at the wedding, poses with Sally. The redhead wore a slinky silver cocktail gown that was just her style, while Wyatt rocked a tux with bowtie.</p>

<p>Emma and Xander came to the wedding together. The Forrester interns were happy to help support Hope and Liam on their special day, especially since Emma was such a big fan of Hope. Emma wore an adorable silk cocktail dress in pastel colors, while Xander looked dashing in his hip formal wear.</p> 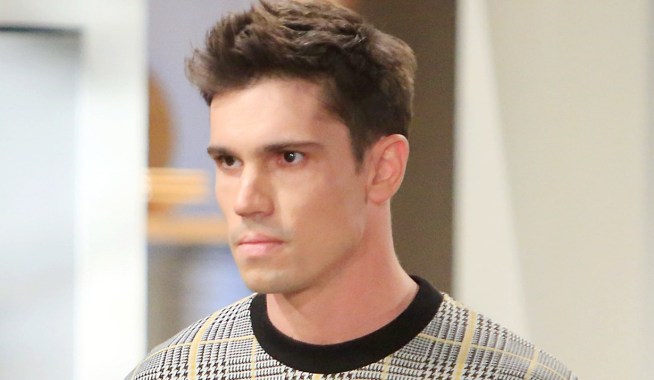 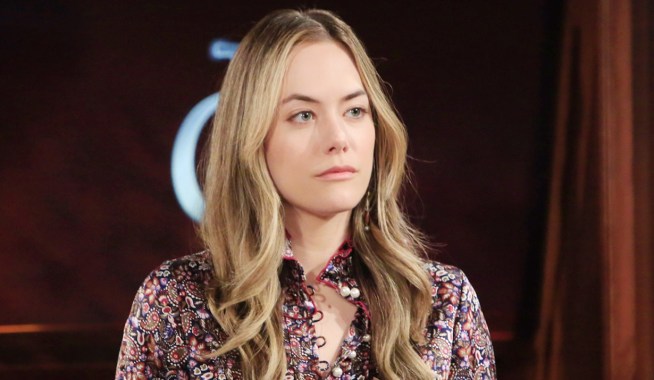