Quinn Spikes Brooke’s Juice With Vodka After Threatening Her

Friday January 31, 2020: On Bold and the Beautiful today, Steffy's dismayed by Ridge's confession, Sally confides in Katie, and Quinn and Brooke continue their battle. 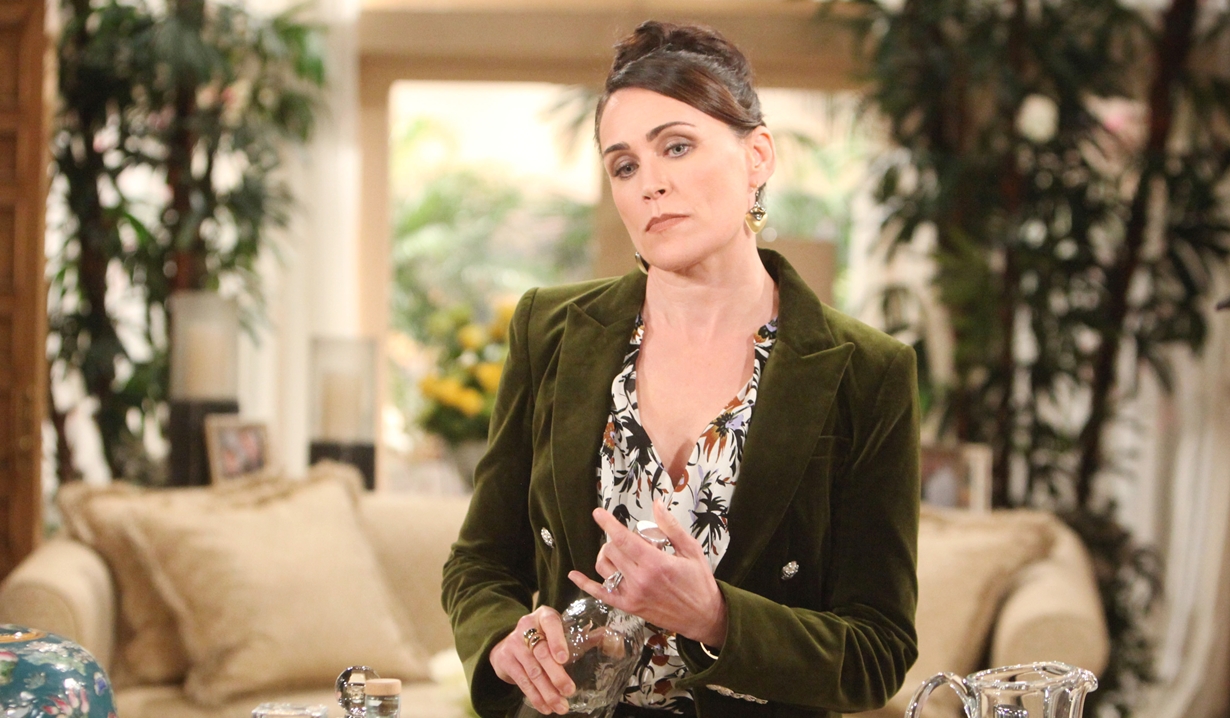 Katie interrupts Wyatt in Bill’s office as he sends Sally a text saying they should talk – he cares about her and doesn’t want her hurting. After Katie pries, she learns he reunited with Flo and is glad. Wyatt expresses his worry over Sally and hopes she’s doing okay. He explains she’s not accepting the break-up. Katie knows Sally is a survivor and will be fine. Wyatt thanks Katie for the support and they hug.

At the hospital, Dr. Pappas tells Sally they’ll run a few tests to see what they can find out. As Sally sees the text from Wyatt, she learns she needs to have blood drawn, but it could take a while since there are patients ahead of her. Sally paces as she waits and contemplates sending Wyatt a text back to see if he’s available now. A nurse opens the door to advise Sally it won’t be long just as Katie’s passing by. She joins Sally in the doctor’s office to tell her Wyatt’s concerned about her. Katie asks why she’s there and encourages her to talk about it. Sally confides she feels there’s something wrong medically and she’s a little scared. Katie can relate and offers to stay. 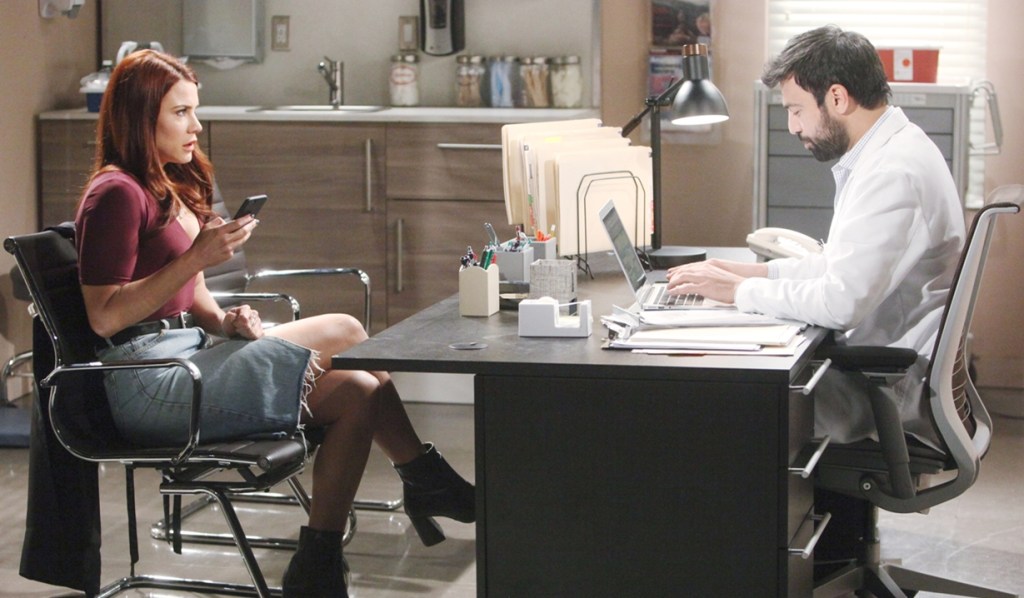 In the Forrester office, Steffy questions Quinn feuding with Brooke. She isn’t pleased to learn Ridge kissed Shauna and reminds him what that woman did to her. Ridge explains Brooke blames Quinn. They debate whether or not Quinn has changed from the woman who first came to town as Steffy recalls having had her own issues with her in the past. She’s confident things won’t get out of hand. Ridge hopes not – the last thing Brooke needs is a war with Quinn. 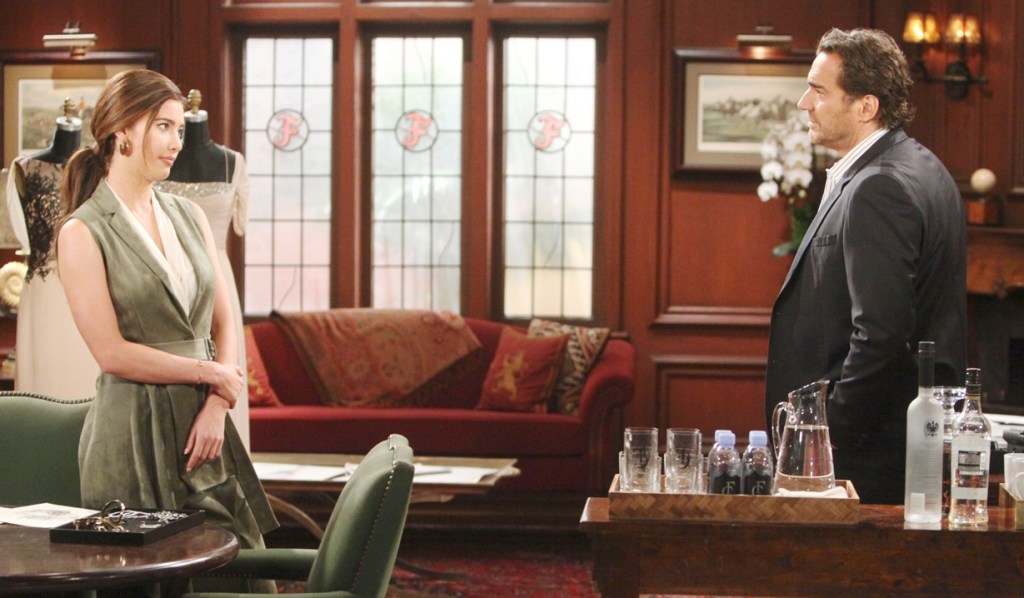 Quinn and Brooke continue their feud in the Forrester living room. Brooke tells Quinn her days are numbered as Mrs. Eric Forrester. Quinn points to Brooke not drinking any more as proof people can change, insisting she’s a different person. She points out they’ll still be connected even if Brooke manages to get Eric to leave her – her son is with her niece. Brooke’s disappointed to hear Wyatt’s back with Flo and thinks she belongs in the desert. Quinn warns her not to interfere and talk turns back to Brooke trying to get Eric to leave Quinn. Quinn advises Brooke she doesn’t have to like her, they can go back to faking it. Brooke asks, “And what if I can’t?” Quinn warns she’ll regret it, and intones, “Go up against me and you will lose,” she says. Brooke gasps over Quinn threatening her. Quinn’s sorry her marriage is over but it’s not her fault. She doesn’t want to fight with her, but she will. Quinn feels she can get both Eric and Ridge to take her side – she can guarantee it. Brooke smirks. She can see Quinn is as devious and dangerous as ever and wonders if she’ll push her off a cliff or lock her in a cabin. Brooke turns her back to take a call and Quinn spikes her juice with vodka. Brooke disconnects and issues another warning to Quinn before raising the juice to her lips. 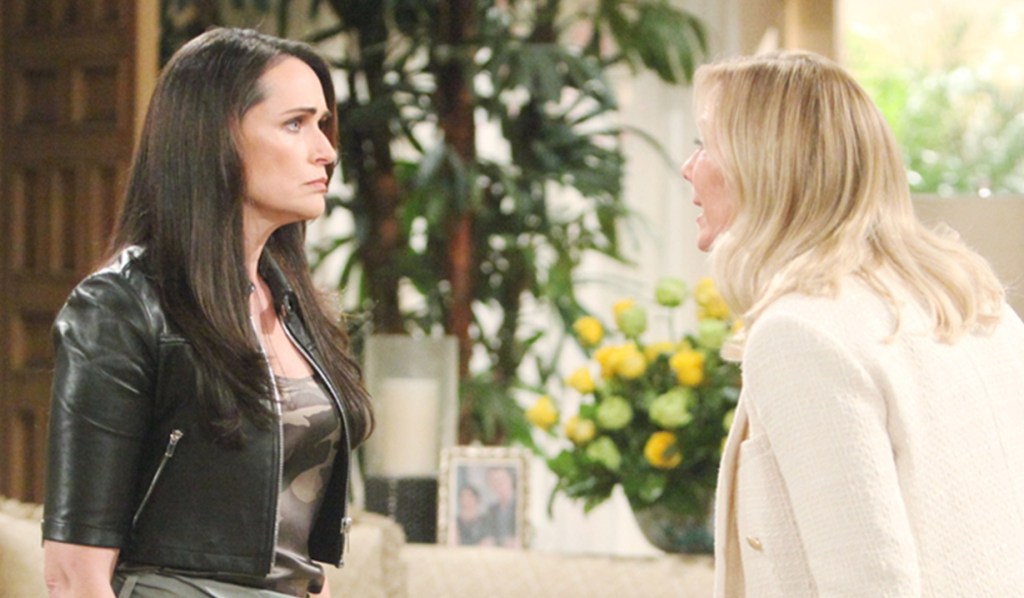 Sally Consults a Doctor as Steffy,...

As Bold and Beautiful’s...

MacGyver Scoop: The Heated Moment That Would Have Led to That First Kiss