Hope Hesitates During Wedding Vows As Phoebe Calls Out ‘Mama’

Friday July 19, 2019: On Bold and the Beautiful today, Brooke takes a final stab at stopping the wedding, a drunken Flo argues with Zoe, and Ridge and Brooke speak at the nuptials.

Upstairs at home, Brooke pleads with Hope not to marry Thomas – he’s using her compassion for Douglas to get her to marry him. Hope tells her mother it’s best if she goes downstairs if she can’t understand – she’s going through with the wedding; she has to. Downstairs, Liam needles Thomas that Hope may have had a moment of clarity. Pam, Quinn and Eric worry about Thomas, but Ridge reassures them he’s fine. Thomas asks Steffy to go upstairs, but Brooke appears and relays Hope will be down in a minute.

At Forrester Creations, Zoe tells Flo she can’t go to Hope’s wedding. Flo argues she can’t let Hope marry Thomas. Zoe notices she’s been drinking. Flo assures her she’s called a car, but she has to attend – she’s a Logan. She frets that this marriage shouldn’t be happening. Zoe asserts that telling the truth will only make things worse for everyone, but Flo argues – why should everyone suffer for what her father did? They can undo the wrong that’s been done and Xander would forgive Zoe – they have to do the right thing. As Flo rants, Zoe tells her to keep her voice down. Flo drinks more alcohol. Zoe wants her to go home, but Flo insists they have to stop the wedding – none of this would be happening if Hope knew Phoebe was really Beth!

At Brooke’s house, Hope descends the staircase to the Wedding March and Thomas smiles. Hope looks at Liam, holding the girls, and flashes to their wedding. 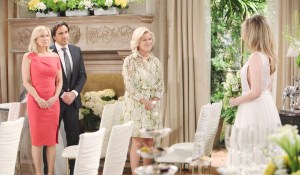 At the altar, Hope whispers to Steffy, “The girls look beautiful.” Steffy replies, “So do you.” Carter begins the ceremony and references Douglas, who is almost as happy about today as his daddy. He talks about Thomas and Hope finding love in the shadow of loss, then invites family members to speak. Ridge says he’s proud of Thomas and is happy to see the three of them standing up there – he’s grateful they found each other. Brooke rises and states that marriage is sacred and a lifelong commitment – it should be an expression of passion and love – that’s what she wants for Hope; she wants her to have the marriage she deserves. 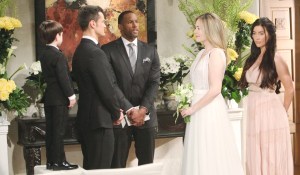 Next, Thomas tells Hope everything he’s done has been for the family they’re building, and he’ll do anything to protect it. Hope smiles at Douglas as Thomas continues and says he loves her. He prompts Douglas to say it too. Carter has Hope and Thomas hold hands to complete their vows. Thomas says ‘I do’ and when it’s Hope’s turn, Phoebe blurts, “Mama. Mama.” Steffy apologizes. Carter asks Hope again. She looks at Brooke and Liam as she hesitates. 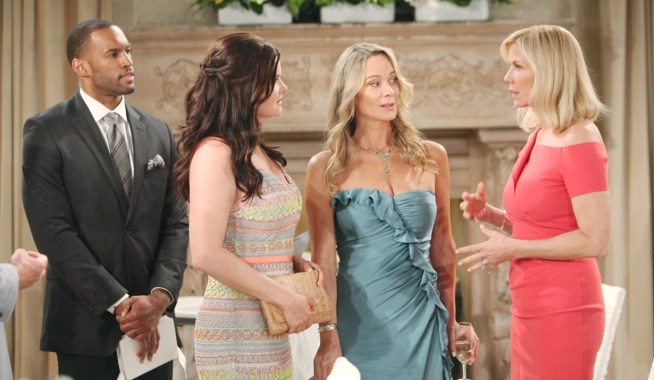 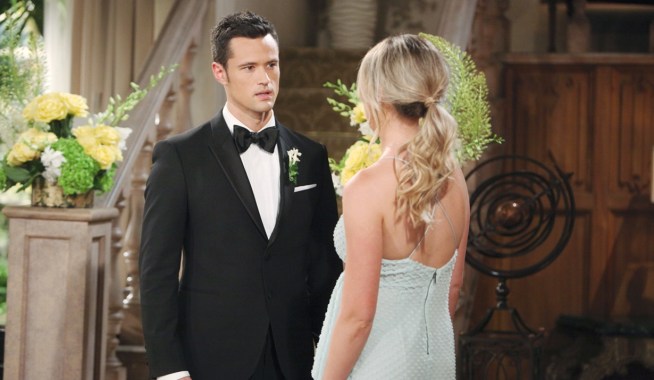