Thursday June 27, 2019: On Bold and the Beautiful today, Ridge becomes irritated by Brooke's view of Thomas, Liam expresses outrage at Thomas' advice to Hope, and everyone at the cliffhouse is stunned by Hope's slip up. 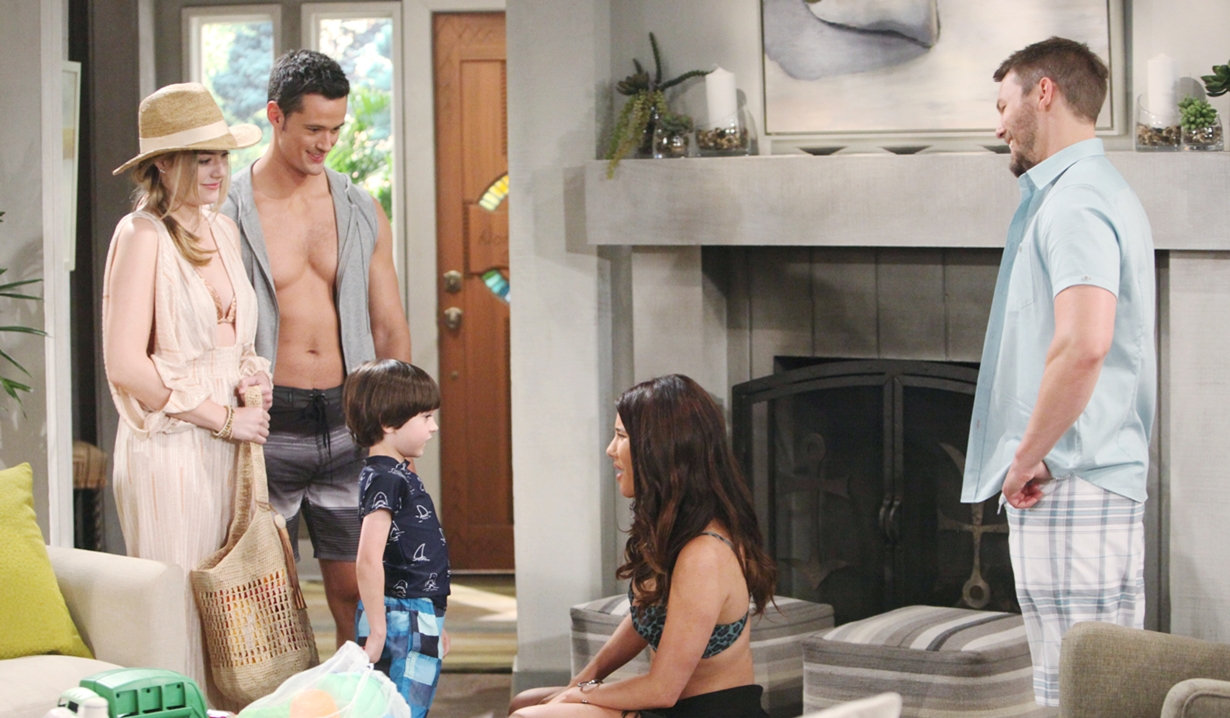 At Brooke’s house, Hope tells her mother she’s going to Steffy’s with Thomas. Brooke’s not sure spending time with Thomas is helpful. In his room, Thomas takes a call and tells someone he has a big day planned. Downstairs, Hope assures Brooke she can handle a day at the beach. Ridge appears as Brooke clucks that it will be hard to see Liam and Steffy together. Upstairs, Douglas isn’t sure he wants to go to the beach. Thomas insists they must go – and they want Hope to go. Douglas agrees. 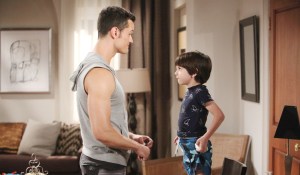 Thomas muses this is a day he doesn’t want to miss and reminds his son to give Hope a big hug when he sees her. Downstairs, Ridge thinks Hope should go and have fun, but Brooke disagrees. Douglas and Thomas appear and the boy leaps into Hope’s arms. Hope promises her mom she’ll be fine. There’s a knock. Thomas opens the door to his friend, Vinnie, (played by Joe LoCicero). After Ridge and Brooke greet him, they step outside. Thomas pays Vinnie for drugs and is assured it will do the trick. Later, by the pool, Brooke and Ridge debate whether Hope should rush into a relationship with Thomas. Ridge suggests she give Thomas a break – he’s not stuck between two women and is just there for Hope. Brooke respects how he feels. Ridge asks her not to be so negative about his son. Brooke wishes Thomas would realize Hope needs space. Ridge thinks he may be part of her journey back to herself – could Brooke be open to that? Brooke doesn’t respond.

At the cliffhouse, Liam and Steffy discuss Emma’s death was and worry about having a beach party so soon after. Liam thinks it’s fine, but isn’t thrilled about seeing Thomas. Steffy mentions Hope may come along. 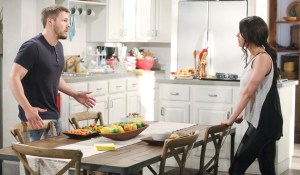 As they prepare, Liam reiterates that he doesn’t trust Thomas or his interest in Hope. He worries about his ex-wife being okay there. Steffy reminds him this is what she wanted and says Thomas may be good for her. Hope, Thomas and Douglas arrive and Steffy greets Douglas as Hope tells Liam it’s good to see him. Thomas suggests Hope take Douglas in the water, which irritates Liam. He whispers to Steffy about Thomas using Douglas. When Thomas helps Steffy with drinks, Liam warns Hope he doesn’t trust Thomas. Watching them, Thomas fondles the pills in his pocket. After, talk turns to Emma. Thomas repeats his lie about her pushing her dance agenda. Phoebe awakens and Thomas warns Hope about spending too much time with her. Liam expresses outrage. Hope likes being around her. Steffy hands the baby to Hope and she inadvertently calls her Beth. Everyone looks stunned and concerned.

Throwback Thursday! On June 27, 2017, on The Bold and the Beautiful, Julius urged Nicole not to sign the adoption papers, while Wyatt gushed to Liam about the respect he had for Katie.

Thomas Drugs Liam’s Drink As He...