Friday June 14, 2019: On Bold and the Beautiful today, Ridge shares news with his wife, Brooke's leery of Thomas, and Hope makes a request of Liam. 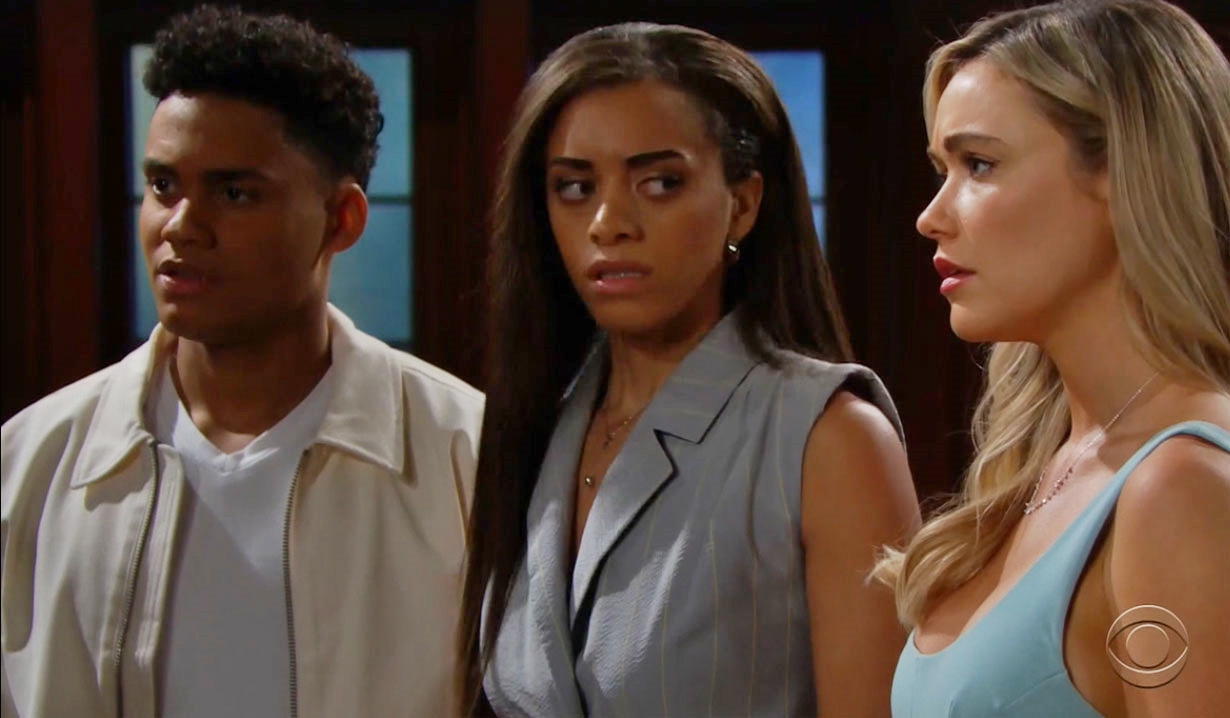 In the cabin, Thomas implores Hope to move on as Liam has and to choose him. 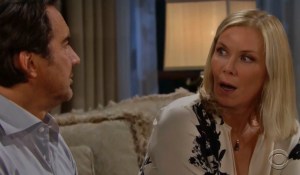 At home, Ridge talks to Steffy by phone and learns Liam has moved back in. After, he and Brooke look at Thomas’ designs for Hope for the Future. Brooke finds it a little edgy and worries about him losing sight of what the line stands for. Ridge warns he has news. Brooke asks, “How much will I hate it?” Once Ridge has filled her in, Brooke says Hope hasn’t been thinking straight since Beth died. Ridge reminds her they can’t get lost in the kids’ lives. Brooke suggests they travel but she can’t leave Hope and Ridge wants to be around for Thomas, the ‘heir apparent’ designer. Brooke has reservations about him. 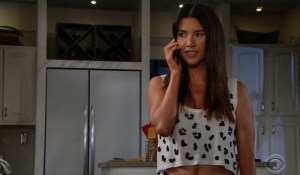 In the cliffhouse, Steffy disconnects from Ridge as Liam appears. Liam wants to help out and urges her to ‘use him and abuse him’. Steffy glances at his beer and knows he’s hurting and thinking of Hope. Later, Liam gets a call from Hope, who asks him to send pictures of him and the girls together. He agrees, hangs up, and tells Steffy. They admire his photo of Phoebe.

At Brooke’s house, she’s appalled at Hope asking Liam for pictures. Hope says the photos make her happier than anything. Brooke feels she can still remarry Liam. Hope receives photos and tells Brooke and Ridge that Phoebe triggers something in her she thought was reserved for Beth. Later, Brooke tells Ridge she’s concerned about Thomas’ intensity toward Hope.

At Forrester Creations, Flo, Zoe, and Xander wonder why Thomas summoned them there. Thomas arrives and reveals he won’t be telling Steffy or Hope the truth and neither will they…not ever. They learn Liam’s moved back to Steffy’s. Flo hollers, “This is so wrong!” Thomas won’t justify himself to the trio. He declares tragedies happen and you pick yourself up and keep going; that’s what Hope will do. Thomas chalks it up to fate and alludes to them keeping quiet if they want to keep working on the line. Xander accuses him of thinking only of himself and feels threatened. Thomas warns about the consequences of clearing their consciences. He feels his destiny is with Hope and advises them to keep quiet and he’ll see they reach their goals. Xander isn’t cowed, but Thomas vows he’ll destroy Zoe’s life and see she goes to prison…Xander will wish he was behind bars, safe from him. Xander agrees…for Zoe. After, Xander feels they made a deal with the devil – Thomas is obsessed with Hope!

At the cabin, Thomas finds Hope looking at photos of Liam and urges her to put the phone down. Brooke peeks in as he holds her and narrows her eyes. Hope turns framed photos face down and Thomas slyly deletes the photo on her phone.

Thomas Keeps Quiet About Beth and...