Liam Squares Off With Thomas Over Hope

Thursday May 9, 2019: On Bold and the Beautiful today, Liam visits Wyatt to find out what he's walking into, Zoe questions Flo's advice to Hope, and Flo discovers the reason Sally moved out. 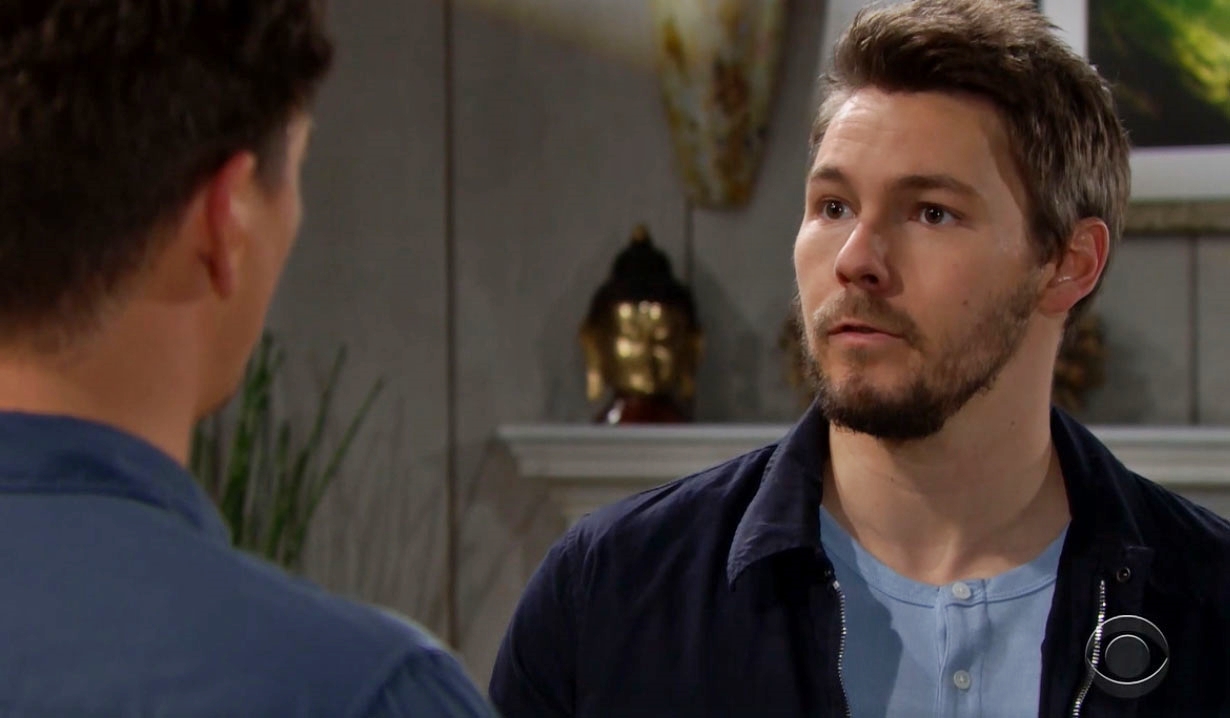 Liam arrives at the beach house and Wyatt asks, “Shouldn’t you be home?” Liam wants to know what he’s walking into first. Wyatt tells Liam that he thought Sally was fooling around with Thomas, but her confession revealed that Thomas still loves Hope. Liam calls Pam and learns Hope’s at the office…and Thomas is too. Liam informs Wyatt that Thomas did this once before. Talk turns back to Sally. 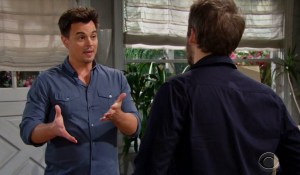 Wyatt reveals she moved out and Liam’s appalled. Wyatt protests – she did it on her own and he doesn’t know where things stand. He switches back to Thomas – so this is what he does? Liam recalls Thomas told him Hope was ‘in good hands’ when he left for Paris. He vows the guy won’t bulldoze his marriage under the guise of giving his kid a mom.

At Forrester Creations, Flo tells Hope she doesn’t like the sound of this Thomas guy. Hope feels Thomas is just offering her a future with a motherless child. Flo thinks he’s just trying to break up her marriage. In the design office, Thomas questions Sally moving out of the beach house. 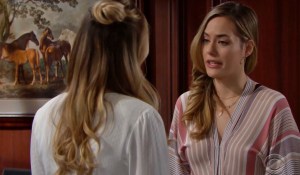 He apologizes for involving her, but still intends to pursue Hope. They debate whether Liam can stop it. Later, Zoe finds Flo alone and asks if she’s out of her mind – she overheard Flo earlier with Hope and wonders why she’s talking her out of a chance at motherhood. They debate how much solace Hope’s marriage has brought her. Zoe thinks the way to do right by those they’ve wronged is to let Hope become a mother – why not to Douglas? Flo questions how much they’re willing to let Hope lose. 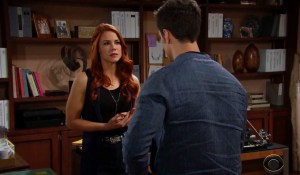 Zoe advises Flo to let herself embrace this new life. Once alone, Flo takes a call from Wyatt, who asks her to stop by his house. Elsewhere, Thomas has designs to show Hope for her line. She says she’s busy, but he insists on waiting. Hope admires the drawings then sends him to ask the dressmakers a question. Thomas asks her to dinner with her and Douglas. She’s hesitating when Liam enters. He missed holding his wife and had to come home. Thomas guesses Wyatt called him and told him about his feelings for Hope. Liam angrily calls him out for trying to break up a grieving couple and take advantage of Hope’s vulnerability. Thomas counters that they’re a couple, but not a family – Liam has a family in Paris. Liam loves the girls but also loves his wife. He orders Thomas to stop the guilt-tripping…now!

Flo arrives at Wyatt’s house and learns Sally moved out. Wyatt reveals Sally was keeping something from him – Flo’s never done that. Flo learns about the secret and theorizes that sometimes people keep a secret to avoid hurting someone. Wyatt hates lies and secrecy – he never had to worry about that with Flo.

Quinn and Sally square off.

Sally Blames Thomas for Breaking Up...

Liam Asks Hope to Choose Between Him...