Flo Confesses to Shauna That Phoebe Is Hope’s Daughter

Tuesday April 16, 2019: On Bold and the Beautiful today, Flo asks Shauna to go along with her lie, Brooke wonders if Flo will have a change of heart, and Bill and Quinn have an amicable conversation. 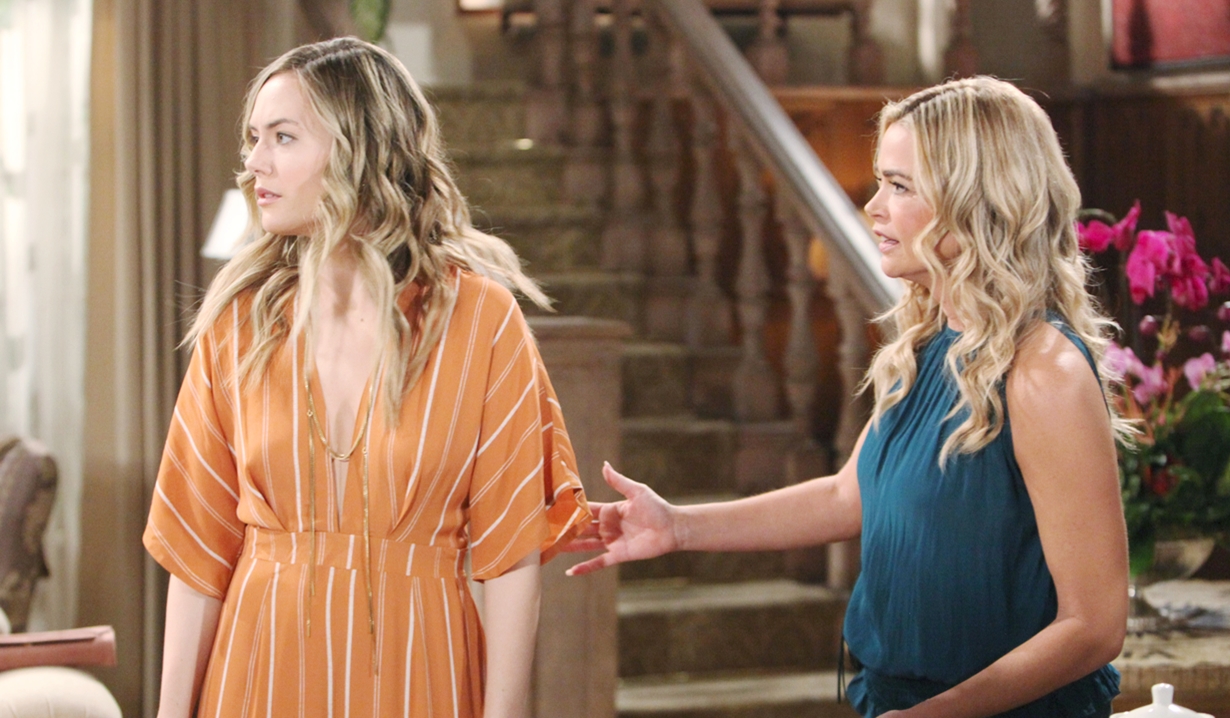 At Brooke’s place, she wonders why Shauna would insist Flo was never pregnant. Shauna replies, “Because it’s the truth.” She tells Flo, “You’ve never been pregnant and never given a baby up for adoption, this is ridiculous.” Hope assumes Flo isn’t close to her mom and didn’t let her in on the pregnancy. 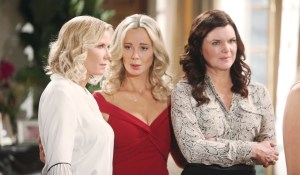 The Logans decide to give them a moment alone and step aside with Wyatt to whisper about the awkwardness. Across the room, Flo asks Shauna to go along with her on this and she’ll explain later. Hope approaches to apologize. Flo says, “We’ll work it out, right Mom?” Wyatt takes a minute with Flo to express his surprise Shauna didn’t know. Flo reassures him and thanks him for his support with a hug. 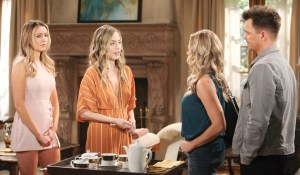 Flo rejoins the others and explains she and her mom have a lot to catch up on. The Logans remind her she has the family’s support now. After Flo and Shauna leave, the Logan women marvel at the revelation that Storm had a daughter. Brooke wonders if Flo might change her decision about her baby. Hope warns not to go there for now. Brooke thinks Shauna and Flo have a lot to discuss.

In Bill’s office, he marvels that Quinn’s telling him Flo, who they just found out is Storm’s daughter, is also the biological mother of Steffy’s adoptive daughter. Quinn can’t believe all that’s happened and exclaims, “What are the odds?!” She goes on about how strange it is Bill hooked up with both her and Shauna. Bill knew he couldn’t be Flo’s father – he doesn’t make girls and thinks he’s biologically incapable. Quinn talks up Flo and says Shauna raised a beautiful human being. Bill tells Quinn, “So did you.” She wonders if he’s feeling okay. He says he may have a slight fever. Next, Bill observes that Will has a new cousin, and Quinn reflects that Flo has no idea how much her life’s changed. Talk turns to Wyatt returning to Spencer Publications. They bicker over whether he was fulfilled at Forrester Creations. Quinn hopes the move pays off. Bill reminds her it’s his birthright; why waste his time at the dress farm? Quinn acknowledges Bill loves his sons – it’s his only redeeming quality. Bill counters that Wyatt is the best thing Quinn has ever done. She just wants him happy and believes the chances have improved with Flo back in the picture.

At Flo’s place, she goes on about her father until Shauna cuts her off – why does everyone think she had a baby and gave it up for adoption? Flo explains how she posed as a birth mother for her friend Reese who was arranging an adoption. Shauna asks where he got the baby. Flo admits the mother though her baby was stillborn – it’s Hope Logan. “Hope is Phoebe’s birth mother.”

Shauna Agrees Flo Must Confess to...