Flo’s Guilt Compounds As Hope Gushes About Their Family Bond

Friday April 12, 2019: On Bold and the Beautiful today, Bill fills Justin in on his paternity scare, Donna, Brooke, and Katie speculate on what Storm's future might have been, and Shauna reveals why she kept Flo's father a secret. 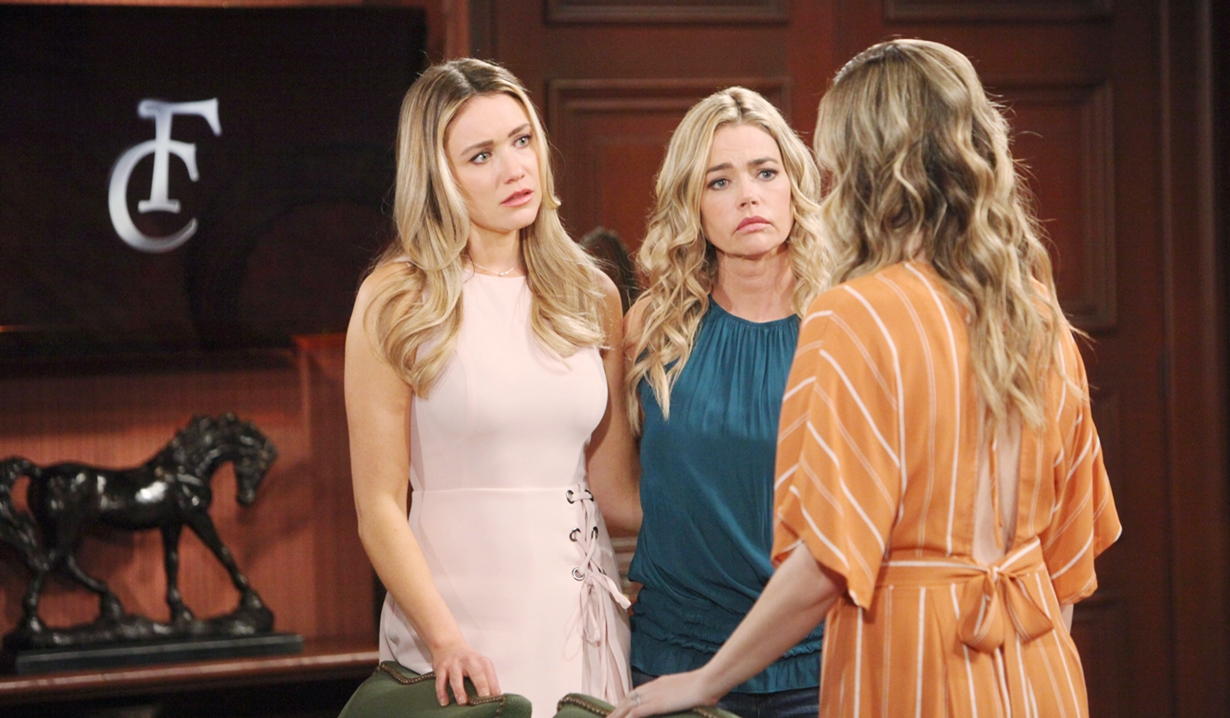 At Forrester Creations, Hope digests the news that Flo is her cousin – it’s why she feels so connected to her. Wyatt thinks they must be in shock. Shauna is introduced to Hope, Quinn beams, and Wyatt pulls out his phone to show the DNA results again. They look at the photo of Storm and Hope enthuses to Flo, “You’re a Logan.” Flo asks Shauna if she knew all along. Shauna didn’t – there were a few men in her life at that time – she honestly didn’t know until the DNA results came in. Quinn explains they were all together when Wyatt got the email. Wyatt says the Logans are good people. Flo knows. 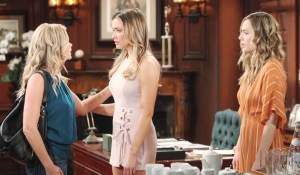 Hope adds, “You’re one of us.” Shauna tells Flo that Storm would have been a devoted father. Hope agrees, then breaks the news that Storm passed away. Flo reels. Hope says his family is Flo’s family now. Flo looks concerned when Hope declares they’ll be a part of each other’s lives forever. She assumes this was what Flo was trying to tell her and goes on about the bond they’ve shared before saying, “So this is your big secret.”

At Brooke’s place, she, Donna, and Katie think it’s a shame it’s been so long since they talked about Storm – they have to ensure his memory never dies. Katie says Storm wanted to know they’d be there for each other – they need to make sure Hope and the next generation carries on that legacy. They reminisce about Storm and recall his generosity and compassion. Katie believes he cared about them more than himself, though she’d never allowed him to do what he did if she’d known. He gave up his life for her and she has to experience the happiness and joy he gave up. They speculate on what Storm’s future would have been like – he always wanted to be a father. Donna recalls doing a DNA family tree with their father, and how he broke down over leaving them; it affected Storm most. Katie reflects that Storm gave up having a child of his own for her.

At Spencer Publications, Justin talks to Bill about closing on some acquisitions now that they’re not going into the fashion business, but Bill’s unfocused. Justin asks what’s going on? Bill reveals he’s thinking about a Logan, but it’s not Katie. Bill explains about Flo, laughs that he’s not the father and jokes about the therapy bills if Flo had been Wyatt’s sister. Justin wonders what the Logans have to do with this. Bill says, “Wait until you find out who the father really is.” Justin’s exasperated as Bill gives ‘hints’ before revealing Flo’s father is Storm Logan. They rehash Storm dying to keep Katie alive. Bill muses he has Will because of Storm.