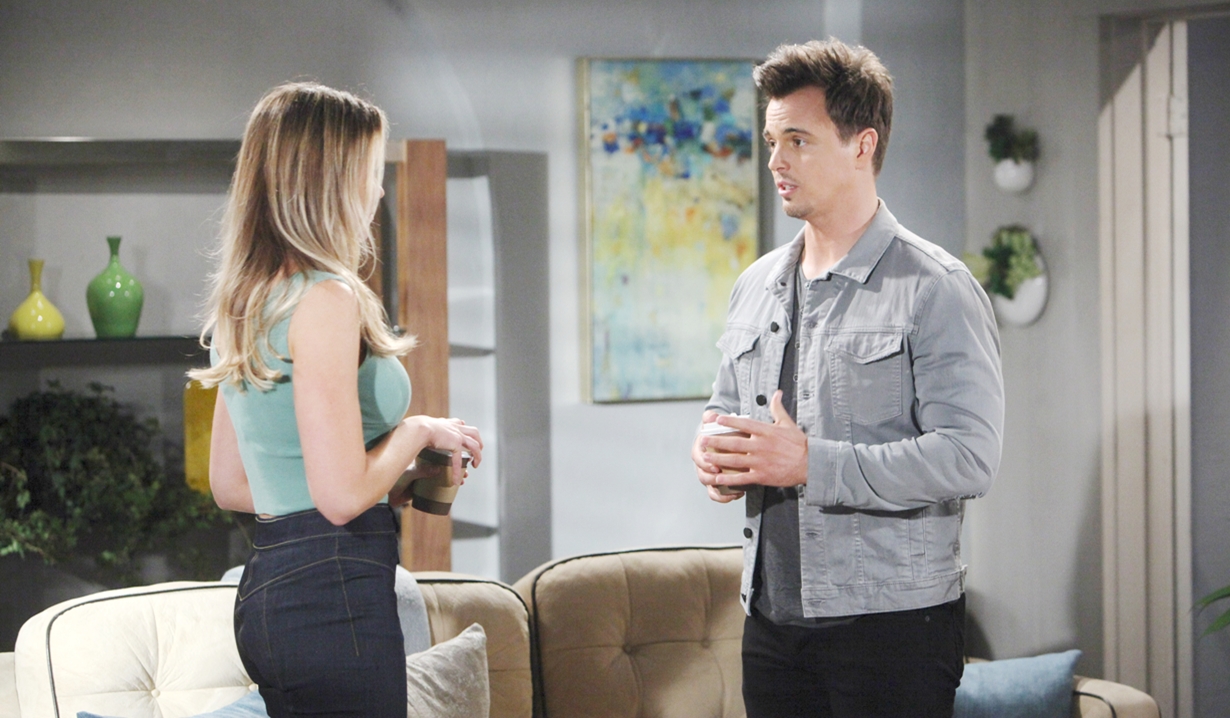 At Spencer Publications, Justin needles Bill about Katie, who asks him about Donna in return. Talk turns to business and Quinn before Katie and Will arrive. Katie asks if it’s a bad time. Bill says, “For you and my son? Never.” Will makes a remark on his parents laughing together and Katie and Bill tell him how much they love him. Will reveals he may want to be a lawyer and make lots of money. They joke about Will displacing Justin, who can travel the world. Will adds, “With Aunt Donna.” They laugh that he’s relentless. 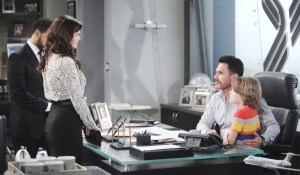 After Justin exits, Bill counsels Will that sometimes determination isn’t enough – other people might have different ideas about how they want things to turn out. Katie and Bill don’t want him to get his hopes up about them. Will states if they don’t get back together he’ll give them $500 – but he knows he won’t have to.

At Forrester Creations, Quinn enthuses to Eric that she reached out to her former best friend, Shauna, who is in L.A. to see her daughter Flo – she’s on her way over. She worries about the reason her mother kept her father’s identity a secret. Pam opens the door to announce Shauna. Quinn and Shauna giddily embrace, and Quinn introduces her to Eric. After Pam calls Eric away to a conference call, Shauna and Quinn recall their days as single moms raising their kids together. Quinn relays she saw Florence, who is so special. Shauna asks about Wyatt. Quinn crows that he’s just great – he’s perfect in spite of her. Shauna insists Quinn is an awesome mom and is so happy for the positive changes in her life. They look at old photos and relive memories. Quinn recalls Wyatt always believed he and Flo would marry someday – her mistake cost them their future. Shauna feels things happen for a reason. 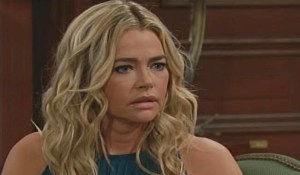 Quinn recaps how she came to be with Eric, and relays that Wyatt found his dad. She thinks it’s time Flo does too. Shauna bristles – her attitude toward Flo’s father hasn’t softened and she’d think Quinn would understand that. Quinn had to adjust her attitude for Wyatt’s sake. She shares that he’s a jerk, but he’s loaded. When Quinn says his name is Bill Spencer, Shauna, stunned, exclaims, “Wyatt’s father is Bill Spencer?!”

Wyatt checks in at Flo’s place to see if she got anything back from the DNA kit. 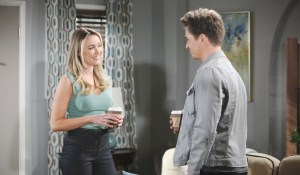 Flo hasn’t had any results yet and is anxious. Wyatt talks about Bill, who has done some things he could never do, but notes he’s trying to be better. He’s not sorry Bill is in his life, however. Flo wonders how her mother will react once this DNA test comes through – every time she’s brought up her father, she completely shuts her down. Wyatt’s hopeful Flo’s father or a relative will surface in the DNA database. Flo’s grateful to have him there as she goes on this journey.

Shauna Reveals Wyatt & Flo Could Be...