Wednesday March 13, 2019: On Bold and the Beautiful today, Donna teases Katie about Bill, Wyatt, Sally and Justin weigh in on Bill's love life, and Steffy summons Hope and Liam to the cliff house. 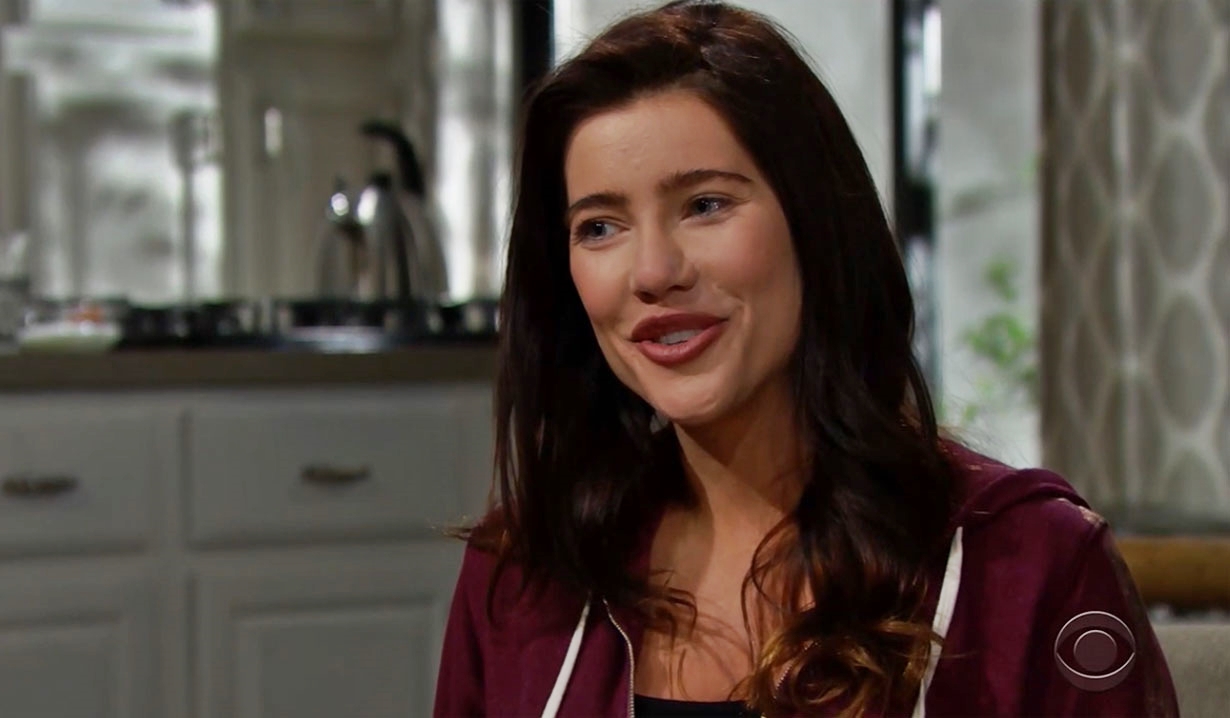 At the cabin, Liam takes a call from Steffy, who wants him and Hope to come over. Liam disconnects and updates Hope – he has no idea why she wants to talk to them.

In Forrester Creations’ design office, Katie and Donna discuss Bill stepping up for Will. 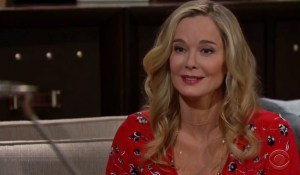 Donna remarks that Katie looks glam today and teases about her seeing Bill. Katie insists he wasn’t on her mind when she got dressed. Donna persists that she’s falling for him again. Katie points out they married twice – it didn’t work out either time. Donna quips, “Third time’s the charm?” She can tell Katie’s still yearning to have her family together and reconcile with Bill. Katie doesn’t want Donna setting her up – her life’s not a romance novel. Donna muses it could be.

At Spencer Publications, Wyatt and Sally discuss the design house with Bill. Justin notes there are some legal issues before mentioning Bill spending time with Katie. Wyatt thinks it’s great. Bill insists he and Katie are merely proud parents. Justin and Wyatt sarcastically say they 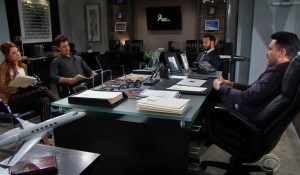 totally believe him, and Sally notes the three of them do make a pretty cute family. Bill feels Katie probably wants space after Thorne, but Sally urges him to go for it. Justin believes reconciling with Katie is the next step after reconciling with his sons. They remind him of the importance of family. Bill has a meeting and chortles he has to run. He urges them to work instead of focusing on his love life. Later, Donna arrives, greets Justin warmly, and updates him, Wyatt and Sally that she believes there’s a chance for Katie and Bill. Donna learns Bill’s gone to Il Giardino and says Katie’s on her way there too.

At the cliff house, Steffy has some news that doesn’t just affect her; it affects them too. She needs to go to Forrester International in Paris to make sure things are running smoothly over there. 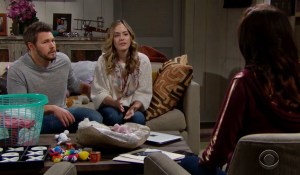 She’s bringing Amelia to help with the girls and will be leaving in a couple days. Steffy hopes her time away will also help Hope get past the tragedy of losing Beth. Liam agrees a breather would be helpful. Hope feels bad that Liam won’t be seeing the girls. Steffy warns her not to go there again; the girls will be fine. Hope reflects on her connection with Phoebe, and holds the child when Steffy brings her out. Steffy urges Hope to take time to heal and consider starting a family – she can see her beautiful maternal instinct. Liam and Steffy agree she was made to be a mother.

At Il Giardino, Katie spots Bill and relays she’s supposed to meet Brooke. Bill had a meeting, but the person hasn’t shown up. Katie joins Bill, who’s pleased at the prospect of them sharing lunch.

Katie and Bill come to a realization.

Reese Convinces Zoe to Keep His...