Zoe Lashes Out at Flo After Interrupting Her Confession to Hope

Tuesday March 5, 2019: On Bold and the Beautiful today, Liam congratulates Wyatt, Steffy thinks about being with Liam, and Flo runs into a familiar face. 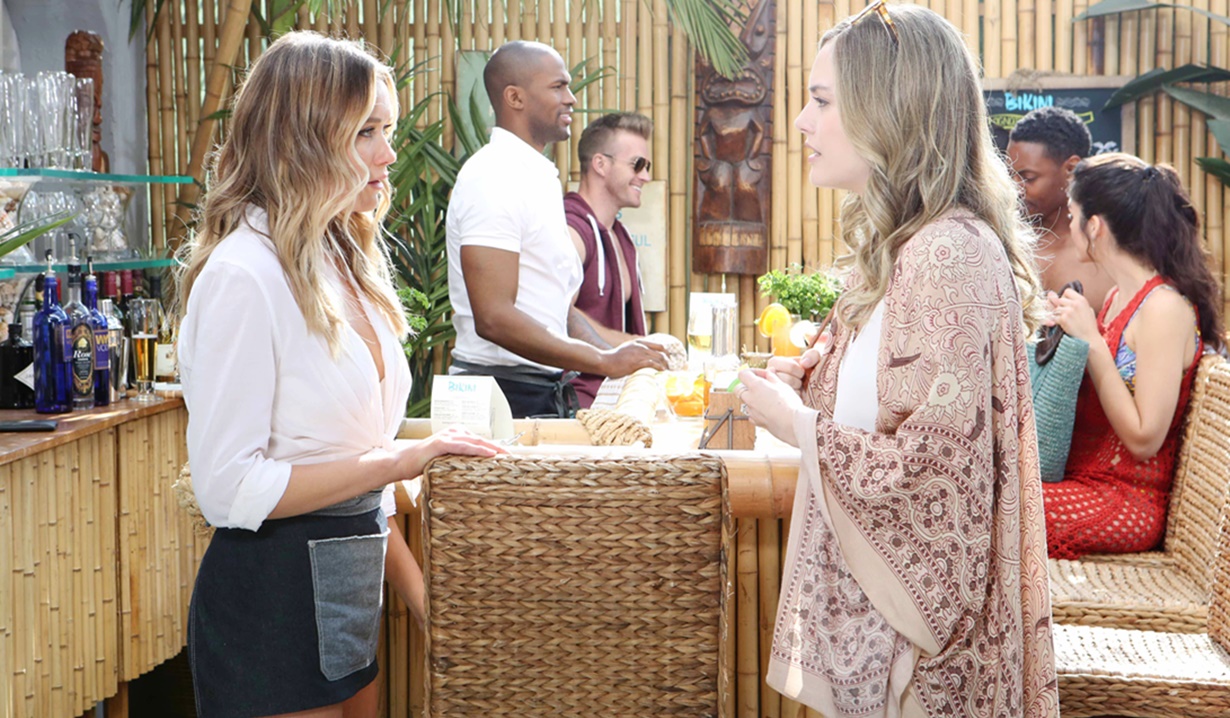 At Bikini Bar, Hope is about to leave when Flo says she has something to tell her. Flo hates what Hope’s been through and adds, “There’s something you don’t know about me.” Zoe appears and asks Flo what she’s doing. They notice she’s lost her accent. She explains it’s a bet she and Xander are doing. Zoe then reveals to Hope she knows who Phoebe’s biological mother is – it’s Flo. Hope remarks how difficult a decision it must have been to put her daughter up for adoption. Flo tears up as Hope explains how Phoebe’s been a gift to her and promises she’ll have a wonderful life. After Hope goes, Zoe confronts Flo – she was going to tell Hope that Phoebe was Beth! Flo argues Hope deserves to know the truth. Zoe reminds her what could happen to her father, and to Flo. She won’t let her father go to jail and urges Flo to leave town. Flo feels so terrible about what she did. Zoe warns they could all be locked up. Flo feels the truth will come out and thinks maybe Reese deserves to be jailed. Zoe begs Flo to quit the job and leave L.A.

At the cliff house, Steffy and Ridge admire Phoebe – 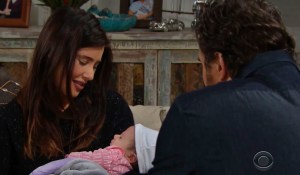 it feels like she was meant to be part of their family. Ridge wishes he could meet the birth mother and thank her. He offers to babysit and Steffy thinks that’s sweet. Ridge marvels – she doesn’t think he can do it! Steffy agrees to bring the girls to work so he can show them off, and assures him she’s managing fine and Liam’s been great. They recap Hope wanting him to move in there, but he’s committed to both Hope and the girls. Once alone, Steffy thinks about Hope’s words – she could have a life with Liam again.

In the cabin, Liam shows Wyatt photos of himself with the girls. 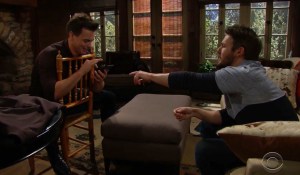 Wyatt realizes his brother loves spending time with Kelly. Liam would like to be a father figure to Phoebe as well. Wyatt thinks that’s natural and he’ll be their ‘funcle’ or fun uncle. Liam laughs out loud, then turns serious – he doesn’t judge Phoebe’s birth mom but can’t understand her decision to part with her child. Talk turns back to Hope wanting him to be with Steffy and the girls. Wyatt asks what he really wants. Liam states he won’t give up on Hope or their marriage. He congratulates his brother on the move to Spencer, and Wyatt urges Liam to get in touch if he needs to talk – he and Hope will survive this. They embrace. Later, Hope arrives and tells Liam she met Phoebe’s birth mother.

After Zoe leaves Bikini Bar, Flo bumps into Wyatt. After a moment of realization, she gasps, “Wyatt Fuller?”

Flo Introduces Herself to Hope at...