Friday March 1, 2019: On Bold and the Beautiful today, Zoe's stunned to find Flo working at Bikini Bar, Liam and Hope continue their debate, and Justin's disgruntled about Bill's choices. 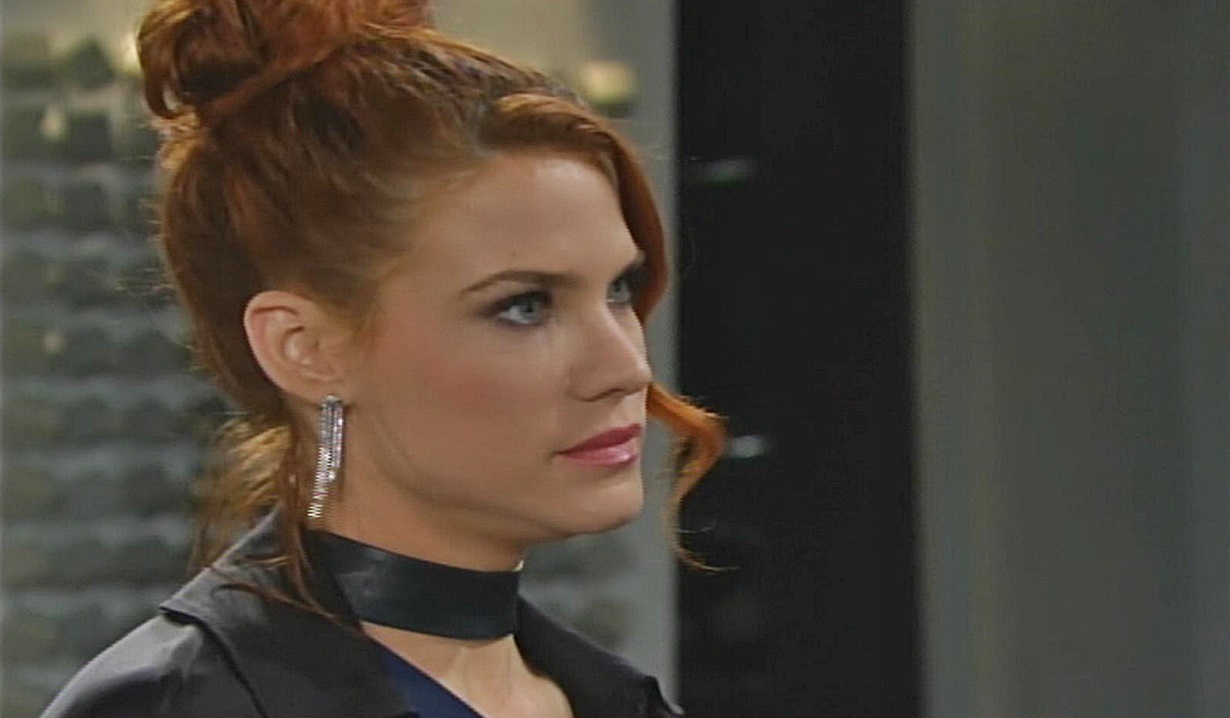 At Spencer Publications, Justin grumps to Bill that they’re not a fashion house. Bill calls him a ‘hater’ and reminds him this is about Wyatt, and if he can rectify some of the damage he did to Sally’s career, so be it, especially if it makes Wyatt happy. Wyatt and Sally arrive. Bill’s effusively happy, and chortles that Justin was just telling him he’s thrilled. Bill refers to Sally as a ‘smokin’ hot redhead’ before telling her the fashion business will be a learning curve for them. He adds that Justin, especially, loves a challenge. Justin mutters and exits, and Bill talks about being a different man – he feels terrible 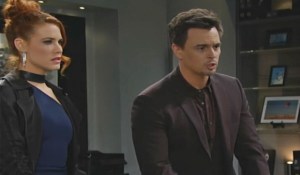 about what he did to Sally and Spectra Fashions. Sally’s thankful for this opportunity, but has to ask – is he really prepared to start up Spectra Fashions again? Bill stuns them by replying, “No. That’s not happening.” Wyatt goes off the deep end, but Bill clarifies he won’t fund Spectra Fashions…it must be called Spencer Fashions. He states Sally will be head designer and will have his full financial backing, but it must carry his name. Sally won’t pass up the business opportunity – they’re in.

At the cabin, Hope wants to give some of Beth’s things to Phoebe – she doesn’t want to part with them, but has to move forward. Liam asks her to promise she won’t remove her wedding ring again. Hope interjects that Katie wants to meet her at Bikini. Liam still wants to discuss the wedding ring. Hope sighs…she doesn’t feel right keeping him from those two precious girls. They debate. Hope repeats that she knows Beth is gone, but as a mother, somehow still feels she’s here. Liam assures her they’ll never forget Beth, but she can’t force him and Steffy back together or give up on their family. Hope’s frustrated – she can’t go through another pregnancy; she’s not meant to be a mother. Liam says she’s Beth’s mother and she can do it again. He will never give up on them.

At Bikini Bar, Danny, (played by Keith Carlos), tells Florence she’s a natural behind the bar and is doing great. Zoe arrives and asks, “Seriously, Flo? Are you out of your mind?” Flo takes a break and Zoe informs her she can’t work there; she shouldn’t be in Los Angeles at all. Flo is starting to like it there despite the small risk. 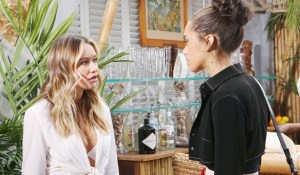 Zoe argues there’s a huge risk – she needs to return to Vegas or start over elsewhere. Flo talks about the guilt haunting her from what Reese dragged her into. Zoe reassures her about the baby, but Flo can’t get past the woman named Hope believing her baby is lost to her forever. Zoe still loves her father, but Flo argues what he did was awful, and adds, “Poor Hope.”

Flo Introduces Herself to Hope at...