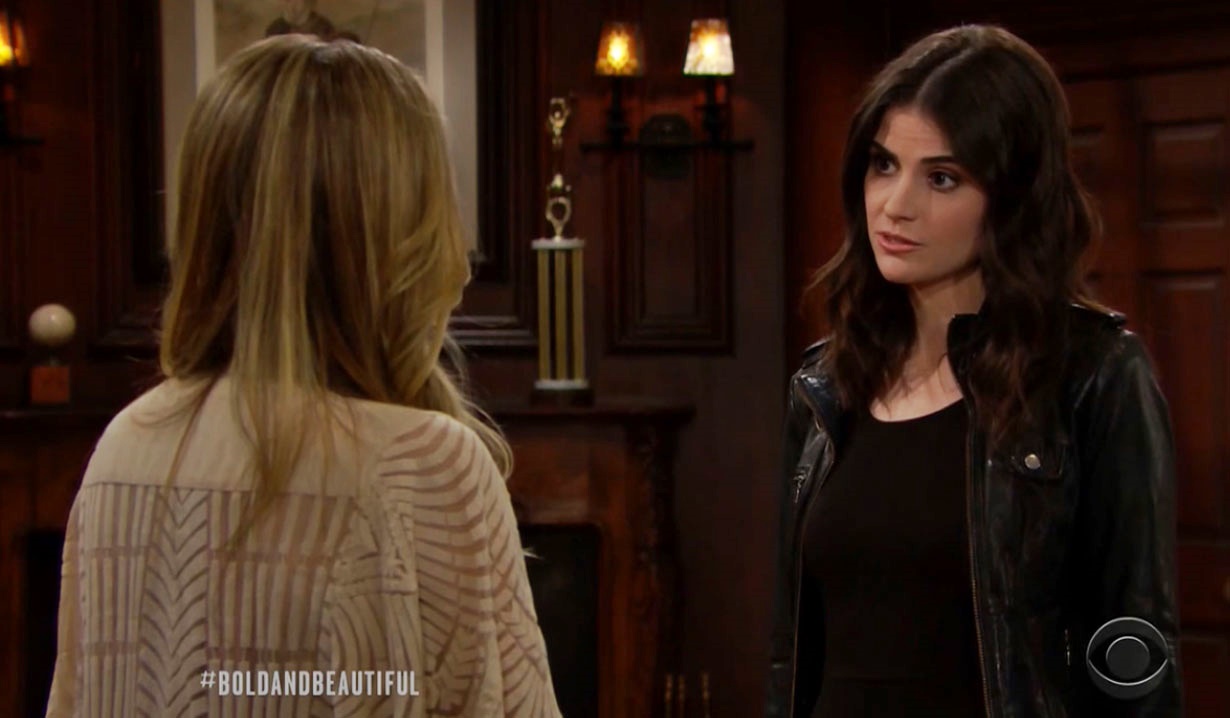 At Forrester Creations, a model named Raine, (played by Golden Globes Fiji Water girl Kelleth Cuthbert), lets Hope know that everyone is there for her. As she exits the office, Brooke observes how nice that was of Raine to say. 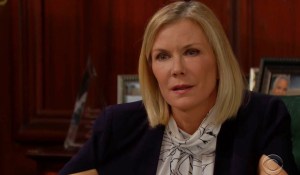 Talk turns to Hope’s grief. Brooke assures her there’s no timeline and advises she and Ridge think it will be good for Hope to work on her line. Hope says it won’t change what she’s thinking about. After, Hope calls a meeting for Katie, Sally, Wyatt, and Emma to reveal that Hope for the Future is coming back, which means she’ll have to put herself out there and address the loss of her daughter publicly. Wyatt assures her the marketing team is at her disposal, and Katie vows they’ll be sensitive to her. She asks if Hope’s certain she’s up for this. Hope knows she’ll have to relive it all, and wants to get it over with quickly. Katie and Wyatt approve Hope’s heartfelt press release and discuss the speech she’ll make. Hope wants a new focus on how important it is to support their daughters. She flashes to her delivery and breaks down in Katie’s arms.

At the cliff house, Steffy holds the baby and promises to one day tell her about her namesake. As she puts her to sleep she murmurs, “Mommy loves you so much, Phoebe.” Later, Brooke arrives looking to congratulate Steffy and welcome the new member of the family personally. Steffy tells her the baby’s down, 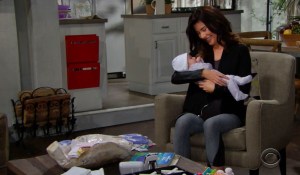 but should be up soon. Brooke relays that Hope’s testing the waters at work and they discuss whether it might be too soon. Steffy asks how Brooke is doing – she lost her granddaughter. Brooke concedes it hasn’t been easy, and she’s very happy for Steffy, but she’s still grieving. Brooke doesn’t think it was the ideal time for an adoption, but understands it all happened quickly. Steffy muses about Hope’s reaction when she held Phoebe. The baby cries and Steffy brings her to Brooke who whispers, “Precious,” then holds her. Steffy knows she’s thinking if only she was holding her granddaughter.

At Reese’s place, Zoe explains to Florence how she came to have the key to the apartment. Florence introduces herself. Zoe’s curious about her relationship with her father. 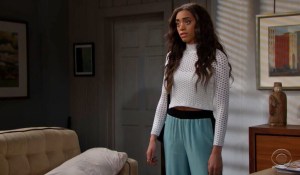 Flo reveals she met Reese in Las Vegas where she was a croupier. Zoe questions how they came to be living together. Flo says the move was never permanent, but she plans to stay there for now. Zoe’s puzzled about their arrangement and mentions the change in her father. She thinks Flo knows more than she’s letting on. Zoe goes on to say something really affected her father and asks if he told her about the events on Catalina Island. Flo dodges the subject. Zoe informs her she’s going to look around the place. She leaves Reese a voicemail to call her as she rummages around.

Sally and Wyatt make an observation about Kelly and Phoebe.