Hope Heads to Catalina Alone After Kelly Runs a Fever

Thursday December 27, 2018: Liam proves he's there for Steffy and Kelly, the mystery man issues a threat to Reese, and Xander supports Zoe. 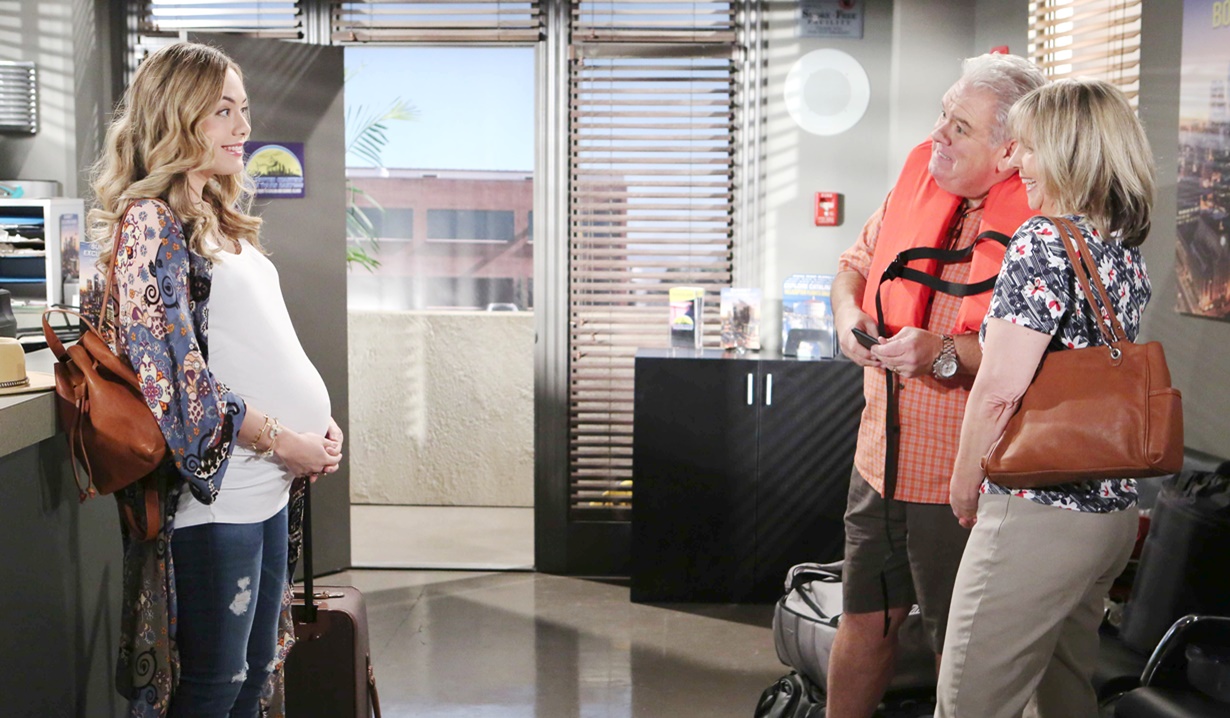 At the cliff house, Kelly is crying and Steffy discovers she’s running a fever. She calls the doctor’s office and is told to bring her in as a precaution.

In the cabin, Hope and Liam continue to make their plans for Catalina Island, before looking forward to Beth’s arrival in a few weeks. They canoodle as Liam admits he’s getting excited about their trip and rubs Hope’s baby bump. Steffy calls to update Liam on Kelly’s fever and at Hope’s prompting, he offers to meet her at the doctor’s office. After he disconnects, Hope says she’ll meet him at the airport. They kiss and express their love.

At Forrester Creations studio, Zoe reveals to Xander that her father has a problem with gambling – he’s always lived beyond his means, and she’s worried he’s in over his head again. Zoe thinks that’s why he came to L.A. She explains that rich women fall for him, thinking they’re with a prestigious doctor, but he sees them as an opportunity to get himself out of a jam. Xander’s supportive as Zoe worries Reese will do something really foolish one of these days. She talks about what it was like growing up as her father’s problems grew. Talk turns to their relationship and Zoe recalls they were mad about one another in London. Xander admits they grew apart, but his feelings never really changed. He says, “I love you, Zoe.” They kiss. 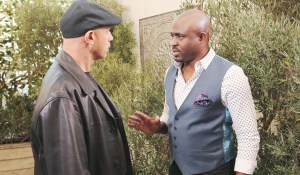 the mystery man won’t let Reese leave and demands he cough up the money he owes now. Reese explains he just got a new job at a clinic on Catalina, it will take him a bit to get the money. The man intones, “You either pay me or pay the consequences.” He won’t be leaving L.A. without the cash, and though he’s convinced to give Reese more time, he warns that his daughter, Zoe, might get hurt if he doesn’t come through.

At the airport Kieran and Matt Cannistra, (played by Monica Horan and Jim O’Heir), 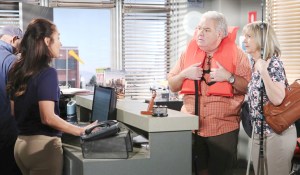 learn there are two seats available for them to Catalina if the two people who’ve booked them don’t show up. Hope arrives, they recognize her, and ask for a photo with her before learning she and her husband are on the flight. Hope looks startled at all their camping gear and Matt’s admission that he’s hoping not to throw up on the helicopter. Hope takes a call from Liam, who explains Kelly still hasn’t seen the doctor. Hope suggests she go ahead while he takes a seat on a later flight. It’s agreed.

At the doctor’s office, Liam assures Steffy he’ll always be there for her and Kelly.

Hope Goes Into Labor As Liam's...