Monday December 24, 2018: Maya gives her blessing, Reese has troubles, and Taylor learns Hope wants her to stay away at Christmas. 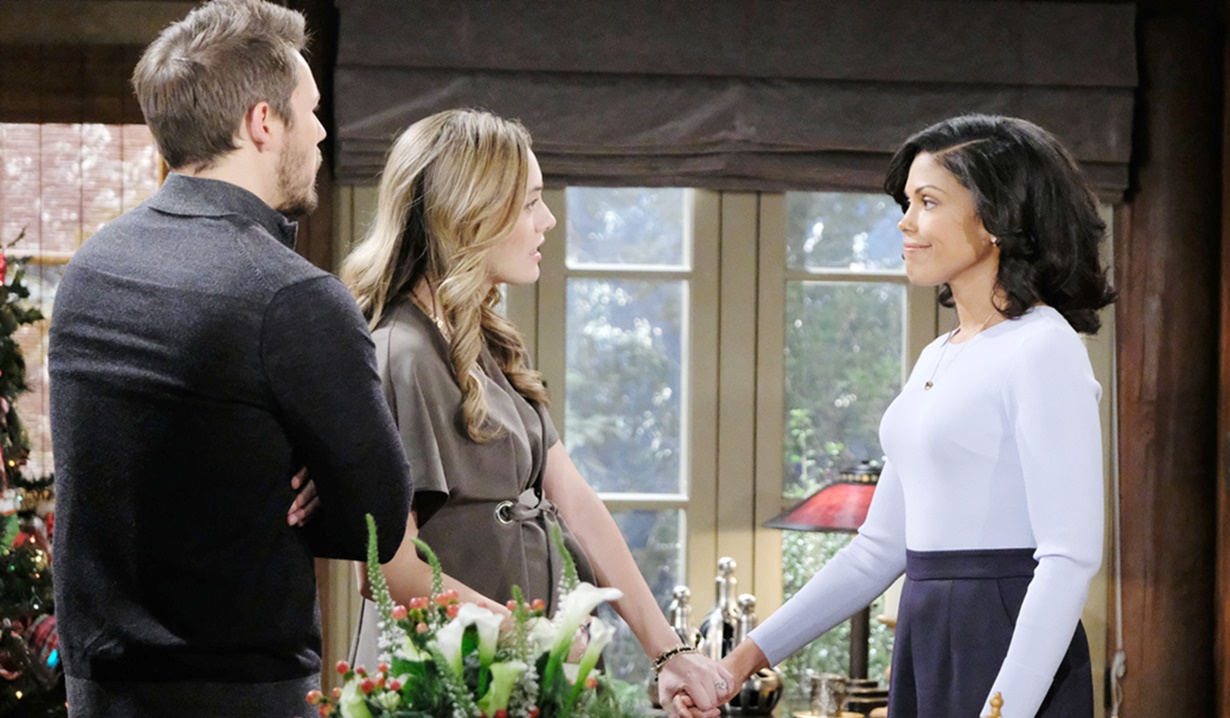 At Il Giardino, Taylor discusses Steffy’s adoption idea with Reese, who warns it could cost upwards of $50,000. Taylor would pay ten times that to make her granddaughter happy. Reese marvels at the revelation that Taylor’s loaded. Taylor wants to give him a gift for being so nice, but he only wants to spend more time with her. After Taylor leaves, Reese’s credit card is declined, so he pays with cash. When he stands up, he sees a man in a cap, (played by Andrew Johnson), entering, becomes alarmed, and takes off in the other direction.

At the cliff house, Hope continues to insist to Liam and Steffy that Taylor can’t celebrate Christmas with them. Later, Taylor comes home and updates Steffy that she’s been spending time with a man – Zoe’s father, Dr. Buckingham. When she explains he’s easy to open up to, Steffy asks if she told him about Bill. 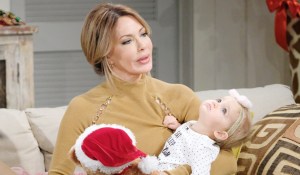 Taylor assures her she didn’t. Steffy advises her to go slow, but Taylor reveals that he kissed her. As they talk, Taylor senses something’s wrong. Steffy concedes that Hope came by earlier to discuss Christmas. Taylor worries she doesn’t want Liam to see Kelly. Steffy says Hope wants them to be together, but she and Kelly will be staying there with her. Taylor, appalled, asks why she and Liam and Kelly won’t be celebrating as a family. She realizes that Hope made her choose and gasps that Steffy has to go to Eric’s for Christmas – she cries that she must pay the consequences for what happened with Bill, not Steffy. She knows that if Steffy could have one wish it would be to have her family back; it’s the way things are meant to be.

Maya visits Hope and Liam in their cabin and breaks the news that she and Rick have split up. After, talk turns to naming Hope and Liam’s baby. The pair asks Maya if they could share her daughter’s name – they would like to name their daughter Elizabeth and call her Beth. Maya’s touched they’d ask and replies that it’s fine – the girls will share a special bond. Liam marvels that it’s decided. After Maya leaves, Hope waits for a call from Rick; 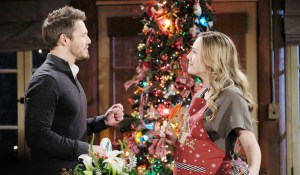 she’s sad about him and Maya. Hope feels sentimental and wants to avoid conflict for Liam’s first Christmas with Kelly. She can’t recall anyone ever arguing on the holiday at Eric’s. Liam says it’s the magic of Christmas and kisses her. Hope reiterates she wouldn’t do anything to keep him and Kelly apart on the holidays, but she has concerns about Taylor. “Steffy needs to tell her she can’t spend Christmas with us,” she states. Later, Liam looks at a Baby’s First Christmas ornament and stares out the window at the full moon.

At the cliff house, Steffy also stares out the window at the full moon.

Julius Reacts to Maya's News With...