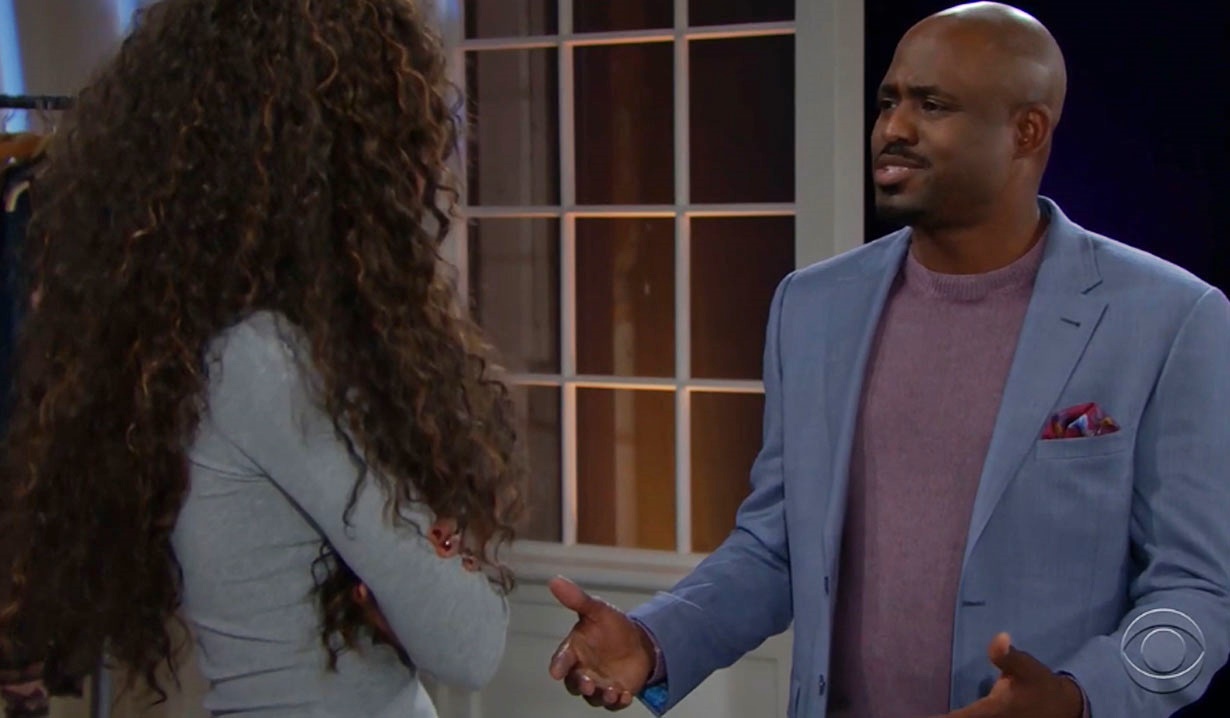 At the cliff house, Steffy finishes decorating the Christmas tree and Taylor asks where she’d like the mistletoe as she flashes to Reese kissing her. 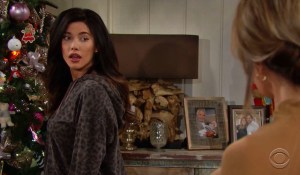 When Taylor learns Hope’s changed her mind about celebrating Christmas as one big family, she realizes it was because of her and worries about her presence in Los Angeles. Steffy needs her mother, and if Hope won’t allow her daughter to bond with Kelly, she’ll adopt a child herself to give her a sister. Taylor marvels at this revelation. Steffy laments that Hope took her family; she took Liam, and she doesn’t want her to take her too. Taylor decides she’ll stay, and heads out to see someone.

At Forrester Creations, Brooke listens as Hope tells Liam now that Taylor’s living with Steffy, she doesn’t see any way around separate holidays. Liam complains that means separate for him too. They debate about whether Taylor could be a danger and Brooke muses about vehicular manslaughter. 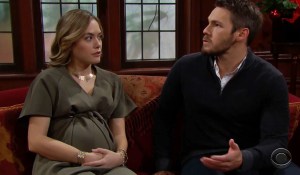 Hope reiterates that their daughter won’t be spending much time around Kelly under the circumstances. Liam frets. Brooke observes that he’s willing to take a hardline with his wife, but not his ex. Liam suggests she might be a little too involved in their marriage, then learns that Brooke has brought his father into this. Brooke doesn’t want Taylor behind bars; she merely believes Taylor shouldn’t be alone with Kelly. She feels Hope’s stance isn’t unreasonable and Liam just isn’t listening to her. Hope reminds him Taylor picked up a gun and shot someone, so Liam points out Ridge pushed his father off a balcony. Brooke gasps – that was an accident! Liam snarks it was an accident that took considerable force. He remains upset, and Hope decides she’s going to see the person who can do something about this.

In the Forrester Creations studio, Zoe tolerates a visit from her father. Reese mentions Steffy and Zoe informs him she’s not around today…and neither is her mother. Nearby, Tiffany interjects…she didn’t know Steffy’s mom worked there. Zoe clarifies she doesn’t. Reese jokingly asks Tiffany if she gives her father a hard time like Zoe. Tiffany declares she’s an angel, and walks off. Reese wonders to Zoe if Taylor’s left town. Zoe doesn’t know. She listens as Reese argues with a car salesman about his credit on the phone, and after he disconnects, questions if he’s overextended again. She worries about his interest in Taylor, and Reese shares that they kissed. Talk turns to Brooke having issues with Taylor. Zoe rolls her eyes – is her father going to be Taylor’s champion?

Taylor arrives at Forrester to see Brooke, who reveals she’s not afraid of her. Taylor didn’t think so. She complains about Brooke and Hope wanting Steffy to choose between her and her daughter. As they argue, Reese hears from outside the door. As Brooke reiterates she doesn’t want Taylor anywhere near her granddaughter and if it were up to her, she’d be barred from seeing her own, Reese barges in and exclaims, “Excuse me! How dare you talk to Dr. Hayes like that!”

Hope arrives at Steffy’s place and they agree they’re not happy with the way things were left. Steffy thinks Hope has changed her mind, but Hope suggests a compromise – that Taylor take a place in Santa Monica so their daughters can be close. She urges Steffy to put their daughters first.

Reese seeks an apology from Brooke.

Brooke Urges Bill to Intervene on...