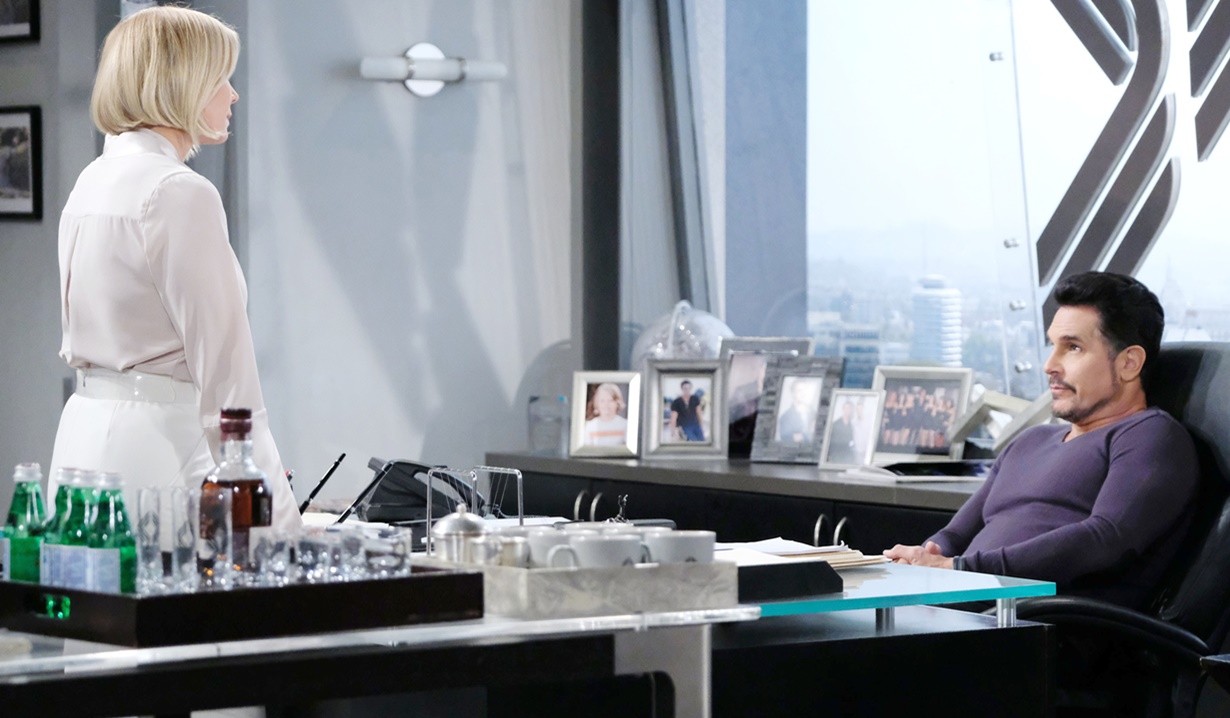 At Forrester Creations, Hope feels Liam has made it very clear he thinks she’s overreacting where Taylor’s concerned, and wants to know if he would rather be with Steffy and Kelly. Liam can’t believe she’s asking this. Steffy reminds her they wanted to be a big, happy family. Hope can’t buy into that anymore; not with Taylor in the picture. Liam knows Hope’s heart is in the right place, and he’s committed to their family, but he’s also committed to Kelly and will always have a bond with Steffy. Hope wants him to see that Taylor’s a threat. Liam feels they should be able to disagree about this without her thinking he secretly wants to be with his other family. Hope reiterates that if Taylor’s a part of the picture, the babies can’t be close, and they can’t be one big happy family.

In the Forrester Creations studio, Emma tells Xander that the intimates line models will be interviewed for an upcoming feature in Eye on Fashion. Xander’s excited. Zoe walks up, 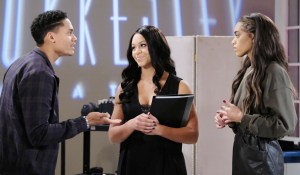 hears the news, and lets Emma know that she and Xander are seeing each another again. Emma complains that Zoe always wanted Xander for herself, but concedes she was over her head emotionally. She reports she’s in a great place in her life and hopes to one day, when she’s ready, find another guy as great as Xander. She warns Zoe to appreciate him properly. Later, Xander emerges in boxer briefs and Zoe assures him he’s rocking it as a model. Xander notes she’s been there for him. She’s glad he’s back in her life, especially now that she has to deal with her father. Xander has her back.

At Spencer Publications, Brooke urges Bill to act now before Taylor becomes a permanent fixture in his granddaughter’s life. Bill warns that would mean putting her behind bars – is Brooke sure she wants to go that far? Brooke doesn’t know how Taylor would survive in jail, but doesn’t want her living with Steffy and Kelly. She urges Bill to talk to Liam and Steffy – he needs to get through to them before it’s too late! Bill’s moved that she’s concerned about his granddaughter. Brooke just feels they’re sitting on a time bomb. Bill will think about what she’s said. He’s about to walk her out when she notices a property document. Bill reveals he won’t be building Sky, but will put the property to better use, for a charitable cause. He’s made changes to be a better man…for her. 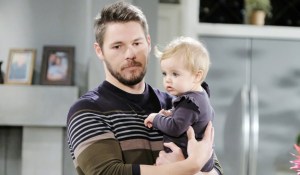 At home, Steffy says goodbye to Amelia as Liam tells Kelly bad jokes. Steffy grins that Kelly’s a daddy’s girl. After Liam puts the baby down, he tells Steffy she’s an excellent mother. She returns the compliment. They rehash the issue with Hope and reflect on her asking him if he wanted to be with Steffy. Liam assures Steffy he won’t spend less time with Kelly after Hope gives birth. He promises her dreams for Kelly will come true.

In Hope’s cabin, Brooke updates her on her visit to Bill. Hope reports that Liam is siding with Steffy, and she can’t go along with Taylor being in their lives.

Liam mentions Brooke’s past while trying to make a point.

Hope Demands Liam Choose Between Her...