Wyatt and Sally Express Their Love for the First Time

Friday December 14, 2018: Hope and Liam get news from Steffy, Brooke finds Taylor alone with Kelly, and Sally has a new idea. 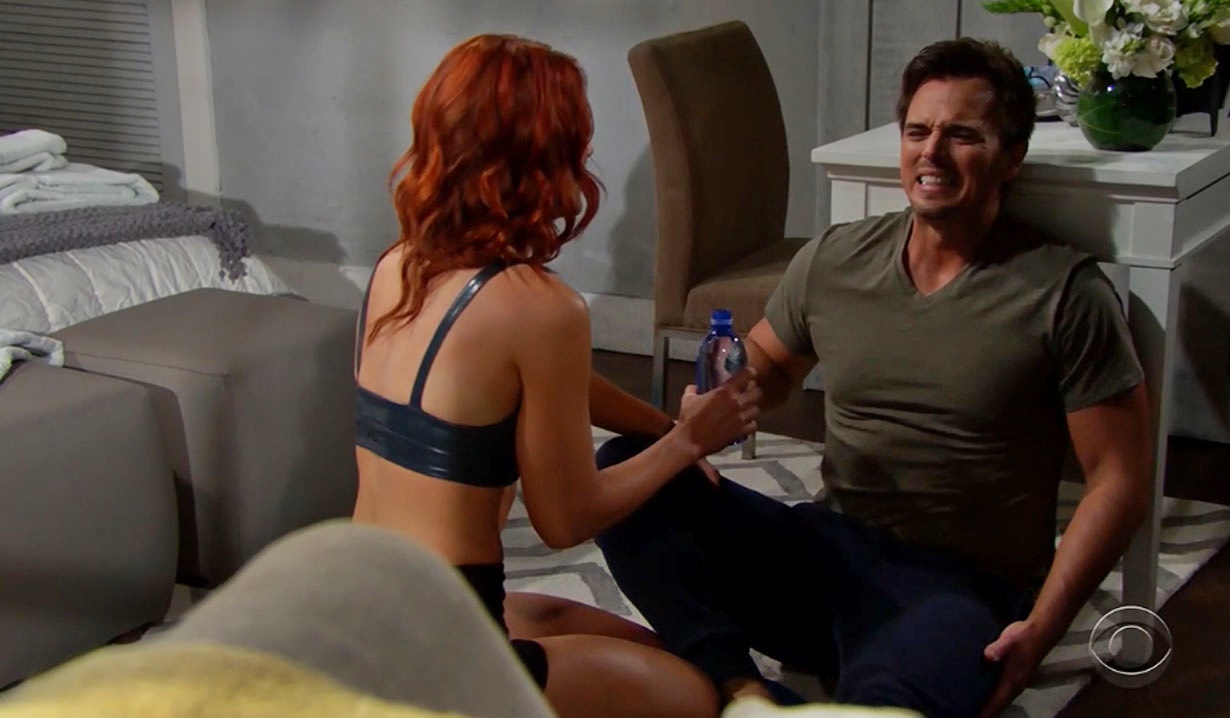 At the cliff house, Steffy and Taylor share a close moment – they’d do anything for one another. Taylor worries her presence will cause problems with Steffy and Liam, but her daughter reassures her – she’s not a threat to anyone. Taylor argues that Brooke’s launched a smear campaign. Steffy maintains that Brooke’s opinions don’t matter; they never did. She makes her mother a tea, and Taylor thanks her. Steffy tells her she’s proud to be her daughter. Taylor reflects on her children and admits that Steffy’s success sometimes makes her miss Phoebe even more…wonder what she’d be doing. Steffy feels she’d be right there supporting her too. 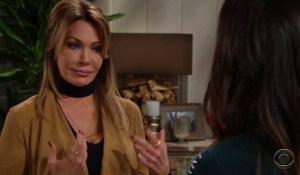 She confides that early in her pregnancy she thought she was having twins, and was a little upset to discover she was only carrying one – she wanted her daughter to have what she did growing up. Steffy then muses that Kelly will have a sister, and she wants them to be close. Taylor admires that Steffy’s not jealous of Hope’s baby. She hopes she and Brooke can find a way to learn from them. Steffy asks Taylor to watch Kelly while she goes to see Hope and Brooke herself – she and Hope want to be on the same page, not only for their daughters, but their mothers too.

At Forrester Creations, Liam debates with Hope and Brooke about how dangerous Taylor may be. Hope asks him, “Is this really someone you want in your daughter’s life?” 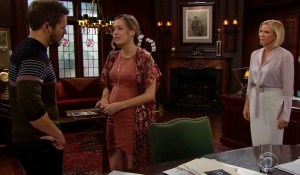 She vows their daughter will never be alone with Taylor – not for one moment. Hope doesn’t understand how they can be one big family with Taylor involved. Liam asks how Brooke would feel to be told she couldn’t see her grandchild. Brooke gapes – if she was shooting people in the back, she’d expect it! Brooke decides she needs to go see Steffy. Liam is fretting to Hope when Steffy arrives and announces she asked her mother to move in. She chatters about doing the multi-generational thing and having a live-in sitter. Hope gasps, “She’s home alone with Kelly right now?” Steffy says it’s not her business. Hope counters that it’s Liam’s business and asks how he feels.

Brooke arrives at the cliff house looking for Steffy, but Taylor says she’s at the office. Brooke learns the nanny isn’t there either. Taylor states she’s taking care of her granddaughter and warns Brooke had better not have anything to say about it. Taylor puts Kelly to bed and finds Brooke waiting. Taylor informs Brooke she wouldn’t hurt Kelly; she’d die for her. Brooke argues she’d put a bullet in someone to protect her – it’s a problem. She suggests it would be better if Taylor left town since Hope and Liam aren’t comfortable around her. Taylor shares that Steffy talked her out of leaving and insisted she move in – she’s not going anywhere, and will be taking care of her granddaughter…alone. Brooke glares.

In the beach house, Sally instructs Wyatt in yoga poses as he protests it’s not humanly possible. She giggles when he pulls something and can’t move – it turns out he exaggerated about his experience with yoga. They get back to it, and later, Wyatt jokes he got hot and bothered watching his instructor. They kiss and discuss her idea for an activewear line. He thinks Steffy and Ridge will be excited, and she should be proud. Sally reflects on being a cog in the wheel, which is intimidating, and they discuss her loss of Spectra. Sally’s happy she now has him. They kiss, and fall onto the bed. After sex, Wyatt rambles that he’s tried to show her, but hasn’t actually said ‘it’ to her. Sally surmises he’s talking about the ‘three little words’ and doesn’t really need to hear it. He blurts, “I love you.” Sally does like hearing it, and tells him she loves him too.

Liam tries to referee an argument between Hope and Steffy.

Hope Demands Liam Choose Between Her...