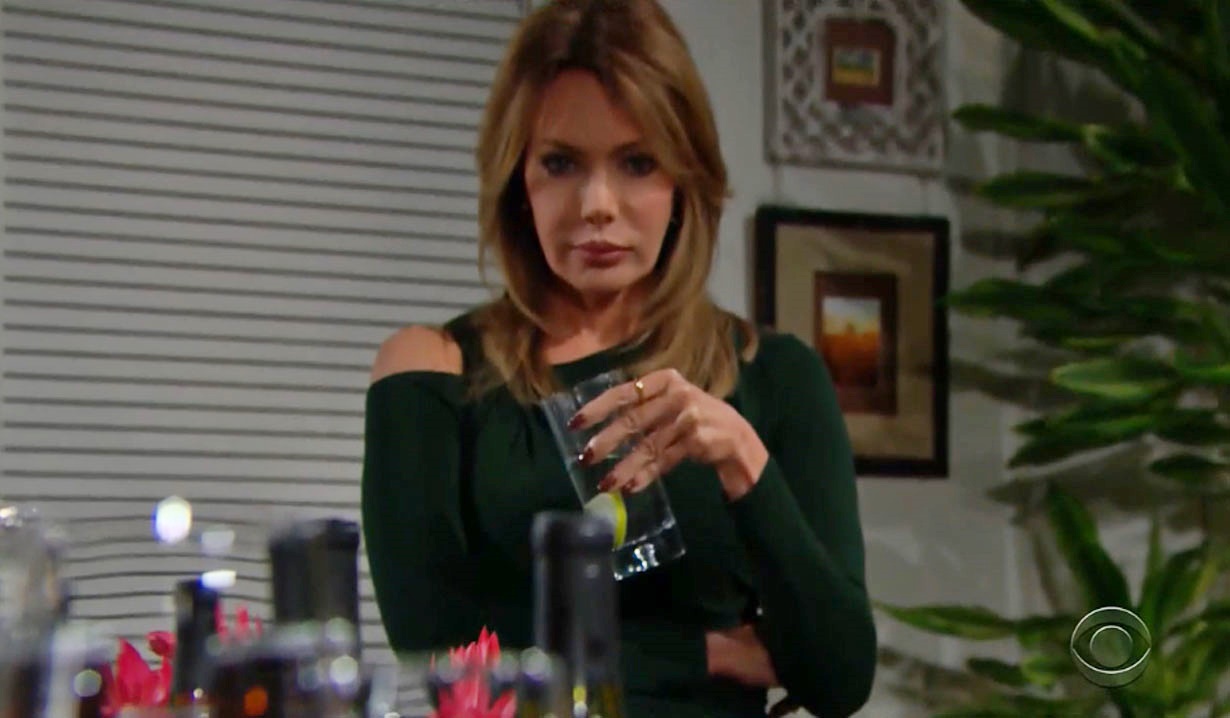 At Steffy’s party, Sally and Wyatt canoodle until Steffy gives a toast to her crew. Standing aside, Taylor, eyeing everyone’s wine, and Reese watch. Reese chats with Zoe, and asks about her looking cozy with Xander. Zoe muses she could say the same thing about him and Dr. Hayes, who is very attractive. Meanwhile, Steffy checks in with Taylor, who insists she’s fine and urges her daughter 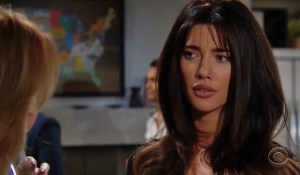 to go enjoy her party. Later, the party breaks up and Reese thanks Steffy, then tells Taylor it’s been a pleasure. She apologizes if she went on and on. Reese just wants to see her get her practice back and says, “Until we meet again.” After, Taylor stands looking at a glass of wine. Steffy decides to text Ridge to come over.

At home, Ridge admits to Brooke that he’s still protective of Taylor. The shooting was a one-time thing and she’s remorseful – they need to let it go. He wants peace for the family. 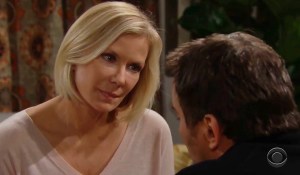 Brooke does too, but she can’t help but think about Kelly. Ridge thinks it’s ridiculous that Taylor would do anything to the child. Brooke argues Taylor could snap, and if she does, you wouldn’t want her anywhere near Kelly. Brooke muses Taylor’s had issues with alcohol…they both have, so she understands. She worries Taylor will reach for a drink or even take it further. Ridge gets a text from Steffy, and leaves.

At Forrester Creations, Hope and Liam can’t wait to spoil their baby when she’s born. Talk turns to Taylor. Hope feels she had no choice but to tell her mother, and asks if Liam agrees 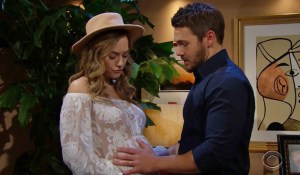 they all have reason to be concerned. She points out that if Bill had died, Taylor would have committed murder. Liam counters that she knows what she did was wrong, she’s getting professional help, and there are people to keep her in check. Hope argues that she’s still fragile as they saw, and if she snaps again, who knows what could happen. Liam feels they should keep things in perspective, but Hope remains concerned, and suggests that Taylor shouldn’t be alone with Kelly. Liam can’t imagine Taylor harming any baby, especially Kelly. Hope doesn’t want to imagine it either. Later, in the design office, Reese thanks Zoe for a delightful evening, and the conversation turns to Steffy and Taylor before Reese asks what his daughter knows about Brooke Logan. Zoe shows him a photo of her.

At Brooke’s house, Hope updates her mother that she and Liam have been concerned about Taylor. Brooke complains Ridge is defending her, and Hope thinks maybe he feels partly responsible since he told her about Steffy and Bill. Brooke worries she could be dangerous. She reveals she told Taylor she wouldn’t turn her in, but would watch her behavior.

Ridge arrives at the cliff house, where Steffy informs Taylor she saw her looking at the wine and lets her know they’re there for her. Taylor cries that she should have fought harder to keep their family together. She frets that she may be to blame for all the problems and that Brooke’s right that she shouldn’t be around Kelly. The baby awakens. Ridge assures Taylor she’ll make it through this and compliments the kind of woman she is, as Steffy brings her Kelly.

Liam and Steffy debate about Taylor.