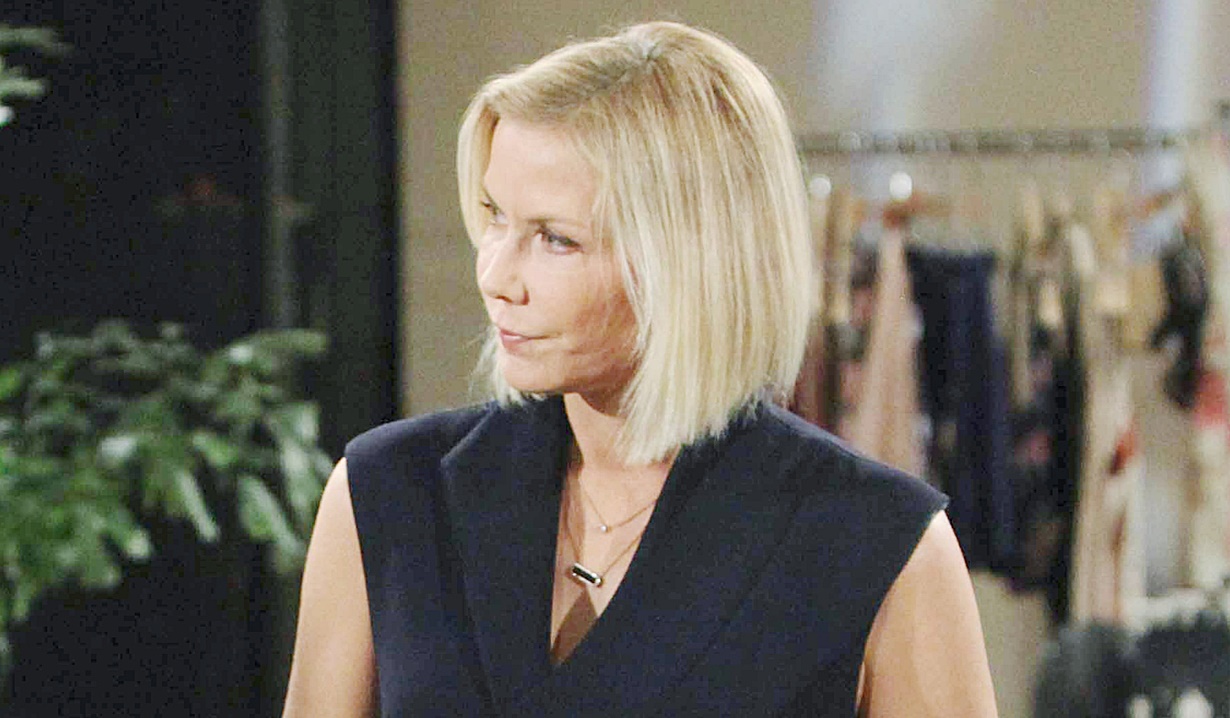 At Forrester Creations, Steffy advises Ridge to sit down, then informs him that something happened between her mom and Bill. She cries, “Mom shot Bill.” Ridge is stunned. In the design office, Eric touches the gown Donna’s modeling and muses this was a good idea that Pam had. Outside the door, Pam stops Quinn from entering the design office by asking her to look at pictures of chairs for her bad back. Inside, Eric continues to adjust the dress, 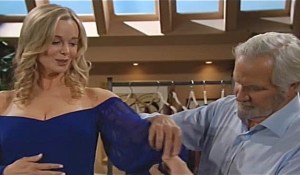 and tells a beaming Donna she’s a natural. In reception, Pam keeps up her stalling tactics until Quinn finally clues in that she’s trying to stop her from seeing Eric. She hollers at Pam to get out of her way. Pam offers a lemon bar. Quinn says she hates them, and insists she move. She enters the design office, where Eric and Donna are reminiscing, and would like to know what’s going on there. Pam joins them as Eric voices opinions on the gown. Quinn wants to know why Donna’s wearing it. Eric explains – they were lucky Donna agreed to do it.

At Steffy’s house, Taylor promises Brooke she won’t snap ever again, and pleads, “Just don’t say a word to anyone.” Brooke isn’t sure she can believe her and wonders about her being alone with Kelly. Taylor exclaims, and Brooke notes her reaction, before deciding for Steffy and Ridge’s sake she won’t turn her nemesis in to the authorities…but she will keep a close eye on her. Later, Ridge and Steffy arrive. Taylor quickly realizes that her daughter told Ridge she shot Bill. Taylor tearfully apologizes for putting everyone in a terrible position – she didn’t go over to Bill’s to do that. Ridge knows. Taylor insists he violated their daughter. Ridge agrees. Steffy interrupts to set them straight. Ridge reiterates that Bill is despicable and Taylor was defending Steffy. 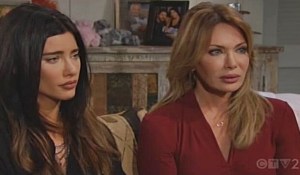 Taylor admits that Bill is the only reason she’s not in jail right now. She reveals that Brooke knows and was over to give her a piece of her mind. Steffy’s surprised she agreed not to turn Taylor in. Taylor sniffs that she suggested it was bad for her to be around Kelly. Steffy deems that ridiculous. Ridge insists Brooke’s not heartless. He vows he won’t let anything happen to Taylor, nor allow her to be separated from her daughter or granddaughter.

In Bill’s office, he confirms to Justin that he doesn’t feel the same way about Sky as he used to. Justin muses he’s going soft, but Bill takes exception to that – he’s trying to better himself, for his family. Justin observes, “For your family, and for Brooke.” He wonders why she’s with Ridge. Bill says he’s working on that. He’s talking about spirituality when Brooke arrives. Justin exits. 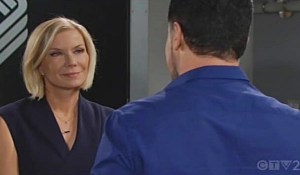 Brooke tells Bill she’s been thinking about all he’s been through this year…he’s genuinely become a better person. Once she reveals she knows Taylor shot him, they discuss being surprised she was capable of such a thing. Bill reflects that Taylor going to jail would have devastated Steffy…he’s not that guy anymore. He knows Brooke is still married to Ridge, but he’s committed to being a man that’s worthy of her. Brooke is proud of him, and notes she told Taylor she won’t go to the authorities, but will watch her…she thinks he should too – she’s concerned about his granddaughter. Bill muses Liam had the same worry, but he doesn’t think Taylor would hurt her. Brooke feels anything could happen and urges Bill to protect Kelly.

B&B is Pre-empted for Coverage of...