Quinn Threatens to Crack Pam’s Head Open Like an Egg

Monday November 19, 2018: Bill apologizes to Liam and Wyatt, Brooke assures Ridge he won't lose her, and Pam has a message for Eric. 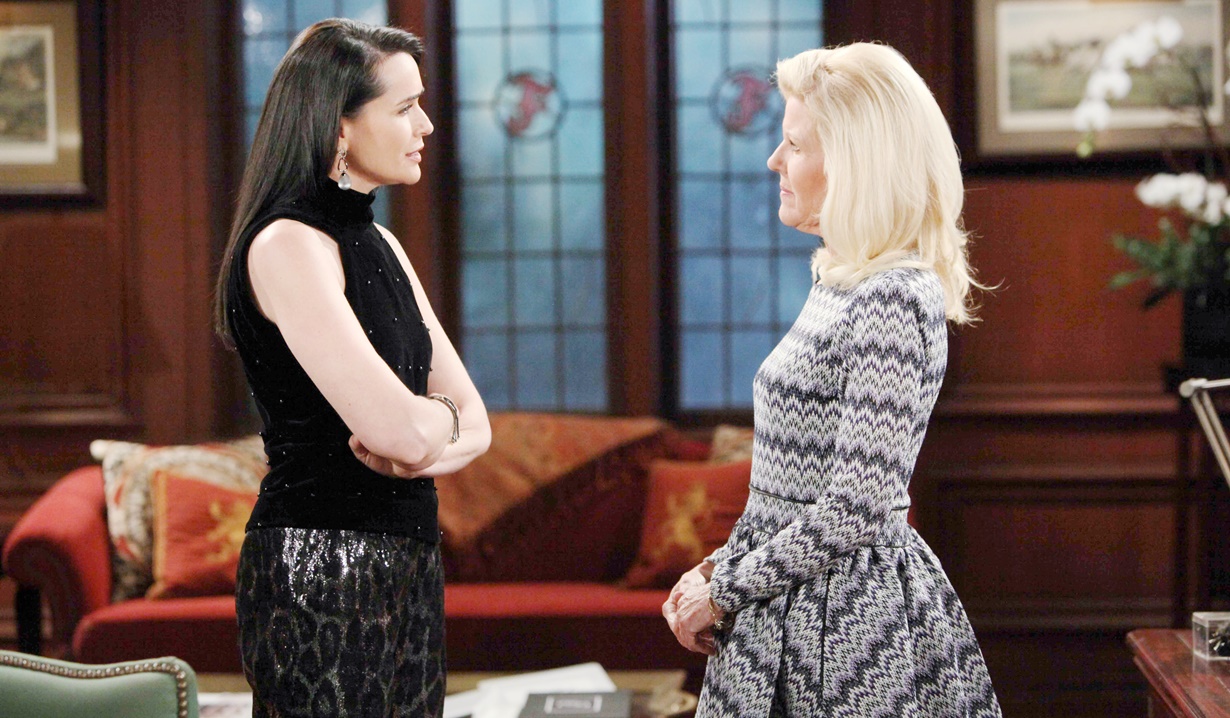 At home, Brooke finds Ridge in the bedroom stewing. She confirms she was with Bill since he left, and maintains it was right to hear what he had to say. Ridge guesses Bill told her he was a new, improved person and she is the reason. He muses that his nemesis is trying something new; a grand unselfish gesture. Ridge intones, “He wants you back.” Brooke concedes they have a history, and it’s not a crime for Bill to feel something for her. She only feels gratitude for Bill not putting Ridge behind bars, and believes he should be thankful as well. Ridge insists he didn’t bribe or threaten the judge. Brooke gives a rueful laugh – he leaned on him. She muses that good people sometimes do terrible things. Ridge asks, “Are we?” when Brooke declares they’re solid. She admits she’s afraid of where his anger toward Bill will take him next. Ridge’s afraid of losing her. Brooke reassures him; she just needs him to love her. They kiss.

At Spencer Publications, Justin’s perplexed at Bill becoming a ‘turn the other cheek’ kind of guy. Wyatt and Liam appear – they were wondering about that too. Bill admits he’d like to put Brooke’s husband away, but he didn’t want to do that to her – she can hold him accountable if she wants to. 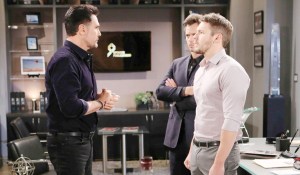 Justin exits, ranting, and Wyatt wonders if he should be on blood pressure medication. Liam thinks Bill is playing a long game to get Brooke back, and imagines Ridge sees it too. Bill reveals he’ll consider funding Liam’s recommendations for the Spectra Tower before admitting he wants Brooke to see he’s a better man. Bill feels shame for the things he’s done to them and particularly regrets his violence toward Liam. He’ll keep apologizing until he’s the kind of father they can honor. Liam notes he couldn’t have hurt him so much if he didn’t love him.

In the office at Forrester Creations, Quinn and Eric discuss the guest list for Thanksgiving. She suggests perhaps Pam and Charlie need a break from cooking, but Eric adds them. Pam enters; she wants to speak to Eric alone. Eric’s dismayed to hear she and Charlie have decided to spend the holiday 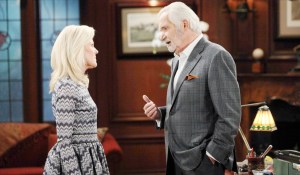 alone and shows Pam they’re on the list. Pam tells Eric that Stephanie’s trying to communicate to her that Donna’s back for him – she sees that Donna really did love Eric. The Forrester patriarch has doubts. Pam relays she has a feeling dark times are on the horizon…because of Quinn. Eric gruffly asks Pam for respect – he’s married to Quinn and happy with her. He exits, and Quinn emerges. She tells Pam she should be ashamed of herself and warns that Stephanie is dead and can’t protect her. Quinn advises if Pam keeps trying to turn Eric against her she’ll crack her crazy head like an egg. She knows what Pam is angling to do and insists there’s nothing she can do to interfere with her marriage.

Ridge Declares Bill's Coming for His...