Thursday November, 14 2018: Brooke appeals to Bill when he threatens Ridge and McMullen, while Eric reassures Quinn about Donna, who returns to work at Forrester. 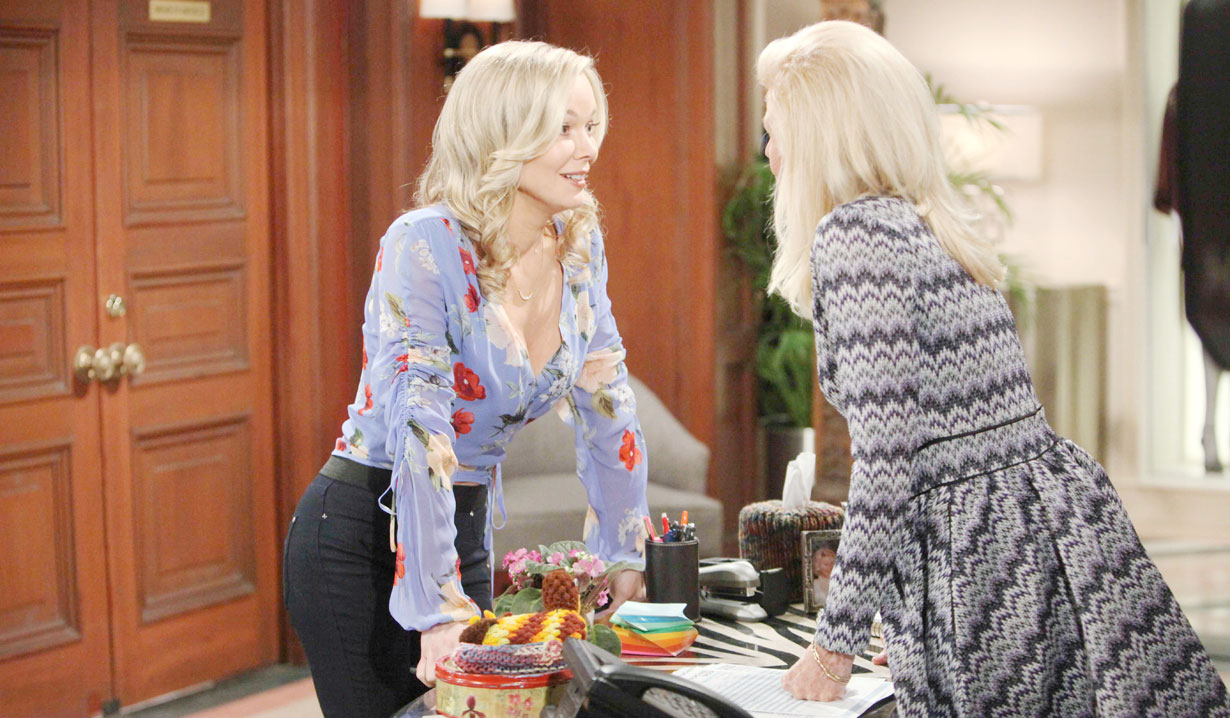 Bill and Justin play the recording in his office for McMullen, Ridge, Thorne, Katie and Brooke. Ridge and Thorne remain resolute that McMullen’s ruling regarding Will was justified. Ridge and McMullen add that Bill’s recording is illegal. Unfazed, Bill takes joy in needling them and then turns his attention to Katie, admonishing her for keeping Ridge and McMullan’s secret. Brooke pipes up that she is the one who told Katie. She declares 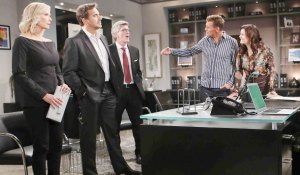 Katie knew Bill was being treated unfairly. Bill praises Brooke for being on his side. He says she is the one person in the room who defended him – the only one. More bickering ensues between Ridge and Bill until Ridge yells for Bill to do what he’s going to do – call the police or not, just stop wasting his time. Bill reiterates that he is a changed man, but he now has a decision to make. Brooke doesn’t excuse what Ridge and the judge did, but begs Bill not to call the cops on them. She asks him to show the men and her that he’s changed.

At Pam’s desk at Forrester, Eric offers Donna the job as co-receptionist. Donna happily accepts saying she’d love to be back there with Pam… and with him. As Pam takes a call, Donna thanks Eric for giving her a place to contribute in her own small way. Eric returns to the design office where he fills in an exasperated Quinn about Donna’s job. He tells her there’s no reason to be upset, but she can’t understand why Donna would want the job. Eric thinks she just needs a place to go every day. He doesn’t see any harm in her reconnecting with the company and the family. Quinn snarks, “And her ex.” Eric reassures Quinn she has nothing to feel threatened by. Back at the desk, Pam and Donna rehash their own past and how Quinn ruined Pam’s wedding. They move on to Eric. Donna says her time with him was the best of her life. Pam wants her to have that again and urges her to let Eric know how she really feels. They settle in together behind the desk where Pam apologizes for all the horrible things she did to her. They laugh about the past and Donna admits she knows she was just protecting Stephanie, besides she had a medical issue. Donna knows Pam would never do anything like that again. Pam insists she wouldn’t, but jokes she might do it to Quinn. Donna laughs, but gives Pam a worried look.

Will spends time with his brothers.

Ridge & McMullen Are Summoned to...

Bill Comes to a Decision in Regards...