Tuesday November 13, 2018: Katie frets that she may lose her son, Pam wants Eric to hire Donna, and Justin anticipates Ridge being jailed. 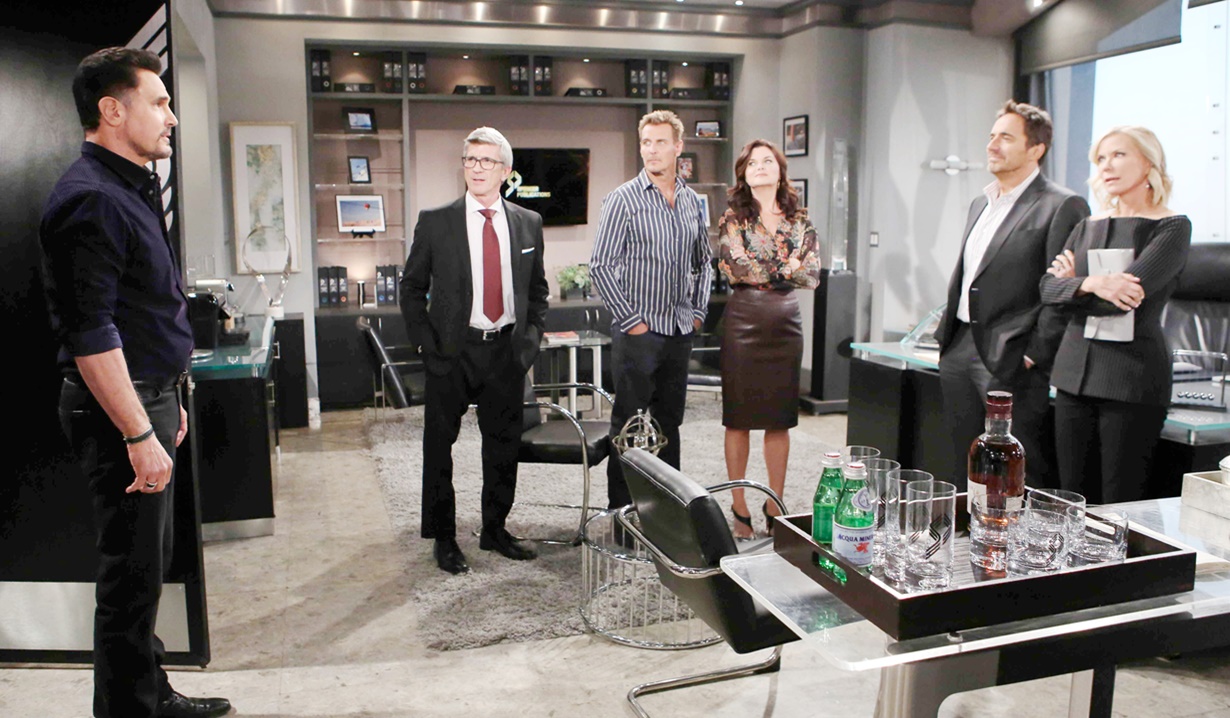 In the Forrester Creations parking lot, Ridge and Judge McMullen watch Bill peel out of the driveway. McMullen crabs that now Spencer knows what they did…because of Ridge. In the main office, Katie and Brooke fret about Bill being onto Ridge. Thorne enters and asks what’s going on. Brooke fills him in. Over in the design office, Eric wants to leave early and moves to make a dinner reservation, but Quinn sighs…she doesn’t think she will be done until later. Eric senses something’s wrong. Quinn admits she had another run-in with Pam. Eric is unimpressed and asks what it was about this time. Quinn rants about Pam not respecting her, it makes working together very difficult. Eric reminds her they worked together fine for years; he doesn’t want her personal issues with Pam causing trouble at Forrester. He urges his wife to treat Pam like family.

In Forrester Creations’ reception area, Pam’s frazzled as the phone rings off the hook for the lingerie line. Donna realizes the situation with Quinn is getting to her. As Pam becomes increasingly short with callers, Donna jumps in to help. Pam’s appreciative of the break, and Donna muses it’s fun, like old times. They recall how they hated each other once, but became a good team…now they’re almost friends. Eric appears, and Pam suggests that he hire Donna to work the reception desk with her. Pam rambles on that Eric must still care about Donna, who is a great fit in the family and the business, and concludes that hiring Donna could be a game-changer for all of them.

Meanwhile, Ridge and McMullen join Katie, Thorne, and Brooke in the office. Brooke panics – they can’t be seen together. Ridge intones that it’s too late – Bill knows. They speculate about whether he got any information, and Katie reminds them Bill’s no idiot. She rants at Ridge – what was he thinking interfering in the custody case? Ridge protests that it doesn’t matter now if Bill knows. Katie disagrees; it could change everything and she could lose her son! Ridge tries to reassure her, but McMullen overrules him – they’re in deep trouble. Katie insists Bill will use this to get what he wants. Thorne asks, “And what is that exactly?”

At Spencer Publications, Bill chuckles as Justin recaps that they now have proof that Ridge tampered with the judge in the custody hearing. They rewind the recording and listen. Justin observes that Ridge cost Bill his son and mulls over the charges he’ll be facing – Bill will be able to put him behind bars

where he belongs. Bill calls Ridge and tells him to come to his office and bring Brooke, Katie, and McMullen with him. After he disconnects, Justin intones that McMullen and Ridge are headed to the penitentiary, and when that happens, Brooke will finally be Bill’s. Later, Ridge, Brooke, Thorne, and McMullen enter Bill’s office and are told to wait. They all worry about what will happen. Finally, Justin appears, followed by Bill, who taunts that Ridge knows exactly what this is about…he and his friend, the Honorable Judge McMullen, who’s not so honorable after all. He confronts them about committing conspiracy. Ridge grunts he doesn’t have proof. Bill plays the recording and snarks, “Gotcha’.”

Donna and Pam look back at their history.