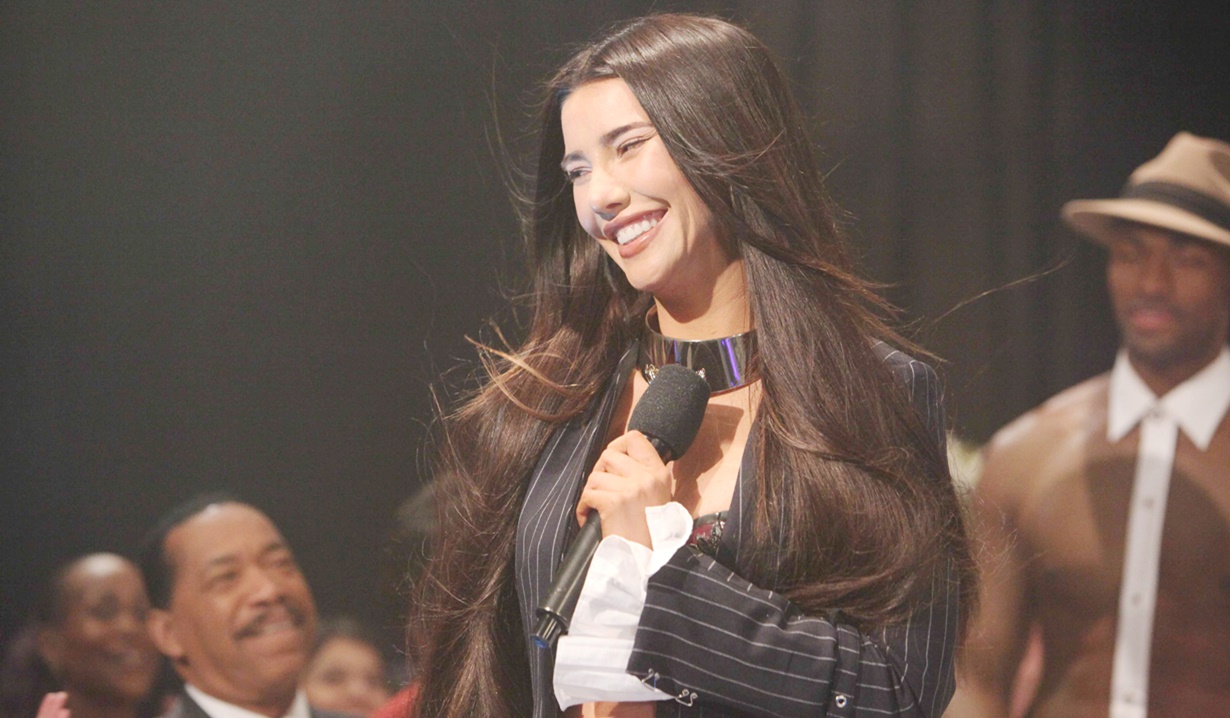 At Spencer Publications, Justin and Bill go over the circumstantial evidence against Ridge. Justin muses it’s something the old Dollar Bill would have done. Bill snarks that he would have gotten away with it…Ridge won’t. Bill wants Justin to track down Brooke; she’ll need a friend today, and he also wants to find out more about Ridge and Judge McMullen.

Behind the scenes at the Forrester Creations fashion show, Steffy gives an interview about running her line while being a single mom, and Julius and Vivienne are there supporting Xander on his first modeling gig. Julius sees Zoe and jokes to Xander, “Now I get it.” Vivienne clouts him. Meanwhile, Steffy asks Quinn if she’s seen her father. She hasn’t. Up in the office, Brooke warns Ridge that Bill is onto him, and on the verge of connecting him to Judge McMullen. Ridge tells Brooke to stay away from Spencer and everything will be fine. He has to go downstairs and assures Brooke everything will be fine.

Downstairs, Sally approaches Steffy and warns her Grams is there and hoping to come in. Steffy replies, “Done. It’s been cleared.” Steffy gives a pep talk and Shirley appears to squeeze Sally – she’s so gosh-darned proud! The Intimates fashion show gets underway, with Danny, and a blonde model walking the runway first. Backstage, Zoe jokes to Xander that if he’s nervous, just picture everyone in their underwear. She asks about Emma, and Xander relays she’s not coming. Zoe muses she does seem more of a Hope for the Future girl before taking her turn on the runway. Behind-the-scenes, Sally worries to Wyatt that her designs will bomb, but he assures her she’s killing it. They kiss. Nearby, Steffy finds Ridge and learns Brooke plans to spend the day with Hope.

She senses he’s off. Ridge has a lot on his mind, that’s all. On the runway, it’s Xander’s turn and Julius jumps up to clasps his nephew’s hand, enjoying every minute. Behind the curtain, Sally notes Zoe and Xander are getting closer. Zoe says there’s still a certain someone in the way. Sally models as Shirley, with Pam, applauds wildly. Ridge, watching, tells Steffy she’s amazing. They agree it’s a great day for the Forresters. After, Ridge is imagining Bill showing up with the police when Quinn calls that it’s time for the showstopper. Steffy models the sexy final design, then the rest join her as she thanks Sally and the models. Backstage, the thanks and celebration continue. Ridge thinks Steffy is an inspiration with her ‘I choose me’ example. After, Ridge texts Brooke to continue their talk.

At Il Giardino, Brooke tells Hope, by phone, to take care of herself and they’ll have lunch soon. Bill appears. Brooke sighs.

Bill remarks on it being the day for Steffy’s fashion show, another example of Ridge putting Brooke and her daughter second. He switches gears to judge tampering and asks Brooke, “Ridge made sure I lost my son, didn’t he?” He loves Brooke too much to put her in between him and Ridge, but feels her husband got to the judge. Bill needs his son back and pleads with her for the truth.

Brooke Warns Ridge That Bill's Onto...