Bill Pressures Brooke for the Truth About Ridge

Tuesday November 6, 2018: Donna stands up to Quinn, Ridge wants to work through his issues with Brooke, and Quinn disagrees with Eric. 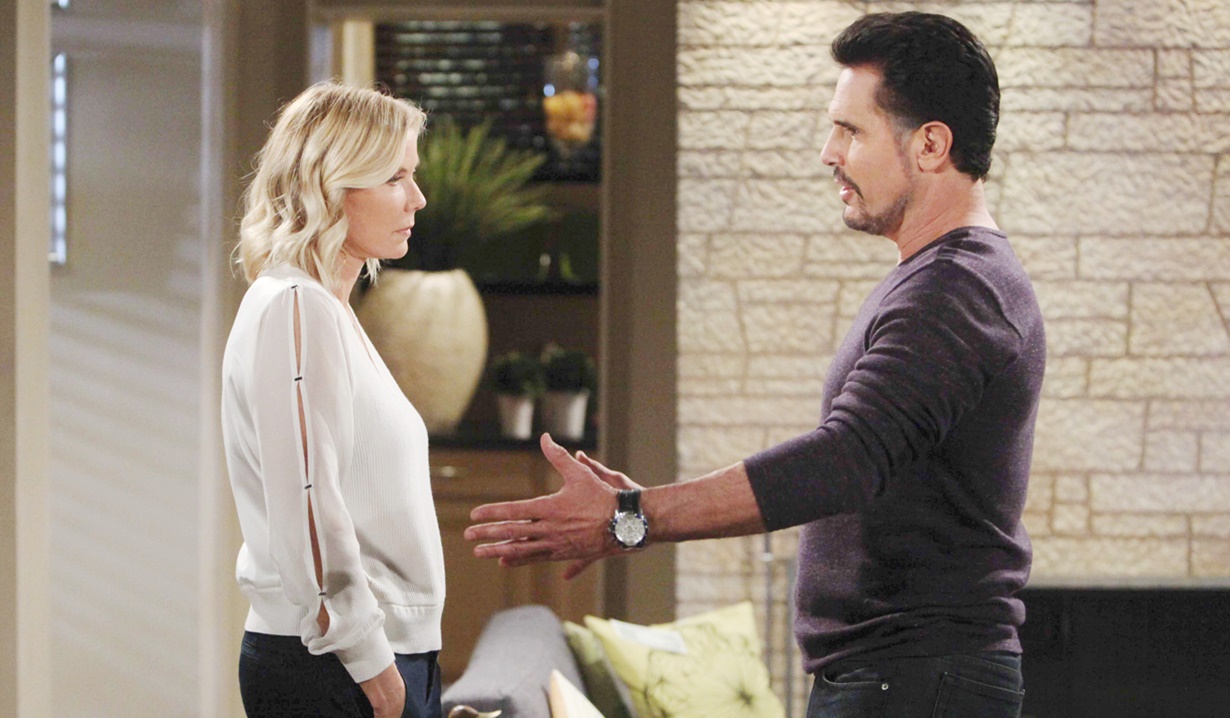 At Katie’s place, Bill presses Brooke to tell him if she knows anything about Ridge getting to Judge McMullen. Bill needs the truth…for himself, but for Will’s sake most of all. Brooke suddenly has to go. Outside, she exhales.

At Forrester mansion, Ridge discusses Brooke’s departure with Katie and Thorne. He grumps it’s about Spencer – it’s always about Spencer – she keeps defending him. Ridge exclaims, “Why can’t she just forget about McMullen and me?” In the kitchen, Quinn remarks she got back just in the nick of time, while Donna accuses her of eavesdropping. Quinn can’t understand what Eric ever saw in her, and Donna wonders if Quinn treats all of her dinner guests like this.

She taunts Quinn about whether she and Eric are actually happily married. The brunette counters that clearly all the honey in the world couldn’t save her marriage to Eric, and warns she won’t let anyone intrude on the life she’s made with her husband. In the living room, Brooke returns and finds Katie alone. She tells her Bill is with Will, but not to say anything. Katie asks Brooke if she’s okay, and Brooke reassures her, as Ridge and Thorne reappear from the den. Donna rejoins the group and asks if it’s true that Quinn’s still a little off the wall. She won’t disclose the reason she’s asking, so she, Thorne, and Katie leave. Ridge promises Brooke they’ll work things out. She doesn’t want anything to come between them either. Later, Eric tells Quinn he’s glad Donna’s back and suggests they may become friends. Quinn disagrees; she’ll never know what he saw in her. Quinn promises she’ll always put Eric first. They kiss.

Bill’s cleaning up cash when Katie, Donna, and Thorne arrive at home. Bill greets Donna and says she looks beautiful as always. Thorne asks why he’s there. Bill relays he sent the babysitter home. Thorne isn’t happy, but Katie says Brooke told her. Donna’s impressed with Bill getting Will to bed on time…if it’s true. Bill muses about the truth, and notes he’ll always wonder what made the judge rule against him. Later, Donna updates Thorne and Katie on her run-in with Quinn – she hates that someone like that is in Eric’s life. Thorne thinks it sounds like she still cares. Donna will always care about Eric. Talk turns to Ridge and Brooke. Donna hopes they’ll be okay. Katie muses that Brooke was alone with Bill, and that secrets have a way of coming out when you least expect them.

At home, Bill texts Justin, who has no news, but is still on it. Bill relays that he senses Brooke knows something.

Ridge joins Brooke in their bedroom

– she’s been quiet. They start bickering about Bill. Brooke warns there are things they may not have control over. They rehash him coercing the judge. Ridge heads to the shower, and Brooke takes a call from Bill, who pleads if she knows anything about Ridge and the judge to please tell him. Brooke says she’s sorry and disconnects.

Brooke Warns Ridge That Bill's Onto...