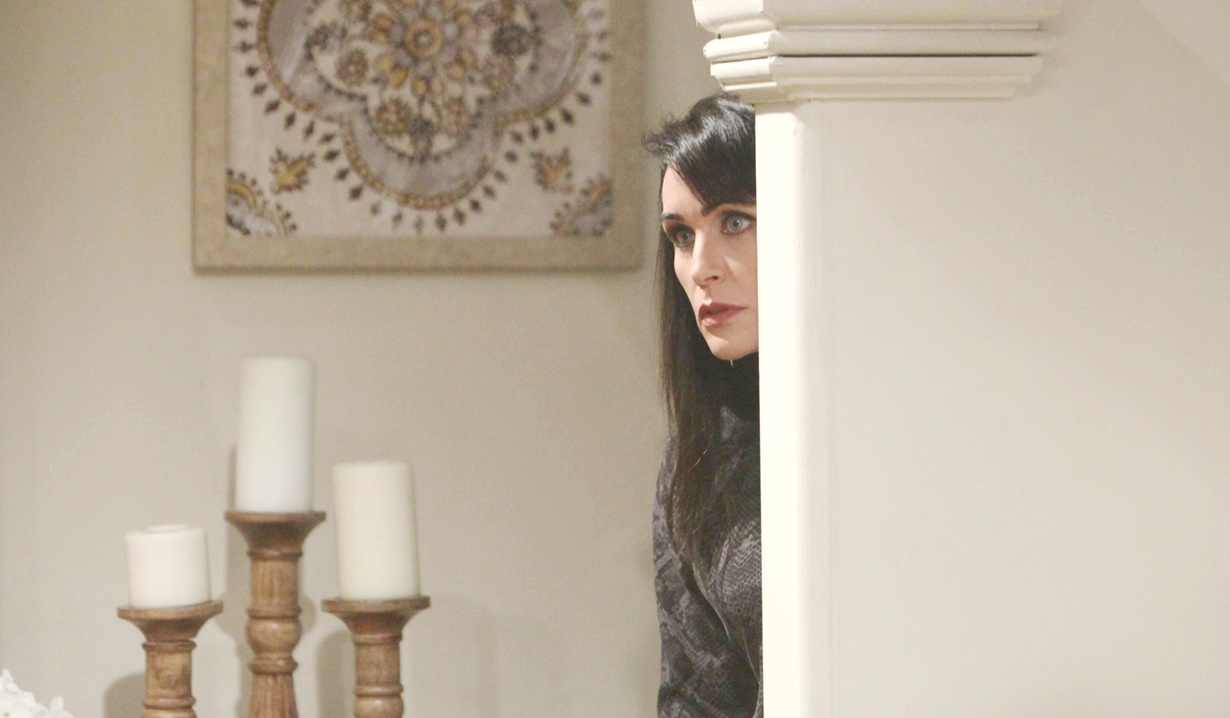 At Spencer Publications, Bill’s impatient with Justin, who doesn’t have more information regarding Judge McMullen yet. Bill announces he’s going to go see Will, but Justin questions him making unscheduled visits. Justin wonders why Bill didn’t throw Ridge in jail when he had the chance. Bill notes that’s the old Dollar Bill, but warns things will change if he finds out Ridge messed with the custody suit.

At Forrester Creations, Quinn complains to Wyatt about not feeling welcome in her own home thanks to Pam and the Logan sisters.

Wyatt warns her not to get so worked up about things, including Pam. Quinn rants that it’s hard not to when she barges into her house and compares her to Stephanie – it’s twigs her insecurities. Wyatt cautions her not to mess things up with her husband…Pam just wants a wedding. Quinn decides he’s right; she should be at home acting as hostess and matriarch.

At the Forrester mansion, Katie answers her family’s questions about taking a belated honeymoon and taking Will with them. She would have to get Bill’s permission to take him out of the country. Ridge snaps that she has full custody. Brooke steps in when she and alludes to Bill’s position not being entirely his fault. Ridge asks her to come into the kitchen and grouches about her defending Bill. Brooke snarls that he and Thorne are rejoicing about him losing his son. She adds that Ridge dug Bill’s grave, she just doesn’t want to see him dance on it. They rehash that Bill could have pressed charges, and Brooke asks who he’s becoming, acting like a bully in a schoolyard. Ridge reminds her she kissed Bill, and Brooke counters the talk of Australia made her recall his dalliance with Quinn. Ridge maintains that Bill got what he deserved, and he’d do it again. Miffed, Brooke informs Katie she has a headache and is heading to her house to spend time with Will. Later, Donna and Eric worry about Brooke before reflecting that their marriage was the best time in their lives.

Quinn arrives in time to hear Donna tell her ex-husband, “I miss you, Honey Bear.” She finds the honey in the same cupboard, and Eric admits he thinks of her when he uses it. When Eric steps out to take a call, Quinn narrows her eyes and joins Donna to confront her. She informs her the honey bear is past its expiration date. Donna notes honey doesn’t spoil. Quinn informs her she and Eric have a good marriage – her sisters may have their Forrester men, but Donna won’t, and if she tries to get her hooks into Eric, she’ll destroy her. In the living room, Ridge tells Katie and Thorne he doesn’t like arguing with Brooke, but he can’t have her defending Spencer.

Bill arrives at Katie’s place, pays the babysitter and lets her leave. Will appears, and Bill asks how he feels about hanging out. Will quips that he’d feel like a million bucks. Bill’s tickled and embraces his son.

As they’re playing with a cash machine, Bill gets a text and looks tense. He puts Will to bed and calls Justin, who says his contact identified Ridge as the man who was visiting McMullen. Brooke arrives, and Bill disconnects. He senses she’s upset, and as they talk, he reveals that according to Justin, Ridge was seen with Judge McMullen on more than one occasion. He asks Brooke if she knows what happened, and asks her to tell him now.

Donna squares off with Quinn.

Quinn Causes Pam to End Her...

Bill Pressures Brooke for the Truth...