Eric’s Surprised by Donna in Lingerie

Monday October 29, 2018: Bill asks Brooke to come back to him, Eric refuses Quinn's request, and Donna returns to Los Angeles. 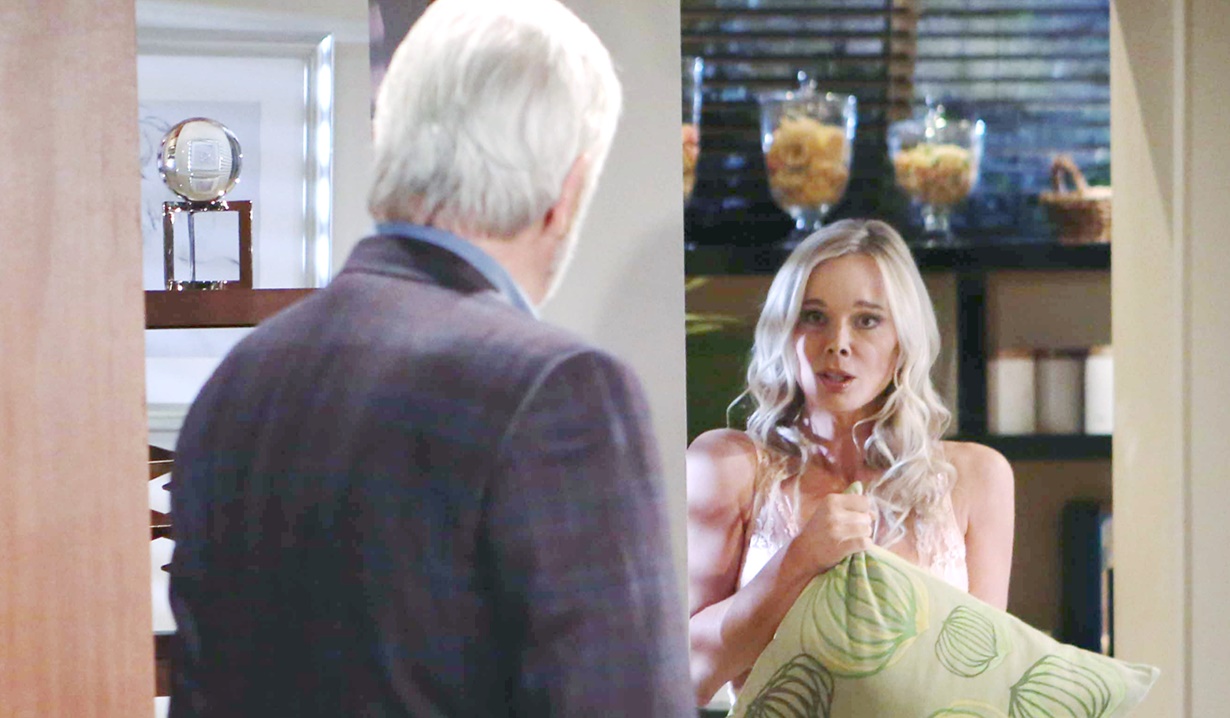 At the hospital, Brooke tells Bill, ‘Welcome back,” and when she asks if he knows his name, he replies, “Stallion.” Brooke laughs. Bill identifies a $100 bill by smell before she goes to get the doctor. In the corridor, she announces Bill’s awake. Ridge and Thorne confer…they’ve concerns about what Bill will say. In the hospital room, the doctor examines Bill and declares he’s a very lucky man. Bill looks at Brooke and agrees, “I am.” After, Liam and Wyatt advise Bill he gave them a scare, while Katie is pleased she doesn’t have to give Will any bad news. Meanwhile, Ridge insists to Brooke he didn’t want Bill to die, and notes she brought him back. The doctor appears – Bill’s asking for her again. Ridge sighs as she enters Bill’s room. The patient gives Brooke her $100 bill back before turning serious – he sees clearly what matters now, and stuns Brooke by asking her to remove his sword necklace and throw it away. He doesn’t want to be the same man that drove her away anymore. Brooke removes it. Bill makes a speech about throwing away her love. He wants to be the man she needed him to be. Bill notes he won’t press charges against Ridge and Thorne – he’ll choose forgiveness. He hopes she’ll do the same for what he did to them. Bill feels they’re each other’s greatest loves, and he asks for one more chance. He makes a weak stallion noise and Brooke sniffs for him to take it easy. Bill appeals to Brooke to come back to him.

At the Forrester estate, Eric argues with Quinn about Pam wanting to have her wedding in Stephanie’s former home. He can’t believe she told Charlie not to marry Pam – it was just cruel, and he’s not used to seeing it come out of her…not anymore. Quinn feels she doesn’t matter since a wedding will take place in her home without her consent. Talk turns to Pam wanting to take her portrait down – it’s telling her she doesn’t exist! Quinn can’t understand why it doesn’t hurt him too. She wants Eric to respect her by telling Pam she can’t get married there. Eric just wanted to relax, but instead came home to chaos. He asserts they will host the wedding and he won’t budge. Eric announces he’s going to see Thorne before they both say things they’ll regret.

At Katie’s house, Donna lets herself in and calls out. She presumes they’re still at the hospital when there’s no answer. Donna sends a text, then muses, “It’s good to be back.” She finds Katie’s left her a welcome back gift from the intimates line she might like, and so might some lucky man. Donna flashes to sexy times with Eric. She tries on the lingerie, and panicking, holds up a pillow as someone enters. It’s Eric. Donna lets the pillow fall away and smiles. “Hello, Honeybear.”

Bill Wakes up After Brooke’s...