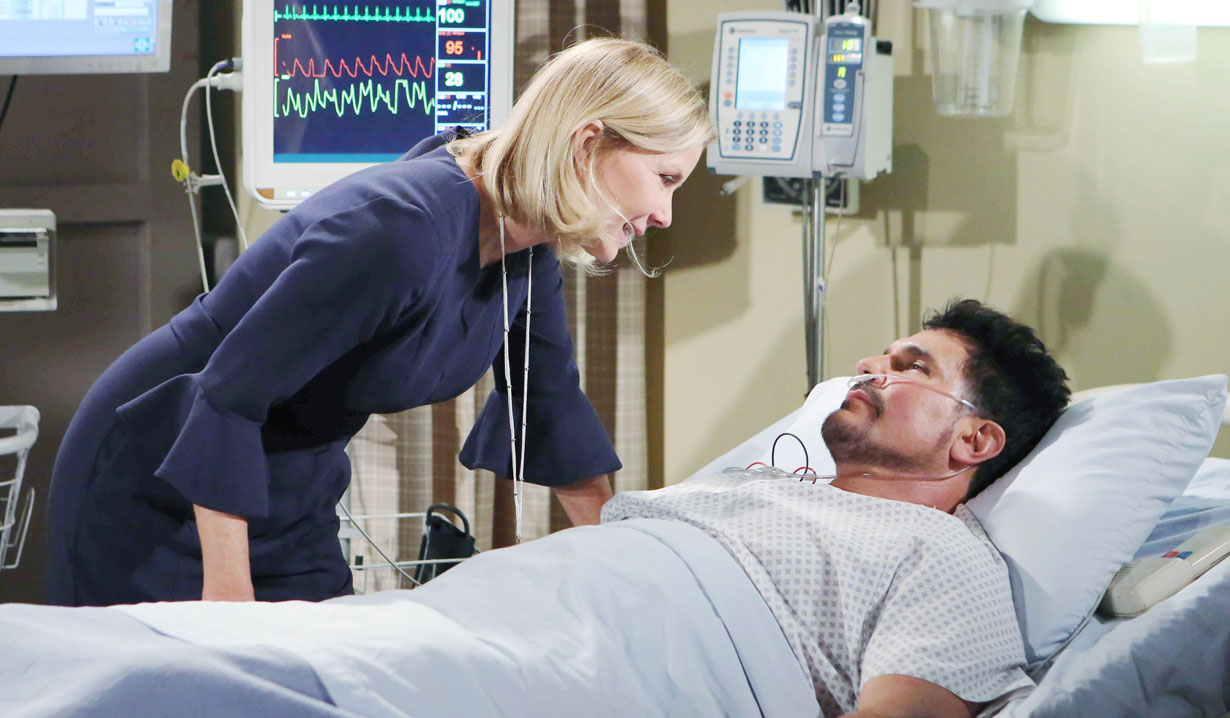 At the hospital, Liam, Wyatt, Thorne, Katie and Brooke wait for news on Bill. In Bill’s room, Ridge accuses a comatose Bill of being obsessed with him, which is why he has gone after Brooke and Steffy. Ridge hates him, but doesn’t want to see him like this, and orders him to wake up. The doctor and nurse enter, and the doctor asks Ridge to leave. He does, and the doctor goes into the hall and updates the family on Bill’s condition. Bill is showing signs of brain activity, which is a good sign. Thorne sneaks into Bill’s room as the doctor continues discussing Bill with the family. Thorne also urges Spencer to wake up and offers to do his best to get along with him for Will’s sake. Later, Brooke visits Bill as the doctor looks over him. When a nurse knocks over a tray, Bill’s vitals change, indicating he heard the noise. Brooke asks for a moment in private with Bill. Alone, Brooke lets Bill know she’s here and wants him to wake up and tell her that he’s okay. She tells him to come back to this room and to her. She reminds him of all their vacations together. Brooke takes his hand and he stirs awake. She cries that he came back and found her. At the Forrester mansion, Pam screams when Quinn’s foot goes through Stephanie’s portrait and ruins it. Pam accuses Quinn of hating her sister. Quinn denies that, and thinks there are tons of photos of Stephanie around the house to replace this one with. Eric fumes because this portrait was precious to everyone in the family. Quinn accuses Pam of trying to take her portrait down and erase her from this house, but Pam thinks Quinn is the one who has it out for her. Pam reveals to Eric that Quinn told Charlie that she was crazy and not to marry her. Quinn admits she thinks Pam is unstable and nobody knows what they will get with her from one day to the next. Eric asks Pam for some time alone with his wife. Pam makes it known she does a lot for this family, and even on her craziest day she’d never do to anyone what Quinn is doing to her. She leaves, and Quinn refuses to apologize for not wanting to see Pam married here. Quinn cries that she didn’t decorate this house, or pick out the furniture, and her portrait is the only thing that represents her in it. Eric reminds Quinn that she knew he had a big family when they married, and he thought she’d be a part of it and get along with them. She points out he knew who she was when they married too, and she’s so used to fighting for him that she’s forgotten what it is like to fight for herself.

Eric is in a no-win situation.

Quinn Puts Her Foot Through...

Eric's Surprised by Donna in...