Det. Sanchez Asks Ridge and Thorne If Bill Was Pushed off the Balcony

Wednesday October 24, 2018: Liam and Wyatt rush to the hospital, Det. Sanchez questions the Forrester brothers, and Quinn zeroes in on Charlie. 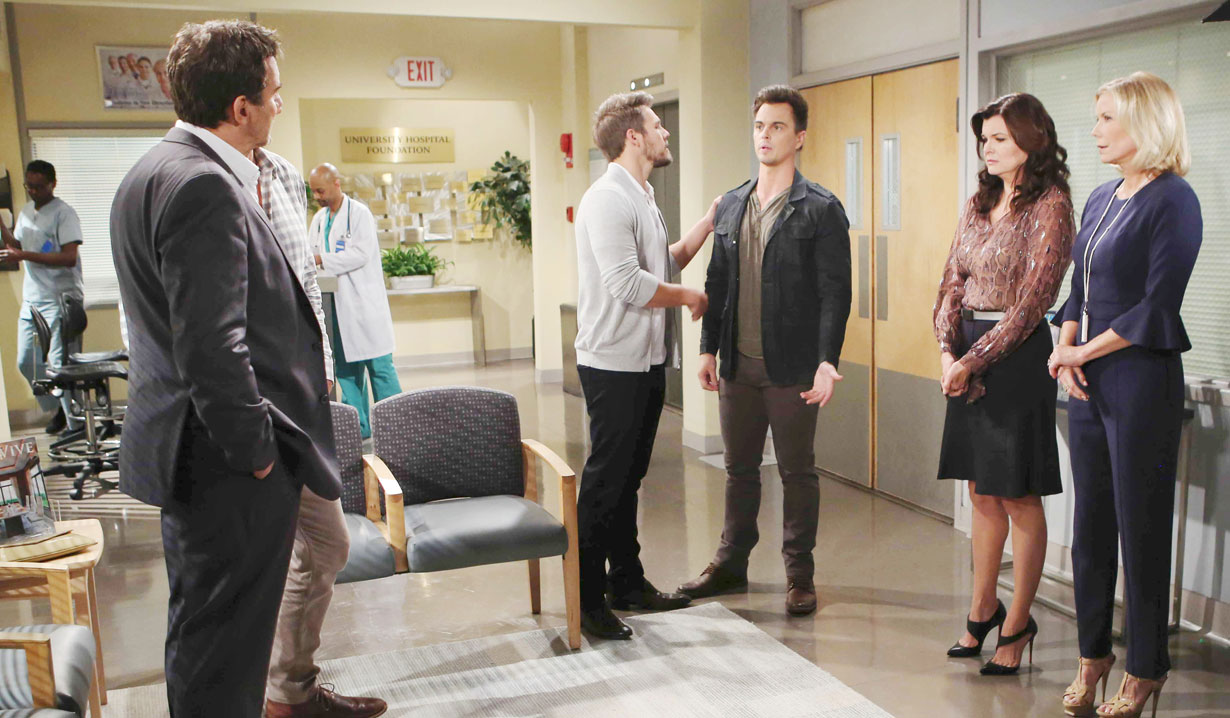 As Bill is checked out by the doctor in his hospital room, Ridge and Thorne continue to defend themselves to their wives in the waiting area. Liam and Wyatt rush in as the doctor comes out to say Bill is stable, but they’re waiting on tests and can’t assess the full extent of the damage until he regains consciousness. Katie goes in to see her ex. She tearfully begs him to wake up because both she and Will need him to be okay. She urges him to fight his way back to them. Katie returns to the group as Ridge tries to explain what happened to Wyatt and Liam. Wyatt is enraged by Ridge’s assertion that Bill incited the event. Liam heads in to sit with Bill as Wyatt steps to Ridge. Thorne defends Ridge, insisting it was an accident. Det. Sanchez arrives to question the Forrester brothers about Bill’s fall. Was it an accident? Or was he pushed? In Bill’s room, Liam forcefully orders his father to wake up so he can spend more time with his young son and granddaughter. Make that… granddaughters. Liam tells his father he’s having another girl and then explodes about how this is the only way he can talk to Bill—when he’s in a coma. He yells at him to wake up.

More: Jennifer Gareis back on contract as Donna

In Quinn’s office at Forrester, she is visited by Tyler and Brett, (played by Big Brother’s Brett Robinson and Tyler Crispen), who thank her with flowers for her donation to their fundraiser. Charlie enters with protected jewelry and the men leave. Quinn brings up Pam and wonders if Charlie is prepared to live with her darkness. He’s appalled by the suggestion, but Quinn says they both know Pam has issues. She lists Pam’s many crimes and encourages him to think long and hard before he goes through with the marriage. In the other office, Pam asks Eric if he wants her and Charlie to get married somewhere else. Eric insists he hasn’t changed his mind and promises Quinn won’t interfere with the wedding. Pam embraces him. Pam later meets up with Charlie in the lobby. She goes off about Quinn not wanting the wedding at her house. Charlie informs an incensed Pam that Quinn said she’s crazy and he shouldn’t marry her at all.

Quinn meets Eric at home. He questions her about Pam. She reminds him how she has put up with Pam’s disrespect because he considers her family, but she’s had enough and wants Eric’s support on this. Eric tries to defend Pam, but Quinn declares that her portrait will not come off the wall and Pam and Charlie will not get married in her living room.

Bill gets a visitor.

Quinn Puts Her Foot Through...