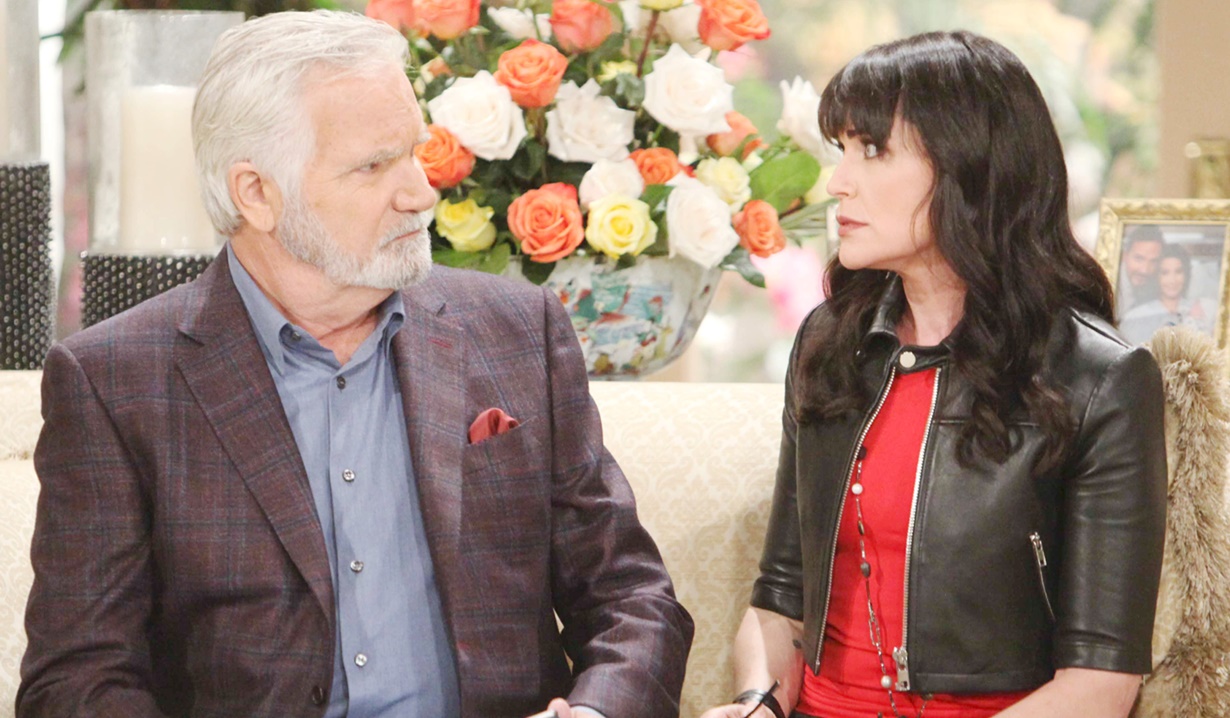 At Forrester Creations, Thorne commends Ridge for giving Will a chance at a better life by going to the judge; he’s grateful. Talk turns to Bill. Ridge tells Thorne that Bill’s been hitting on Brooke…Steffy walked in on them kissing right there in his office. He explains Brooke told him it would never happen again. Thorne complains she shouldn’t have been kissing him in the first place. Ridge warned her never to be around Bill again and rants about keeping Bill away from his family. Thorne wonders if Bill will pursue Brooke. Ridge insists if he appears, she’ll walk away. He won’t tolerate it.

At Il Giardino, Bill tells Brooke she’s incredible – whatever she said to Katie changed everything and now he has his son back. Brooke gasps when Bill admits this wasn’t a chance meeting, he tracked her down. He wants to know what she said to Katie. Brooke flashes to Ridge’s crime and says she just told her the truth. She relays that Ridge’s upset with him for kissing her. Bill smiles that Ridge knows there’s more to it. Brooke protests that she loves her husband, but Bill notes she jumped through hoops to change Katie’s mind. He intends to find out what she said to her. Brooke asks him to let it go, and excuses herself. Bill grins to himself.

At the Forrester mansion, Quinn and Eric puzzle over Charlie and Pam taking so long in the kitchen. In the kitchen, Charlie washes off Pam’s engagement ring as she laughs over him hiding it in the lemon bars. He kneels and asks Pam to be his wife. Pam responds that she’d love to be his wife. She kneels too, and they kiss. When they rejoin Quinn and Eric, Quinn doesn’t know what they were doing all this time, but Pam giggles that it was actually very…engaging. Quinn notices the ring and Pam busts out with the news. Eric and Quinn smile at one another before standing to congratulate the pair. Eric makes a toast and Quinn examines the ring, declaring it lovely, but noticing little yellow bits. Pam wants to get married in the mansion. Quinn asks, “In our living room?” Pam gushes she’d love it due to all the history in the home. Quinn suggests a destination wedding, but Pam persists…she wants to be married under Stephanie’s portrait, and adds, “The true matriarch.” Quinn snarks about her wanting to swap portraits, complains it’s too close to Christmas, and blurts out a bunch of other ideas, such as Medieval Times. Eric interrupts that he’d love to host the wedding there – they’ll make it a day they’ll never forget. Quinn’s expression is grim as Pam and Charlie thank Eric.

At Spencer Publications, Bill muses, “My boy’s back in my life, and all because of Brooke.” Brooke returns to Forrester Creations, flashes to both Bill and Ridge, then enters the office. Ridge asks her, “What’s wrong?” Brooke admits that Bill appeared at her table at the restaurant – he wanted to thank her and update her on Will. Ridge complains that Bill is poison to everyone, including Will, and is after her. He vows to end this as she insists he’s over-reacting. They hug but Ridge stews angrily.