Brooke Pleads With Ridge for Forgiveness 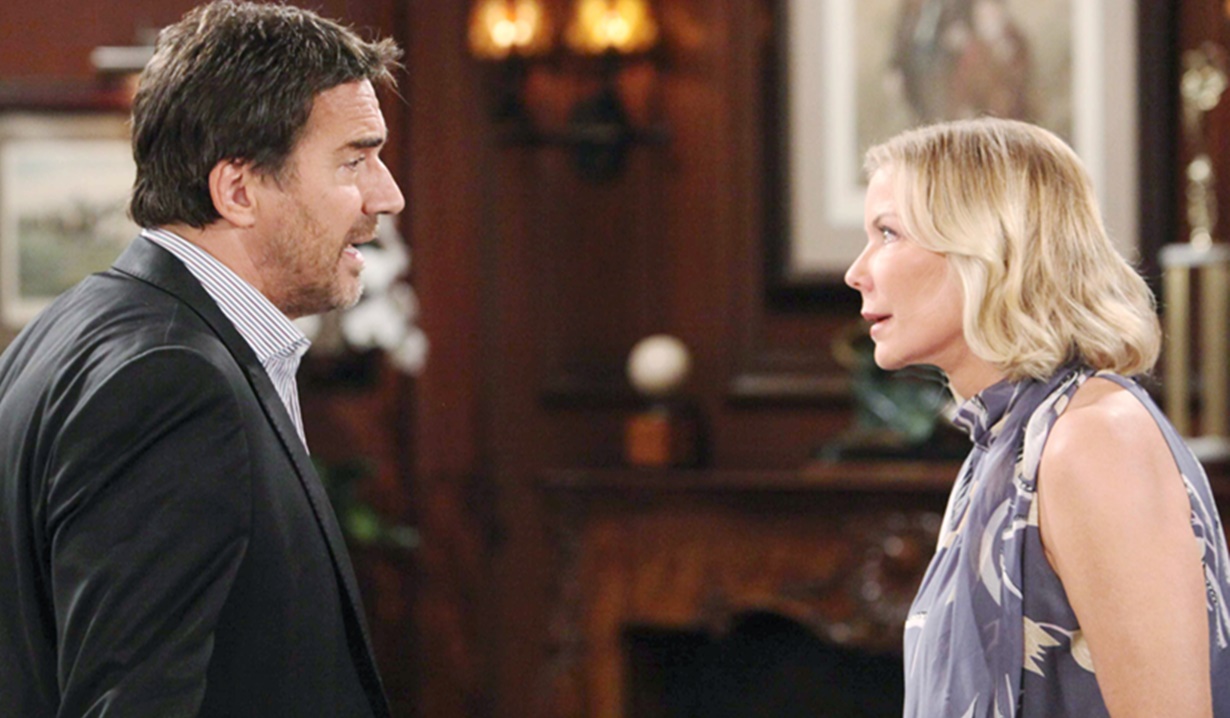 At Forrester Creations, Brooke acknowledges she made a mistake in not telling Ridge about Bill kissing her, and pleads with him not to let this ruin their marriage. She insists the kiss was on Bill’s initiative, not hers. Ridge relays that any other man and he could have seen past it, but he can’t understand her risking everything they have for Spencer. Brooke argues that she was supporting Bill because she thought it was right, and notes they kept secrets from each other. Brooke pleads with Ridge not to let this divide them, and asks him to forgive her. She goes on that she wasn’t disloyal, and she didn’t tell Ridge because she didn’t want the tension. Brooke moves in close and holds Ridge face – his are they only lips she wants to kiss her. Ridge sighs…there are still things they can’t talk about. He complains about Bill, but knows she regrets what happened. Ridge says she’s his life, and they embrace. Ridge warns her not to let Bill anywhere near her again. In the studio, Hope lets Steffy know she’s pleased that Wyatt’s returning to the company. Steffy alludes to not being so happy about something else…which has to do with Hope’s mother. Hope worries it has to do with her line, but Steffy reiterates it’s about Brooke and the way she treats her marriage. Hope defends her, and Steffy blurts that she caught Bill and Brooke kissing in the office. Hope thinks she must be mistaken, but Steffy saw it with her own eyes – they were kissing. Hope reels, and muses, “My mother…and Bill Spencer.” Next, Hope decides Bill must be to blame, but Steffy reminds her Brooke supported Bill through the custody hearing. Hope learns Steffy told Ridge about the kiss and was furious.

At Spencer Publications, Bill sets up an opportunity for Will to meet a sports team over the phone, then disconnects as Wyatt appears. Bill’s pleased when Wyatt announces it’s time for him to get back to work, but his face falls when Wyatt adds, “At Forrester Creations.” Bill rants that Wyatt would rather work alongside ‘the Dressmaker’ than with his own father. Wyatt recalls how things went between them when he left, and tells him Steffy made him an offer he couldn’t refuse. Bill decides he accepts Wyatt’s decision, which puzzled Wyatt. Bill notes he’s trying to be a better father, then adds that Katie isn’t enforcing the custody agreement – she’s letting him see Will whenever he wants. Wyatt wonders what made her change her mind. Bill says it wasn’t ‘what’ it was ‘who’ – it was Brooke. He reveals that Brooke was in his corner from the beginning and after the hearing, she didn’t give up – something she said made Katie change her mind. Wyatt didn’t realize Brooke and Bill were that close again. Bill talks about meeting Brooke behind Ridge’s back. Once alone, Bill flashes through romantic moments with Brooke and smiles.

Brooke is confronted by Hope.