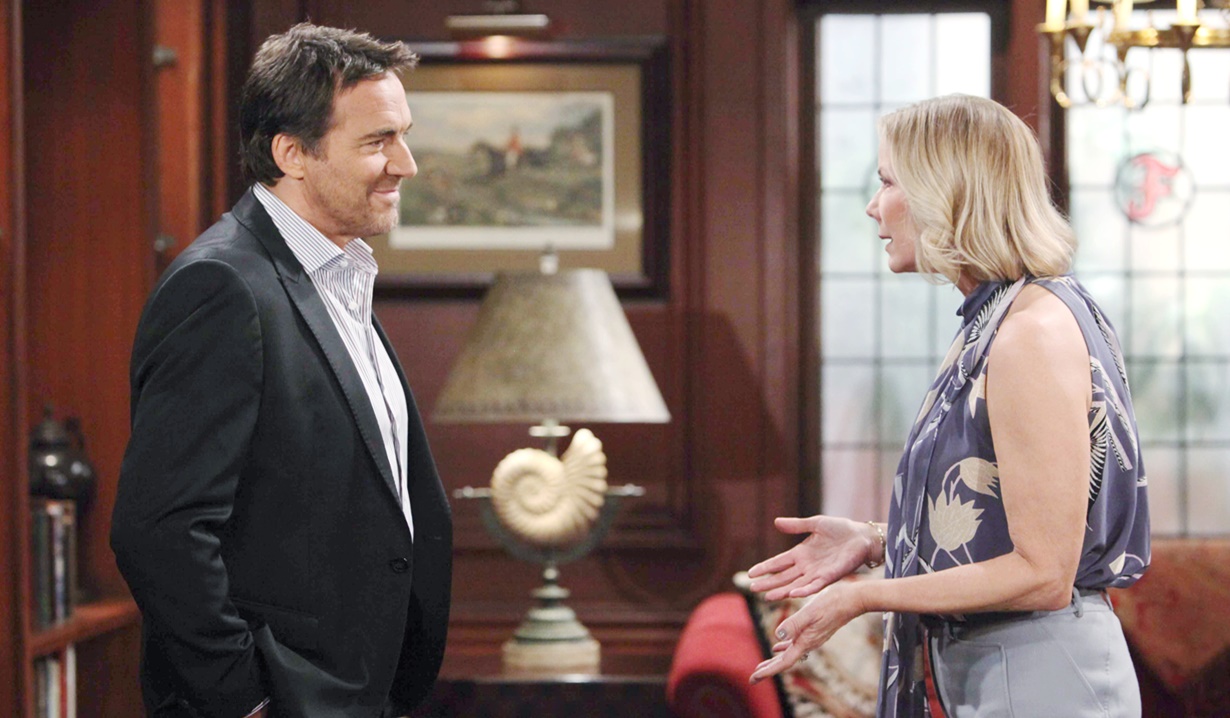 At Spencer Publications, Bill talks to Will about his social studies homework and investing, and Katie laughs at Bill referring to himself as ‘King of the World’. Bill continues, educating Will about and taxes as Katie flashes to Brooke insisting she has to do what’s right. Alison buzzes Bill, who reminds her he’s not to be disturbed when Will’s there. When Katie advises it’s time for Will to go meet his buddy, Bill gives the kid $100 and offers to walk him out. After Will’s gone, Katie rejoins Bill in the office, and he thanks her. Katie admits she’s seeing things a little differently after the hearing. She vows not to get in the way of him seeing his son. Bill’s stunned as he thought that was her intention. Katie sets a few ground rules regarding Bill canceling and admits Brooke got her to see the situation in a new light. She thanks Bill for wanting to be Will’s dad again.

At Forrester Creations, Ridge continues his cryptic conversation with Brooke about Steffy seeing her in the office with Bill, until he finally comes out and confronts her about them ‘making out’. Brooke scoffs that Bill kissed her and she put a stop to it – Bill made a mistake. Ridge asks what she did, and she blurts that she told him before it could never happen again. Ridge realizes this wasn’t the first kiss, and Brooke reveals Bill kissed her while visiting his office regarding the custody suit. Ridge is angry that she didn’t tell him. Brooke apologizes, but knows it makes him unhappy. Ridge says she has no idea. Brooke’s sorry and wants to move on, but Ridge thinks she only regrets getting caught. Ridge complains a man who hates him put his hands and lips on her. Brooke insists Bill was just expressing his gratitude. Ridge rages he should have sent a greeting card, and wonders what he was thankful for. Brooke alludes to talking to her sister on his behalf. They bicker about what they both did surrounding the custody issue. Ridge learns Brooke told Katie about his coercion. Talk turns back to Bill, and Brooke feels he didn’t intend to cause problems. Ridge is furious about her defending ‘that animal’ Bill and seethes that he played her. He informs Brooke she’s free to marry Bill if that’s what she wants. Brooke, taken aback, appeals to Ridge to try and get past this; they can make it work. She adds, “It’s not over,” and wants to know Ridge believes the same thing.

Bill faces yet another loss.

Ridge Confronts Brooke About Her...

Brooke Pleads With Ridge for...