Ridge Confronts Brooke About Her Secret With Bill 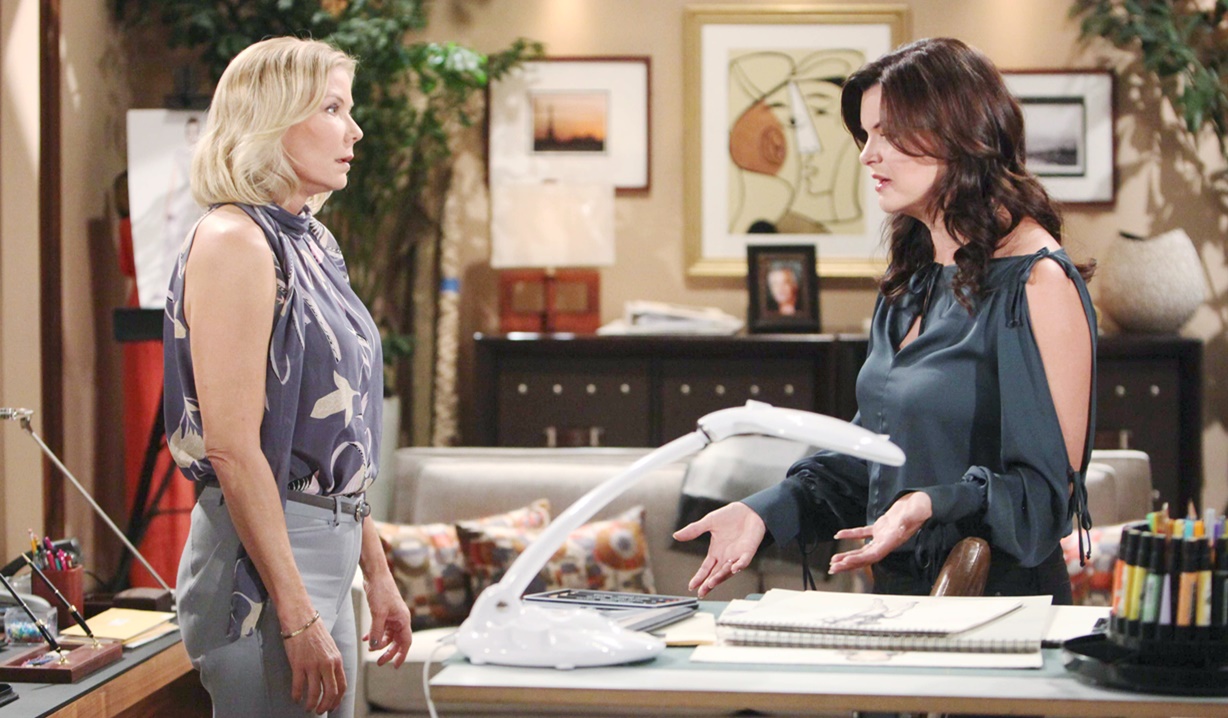 In the Forrester Creations main office, Steffy confirms to her father that Brooke and Bill kissed. Ridge muses, “Spencer and Logan.” Steffy relays she gave Brooke an opportunity to come clean, but she didn’t. Ridge can’t believe Brooke could do this with Bill of all people given how he feels about him. Steffy asks what he’ll do. In the design office, Katie cannot believe what Brooke is telling her, but Brooke affirms that Ridge coerced the judge into giving her custody. Brooke warns an incredulous Katie that she can’t tell anyone…especially Bill. Katie stammers that she can’t keep this from him, but Brooke insists Katie can fix this without the courts or anyone else. Katie muses that she’d also be protecting Brooke’s husband. She notes how passionately Brooke defends Bill and feels it’s obvious she still cares about him. Brooke insists she sees both sides and says they need to act to make things right. Katie realizes she would have to make an overture toward Bill and keep Ridge’s crime a secret. Brooke understands she’s conflicted, but feels she must go to Bill knowing what she knows now. After, Brooke rejoins Ridge in the main office. He intones, “I know you were with Bill.” Brooke learns Steffy saw them, and assures Ridge she didn’t tell Bill he influenced the judge. She rants that Ridge went too far. Ridge muses that all her energy’s been focused on Spencer and now he knows why. He asks, “You and Spencer, really? How could you do that to us?”

In the Forrester Creations studio, Wyatt announces to Quinn that Steffy offered him a job and he accepted. He’s puzzled when she doesn’t jump for joy. She admits she doesn’t necessarily see it as good news. Wyatt yelps – he doesn’t get it! Quinn reveals she’s pulling his leg and is actually ecstatic. She squeezes him in excitement. Quinn enthuses that they can take breaks together every day and Wyatt teases that he may have to rethink this. She agrees not to embarrass him and thinks there’s probably a plucky redhead even happier than she is. Quinn asks if he’s told Bill he’s choosing Forrester over Spencer so soon after him losing custody of Will. Steffy joins them and Quinn gushes her thanks until Wyatt ushers her out. Wyatt has some ideas, but Steffy’s distracted. She admits it’s about Brooke and his father.

At Spencer Publications, Bill tells Justin he’s still mystified as to how the judge could have ruled in Katie’s favor. Justin hopes if Brooke keeps working on Katie maybe she’ll agree to change the arrangement. Bill figures that’s Justin’s way of urging him not to give up on Brooke and vows he won’t. Bill has Justin get some tickets for him and Will. Bill grunts that he’ll have to call and clear it with Katie first. Justin advises he doesn’t have to impress Will with rollercoaster or football tickets. Bill’s just trying to do right by him. Later, Katie arrives with Will.

Bill receives an offer from Katie.