Tuesday October 9, 2018: Brooke tells Ridge the truth must come out, Bill has a question for Katie, and Steffy questions her father. 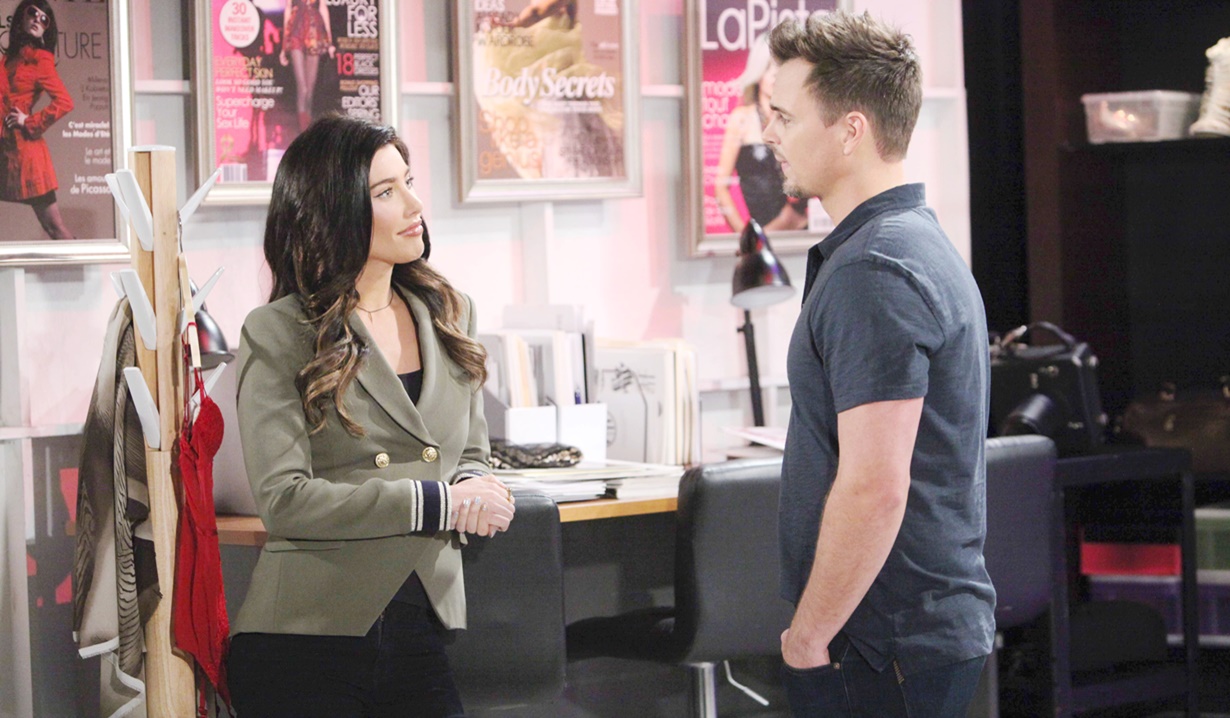 At Forrester Creations, Brooke hisses at Ridge, “You bribed a judge.” Ridge protests, but Brooke carries on that he manipulated their lives and Bill’s relationship with his son will never be the same. Ridge thinks she knows deep down that Will is better off with Katie and Thorne. Brooke snaps that was not for him to decide. She can’t believe what he’s done. Ridge recaps his relationship with Judge McMullen. Brooke sneers that he made a big return on his investment. They argue about Bill and Ridge defends his actions. Brooke calls it payback and she won’t accept it – the truth has to come out. They debate whether the judge felt pressured. Brooke is appalled by what Ridge did – he could go to prison. Ridge warns her to leave it alone. In the studio, Steffy runs into Wyatt amid the racks of lingerie and guesses he’s looking for Sally. Wyatt actually had something to say to Steffy first. He talks about what a great job they’re doing with the intimates line – Steffy’s impressed him, and he thanks her for giving Sally an opportunity. Steffy muses she’s been thinking about Wyatt, and he jokes that he knew it was only a matter of time before she asked him to model the bedroom line. Steffy recalls what a great job he did of building their social media and asks him to return to work. Wyatt heartily accepts the position of social media manager and agrees to start immediately. Steffy looks forward to working with him again and teases about him working with Sally – maybe he’ll be an inspiration. Ridge appears and Steffy updates him on rehiring Wyatt. After Wyatt’s gone, Steffy senses something’s off with her father – she asks if he’s having issues with Brooke.

At Spencer Publications, Bill and Will talk about video games and math homework. Will parrots, “The more 0s the better.” Bill is proud as a peacock, and Katie murmurs, “Oh my God…” Bill shows Will their next visitation day on the calendar – they’ll hang out all day and do whatever Will wants. Bill chortles it will be the highlight of his week – he doesn’t want anyone to question how much he loves him. Katie’s moved. After Will leaves the office, Bill chats with Katie about attending some parenting functions. She offers to sign him up to go in the dunk tank at the Spring Fling. Bill doesn’t blame her for wanting to see him dunked. Katie giggles over Bill wanting to pick Will up in the carpool lane with the regular folks. Bill turns serious; he just wants to be with Will, and asks her to reconsider the custody order. Katie rehashes that Will needs a schedule and order. Bill wants more than a day here and there. Katie wants to stick with the judge’s ruling for now.

Bill finds Brooke at Forrester Creations, and updates her on the great visit he had with Will. He adds he asked Katie to reconsider the custody arrangement, but she wants to respect the judge’s decision. Brooke’s sorry. Bill admits he’s struggling; he can’t understand the judge just taking away his parental rights, and asks how that could happen. Brooke says, “I could tell you exactly why the judge ruled the way he did.”