Hope Doubles Over With Abdominal Pain

Friday August 31, 2018: Bill warns Katie about going to war with him, Ridge declares that Thorne's off the market, and Steffy still has feelings for Liam. 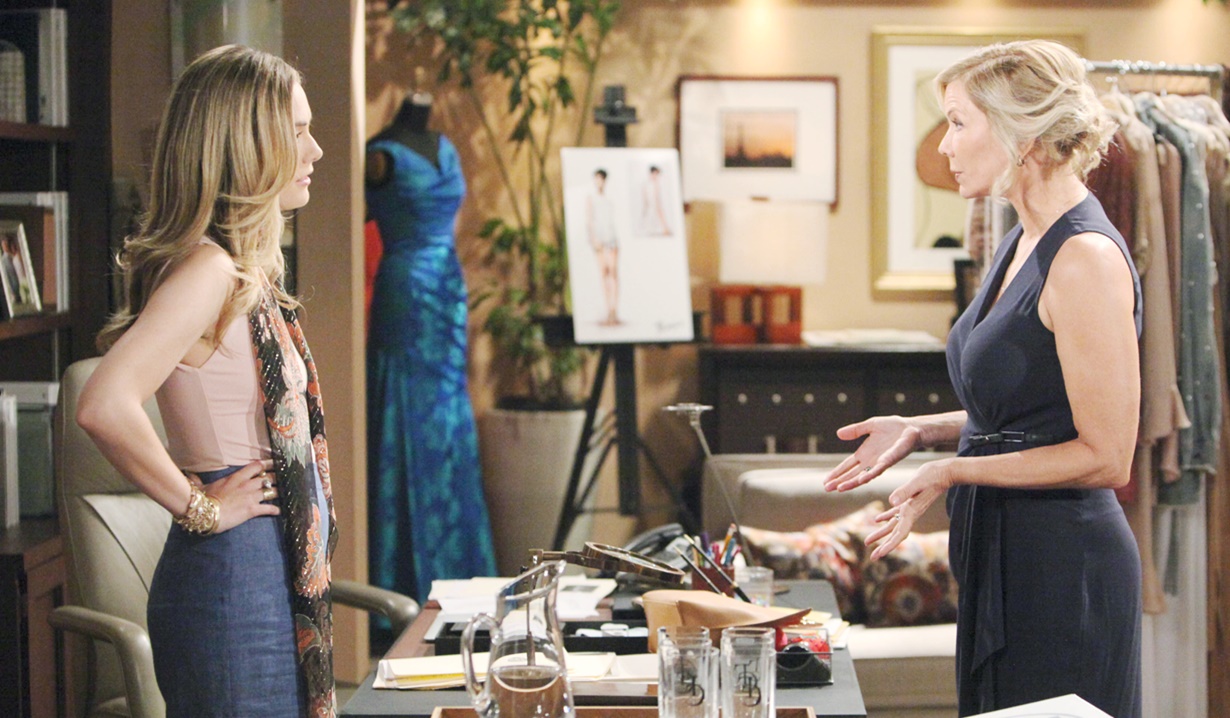 As Ridge and Thorne work with two models at Forrester Creations, they bring up rumors that Thorne’s dating someone. Ridge confirms he’s off the market. The models file out and Thorne tells Ridge he likes where things are heading with Katie. He also likes her kid, which is why he’s helping her do the right thing. They complain about Bill. In the design office, Hope assures Brooke that she’s not worried about Steffy and Liam; Steffy has moved on. Brooke’s just worried about Hope in this complicated situation. Hope admits it’s sometimes frustrating, and turns the conversation to her happiness following the ultrasound – it’s a reminder of what really matters. Brooke wants this for her; she’s waited so long for this and it’s finally here.

At Katie’s house, Bill is appalled that she thinks taking his son away is what’s best for Will. Katie is re-establishing boundaries and taking charge, and restates that she’s going for sole custody of their son. Carter pipes up that Bill’s in violation of the current custody agreement. Bill warns if Katie does this, she’ll regret it for the rest of her life. Carter tries to intervene again, but Bill shouts that it’s between him and Katie. Carter leaves. Bill can’t believe Katie wants to cut him out, which will screw Will up even more. Katie doesn’t want to cut him out but doesn’t see any other options. Bill wants to figure this out between them – there’s no way in hell he’ll let her take his kid from him. Katie wants Bill to hang out with Will at her place, according to her schedule. Bill argues and grumbles about Thorne thinking he’ll take his place – he knows this was all his idea. Bill urges her to tear up the papers. Katie reminds Bill she wanted them to be a family, and tries to make him understand that Will now feels rejected. Bill thinks maybe Katie feels rejected. Katie won’t back down, and insists she made the decision on her own. Bill tells her if she goes to war with him, she’ll lose.

At the cliffhouse, Steffy and Liam are relieved that Kelly’s fever is improving. They rehash Steffy’s decision and Liam’s proud of her. Steffy tells him that even though she stands by her decision, her feelings for him haven’t just gone away. Liam calls the doctor, who says they don’t need to bring Kelly in today. After, they gush about their adorable baby, who’s also a tough cookie, and celebrate getting through her first fever. Steffy reiterates she still loves him and it’s important Kelly sees that. She recalls when Liam forgave her – if only Bill hadn’t interfered, and things had ended up differently.

Carter arrives at Forrester Creations and updates Thorne and Ridge that Katie filed for full custody, though Bill didn’t take it well. Thorne says he’ll do everything possible to protect Katie and her son.

At the cabin, Hope looks at the ultrasound photo, remembers telling Liam she was pregnant, and them getting married. Suddenly she gets a terrible pain in her abdomen and gasps, “Oh my God!”

Hope and Liam rush to the hospital.

Bill's Outraged As Katie Files for...