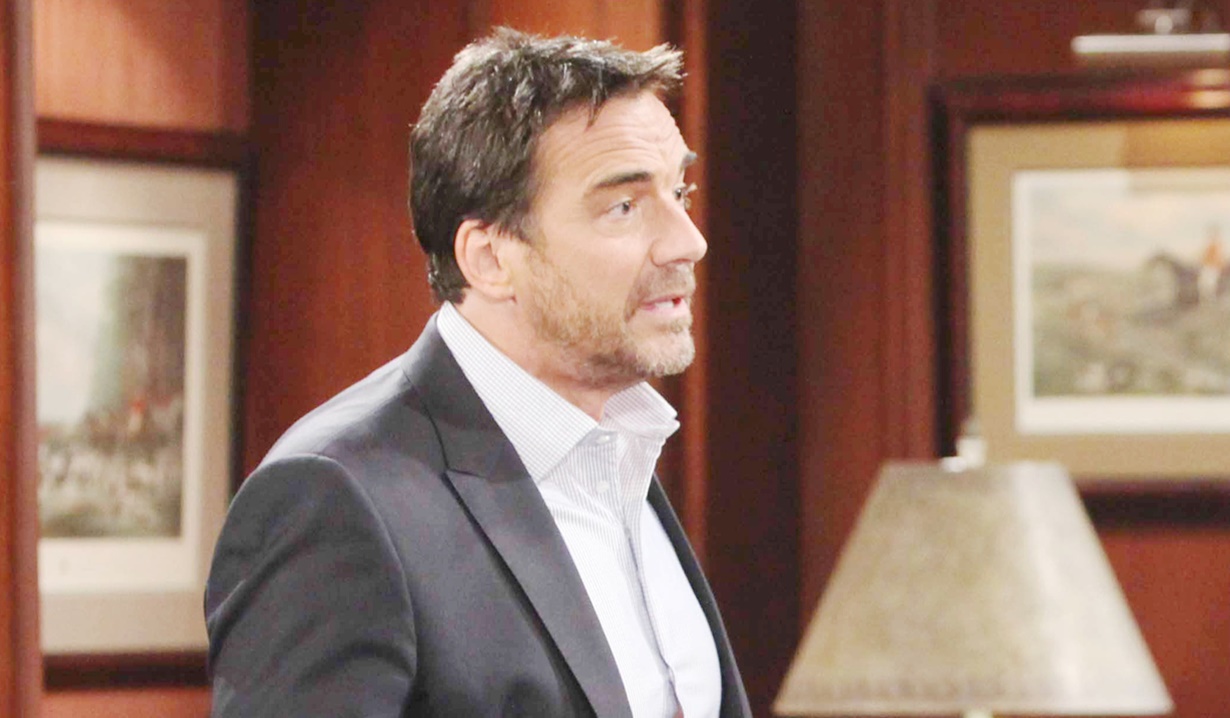 At the beach house, Wyatt and Liam come in from surfing. Liam still can’t believe that Steffy’s marrying Bill. Wyatt reveals that he refused to attend the wedding. Liam says Ridge wanted him to try and stop it – he probably should have tried given that he’s the reason for it. He’s puzzled at Steffy turning to Bill after all he did; it’s not the Steffy he knows and loves. Liam doesn’t want Kelly around his father – he’s toxic. They speculate whether Steffy may have come to her senses for her and Kelly’s sake. Wyatt asks, “What about yours?”

At Forrester Creations, the executive staff, and Pam, has gathered. Eric asks if anyone knows why Steffy called this meeting. Ridge confides to Brooke that he’s worried. Steffy appears and says, “Good morning, everyone. I have some big news I want to share.” She tells them Forrester Creations is a fully family-owned company again – she has Bill’s shares. Ridge figures she married Bill, but Steffy surprises him by saying she didn’t. Everyone wants to know what’s going on. Steffy reveals she’ll be coming back to work and will reinstate the bedroom line – she’ll be the head model and spokesperson. Brooke asks about Hope for the Future. Steffy says the numbers have been excellent and she sees nothing but bright things ahead for Hope. Eric and the others ask about her and Liam. Steffy states it’s just her and Kelly now. Pam assures Steffy that Stephanie is smiling down on them, and Eric welcomes her back. Ridge, beaming, goes to a conference call. Hope asks Steffy if Liam knows she didn’t marry Bill. Steffy wants to tell him herself. Hope’s proud of her. Steffy says that means a lot. In the studio, Emma reveals to Xander she’s still upset about Zoe modeling the showstopper – at least they don’t have to worry about her anymore. They kiss. Xander exits, and Maya appears. She notes Emma’s really into her cousin, and Emma’s smile confirms it. Maya wonders if she feels threatened by Zoe. Emma feels Zoe had no right coming there, but thankfully they’ll never have to see her again. In the design office, Brooke tells Hope she can’t help but think what Steffy’s news means for her and Liam. In the executive office, Steffy calls Liam to come over. Ridge enters. Steffy explains her decision to him. He’s relieved to hear Bill won’t be around anymore. She thanks her dad for his guidance; she’ll focus on Kelly and her career. Ridge is pleased his granddaughter has such an amazing role model. They express their love.

Xander arrives at Zoe’s apartment where she’s in a swimsuit and flirts. She doesn’t think he really wants her to leave L.A. Zoe admits she didn’t handle things well; she just loved him so much. She didn’t mean to cause him trouble. Zoe offers to leave if he wants her to, but reiterates she still loves him. Xander concedes he didn’t just move away and stop thinking about her, but still feels it’s best she leave for now. They embrace.

Ridge is irritated by Brooke’s suggestion.

Steffy Chooses Herself Over Bill &...