Thursday July 5, 2018: Eric and Quinn are happy for Steffy, Ridge is concerned about Hope, and Liam assures Hope their baby is a gift. 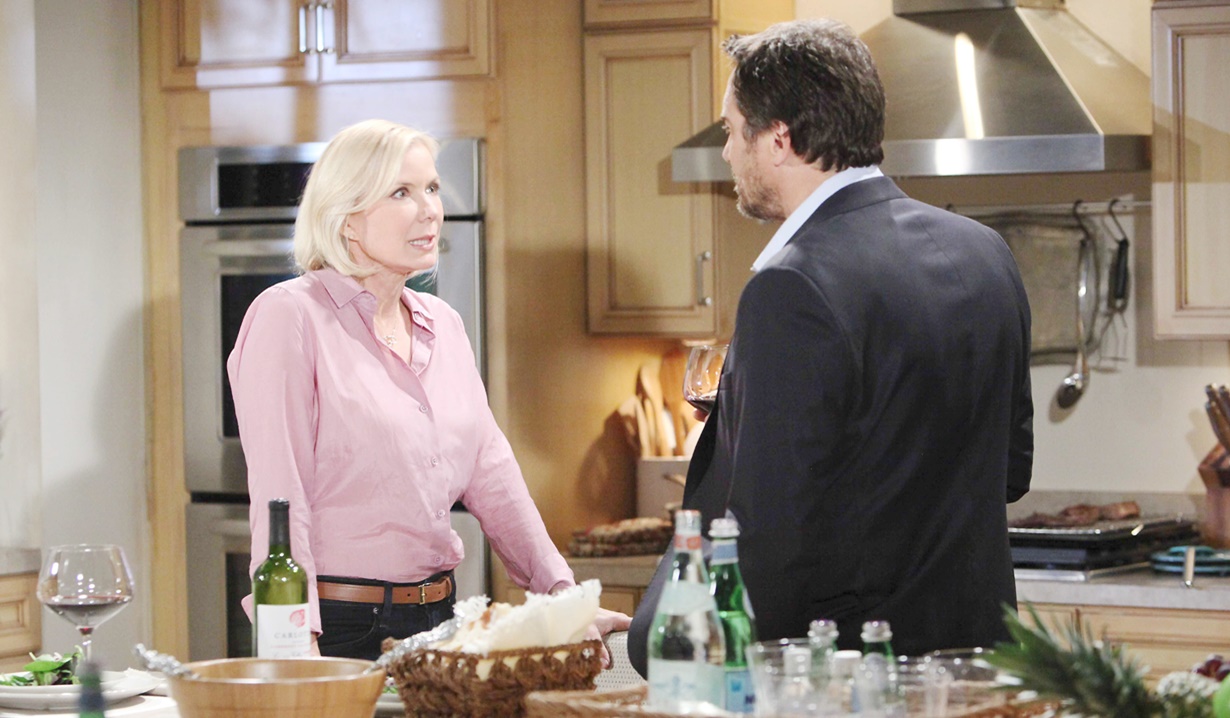 At the cliffhouse, Steffy tells Eric and Quinn she is grateful to have her family together at last. Eric wants to sneak in the bedroom to see Kelly, and notes Ridge must be thrilled to know nothing’s standing in the way of her happy future. Quinn asks where Liam is, and learns he’s still at Forrester. They discuss how it’s inadvisable for Liam to be spending time with Hope. Eric says the website will be done soon enough. Steffy agrees – then Hope can move on. Quinn admits she was surprised Steffy stalled on the wedding, but Eric wasn’t, given she’d just had a baby. Steffy reveals she’s ready to proceed. Eric grins – Liam’s going to be so happy. He murmurs, “Beautiful, beautiful family,” and embraces Steffy. After Quinn and Eric visit with Kelly, they tell Steffy she and Liam should be very proud. Steffy couldn’t be happier – there’s nothing but love in this house.

In their kitchen, Ridge digests the news that Hope’s pregnant. Brooke knows he’s worried about Steffy, but Ridge surprises her by countering, “No. I’m worried about yours.” He mutters that this is all on Bill Spencer, who spun his web of lies. Ridge assures Brooke that they’ll support Hope as a family – it’s going to be devastating for her to watch Liam and Steffy live their lives happily – he’s concerned about her. Ridge embraces Brooke and assures her again they’ll be there for Hope and help her get through it. Brooke coolly says she appreciates his concern, then points out Liam and Steffy aren’t married yet and everything’s changed. Ridge realizes she believes Liam’s not going to marry Steffy.

At Forrester Creations, Hope acknowledges that her pregnancy is a bit of a complication. Liam thinks that’s an understatement. When asked, Hope assures him she’s fine and already in love with this little innocent life. Liam marvels, “A baby. We’re having a baby.” Hope tells him about her visit to the doctor. She admits part of her feels terrible for the position it’s putting him in. Liam notes it takes two – he doesn’t blame her – but it’s a lot to wrap his head around. Hope cries happy tears about getting to be a mom again – he has to know how much that means to her. Liam nods. Hope expresses she loves him so much – they made love that night and she won’t apologize for this baby. Liam isn’t looking for apologies. Hope knows they’ll love their child, but doesn’t know what this means for the two of them moving forward. They agree they’ll be a family and make this work. Liam cautions they have to be logical about it. Hope says this has been her dream, but she doesn’t expect him to feel the same way. Liam knows this will complicate their lives, but it will also bring them incomprehensible joy. He tells her no guilt – this is an amazing gift. They embrace.